Mona Shores senior Mike Meekhof of M7 Sports has long had his eyes on becoming a sports journalist for a major network. 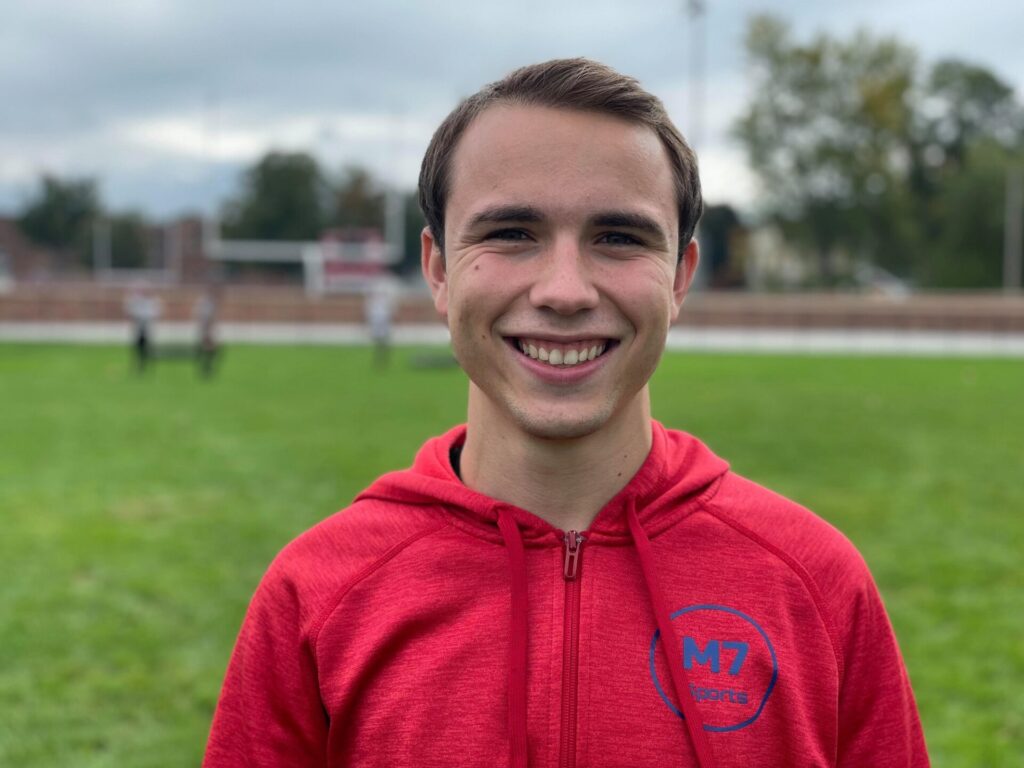 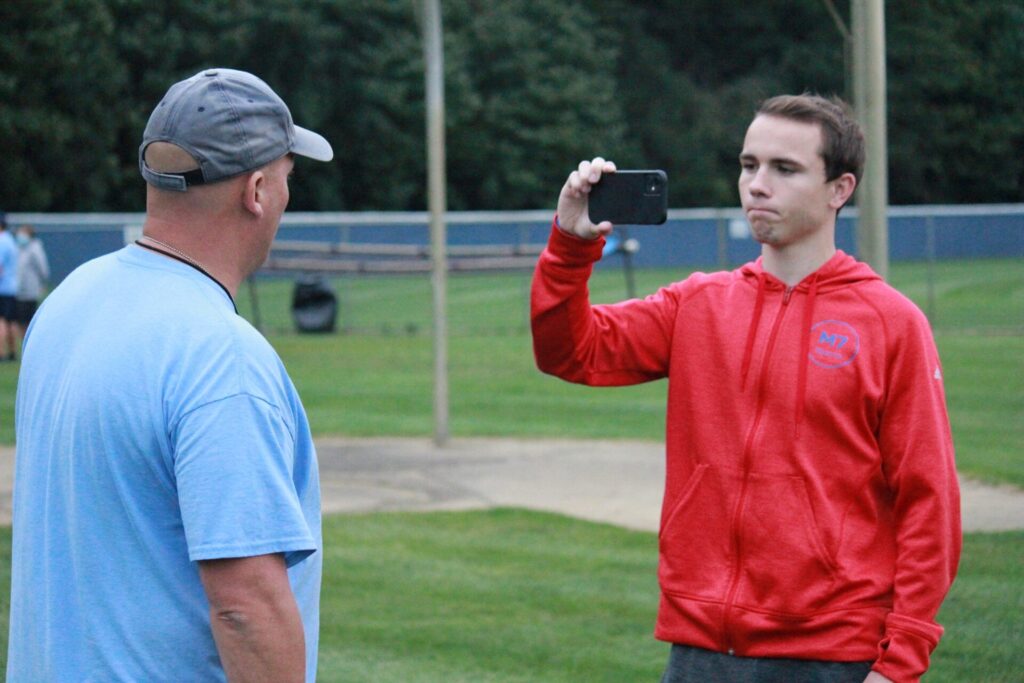 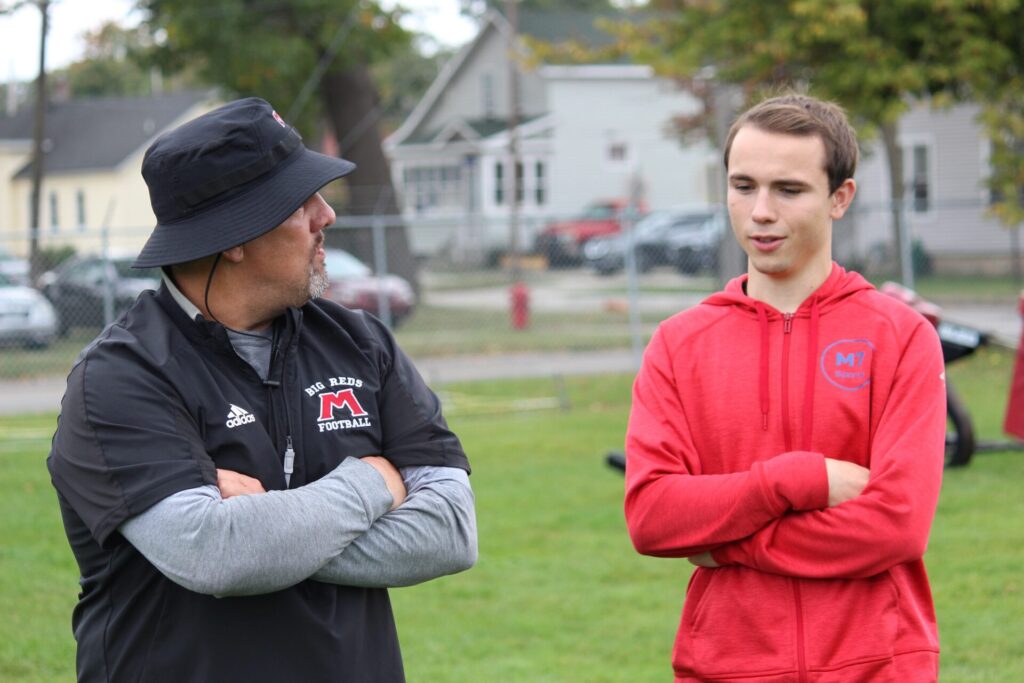 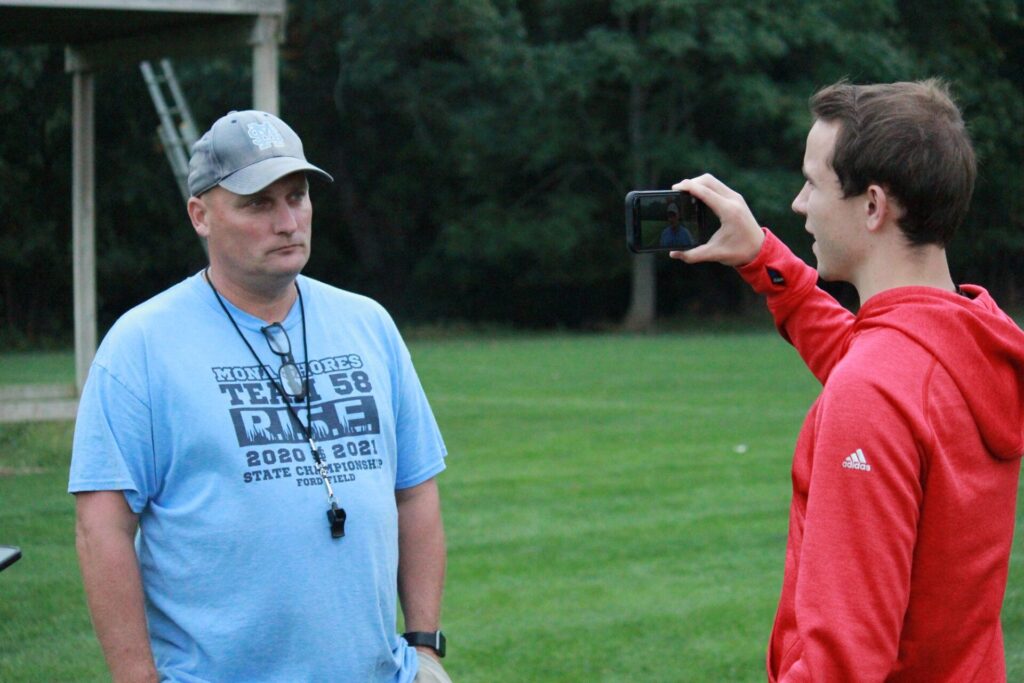 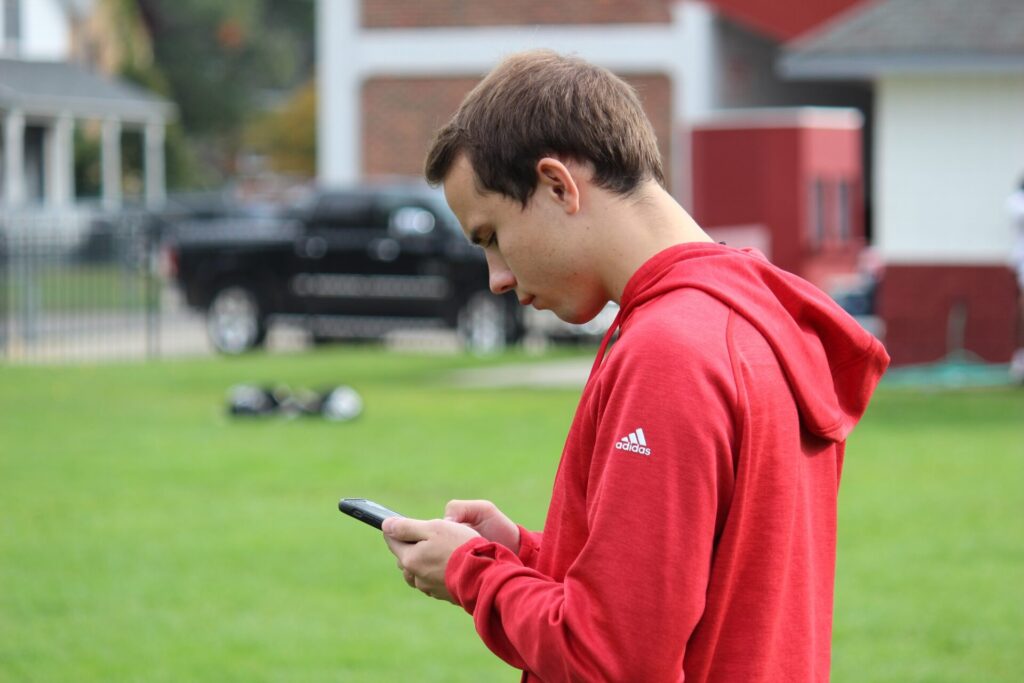 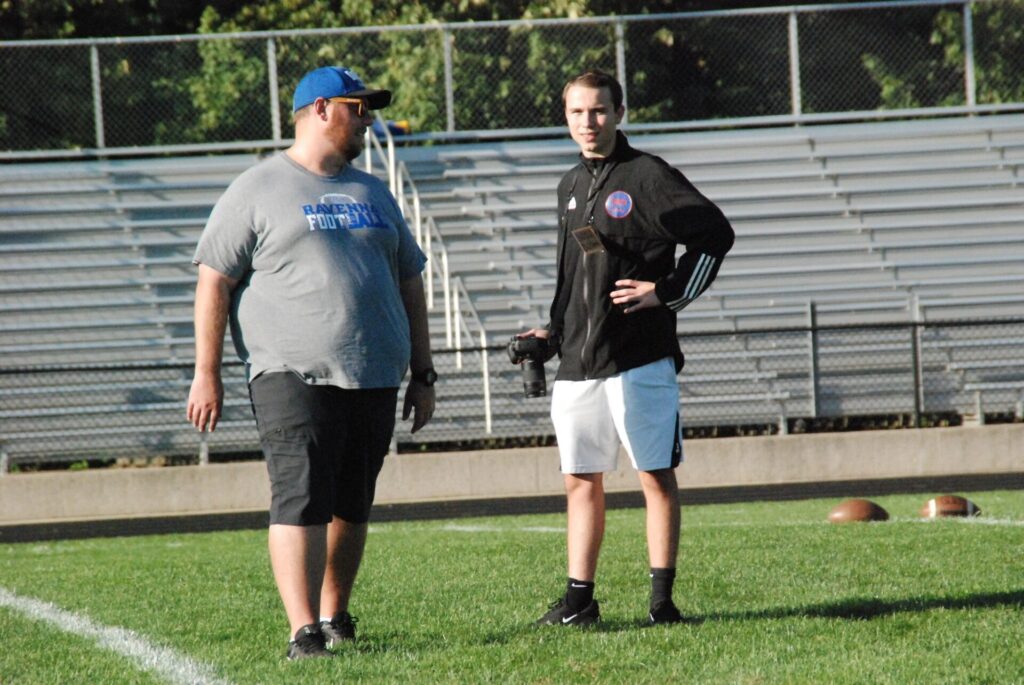 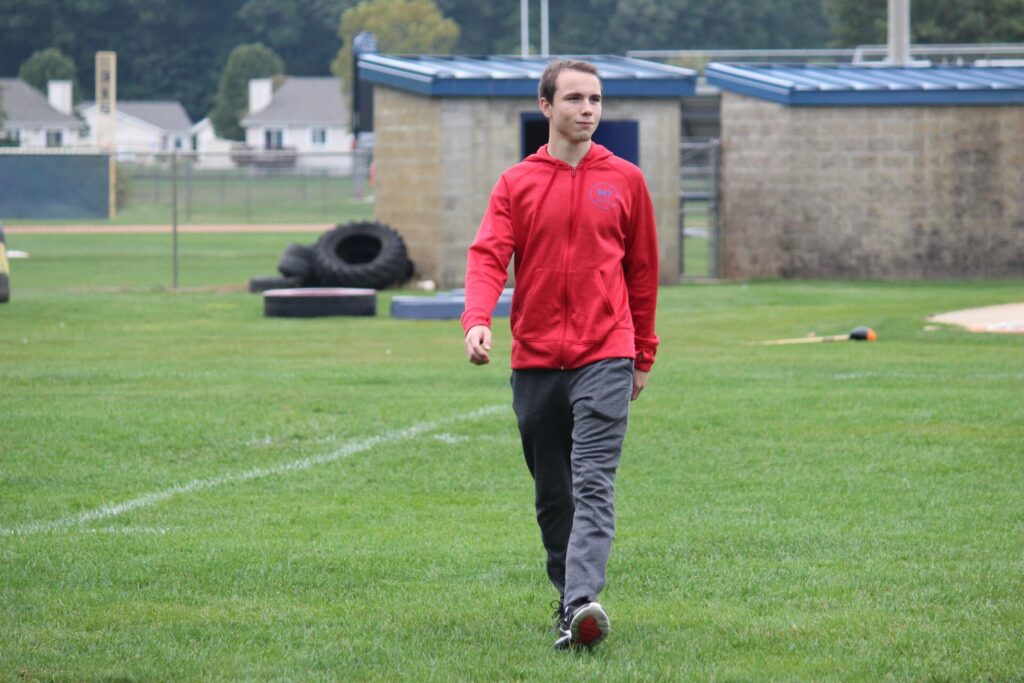 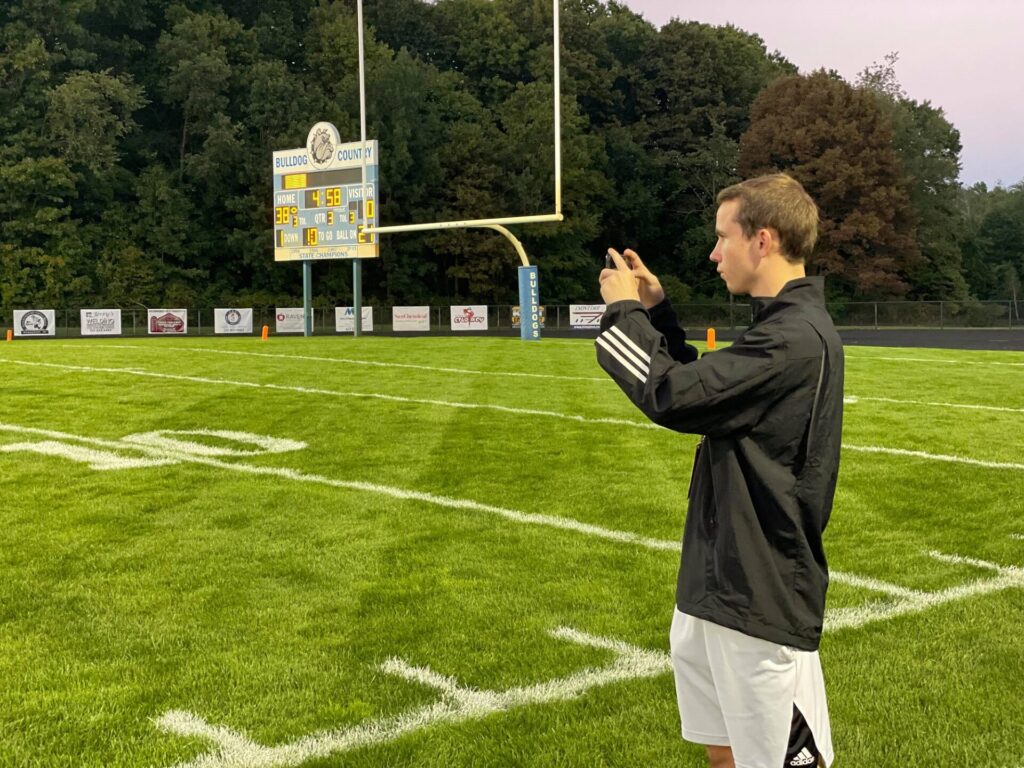 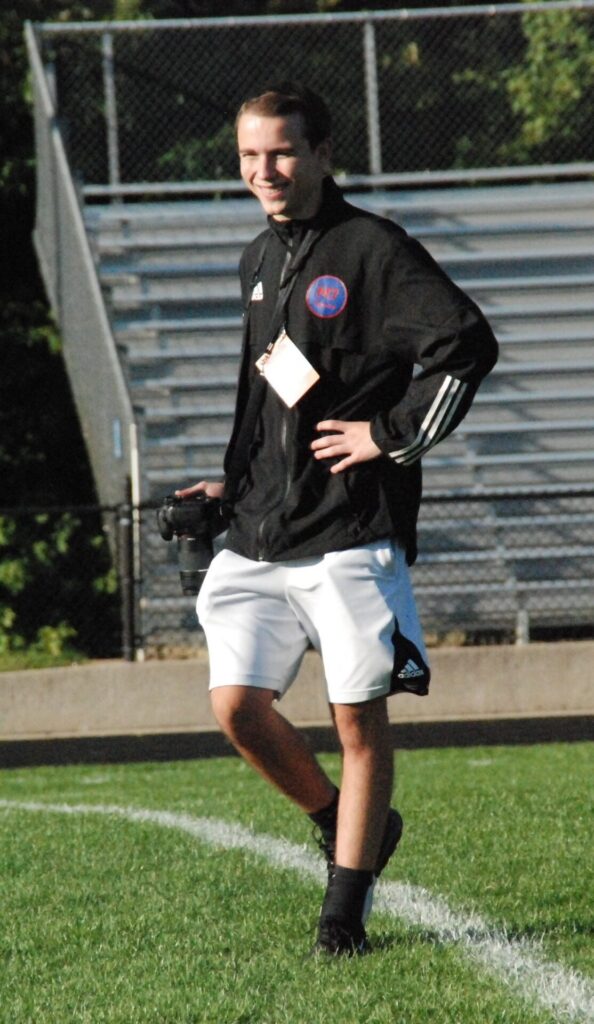 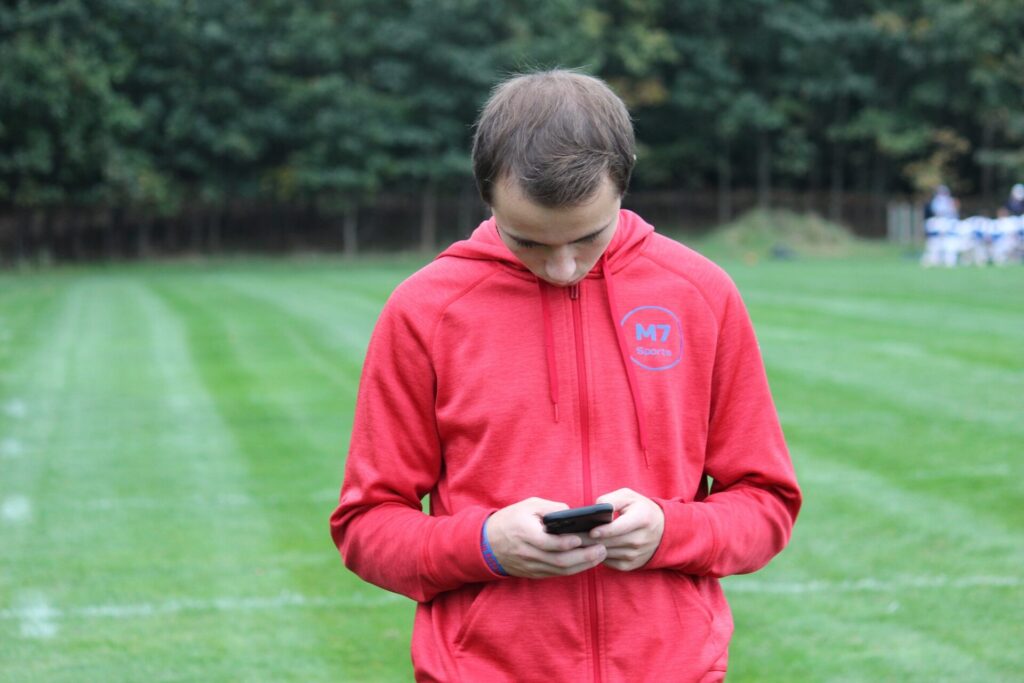 The seeds were planted long ago for Mike Meekhof in his pursuit of becoming a sports journalist at a major network.

One moment, he was sitting on a SportsCenter set at ESPN Wide World of Sports. Another time, he received framed photos from Steve Mariucci along with the following words of encouragement: “Follow your dreams.”

Three years ago, the ambitious, determined and independent Meekhof dared to tackle those dreams head-on as a 15-year-old high school freshman, who launched his own local sports media company.

Now a senior at Mona Shores, he has transformed the M7 Sports venture into his very own brand. It’s one that boasts more than 1,800 likes on Facebook, nearly 800 subscribers to his YouTube channel and several volunteers who canvas the Muskegon area covering high school football and basketball games in producing popular highlights and interview videos.

“At first, it was just about promoting some of my friends that I didn’t think were getting as much coverage as they should be, but then as I got into it more, it became a passion for me and I want to make this my career,” said Meekhof, the son of Matt and Jennifer Meekhof.

“I want to go into sports journalism. I just really loved the relationships that were made along the way, just with coaches and players, and I know 100 percent this is what I’m going to do for the rest of my life.”

Calling Meekhof a “go-getter” might be the understatement of the year.

Jennifer Meekhof said that since her son was a young age, if he discovers something that interests him and he wants to pursue it, nothing’s going to stop him. On the flip side, if something does not really intrigue him, it’s much more difficult getting him to focus, she said.

Safe to say, he is interested – make that, extremely passionate and laser-focused – in covering and talking sports at all levels, especially from the local angle. He thinks about sports and chasing his goal every day, from the moment he awakens in the morning until the time his head hits the pillow at night.

“Since maybe the first or second grade, he started being extremely interested in sports,” Jennifer Meekhof said. “The kids were playing football out on the field at school and he would create just a paper — hand-written journal or a page, or sometimes a few pages — all about weekly highlights. This is like second grade.

“So many touchdowns, so many yards, whatever, and then I would have to go and print off a bunch of (copies of the stats) for the kids on the team because he was insistent he wanted to hand them all out. It would be in like crayon, colored and hand-written,” she added with a chuckle.

Meekhof is not sure what the future of M7 Sports will look like, as he’s planning to go out of state to study broadcast journalism in college, preferably near a big city where opportunities in the industry are more prevalent.

But he’s been entirely committed to M7 Sports since it started. He has appeared on numerous podcasts and talk shows. He’s bolstering his experience by recently starting an internship with Fox 17, supplementing his M7 duties with weekend sports-coverage opportunities afforded by the Grand Rapids TV station.

When Meekhof founded M7 Sports, he was playing football in the Mona Shores program. He gave up the sport, and the potential to be part of what turned out to be back-to-back state championship teams, after his sophomore year so he could focus on his company and long-range goals.

Mona Shores football coach Matt Koziak said he’s “blown away” by how dedicated Meekhof is to his craft.

“He’s got people helping him that he’s brought along, other students. I was (coaching during) the Zeeland East game and the Lowell game and a guy came up to me, ‘Hey, I’m so-and-so from M7 Sports,’” Koziak laughed. “I’ve never met the person, you know what I mean?

“I’m just kind of blown away with everything that he’s grown this thing into. I just think that’s really cool for a kid to do.”

Because of his relative youth and teenagers tending to be impressionable, some might get the notion that Meekhof covers sports just so he can get a free pass to the sideline and score behind-the-scenes access. While those privileges are certainly cool, he takes his job very seriously.

Furthermore, he goes out of his way to avoid looking like a “homer.” He refuses to wear Mona Shores garb as he strives for professionalism and fairness.

“The last two years, to see him grow, to see his ambition, to see him take chances, to see him put himself out there … there’s grown people, adults, that won’t take the risks and the chances to chase their dreams, to take on ridicule,” Fairfield said.

“His profession is like a high school football coach – you put yourself out there to be successful, but at the other end, there’s also failure involved and sometimes you’re going to lose. For him to take those risks and those challenges, I really love to watch his line of questioning mature over the years. He always seems well-prepared during an interview, like he’s thought it out.”

Adults in Meekhof’s life have noticed how much maturity he’s exhibited in time, especially for somebody his age.

The “Doogie Howser of sports journalism” has a lot going for him. Recently, he was inducted in the National Honor Society at Mona Shores. He’s also been elected as part of Mona Shores’ homecoming court.

Things seem to be falling into place for Meekhof, but not without much hustle, hard work and a “nose for the ball,” so to speak.

A few weekends ago, he traveled to Columbus, Ohio, to cover an Ohio State game and write a feature story on former Muskegon and Muskegon Catholic Central football standout Cameron Martinez. Meekhof had been covering the game from the pressbox, but he got down to field level just in time to capture a great video angle of Martinez’s first-ever collegiate touchdown on a pick-six against Tulsa.

Meekhof is grateful for his experiences and opportunities. He does not seem to care what others think, but it is important to him to treat people fairly and with respect.

“Truthfully, I think just being raised around the right circumstances (has put him on this path),” Meekhof acknowledged. “I tell people all the time that I’m very fortunate to be raised in the situation I was with discipline in my house and stuff like that, (but) everything I’ve done for M7 has been self-driven.

“I would say my parents have helped me a lot, as far as in the beginning they gave me rides everywhere and they gave me advice. … At the same time, I would say that circumstances from the past and being raised the right way, taught to be respectful, taught me to be professional to everybody, taught me to be fair to everyone. I feel like that’s what’s driven me and motivated me to try to be the best.”