CatchMark Profile of the Week: After living in Mexico, Andrew Kooi finds ‘home’ in Montague

Wildcats’ starting QB and all-state kicker, a young man of many talents, looks to lead team to another ‘Battle of the Bell’ victory.

Editor’s note: Keep your eyes on CatchMark SportsNet and catchmarksports.com for a “Profile of the Week” soon on a Whitehall football player in advance of the “Battle for the Bell” game.

Five days from now, about a half-mile north of the church, Kooi will be donning a white football jersey with blue trim and the number 7 on it. He’s a senior starting quarterback for Montague (6-1), the reigning Division 6 state champ and West Michigan Conference leader, which will play at arch-rival Whitehall (6-1) at 7 p.m. Friday in the annual “Battle for the Bell.”

Kooi, 18, is a young man of many talents. He’s a strong student, all-state kicker, ever-improving QB, talented soccer player, sneaky-good gamer, a drummer and person of strong faith. He’s fit in quite well in Montague since moving here a couple years ago after living in Mexico with parents Matt and Becky Kooi, who are missionaries there.

“I didn’t know much about Montague when I first moved here honestly,” said Kooi, who had family in the White Lake area and wanted to play football, so he moved more than 1,800 miles from Rosarito, Mexico, to Montague.

“When I moved here, it felt right, and when I visited, I visited the school and it just felt like home. Honestly, I felt more at home here than I ever have in Mexico.” 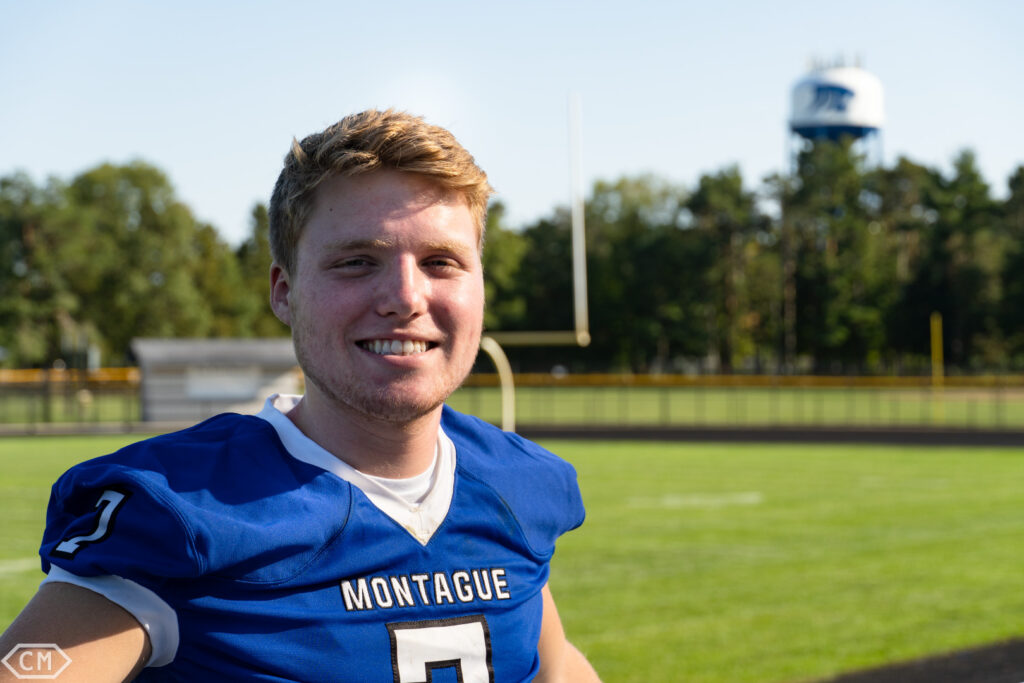 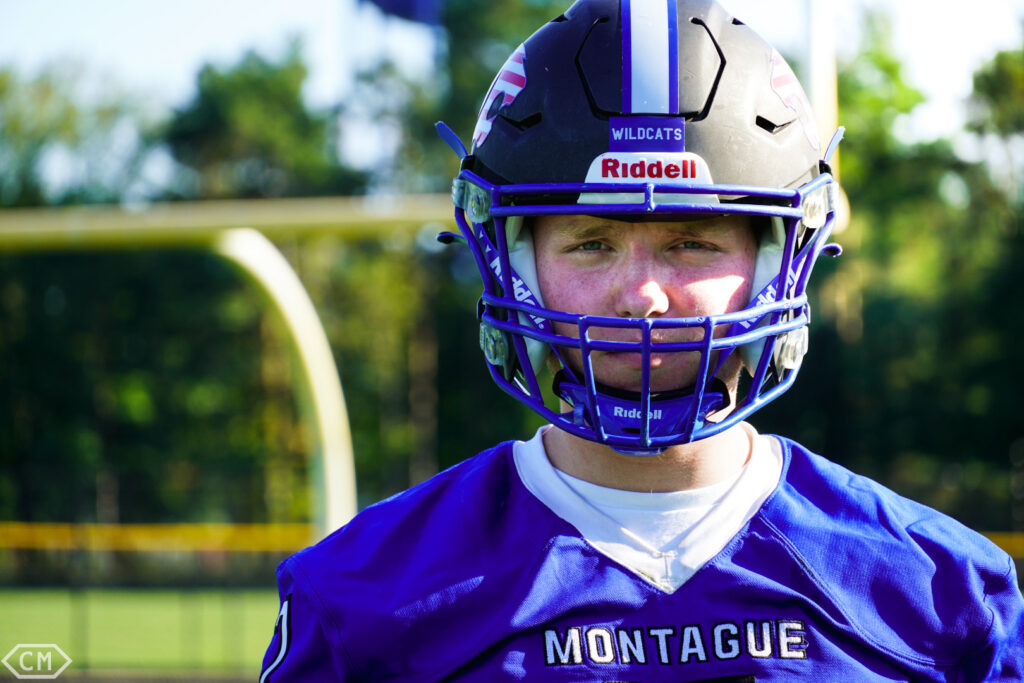 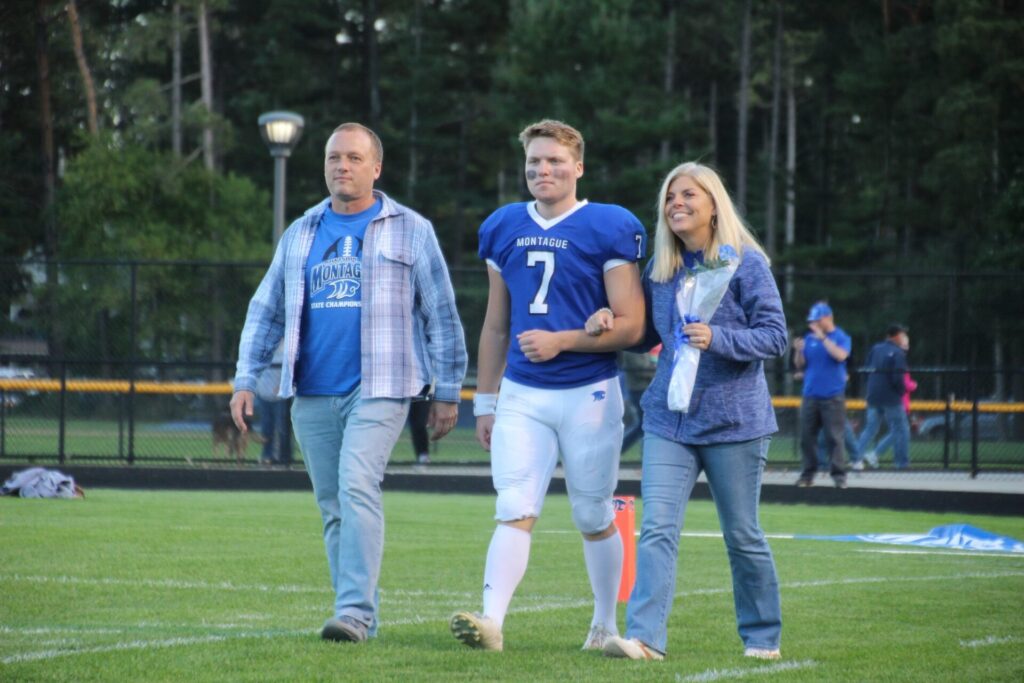 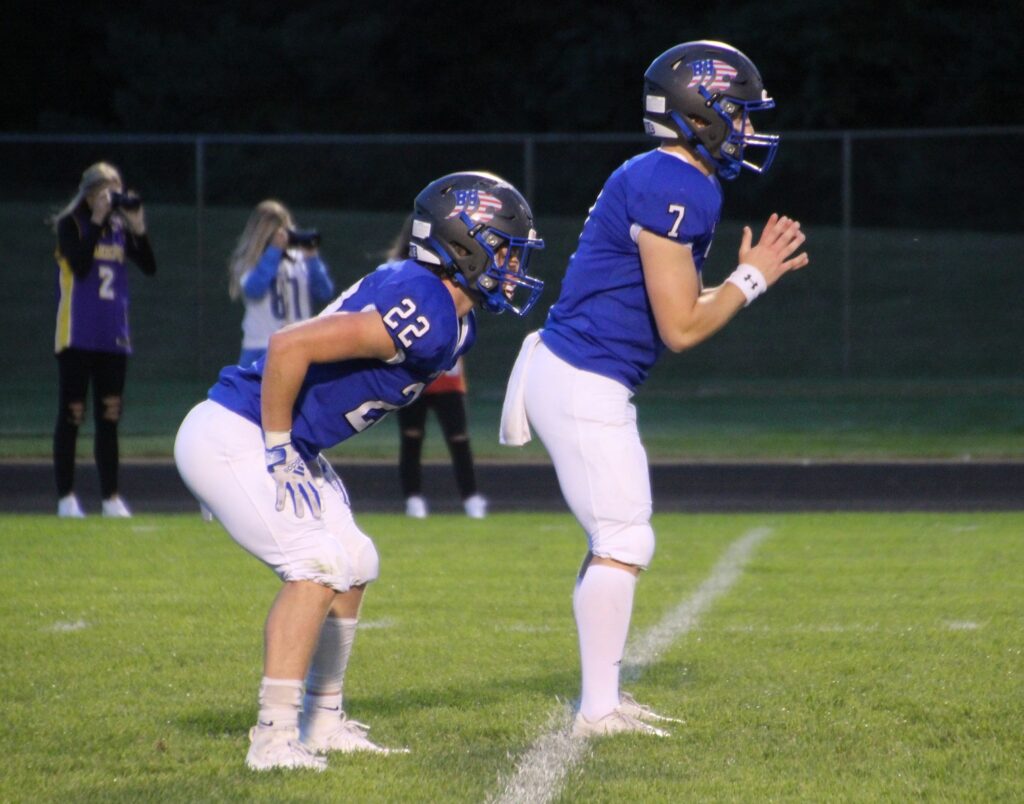 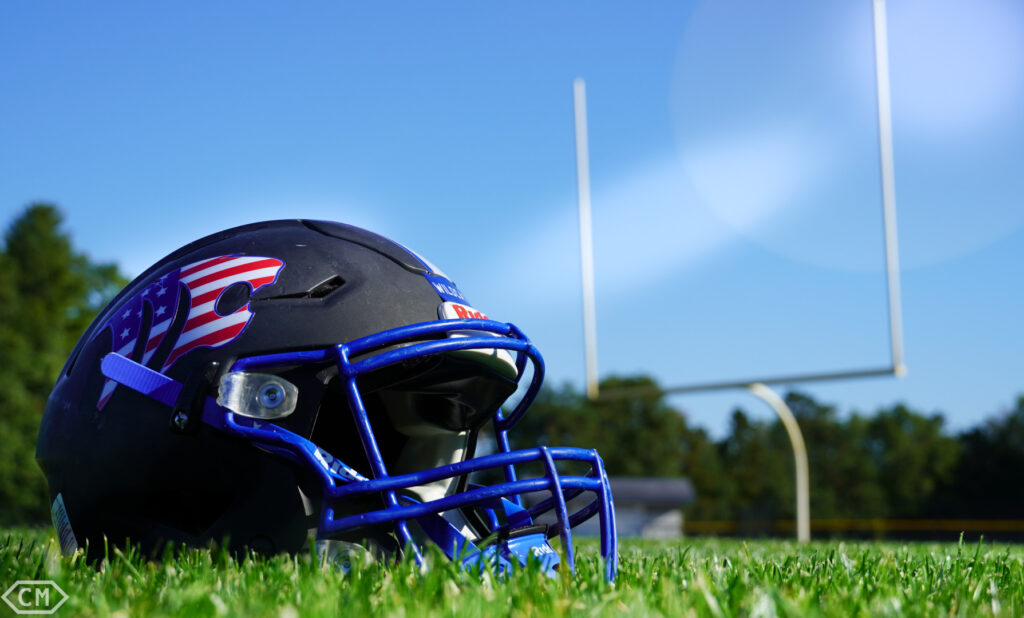 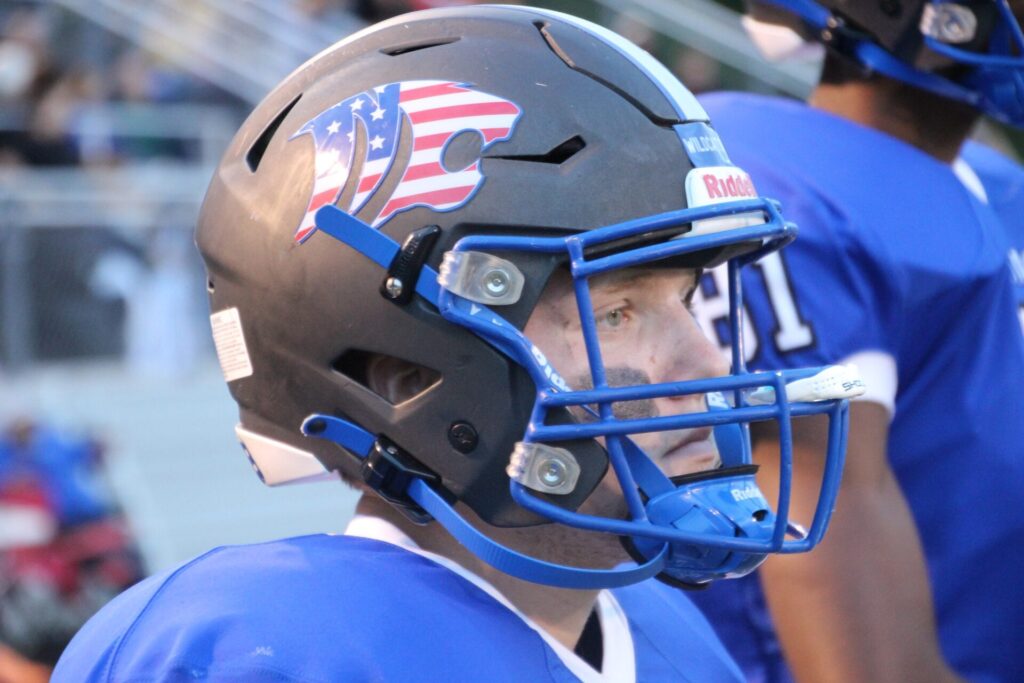 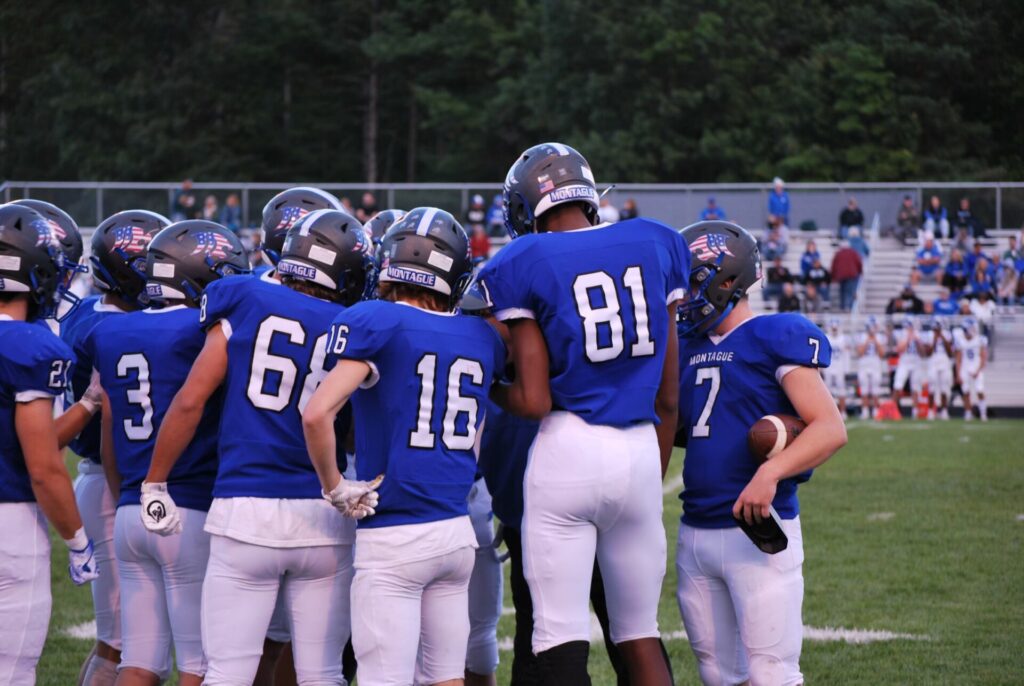 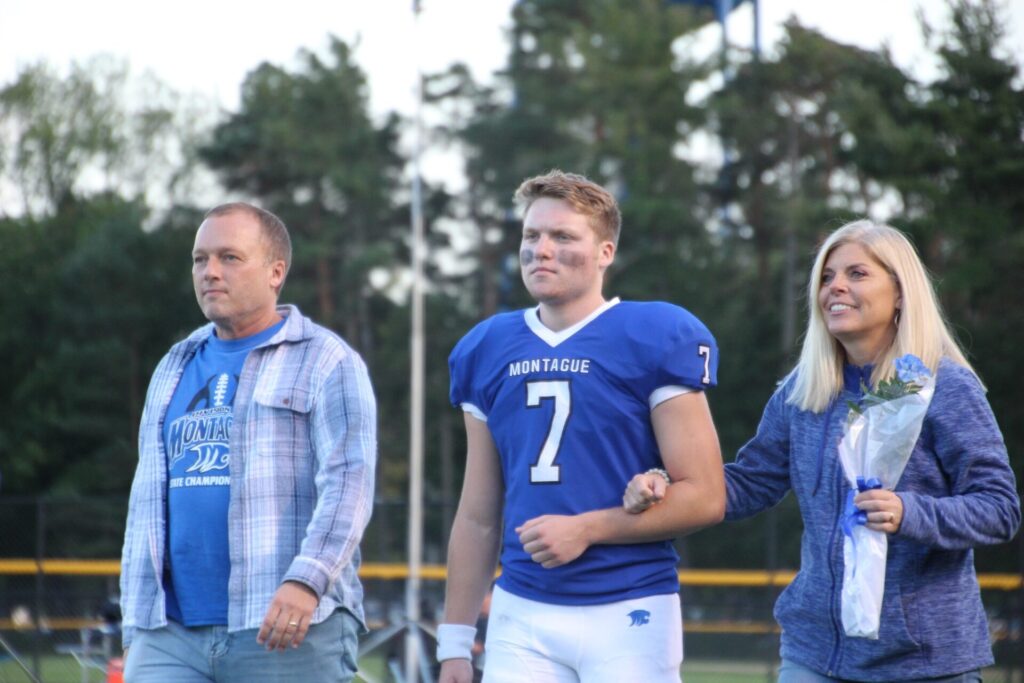 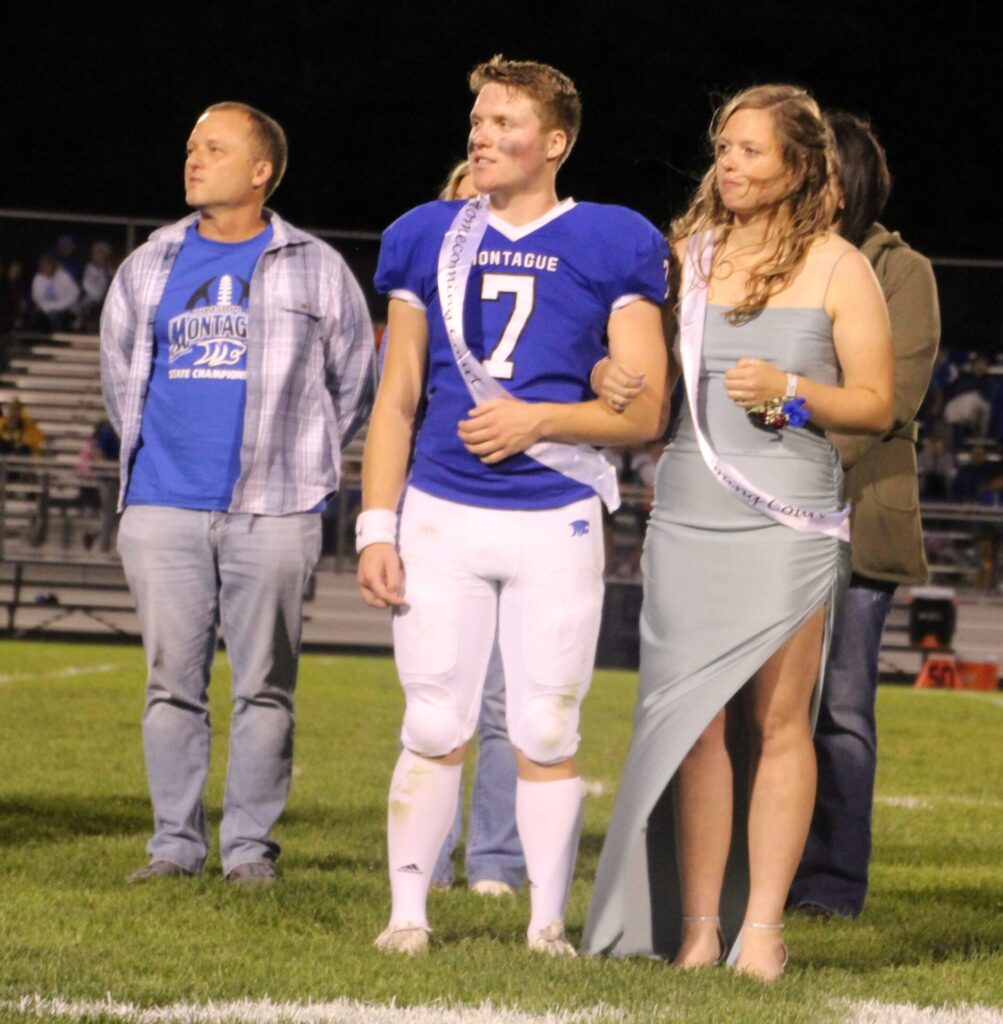 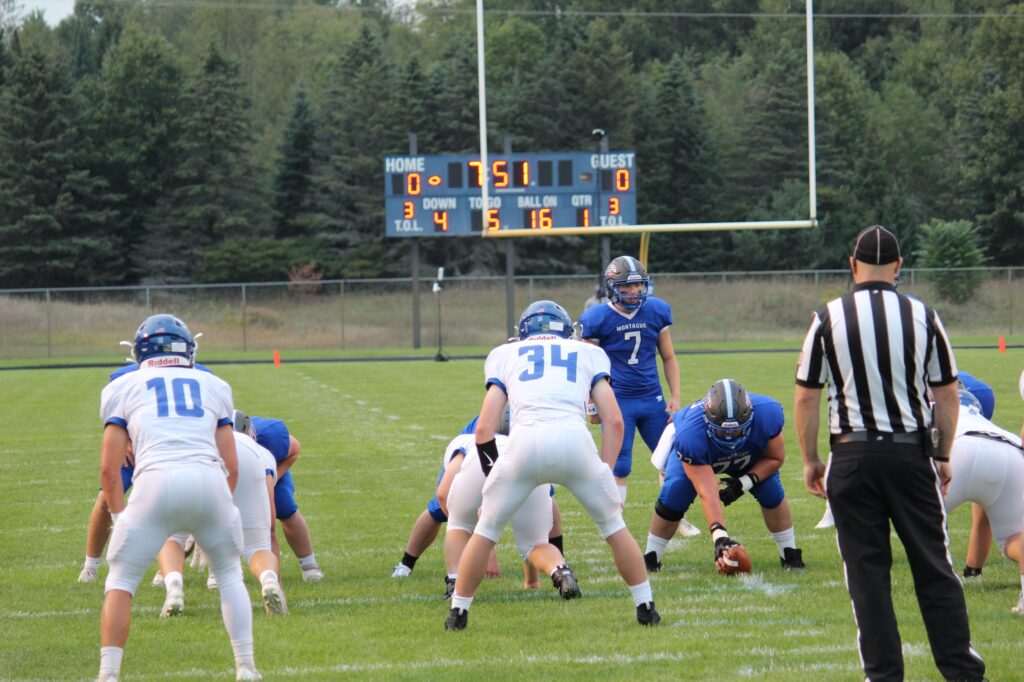 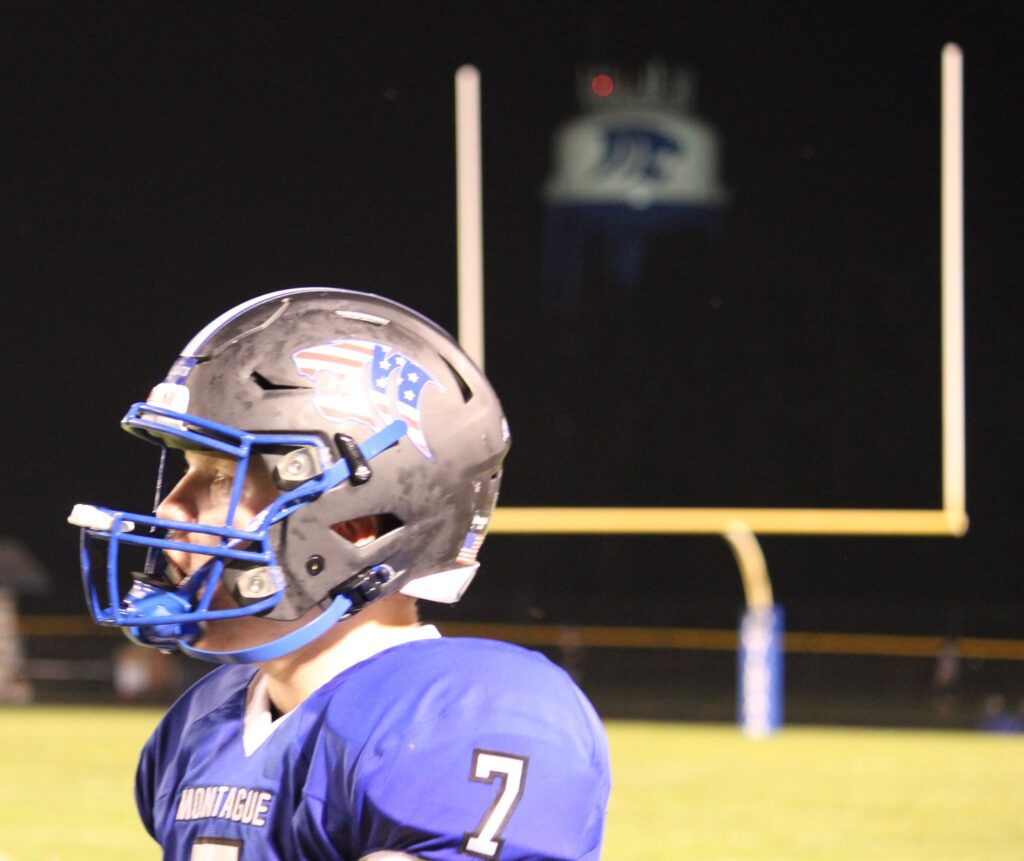 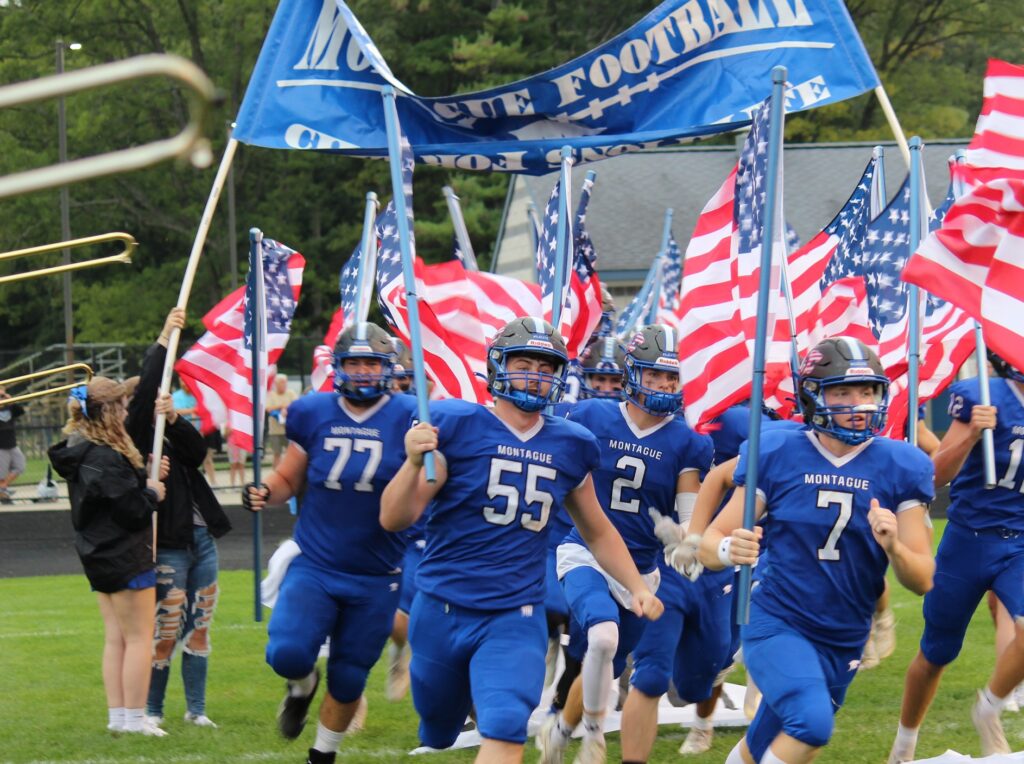 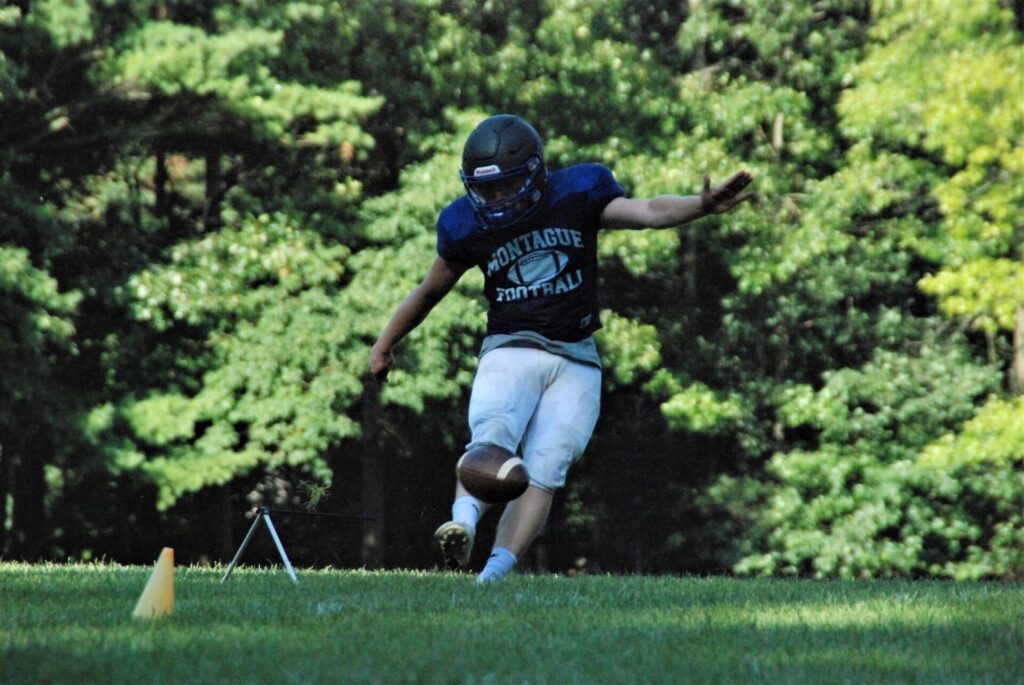 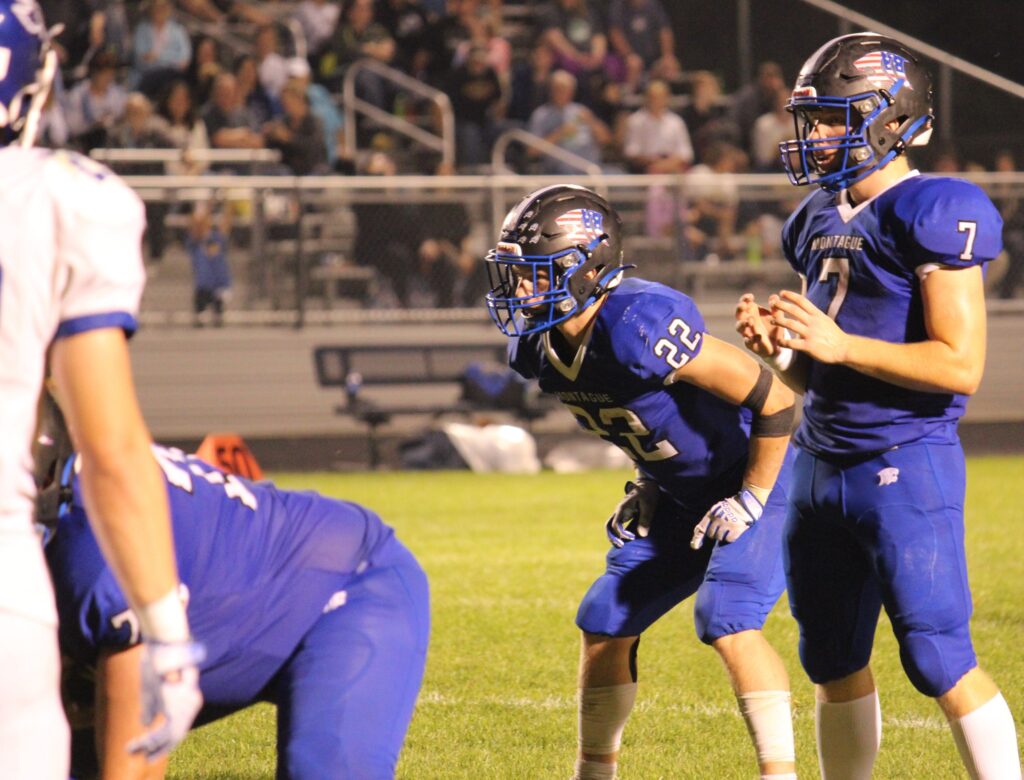 Kooi was born in Coldwater, Mich. When he was 9, his family moved to Mexico after his dad was offered a position as director of Spectrum Ministries in Tijuana, Mexico, just south of California.

Andrew Kooi has a strong soccer background, which runs in the Kooi family. He began playing the sport around age 5.

When he moved in with aunt and uncle Becky (Kooi) and Chad Petersen and started attending Montague, Kooi played both soccer and football. He played both sports this school year before deciding to give up soccer so he could focus on football and the leadership requirements that go with being a starting QB.

Kooi has had big shoes to fill, assuming the signal-caller position following the graduation departure of Drew Collins, who was The Associated Press Division 5-6 Player of the Year in 2020, when he led the Wildcats to an unbeaten state championship season. In addition to placekicking duties last year, Kooi was a valuable contributor as a slot receiver.

“He’s been really good for us. He’s improved each week,” said first-year Montague head coach Justin Dennett, who also had big shoes to fill in replacing highly successful coach Pat Collins. “That Oakridge game was kind of his coming-out party there, so that was a big one for him.

“He’s done everything we’ve asked of him. We put a lot of load on Dylan (Everett) and our running game, but Kooi being able to throw the ball and spread it out a little bit is what makes us tough to defend.”

In terms of his placekicking, Kooi is 23-of-27 on PATs and he has not attempted a field goal yet this season. He’s averaging 56.2 yards on kickoffs with eight touchbacks, and he also handles punting duties.

In last year’s thrilling 34-31 double-overtime win over Whitehall, Kooi kicked the game-winning 23-yard field goal after having to re-kick it because of a penalty. The heart-stopping victory kept “The Bell” in Montague for a sixth-straight year.

“The Battle for the Bell” this Friday is a big one again, as it will determine which teams finish atop the West Michigan Conference standings. At 5-0 in the league, Montague has already secured a share of the title. Whitehall and Oakridge, both 4-1 in the conference, need wins this week to earn their piece of the crown. Oakridge hosts rival Ravenna on Friday.

Montague enters the grudge match on a six-game winning streak, while Whitehall has won five in a row convincingly.

“Especially my senior year, you don’t want to be the class of seniors that lost ‘The Bell’ after all this time we’ve had it,” Kooi said. “I definitely think there’s a lot riding on it for us seniors.”

Kooi follows in the footsteps of older brothers who returned to the states to finish high school and play sports. Tyler Kooi, 21, who is a senior soccer player at Trinity International University in Chicago, finished up at Coldwater High School. Ross Kooi, 20, who is a sophomore at John Brown University in Siloam Springs, Ark., where he plays club rugby, graduated from San Lorenzo Valley High School near Santa Cruz, Calif.

Kooi’s younger sister, Audrey, 16, is a Montague junior and she hopes to play soccer for the Wildcats in the spring. She moved to the White Lake area this year and lives in Whitehall with grandparents Dave and Donna Kooi.

Matt and Becky Kooi are grateful to family members for opening their homes and being so welcoming.

Matt Kooi is a Muskegon High School alumnus, so Big Red blood still runs in his and his siblings’ veins. He has a soccer background as well, but he enjoys football and loves to watch Andrew play. Matt and Becky Kooi have seen five of their son’s football games this season in person; the others this season and last year, they have watched via live stream produced by CatchMark Technologies and CatchMark SportsNet.

“I’ve just been really proud of the way he’s handled himself,” Matt Kooi said about Andrew. “Without us being there, which is super, super tough for all of us, it’s been an opportunity for him and he’s put the work in both kicking and at quarterback. He’s doing it right – giving it his all and he’s learning every week and we couldn’t be prouder of him.”

Matt Kooi’s sister, Becky, and her family have taken in Andrew as one of their own. Beck and Chad Petersen’s son, Owen, who also plays for Montague’s football team as a junior, views Andrew as the big brother he’s never had. Plus, when biological brothers Owen and Eli Petersen are in a disagreement, Owen said Andrew can back him up, he noted playfully.

Owen said that Andrew is one of the nicest guys he knows and considers him a role model.

“Religion is a big part of his life and I respect everything about that. I love it,” Owen Petersen said. “We go to church every Sunday – he plays drums there at the Covenant Church in Whitehall. He’s super strong in his faith and I really admire that.”

The connection between Andrew Kooi and Owen Petersen was apparent in the win over Oakridge. Montague’s first TD of the game came on a 16-yard pass hook-up from Kooi to Petersen, their first time teaming for a score as varsity players.

As for Kooi’s future, the 3.5 student is interested in pursuing a career in the marketing field. As of now, he’s being recruited as a kicker for college.

Kooi said he’s hearing from Ferris State University, Taylor University, Wheaton College and University of Mount Union. He said his range extends to about 50 yards, although he has not been called upon for a kick of that distance yet in high school.

One thing Kooi wants people to know: He’s much more than a kicker. Actually, he’s much more than a football player, although he loves to prove that he is a pretty good one. That’s saying something, considering Kooi did not begin playing tackle football until he arrived in Montague.

“I get a little bit annoyed. I think being quarterback really helps me kind of show people my potential and the skill that I have and the work that I put in over the summer and the past years as a quarterback and as a kicker,” he said. “I just love having the opportunity to come out here in front of all the fans and ball out.”