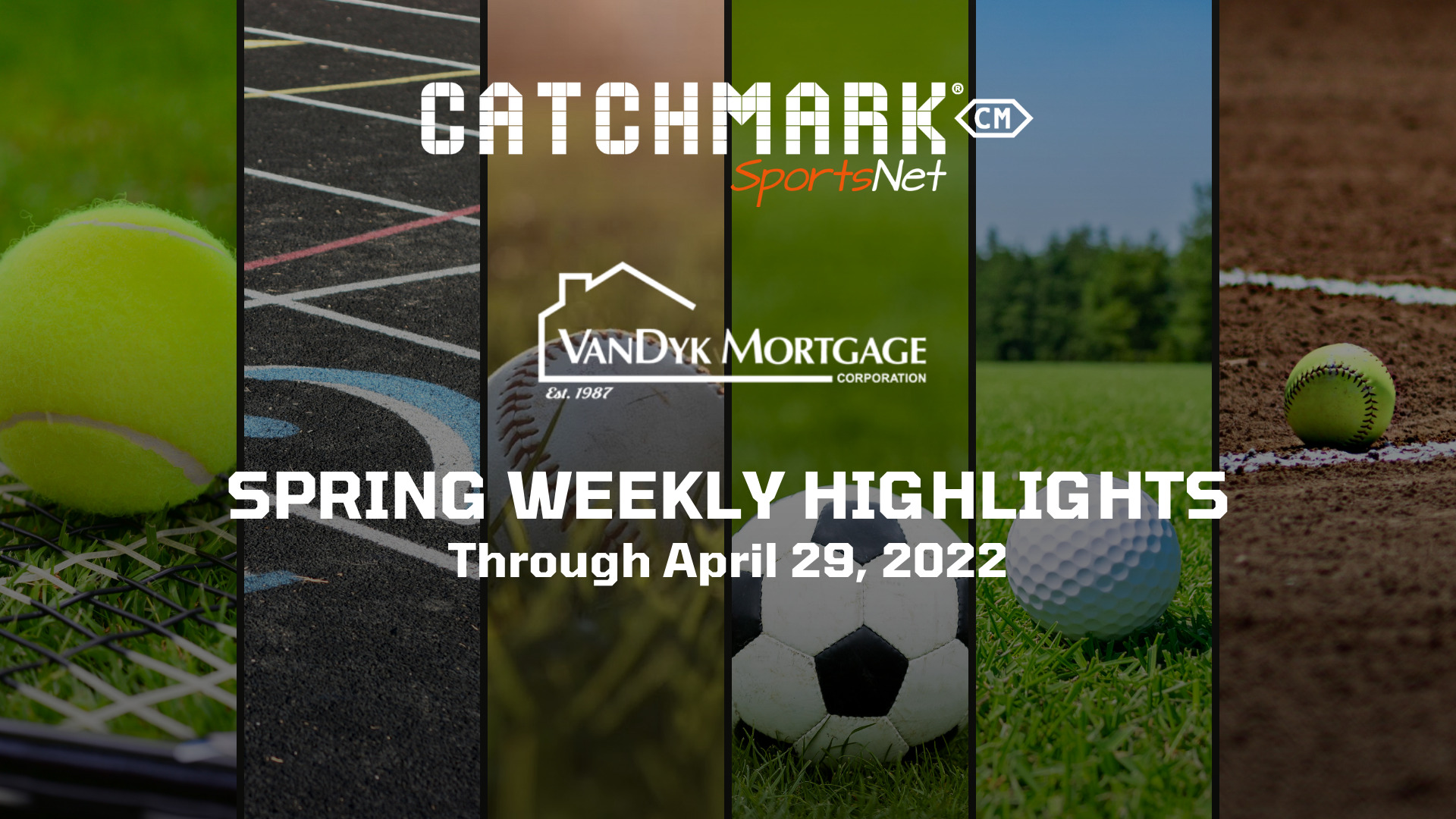 Here are round three of weekly highlights. These highlights are through April 29. We apologize if we missed a highlight or two. Let us know and we’ll do better next time.

North Muskegon tennis: The Norse had a day to remember at the Reeths-Puffer Rocket Invite Triple Duals going 3-0 over Grand Rapids Northview (6-2), Muskegon Catholic Central (7-1) and Reeths-Puffer (7-1). Multiple players shine for the Norse, including Noa Bowen (No. 1 singles), Gabby Gaston (No. 2 singles) and Francine Vinson (No. 4 singles).

Ravenna softball: The Bulldogs took home the championship in their home invite by rolling to victories over Pickford (10-1), Benzie Central (10-0) and Shelby (15-0). Addie Gillard had a big day for Ravenna, combining to go 8-for-11 at the plate and also picking up a pitching win with a one-hitter against Shelby.

Will Chye, Mason County Central baseball: The junior led his team past Whitehall in both games of a doubleheader, 3-1 and 5-2. The junior hit the go-ahead home run in the seventh inning and pitched a three-hitter in the first game, then he doubled twice in the second game. On the day, Chye finished with four hits, four runs and two RBIs. He struck out eight and walked two in his pitching performance. 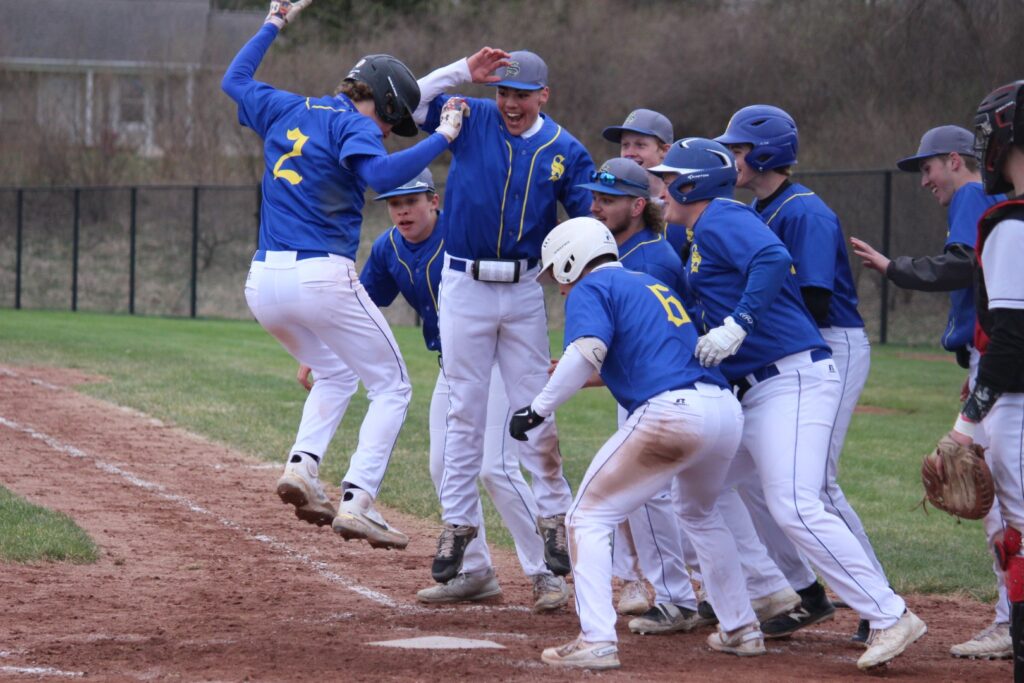 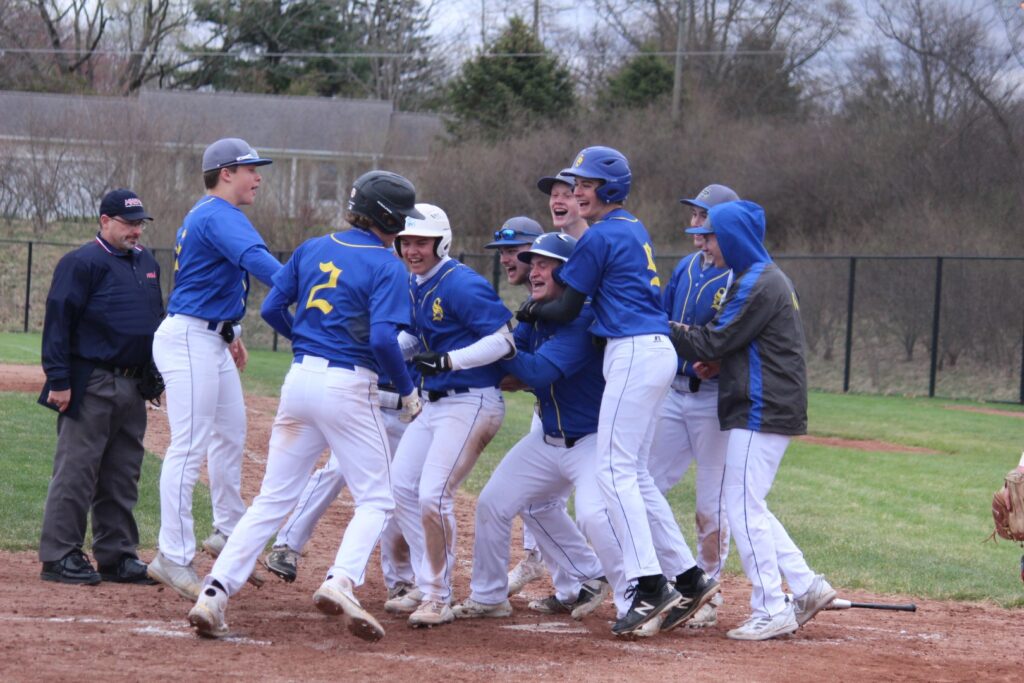 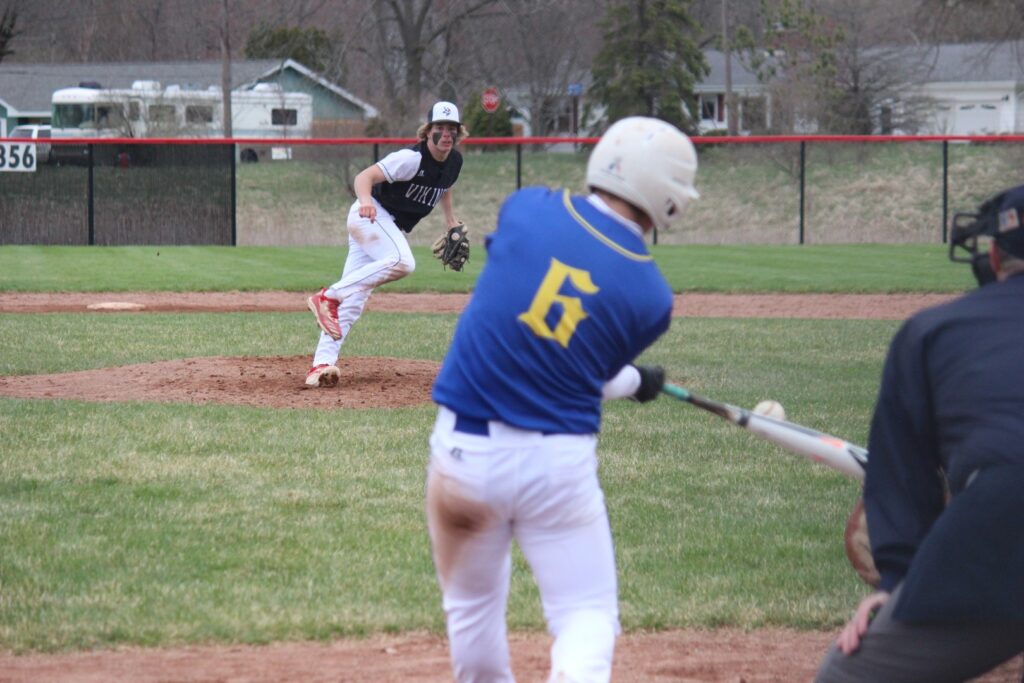 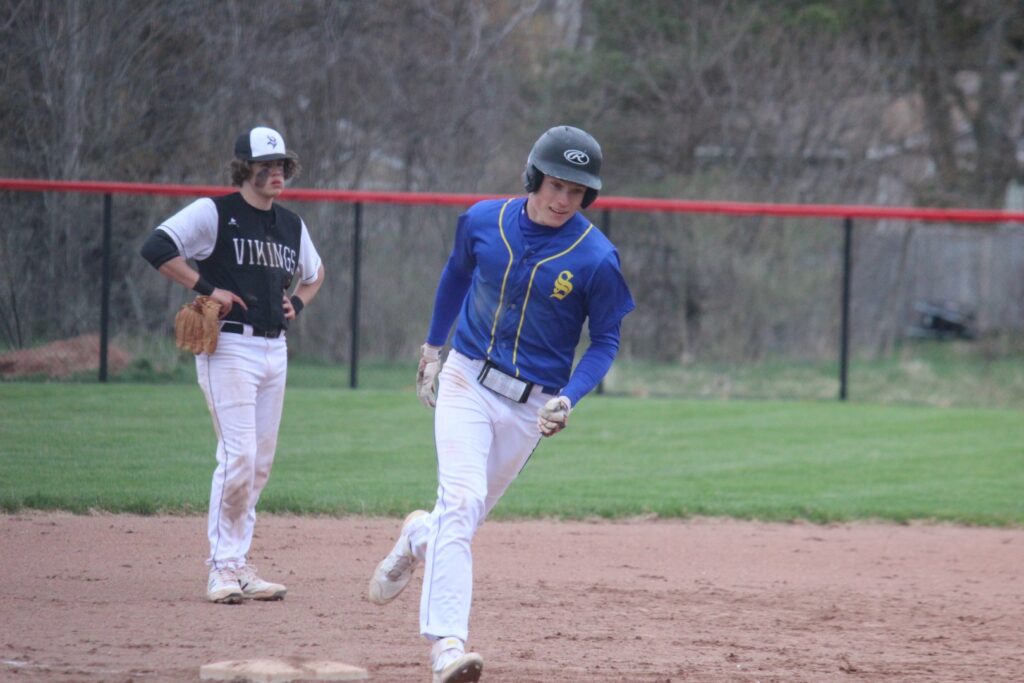 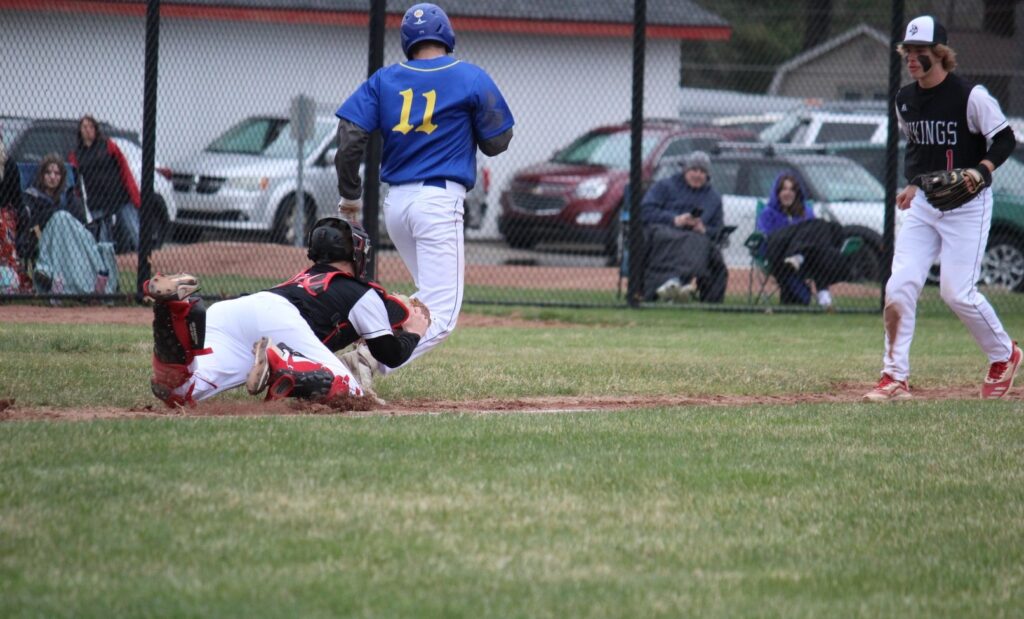 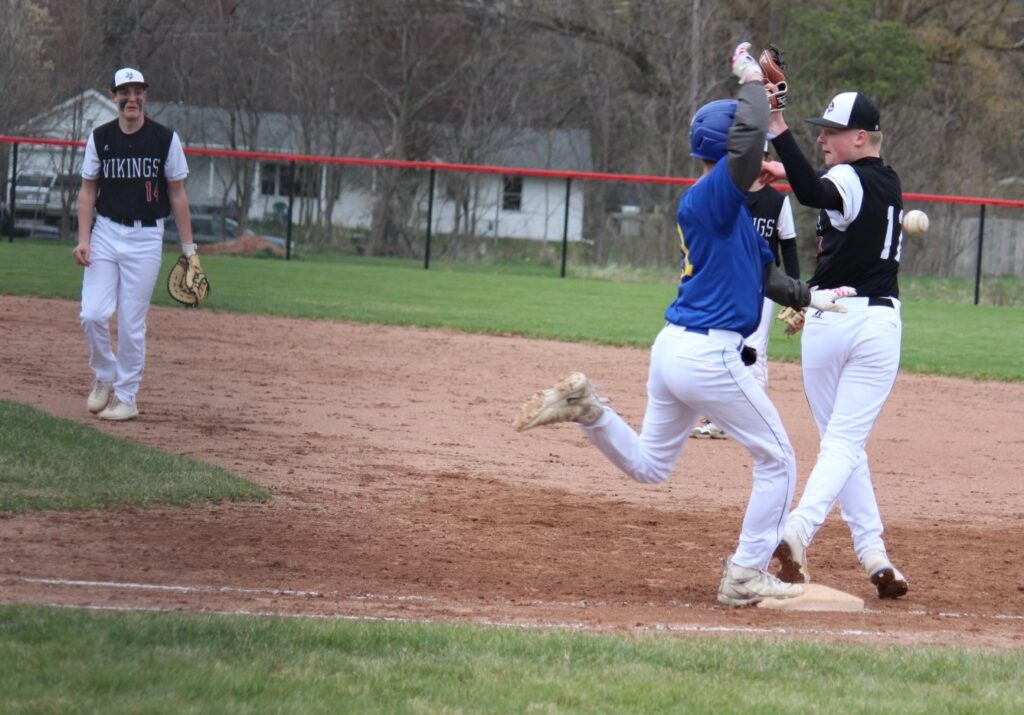 Whitehall softball: The Vikings swept Mason County Central by scores of 10-0 and 19-1 in a conference doubleheader. Kyleigh Martin powered Whitehall in the first game with 14 strikeouts from the pitcher’s circle and helping her cause with two RBIs. Martin and Illeana Hatcher both homered in the second game, while Megan LeaTrea notched the pitching win.

Oakridge softball: The Eagles put on a power display in a conference sweep of host Montague, 17-1 and 24-3. In the first game, Oakridge scored 16 runs in one inning, highlighted by back-to-back-to-back home runs by Brooklyn Galdeen, Jasmine Pastor and Kaelinn Jozsa. Galdeen hit two homers in that inning in fact, including a grand slam. In the second game, Pastor hit a grand slam, Brenna Cabrera hit her first high school homer and Jozsa had three hits (two doubles) with four RBIs.

Ravenna baseball: The host Bulldogs shut out Whitehall in both ends of a conference doubleheader, 1-0 and 9-0. Travis May earned the complete-game win in Game 1 with a three-hitter, and he went 2-for-4 with a double, home run and three RBIs in Game 2. Luke Meyers drove in Ravenna’s lone run in the first game.

North Muskegon soccer: The Norse were victorious over Grand Rapids Covenant Christian, 3-0, in a big nonleague match. Scoring for the team was Sam Johnson (2 goals) and Natalie Pannucci (1 goal). On Thursday, North Muskegon picked up a key conference win at Oakridge, 4-0.

Montague baseball: The Wildcats swept visiting Oakridge in conference action, 8-1 and 6-1. Kade Johnson earned the win in Game 1, while Colton Blankstrom notched the victory in Game 2. Nick Moss and Tate Stine had two hits apiece in the first game for Montague. In the second game, Aidan Buchberger, Colton Blankstrom, Tugg Nichols, Owen Peterson and Chase Gowell all with 2 hits.

Whitehall boys golf: The Vikings dominated the Oakridge Conference Jamboree at Stonegate Golf Club with a team score of 164. Leading the way was Kyren Bluhm and Brady Tate, who both shot 40. Landon Griffin (41) and Nick Fuller (43) rounded out the scoring for Whitehall.

Hart baseball: The Pirates swept a nonleague doubleheader at Manistee Catholic Central, 16-1 and 12-2. Blake Weirich tossed a one-hitter in the first game for Hart and he went 2-for-4 at the plate in the second game. Kyan Clark was 2-for-3 with four RBIs in Game 2. Kory Charron, Logan Purdy and Nick Simon had multi-hit games in the first contest.

CatchMark Scoreboard: Spring sports results in the West Michigan Conference (April 29)
See the CatchMark SportsNet livestream schedule for the week (May 2-May 8)