Voting closed Sunday for the awards, which are sponsored by VanDyk Mortgage. 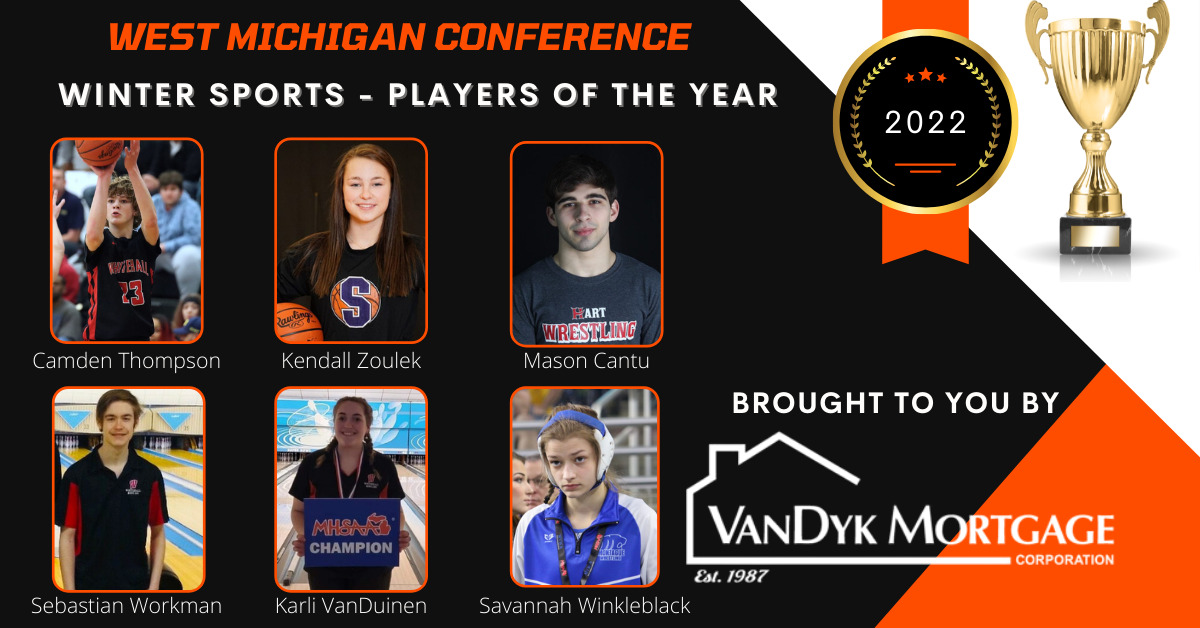 CatchMark nominated three student-athletes from each 2021-22 winter sport for the VanDyk Mortgage West Michigan Conference Player of the Year awards.

The awards’ recipients were determined entirely by our readers. All last week, readers weighed in through fan polls and now the results are final.

The six polls generated nearly 60,000 total votes, with more than a third of them coming from the boys basketball Player of the Year race.

CatchMark is inviting all Player of the Year award winners and finalists to a presentation banquet and honorary dinner. It will be held at 6 p.m. Sunday, April 24, at North Grove Brewers in Montague.

Each Player of the Year will receive an individual trophy, courtesy of VanDyk Mortgage, the title sponsor. A trophy with award winners’ names engraved on it will stay in the CatchMark office. All finalists also will receive certificates.

Here are details about each of the Player of the Year award winners, along with how voting turned out in each sport:

Thompson was a true difference-maker for the Vikings, who went 2-3 without him as he missed the first five games with an ankle injury and 16-3 with him in the lineup.

The 6-foot-4 freshman played more of a forward position for Whitehall, but his versatility allows him to man any position on the court. Thompson’s athleticism, quick jumping ability, wiry frame and craftiness around the basket made him tough to defend.

The biggest game statistically for Thompson was his 32-point, 18-rebound, 3-block night at North Muskegon in the Vikings’ 69-61 victory over the Norse on Feb. 4. In a 95-63 regional finals loss to eventual Division 2 state runner-up Grand Rapids Catholic Central, Thompson finished with 22 points, 15 rebounds and two blocks.

Thompson is a three-sport standout, who also excels in football and track and field. He’s also a strong student.

Whitehall finished with an 18-6 overall record. The Vikings won their second-straight West Michigan Conference title with an 11-3 mark, and they captured their first district championship since 2007.

Zoulek closed her career as one of the top girls basketball players in Shelby history, finishing with 1,040 points and 606 rebounds.

This season, the 5-foot-9 senior averaged 14.9 points, 7.7 rebounds, 2.7 assists and 2.5 steals per game. She posted a double-double in at least half of her games, according to Shelby coach Sarah Wolting.

Per Wolting, Zoulek was the player the Tigers relied upon to carry the scoring load and to take the end-of-game shot. She also was a nifty passer.

Zoulek typically performed her best in Shelby’s biggest games. For example, in a 42-39 loss at Montague on Feb. 24, she finished with a game-high 16 points, seven rebounds, six assists and five steals.

A three-sport athlete, Zoulek has signed to play basketball at Muskegon Community College, where she will pursue a degree in nursing.

Shelby finished with an 11-10 overall record this season, 7-7 in the West Michigan Conference.

Cantu placed in the top three at the state finals three of his four years as a Hart wrestler with two runner-up finishes, including this season in the 145-pound weight class of Division 3.

In his senior campaign, Cantu racked up a 50-2 record with 41 bonus-point victories. He collected West Michigan Conference, district and regional titles.

In his career, Cantu was a glittering 170-24 with 136 bonus-point victories, including a 54-4 mark as a sophomore with another runner-up finish.

Cantu was a three-time team captain and he earned team MVP honors each of those seasons. He helped the Pirates capture three straight regional championships, resulting in three trips to team state finals, and played a big part in the program winning four consecutive district titles.

Cantu is a leader on the mat, volunteering his time to help coach Hart’s youth wrestlers and run practices for them. He’s also a leader in the classroom, carrying a 4.01 grade-point average. He has signed to continue his academic and wrestling pursuits at the University of Indianapolis.

He was Academic All-State this season, too. This is the first year that the Michigan Wrestling Association has allowed underclassmen to earn that status.

Winkleblack placed at every girls tournament in which she competed, including winning three straight titles at Grand Haven, Northview and West Ottawa invites. She went on to capture a regional championship, too.

Winkleblack won 20 overall matches this season, posting a 17-5 record against female opponents. She recorded 11 pinfalls, notched 26 takedowns and scored 109 points on the season.

The sophomore was a MYWAY state champion in 2021 and runner-up this year. Recently, she finished eighth at the USA Folkstyle Nationals in Colorado.

Workman was the No. 1 bowler for Whitehall, which captured West Michigan Conference and Greater Muskegon Athletic Association championships.

The senior ranked third in scoring average among conference bowlers at 170 over the course of 19 games. His overall average on the season was 164 with a high game of 236 and high two-game series of 445. The four-year varsity starter averaged 179 over his career.

Workman finished four places from qualifying for the Division 2 state finals as an individual.

During his sophomore season, Workman became the only West Michigan Conference bowler to roll a 300.

VanDuinen is the Division 2 state champion, who has signed to continue her academic and bowling pursuits at Division I Arkansas State University.

After falling in the quarterfinal round of the state finals last year, VanDuinen edged her quarters opponent by one pin and then cruised to the title. She defeated Wayland’s Bella Harnish in the finals, 460-381. VanDuinen rolled games of 235 and 225 in the championship match.

VanDuinen captured the Greater Muskegon Athletic Association title, also leading the Vikings to team championships in the GMAA and West Michigan Conference. She ranked No. 1 in the conference with a 190 average of 21 games.

VanDuinen also is a golf standout with three GMAA titles and earning all-state three times, including a Division 3 state runner-up finish in the fall. She also was the 2021 VanDyk Mortgage West Michigan Conference Golfer of the Year.