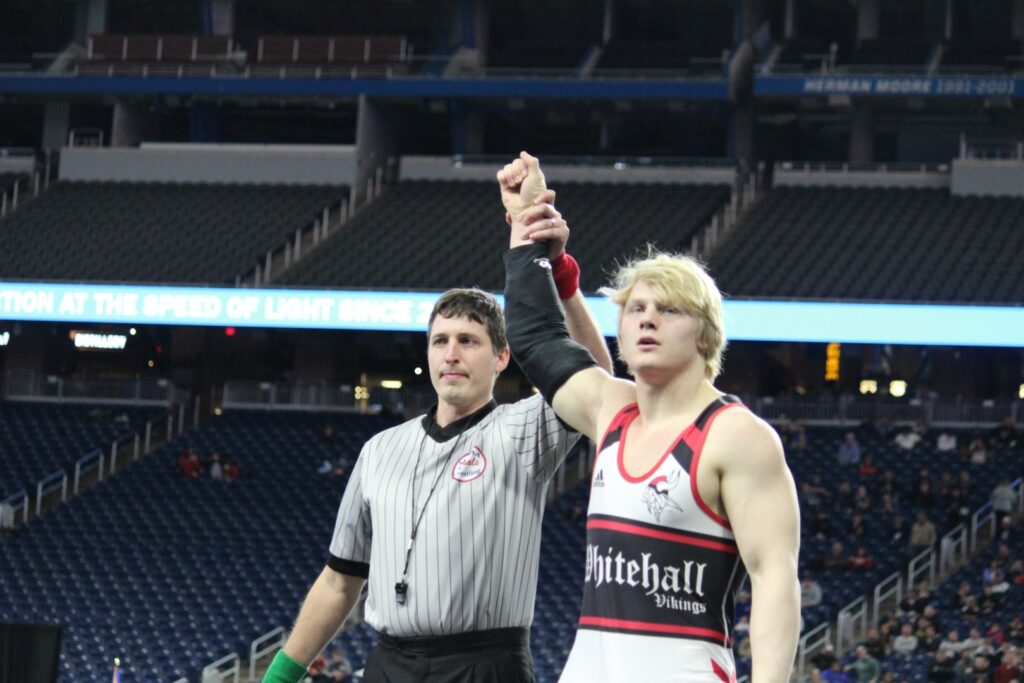 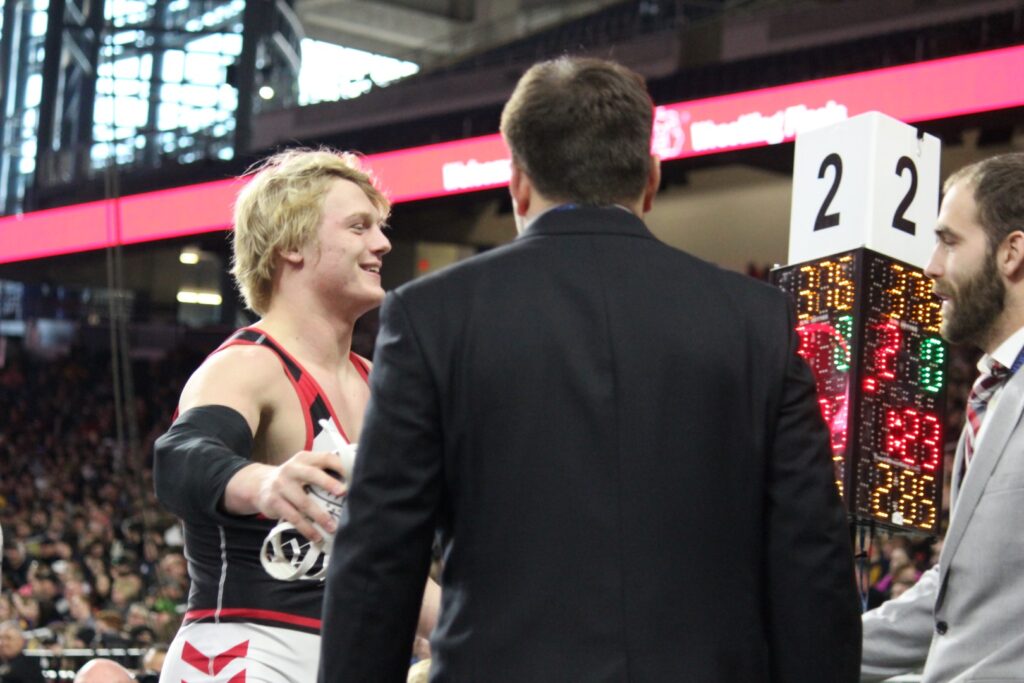 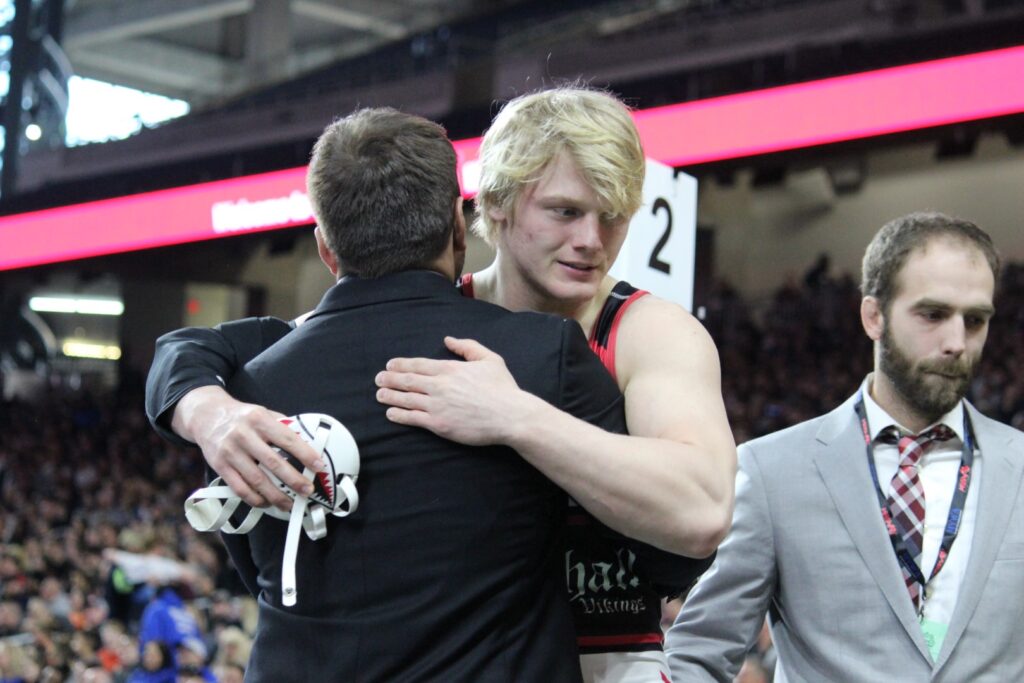 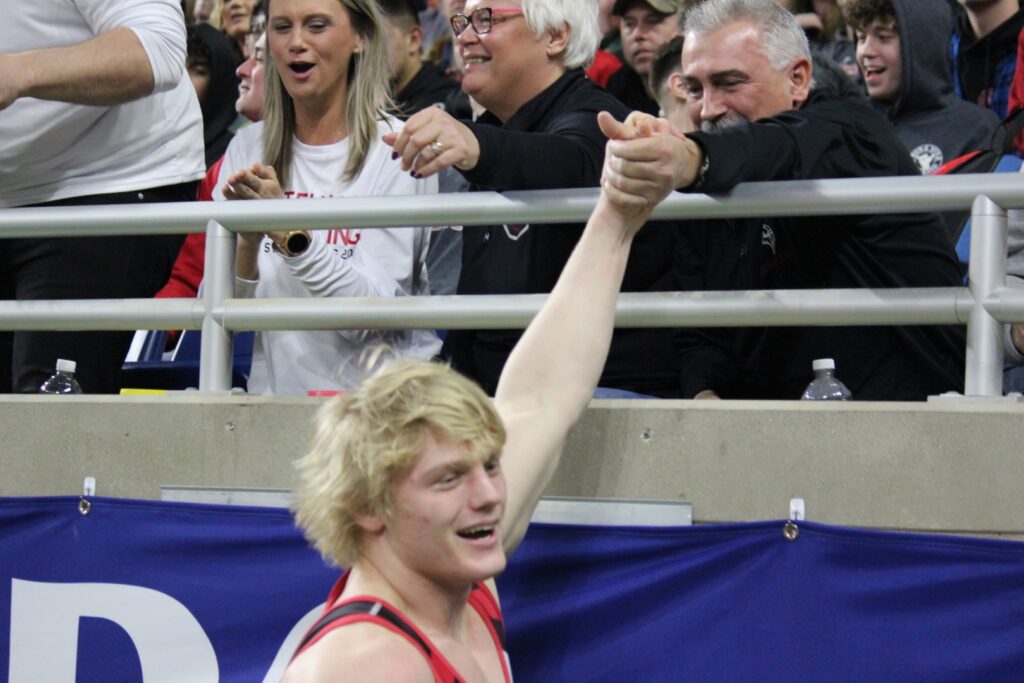 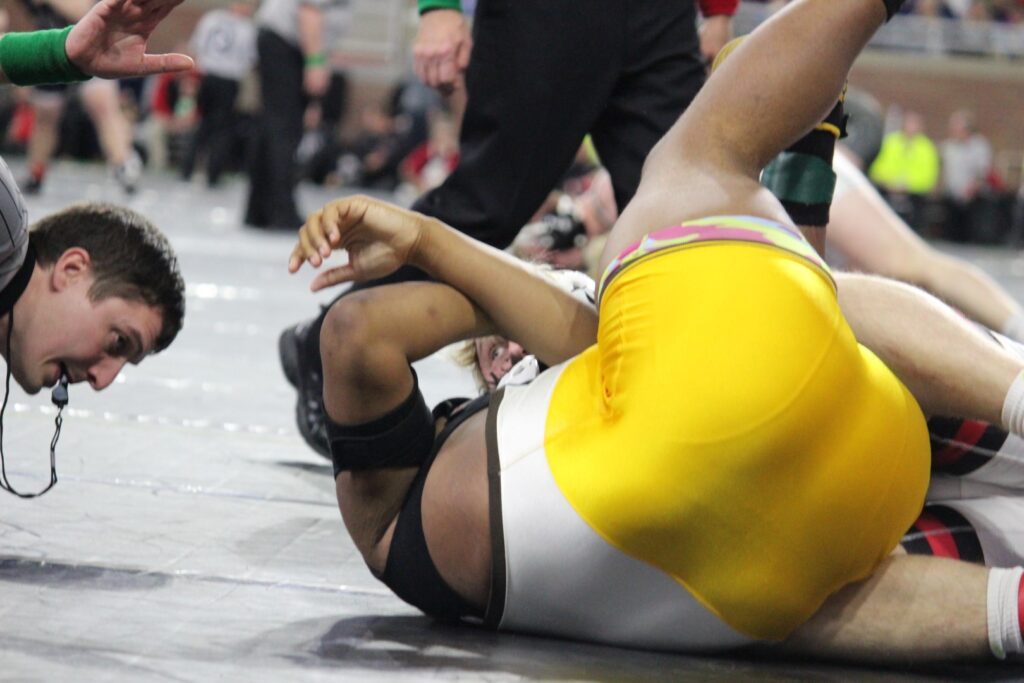 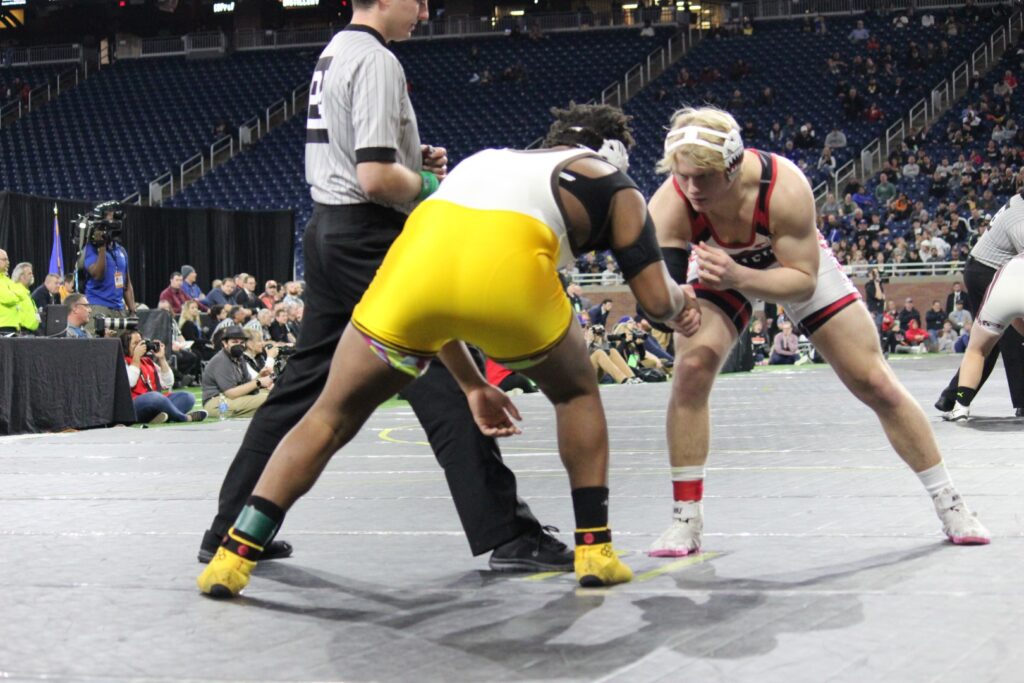 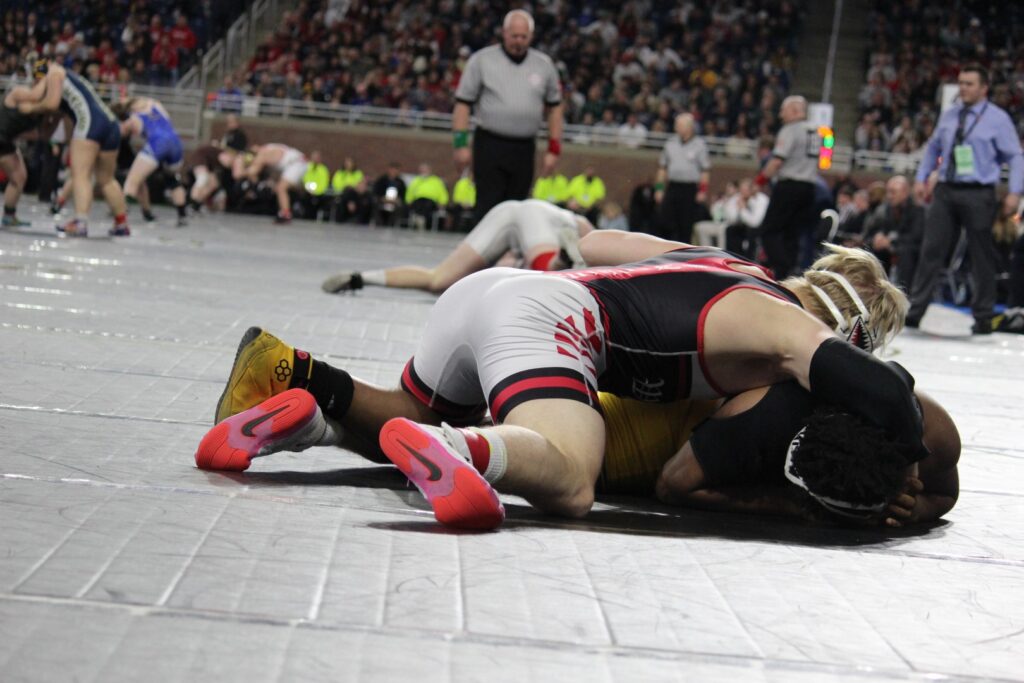 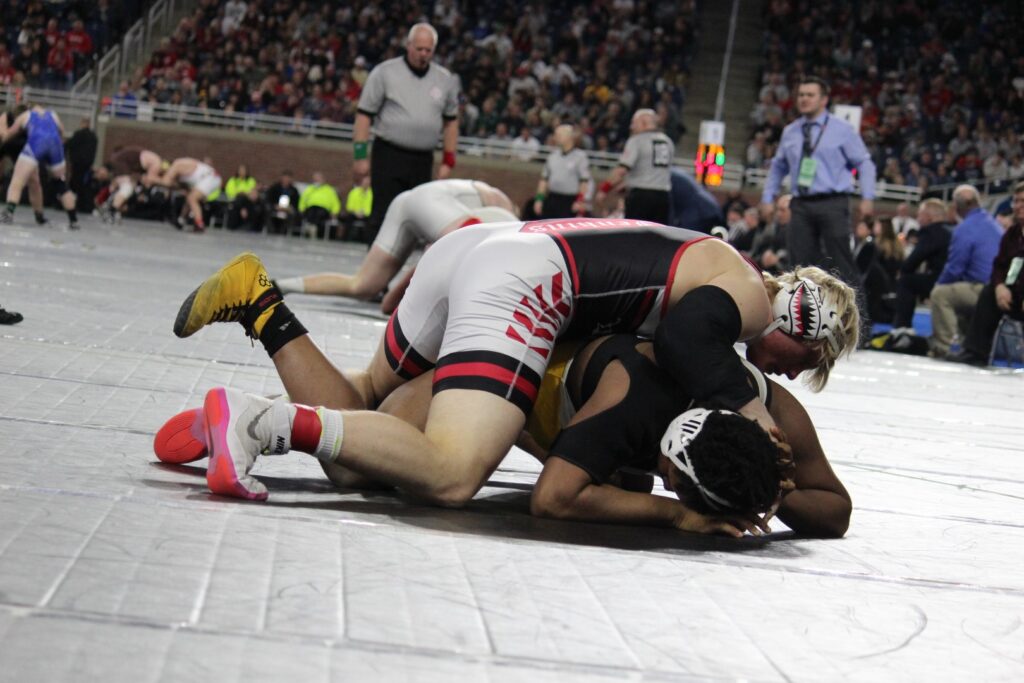 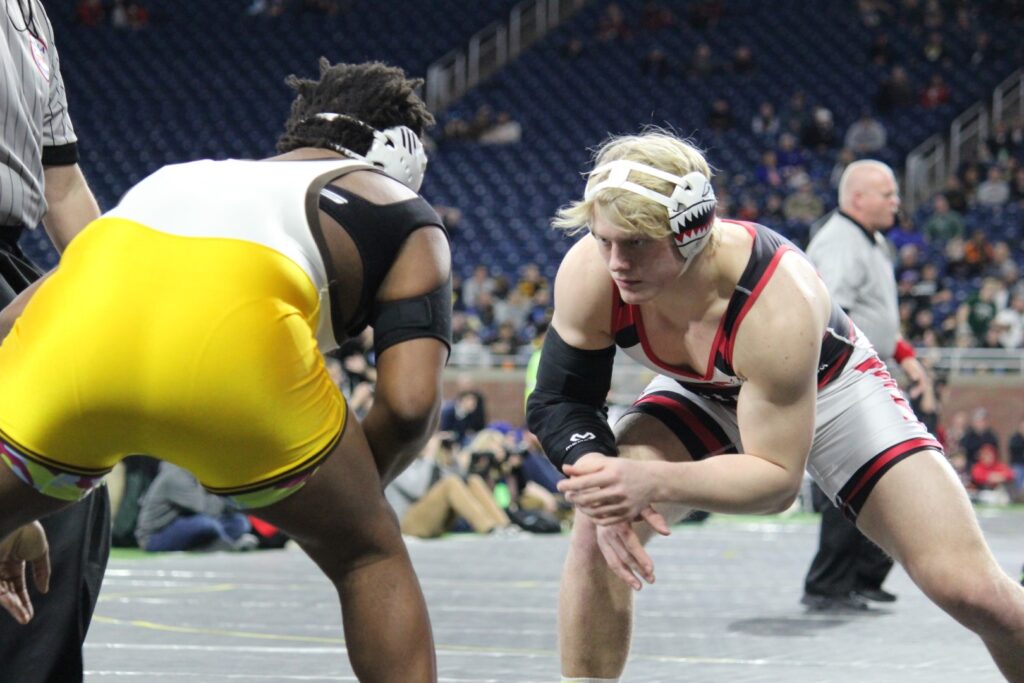 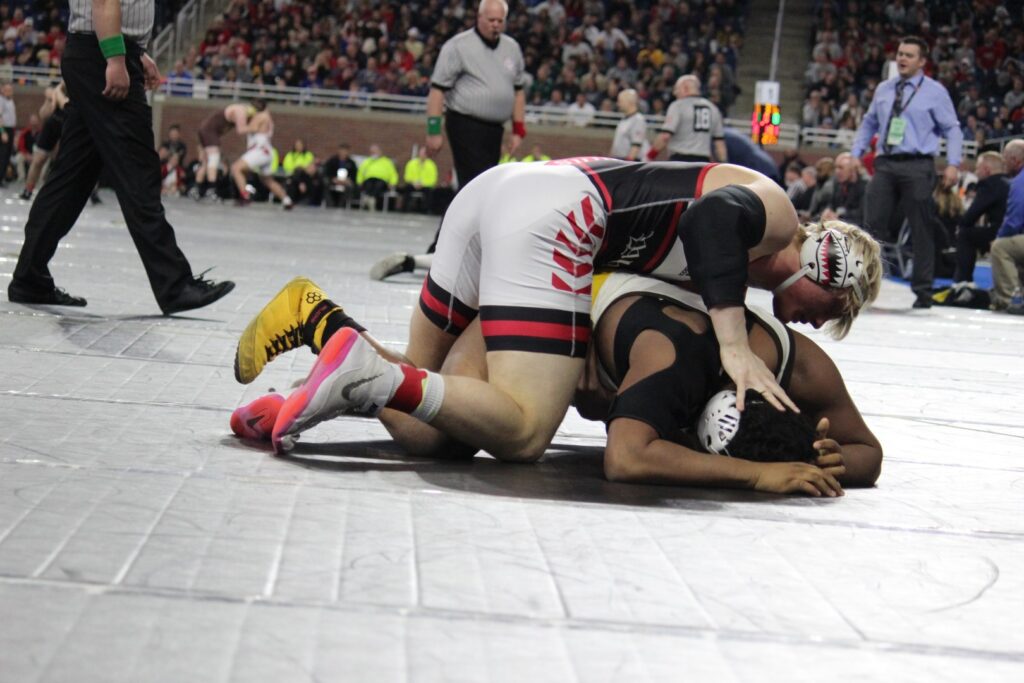 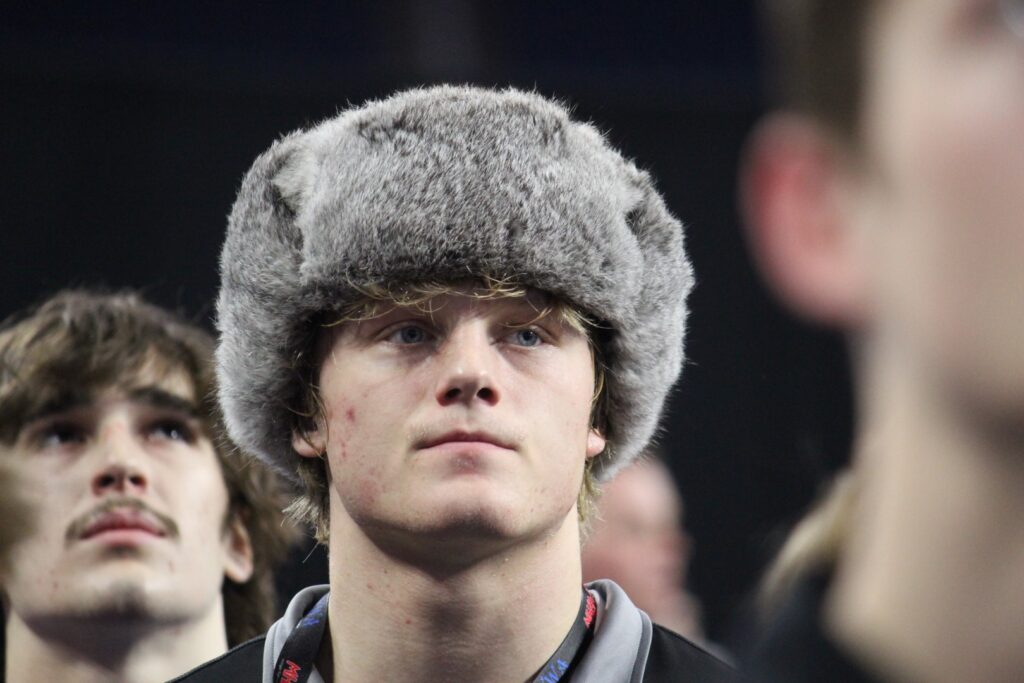 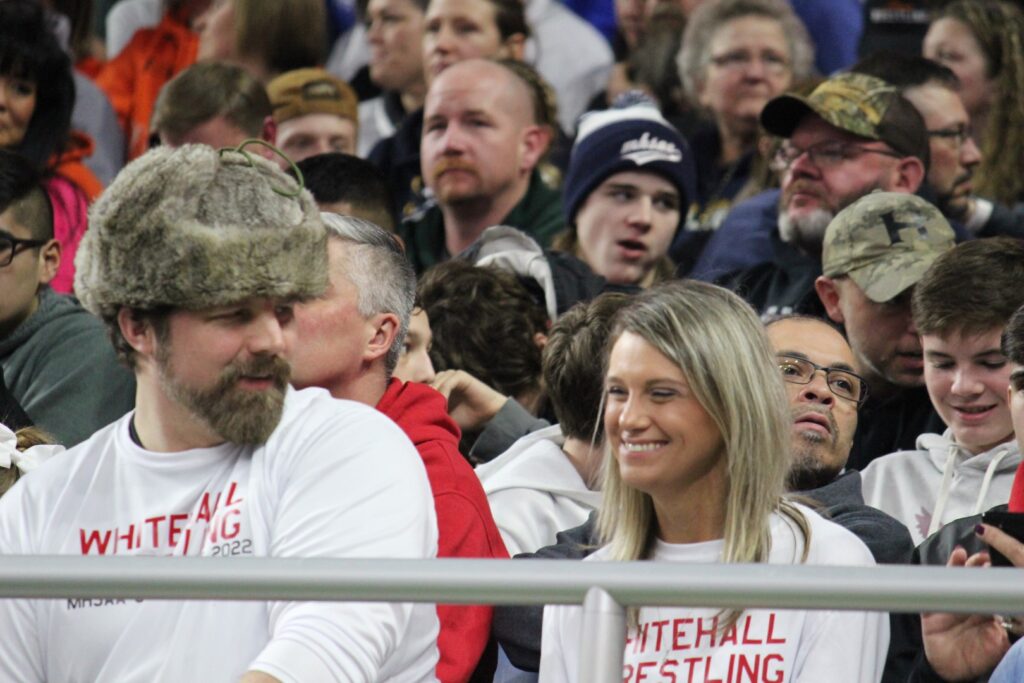 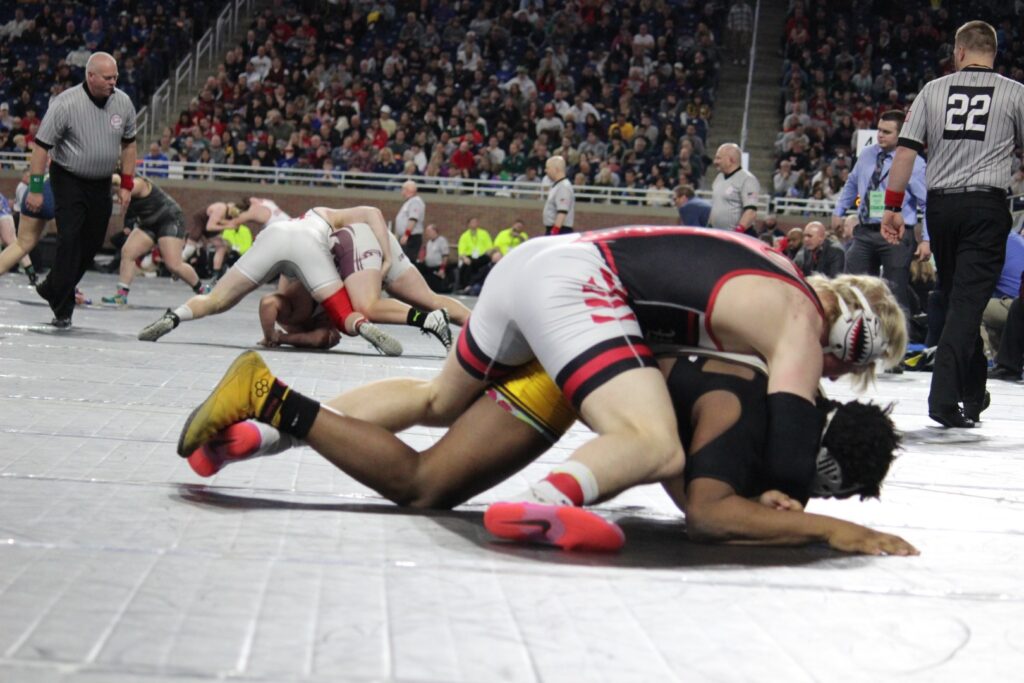 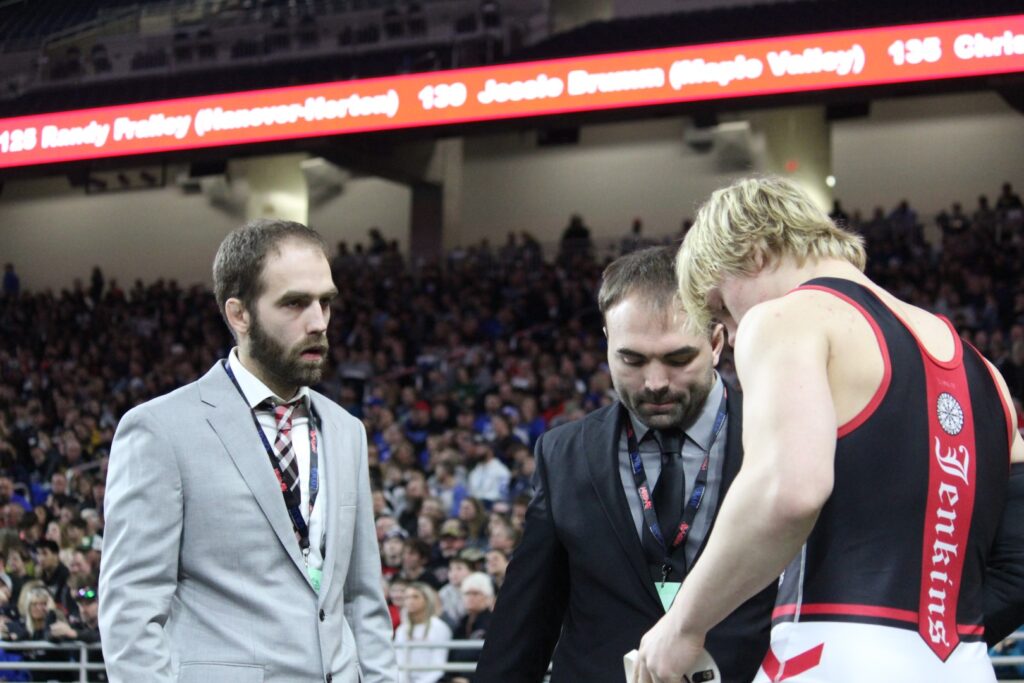 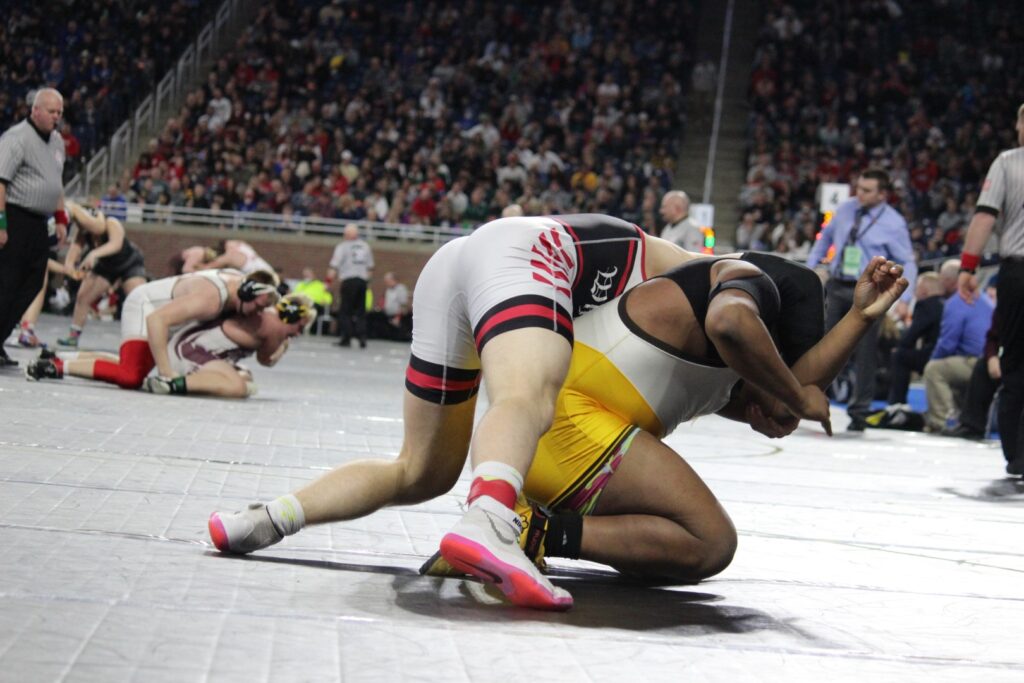 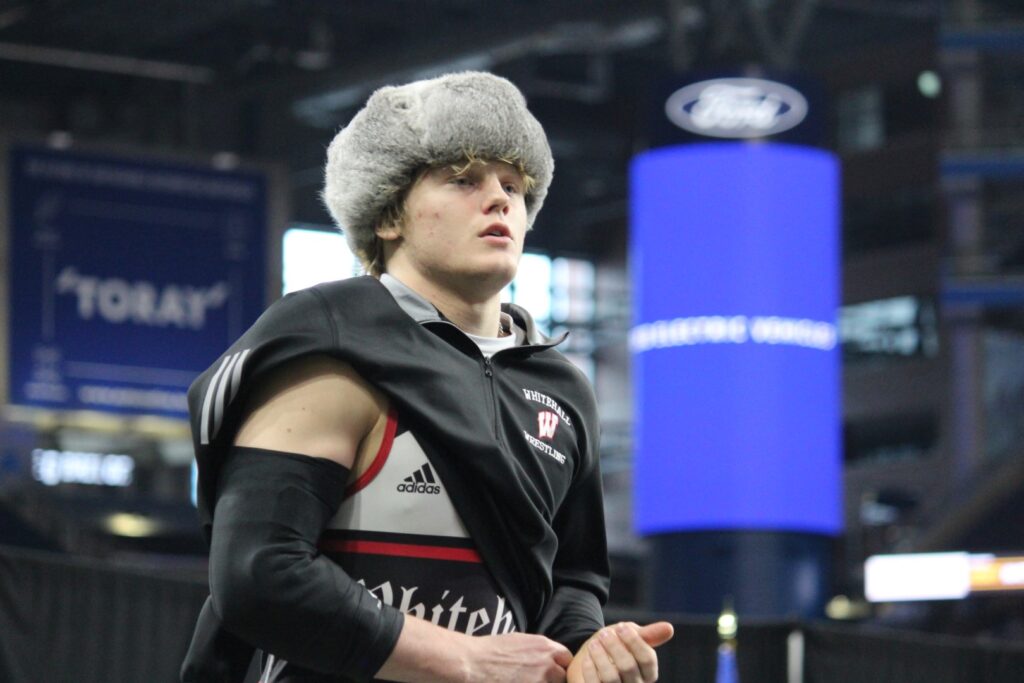 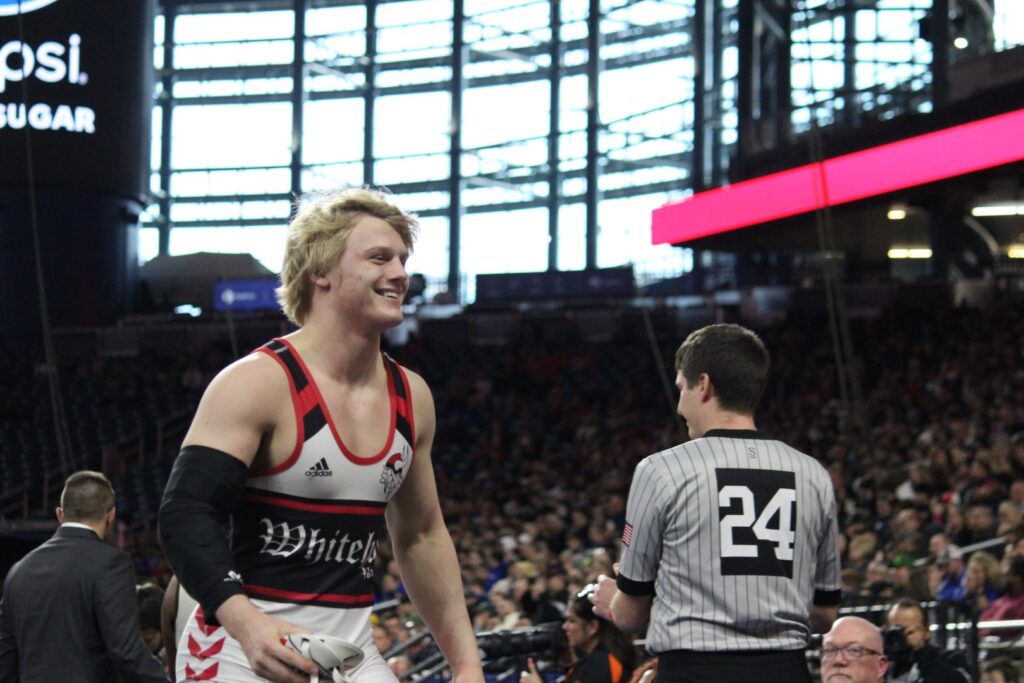 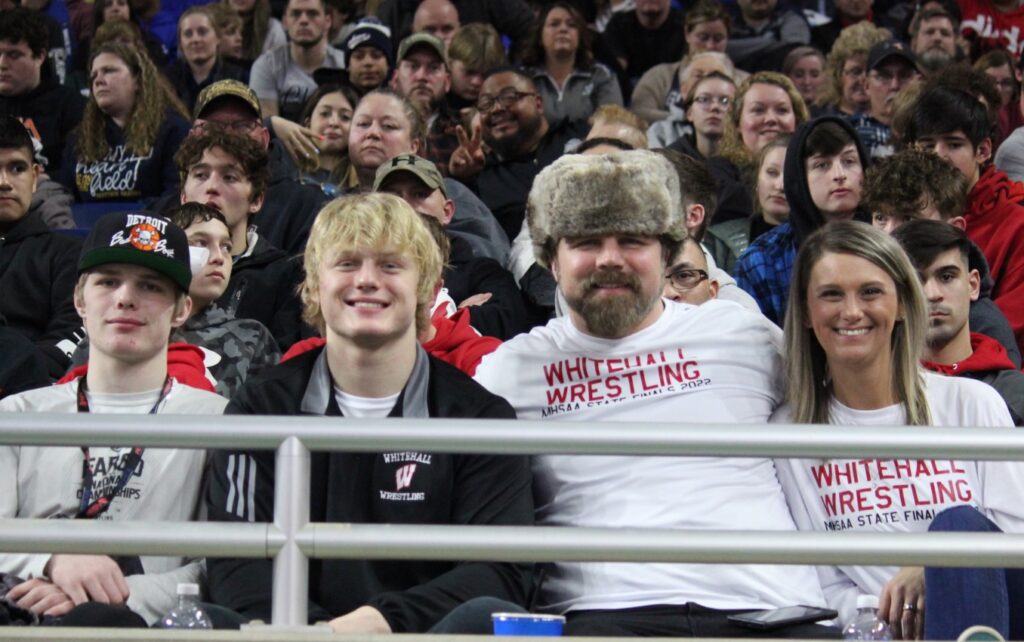 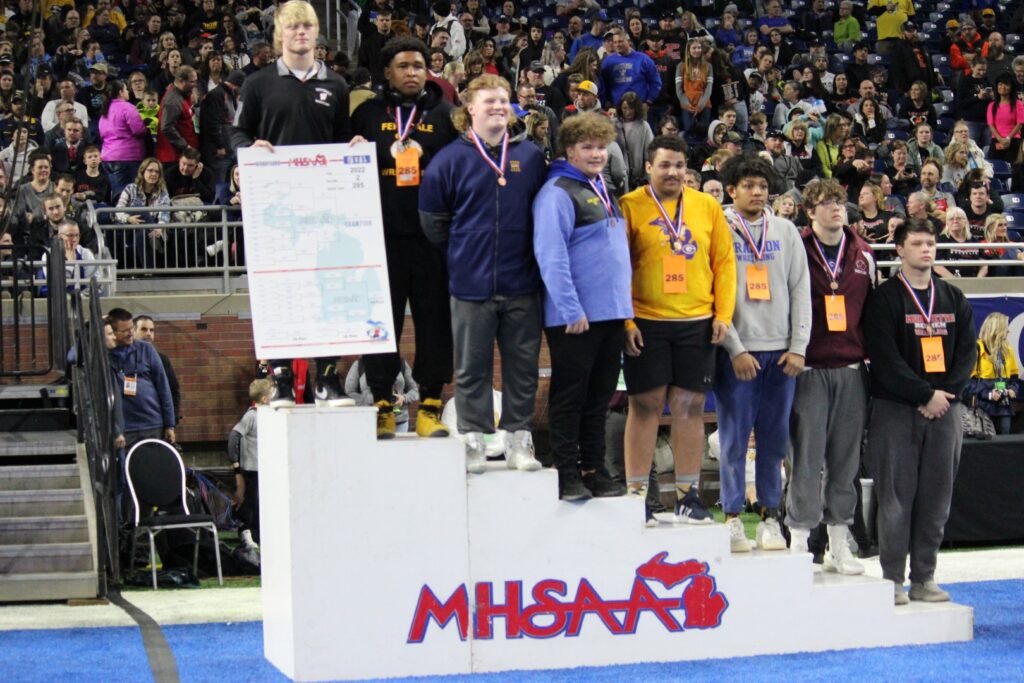 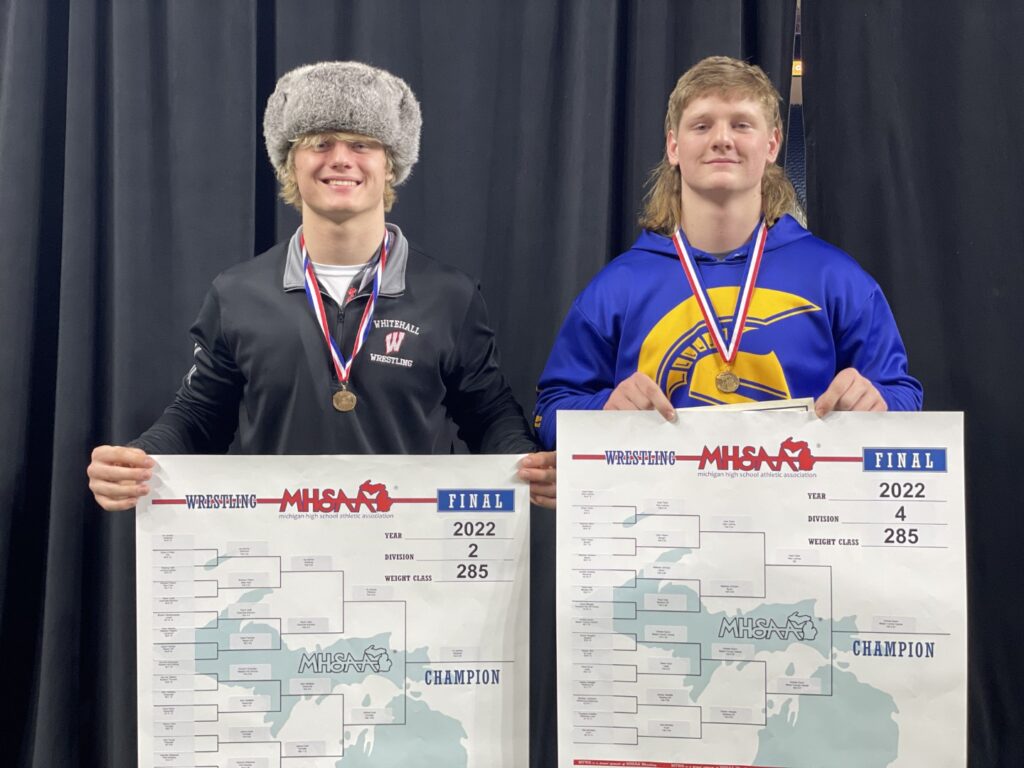 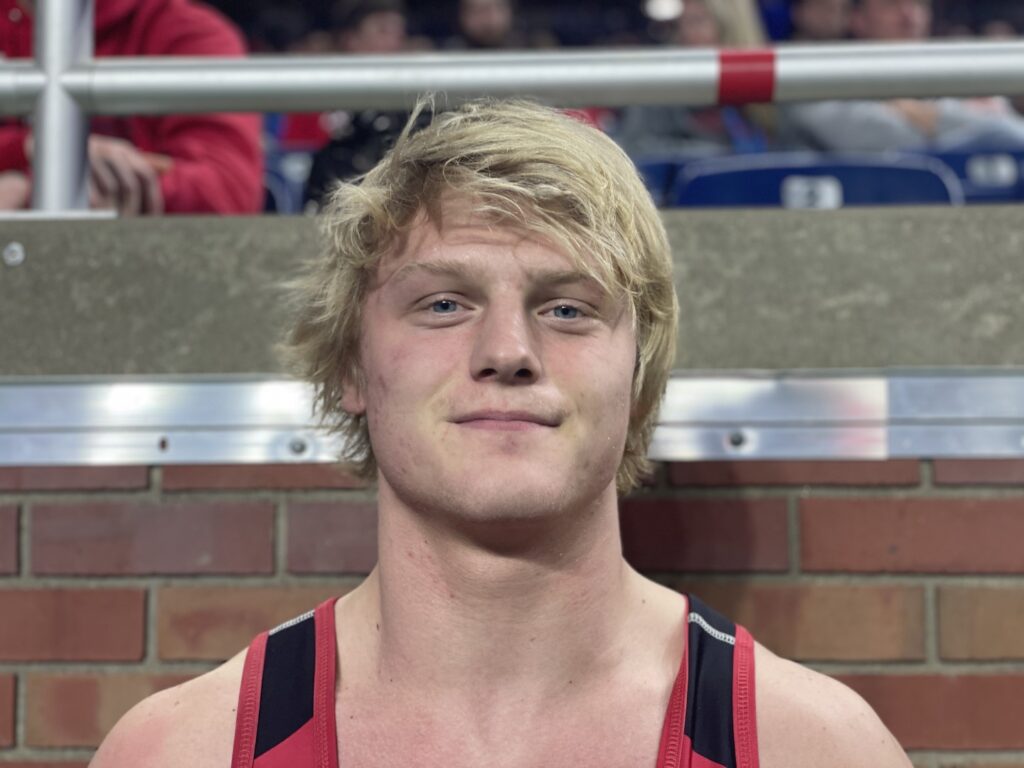 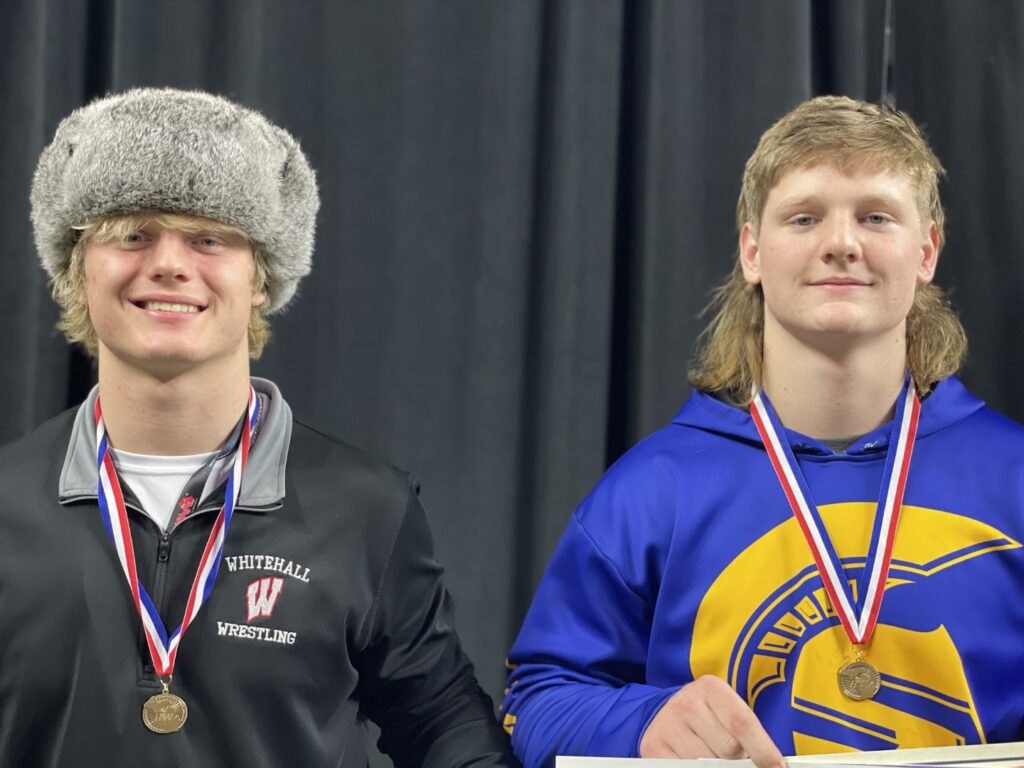 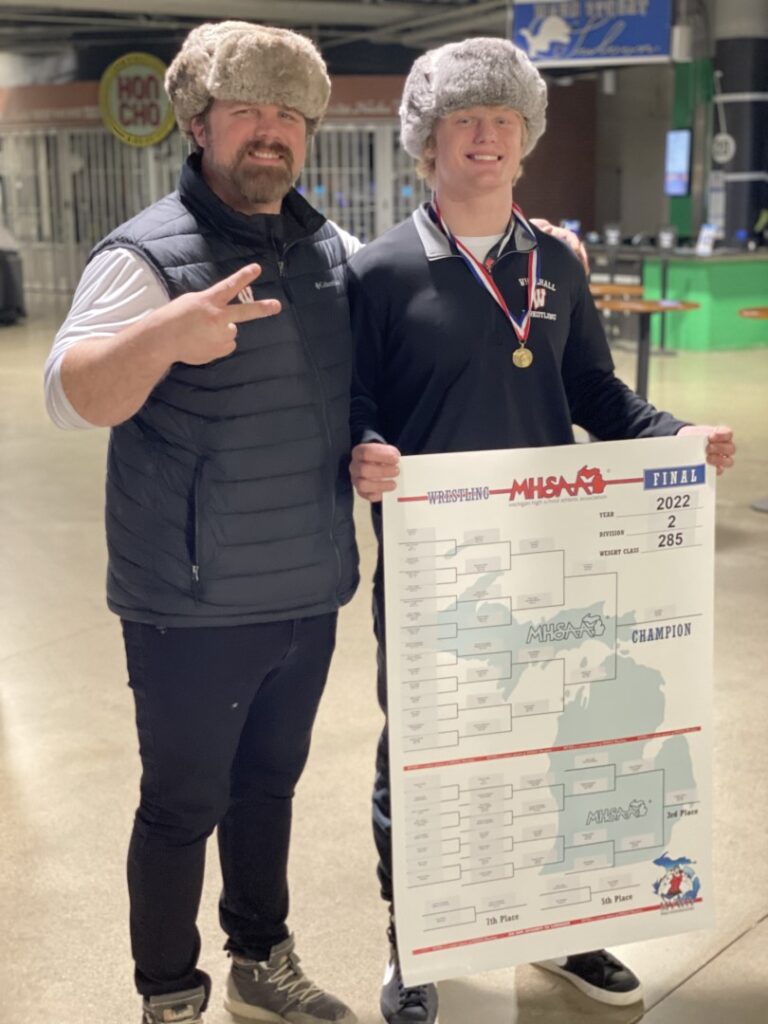 The history-making Whitehall senior wrestler broke into “The Griddy” on the mat after he quickly took care of Ferndale senior Joshua Cook in a battle of unbeatens in Division 2’s 285-pound title match Saturday at Ford Field.

Jenkins is typically very businesslike with little showmanship, but this was his last hurrah.

Fun for Jenkins, but maybe not so much for Cook, who was pinned in 38 seconds. Jenkins’ dominant victory capped a flawless 52-0 season and ended Cook’s at 52-1.

Even more impressively, it put the final, fitting chapter on a spectacular career by Jenkins. The University of Michigan signee finishes with an overall record of 182-11. He topped 150 career pins this weekend at the finals.

Last season, Jenkins finished 39-0 in winning Division 3’s 215-pound championship and he set a state record for shortest time on the mat in recording 10 first-period pins. He achieved that record in 449 seconds (7 minutes, 29 seconds).

This state-title run was equally as dominant. His total mat time was slightly higher at 486 seconds (8 minutes, 6 seconds), but take away an injury default in the regional and that time could have been nearly a minute shorter. Eight of his 10 victories en route to the individual state title came by pinfall, all but one of them in less than a minute.

“It feels good. It’s definitely something cool to do, going back-to-back undefeated seasons, pinning all the way through state. I thought it was pretty cool,” said Jenkins, a four-time all-stater, who placed third as a freshman (152 pounds, Division 3) and fifth as a sophomore (171 pounds, Division 2).

Whitehall co-coach Justin Zeerip knows first-hand what greatness looks like on the mat.

In his stellar career with Hesperia High School, Zeerip was 260-0 with 203 career pins. Like Jenkins will be doing, Zeerip went on to wrestle at U-M.

“Yeah, he’s really special. I’m really proud of him. He’s gone undefeated the last two years, but not only going undefeated, but the way he’s done it, pinning pretty much every guy he’s wrestled,” Zeerip said. “He just does all the right things all the time. I think he’s going to do great things at Michigan. I’m really excited for him.”

When Jenkins took up wrestling several years ago, he was a “gumpy kid,” according to his father.

Jenkins took his lumps in the early going, but through hours of work, miles of travel for training and top competition, and a whole lot of sweat, he’s now the one dishing out the pain.

“I think my younger self would be really proud of how far I’ve come,” he said with a laugh.

“Lots of (blood, sweat and tears) over a lot of years. That’s been probably the biggest help is going and getting those extra practices. Traveling down to Indiana and all the way across the state to Lansing, Grand Rapids, just all those extra hours. My dad, he’s been really, really good with that. I owe a lot to him.”

Whitehall co-coach Collin Zeerip, who like brother Justin also starred at Hesperia and later wrestled at U-M, said it’s pretty rare to see somebody as dominant as Jenkins has been the last two seasons.

Collin Zeerip noted that Jenkins is one of the hardest workers on Whitehall’s team, which made it to team state finals weekend for the second straight season. The Zeerip brothers said that Jenkins does all the right things, all the time.

Jenkins entered this season around 225 pounds. For Saturday’s 285-pound title match, he said he weighed 218.

At Michigan, he plans to wrestle heavyweight. Jenkins plans to keep soaring, including as a fighter pilot in the future. That’s still one of his dreams.

“I think I’ve got still a lot of growing to do. I mean, every room I’ve gone to, I just slowly work my way to the top pretty much,” Jenkins said. “I plan on doing that at Michigan, however long it takes and get better every single day. I mean, I’ve got so many good coaches and influences there.

“I think my first two years (at Whitehall), I had some setbacks obviously, especially my sophomore year. I took a pretty big beating there. Just stayed locked in, doing what I was doing – all the extra work and stuff – and came back and had two really dominant seasons.”