Don’t overlook her, however. As a leader for Mason County Central’s ever-improving competitive cheer squad, she is the complete package.

An MCC junior, Adams is a strong, athletic and spunky tumbler for the Spartans, who last year captured the program’s first district championship and placed eighth in the Division 4 state finals at the Delta Plex in Grand Rapids.

Adams is reasonable in her team’s goals this season. Regardless of where the Spartans finish, she is simply seeking improvement. At the same time, don’t expect her to back away from the challenge of competing at a high level again.

“What drives me is myself. I’m a determined person,” said Adams, the daughter of Elizabeth and Daniel Adams. “If I want something, I’m going to get that – I’m going to push myself to achieve it.”

This season, Mason County Central’s competitive cheer team features six seniors, two juniors, three sophomores and two freshmen. In each of the three choreographed rounds of a cheer meet, the Spartans have six girls on the mat at a time.

After the meet, Hart’s seniors gave props to Mason County Central’s squad for the improvements that the Spartans have been making and how hard they’re working.

Adams helps to set that tone. 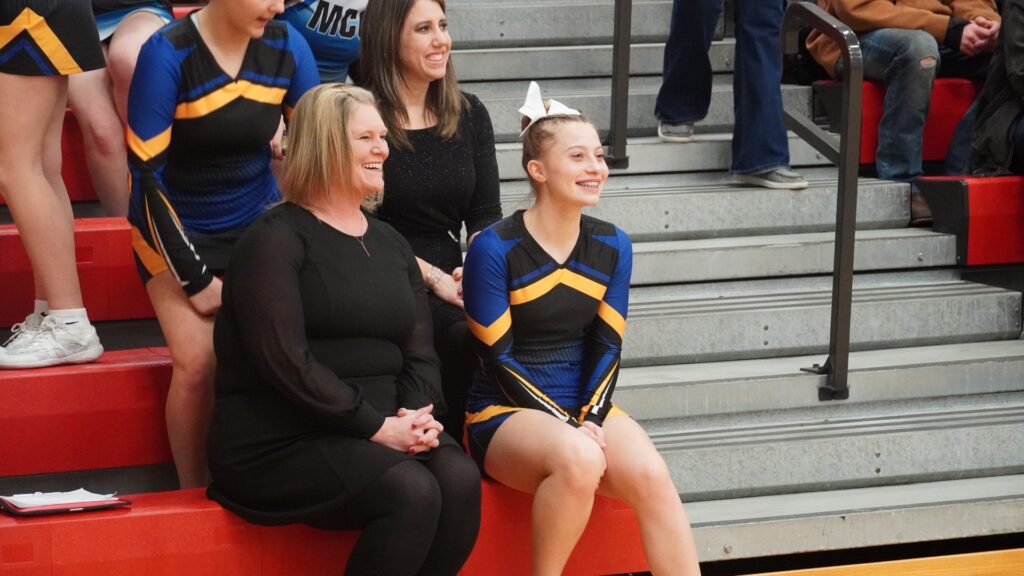 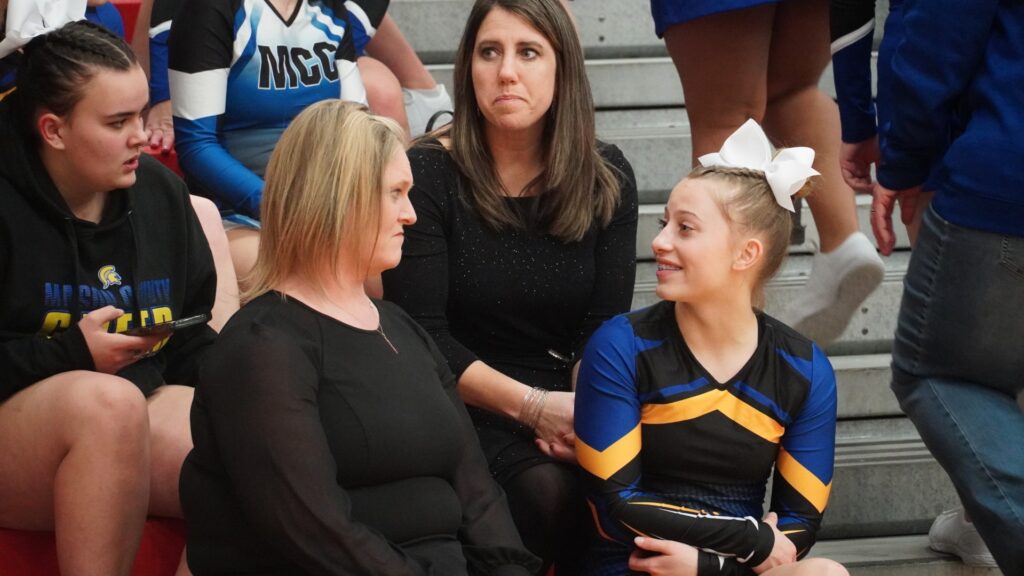 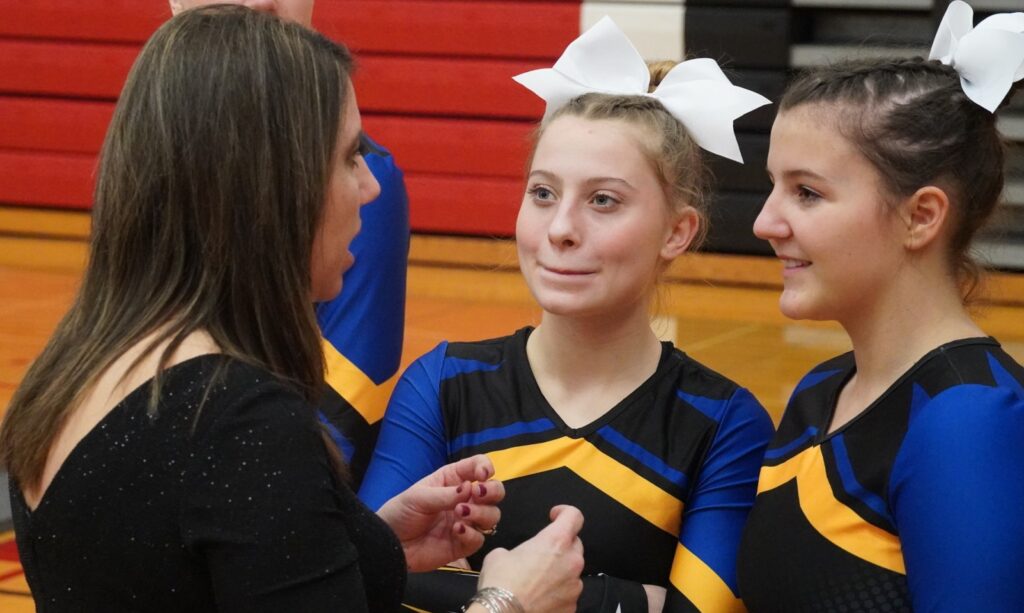 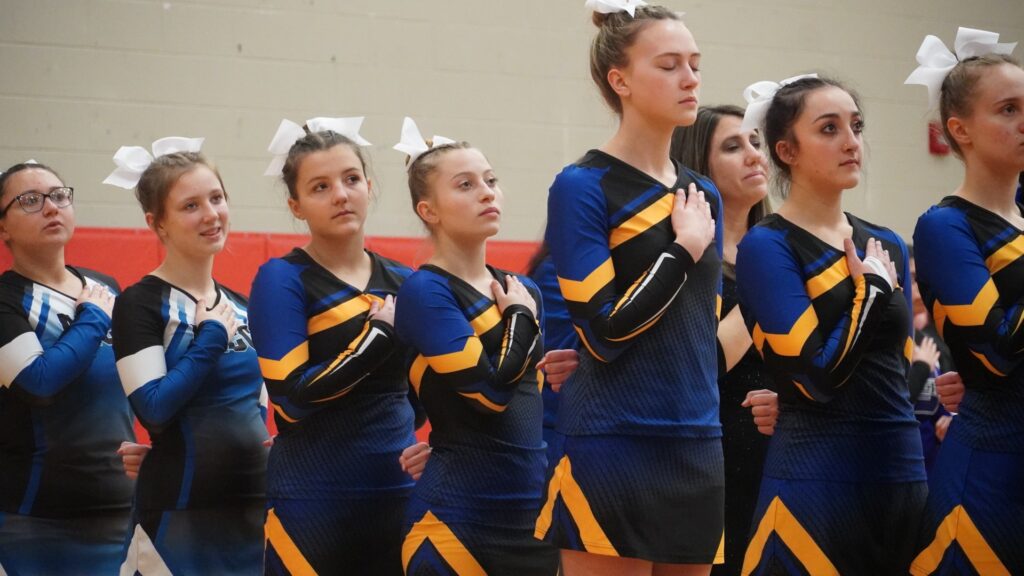 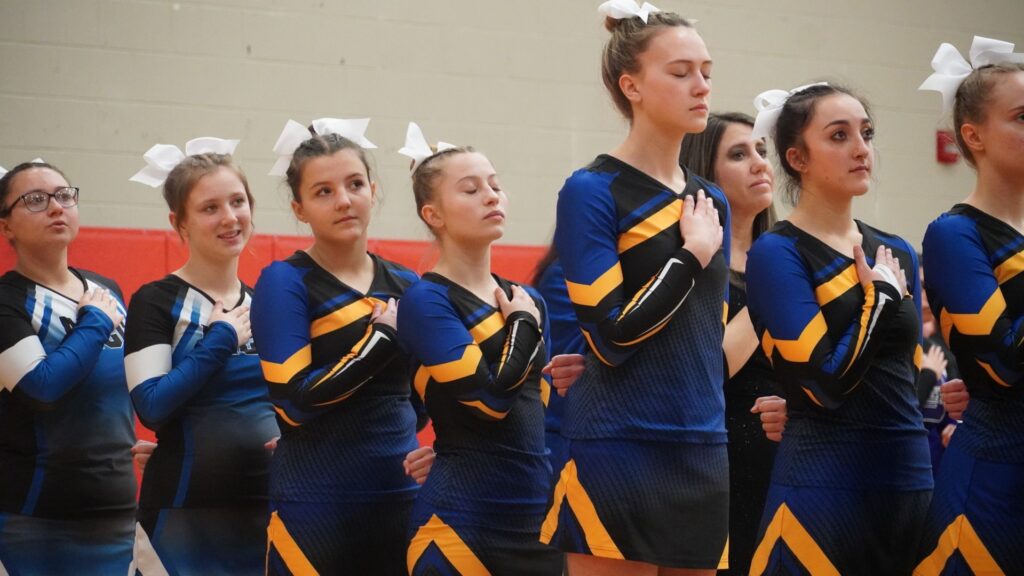 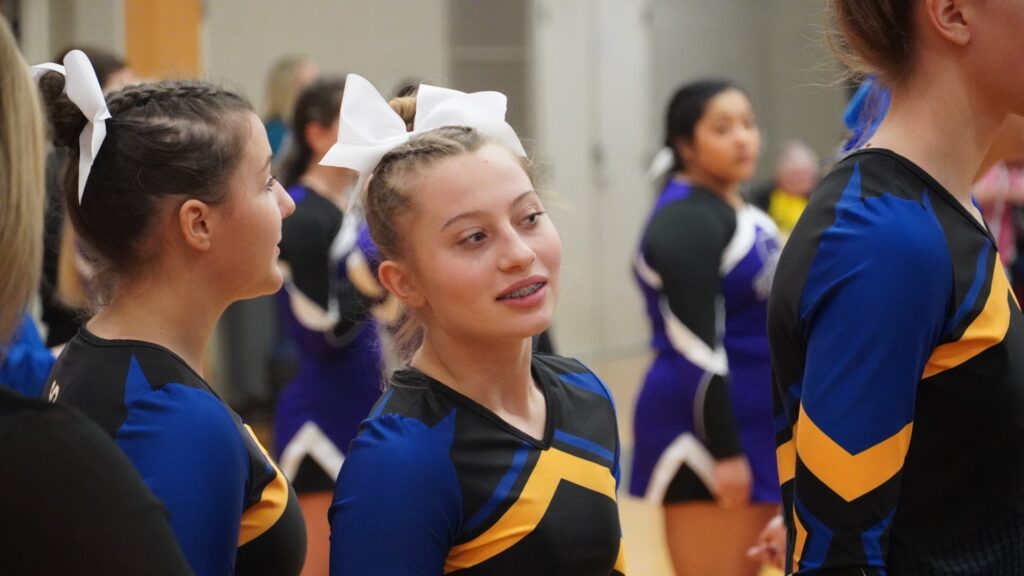 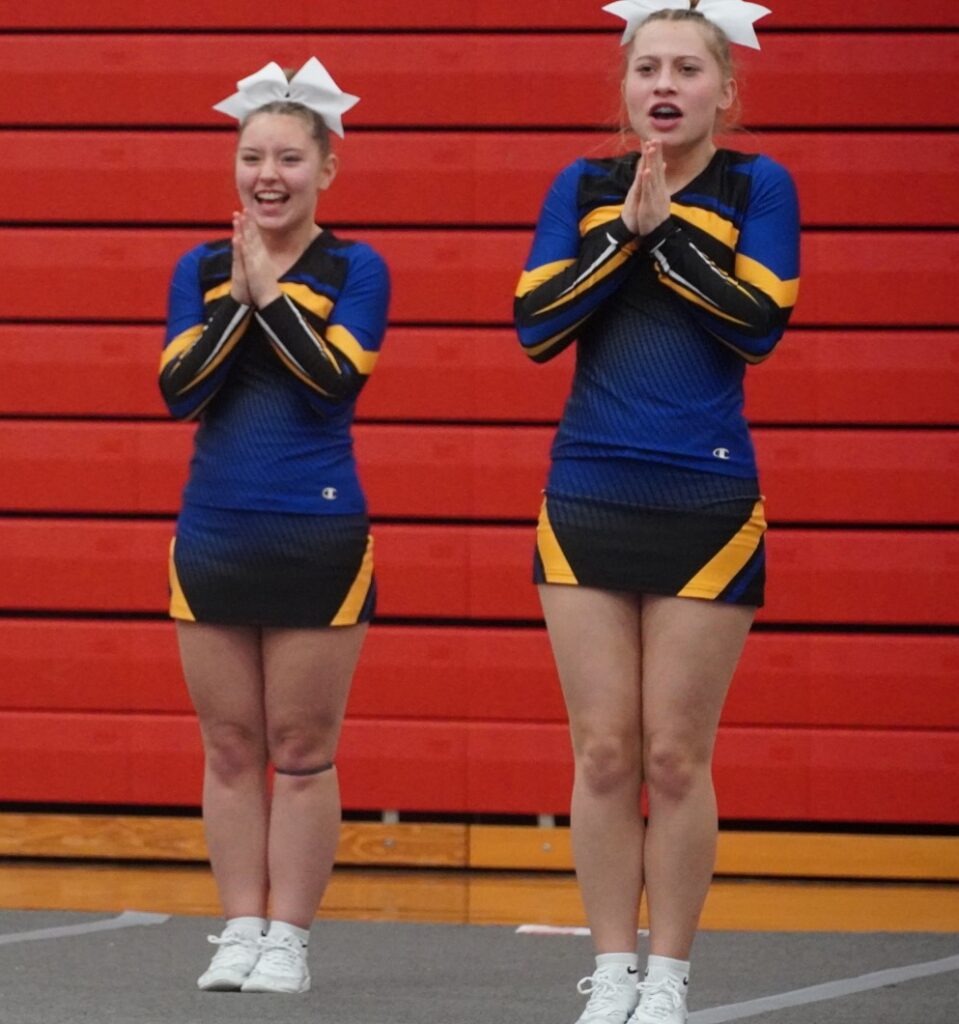 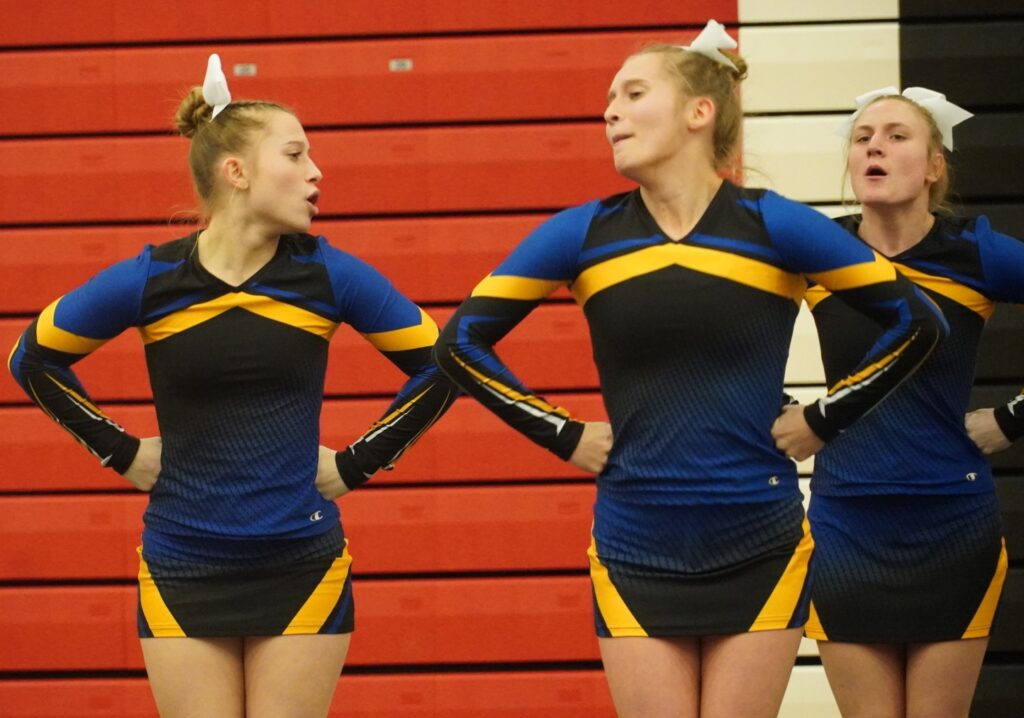 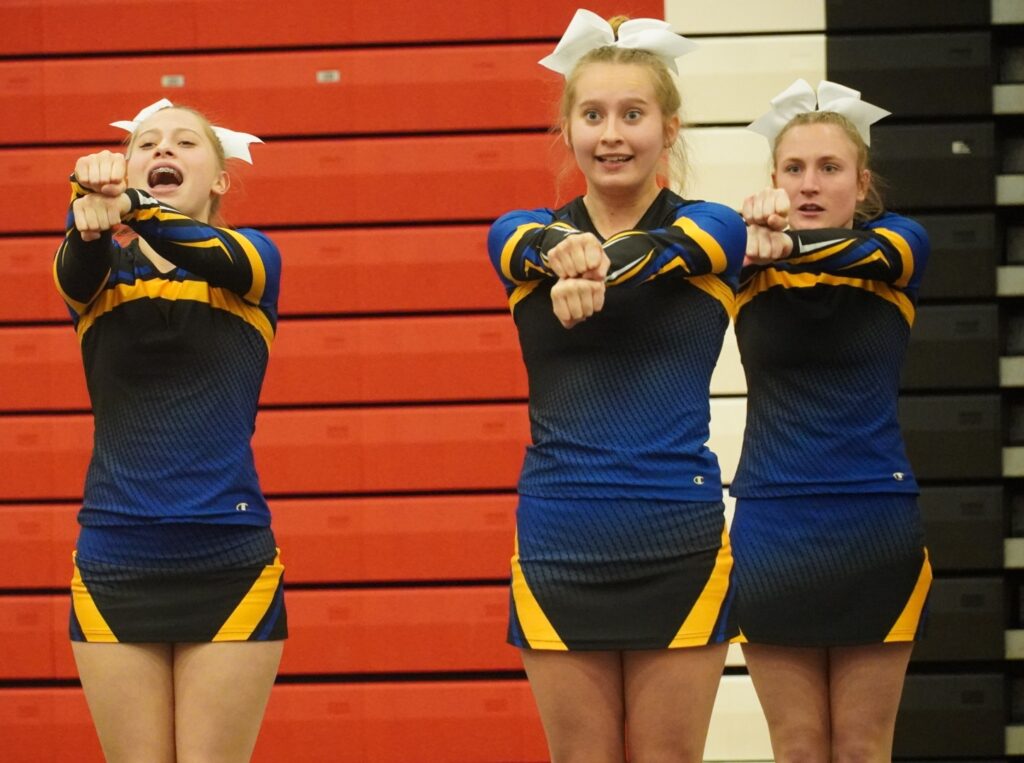 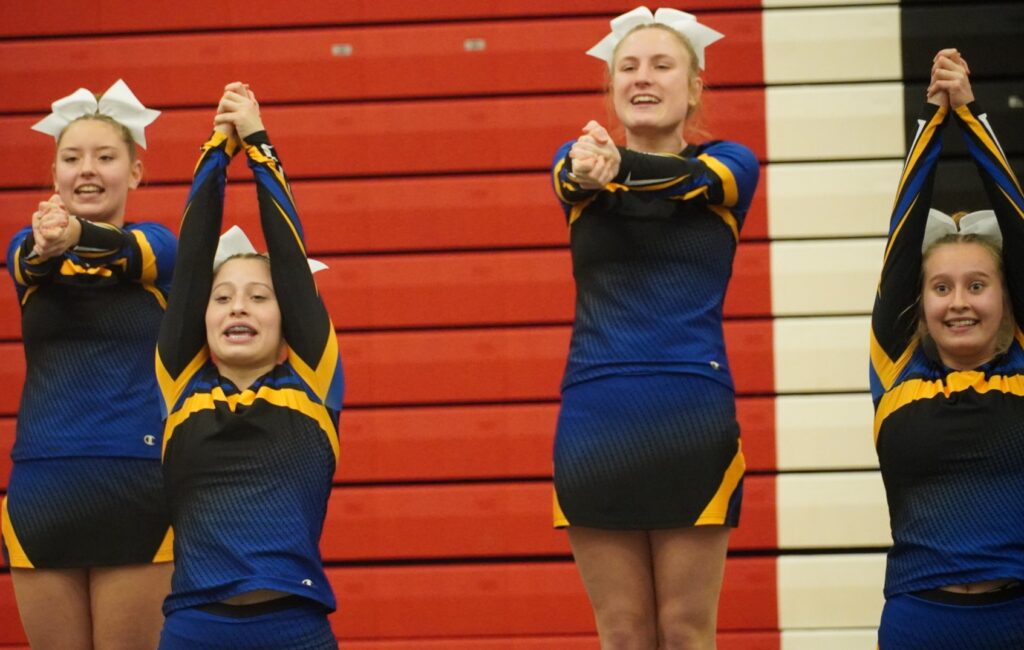 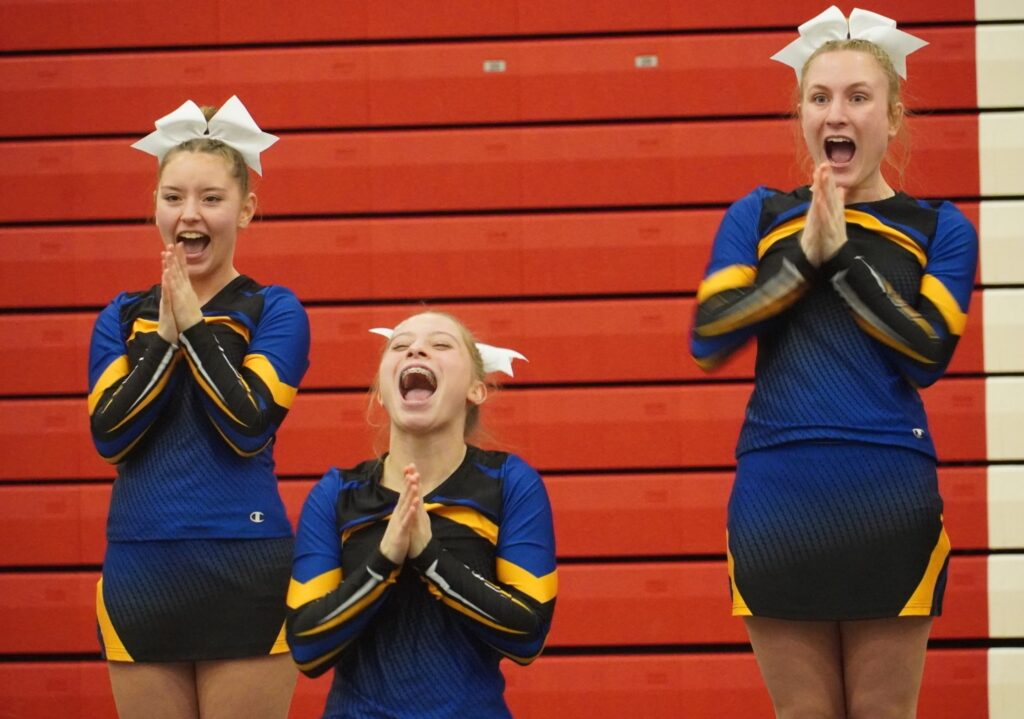 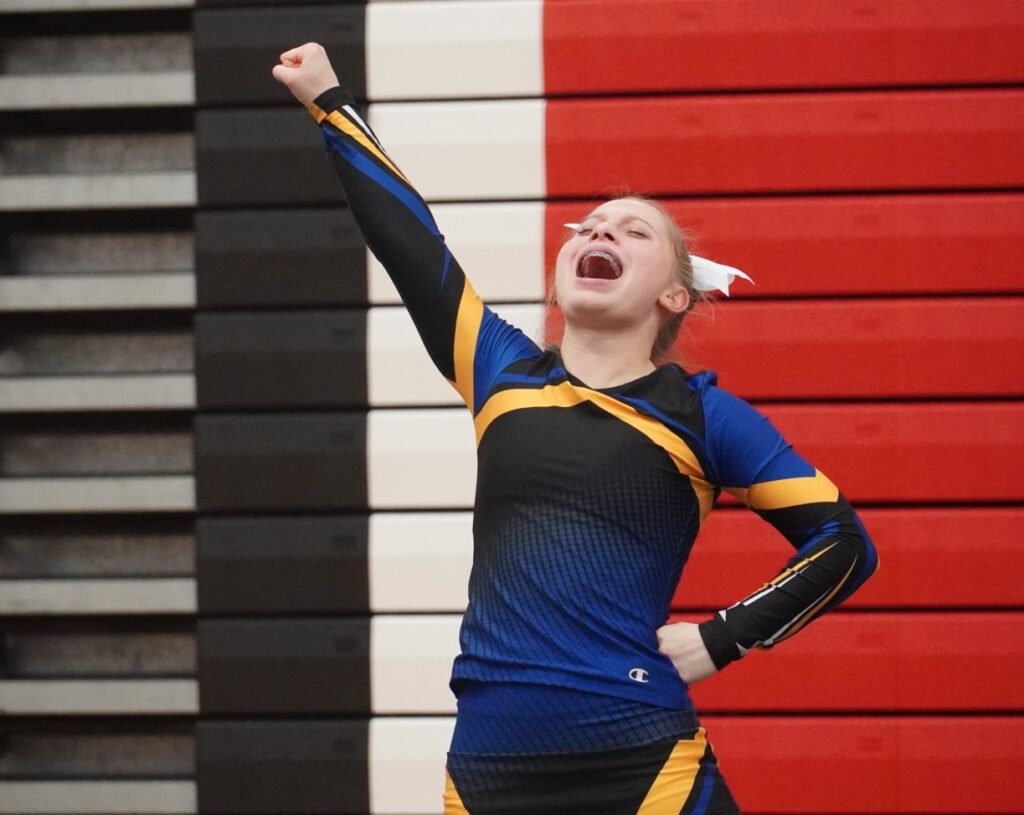 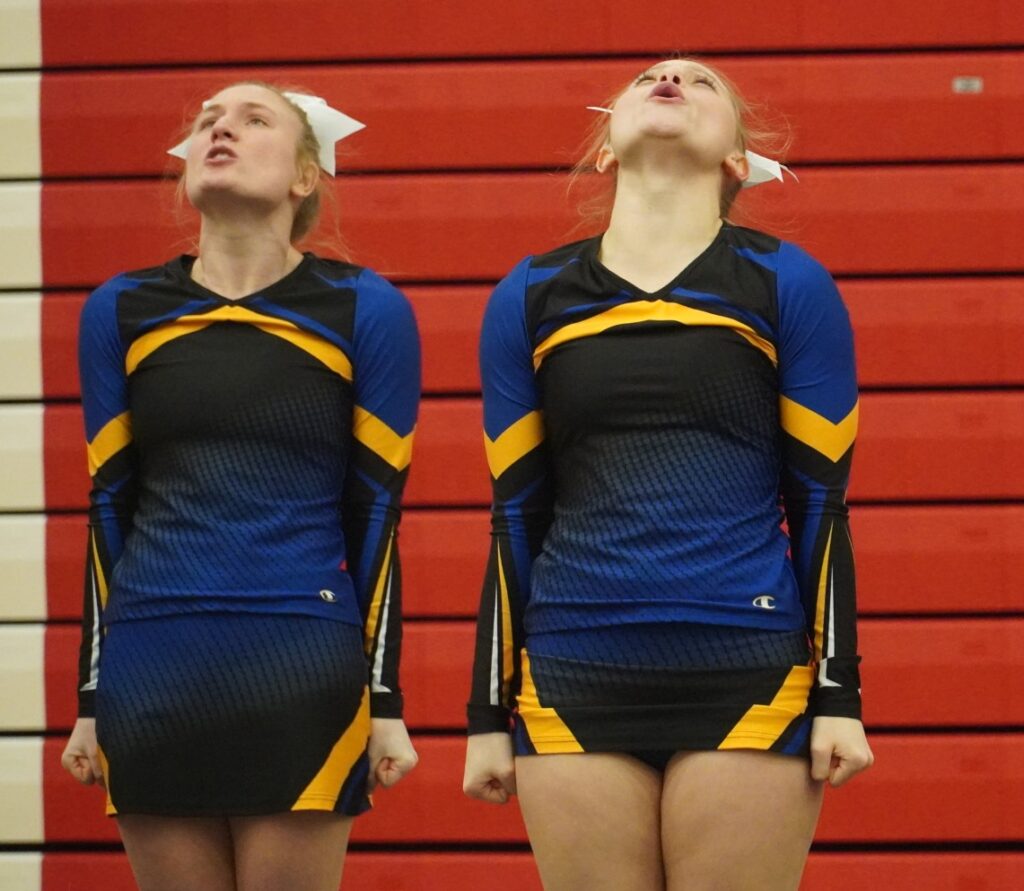 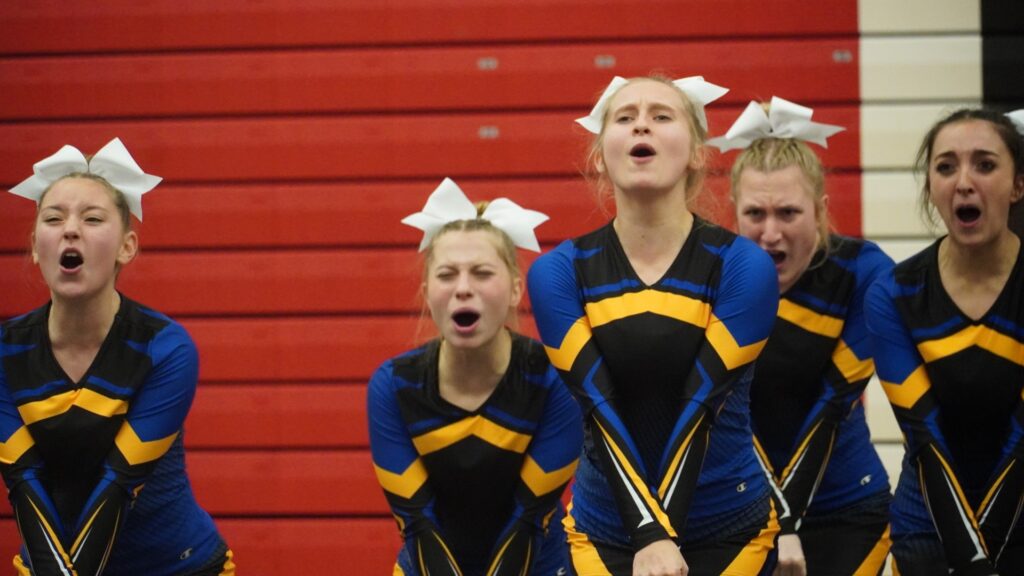 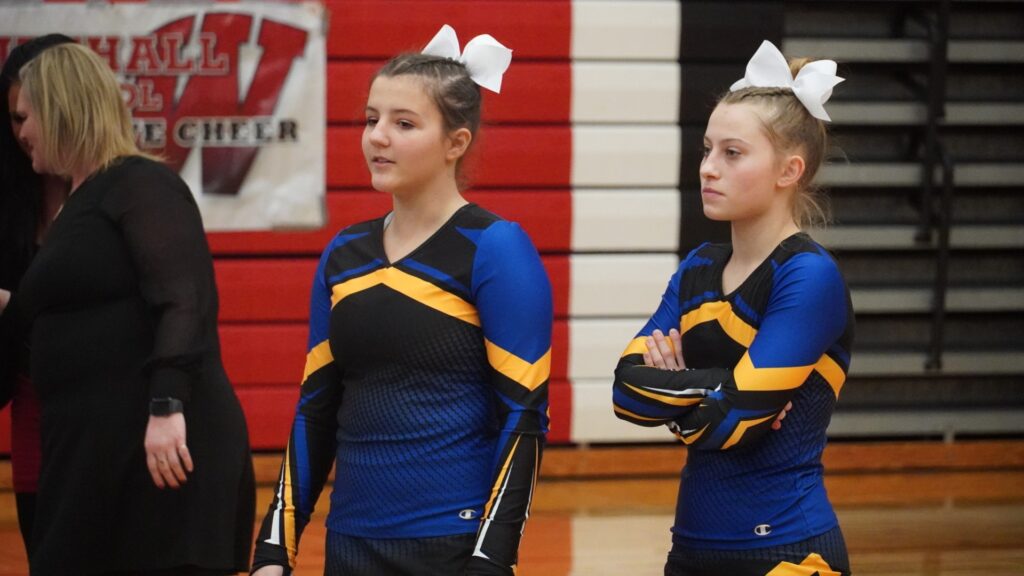 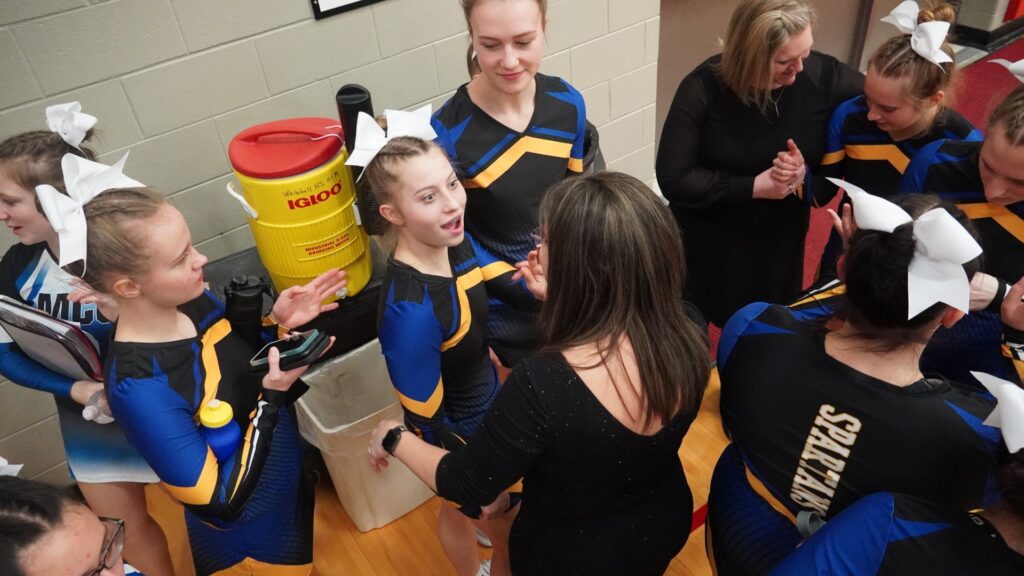 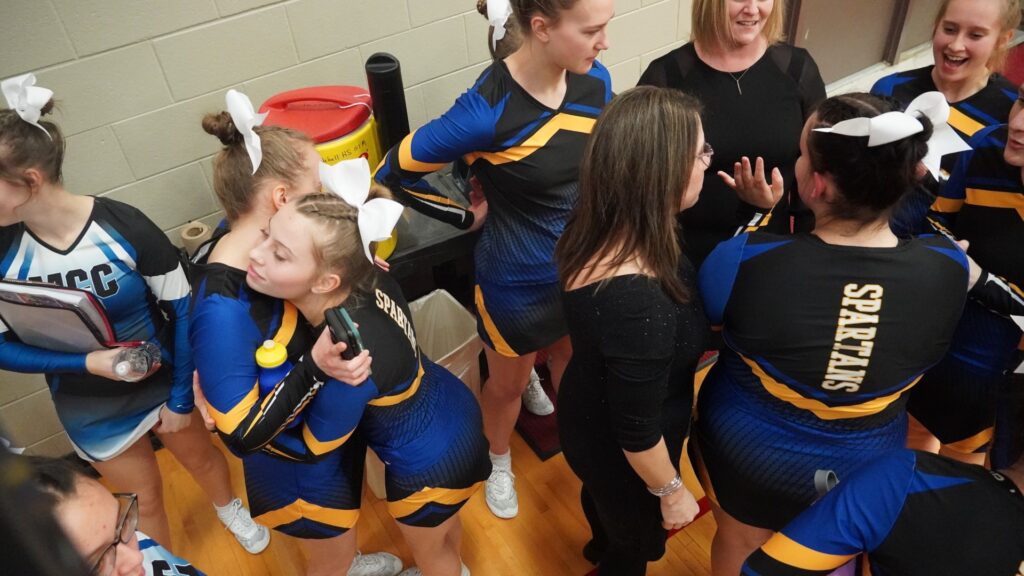 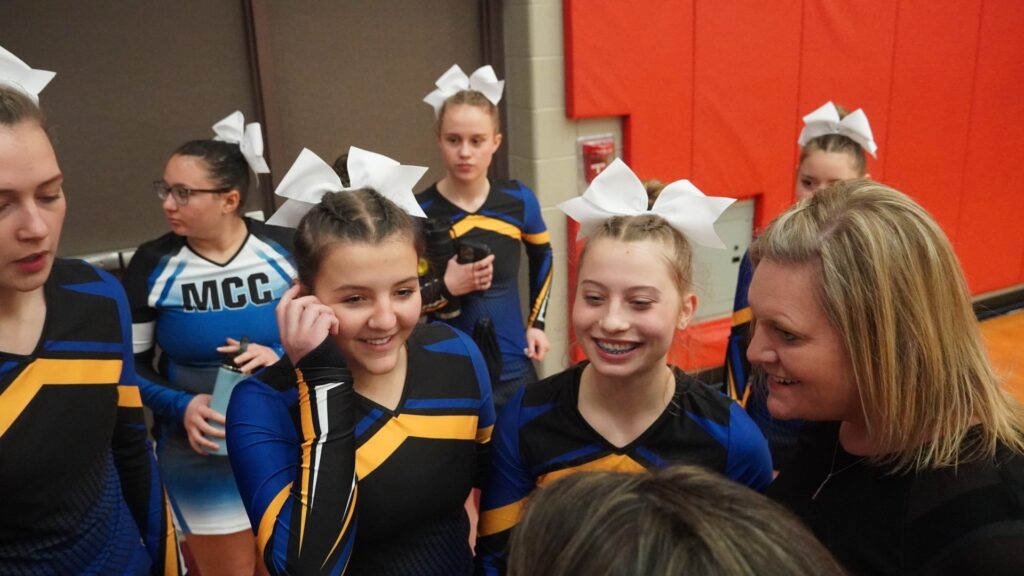 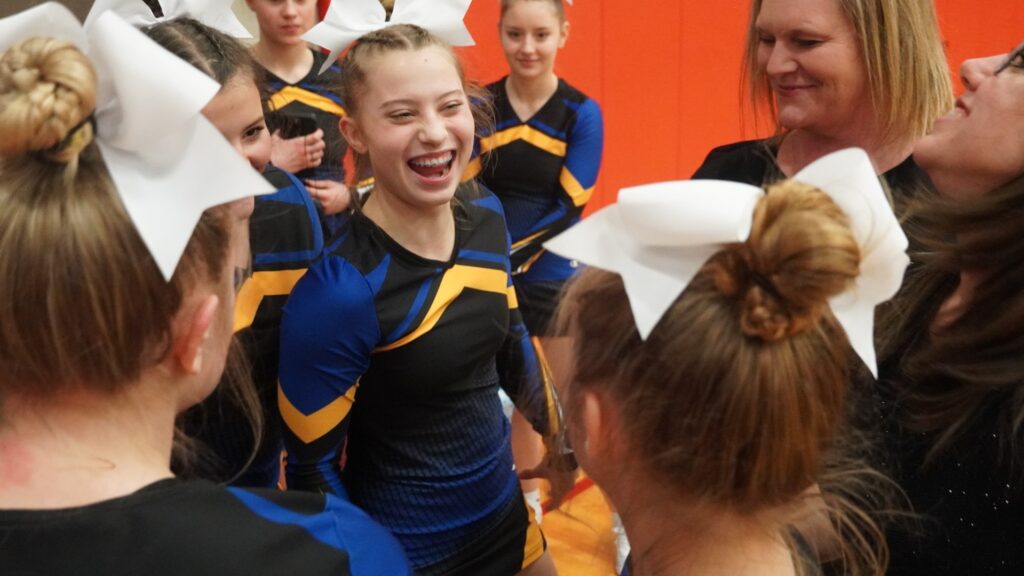 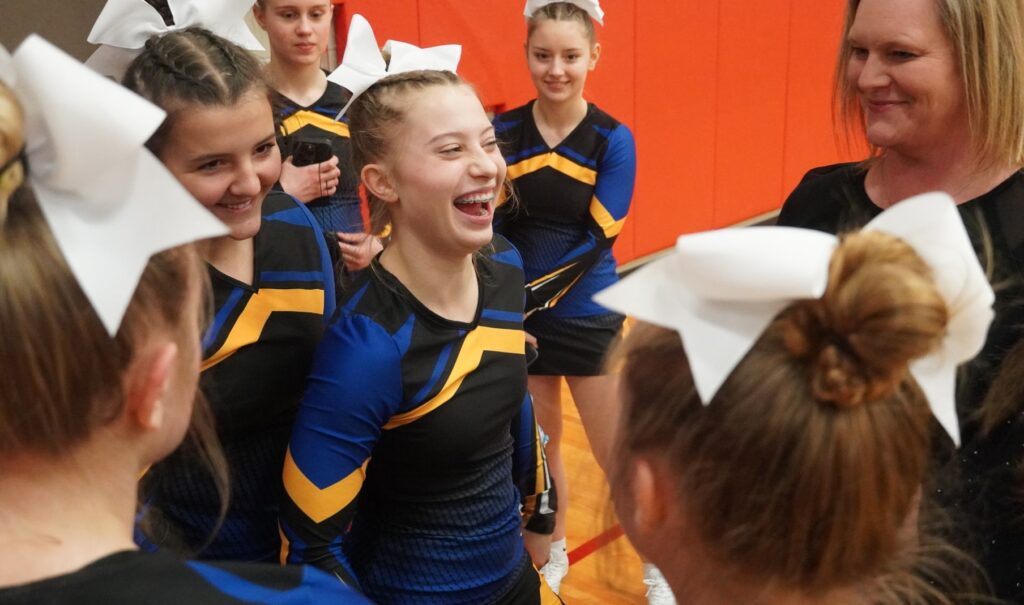 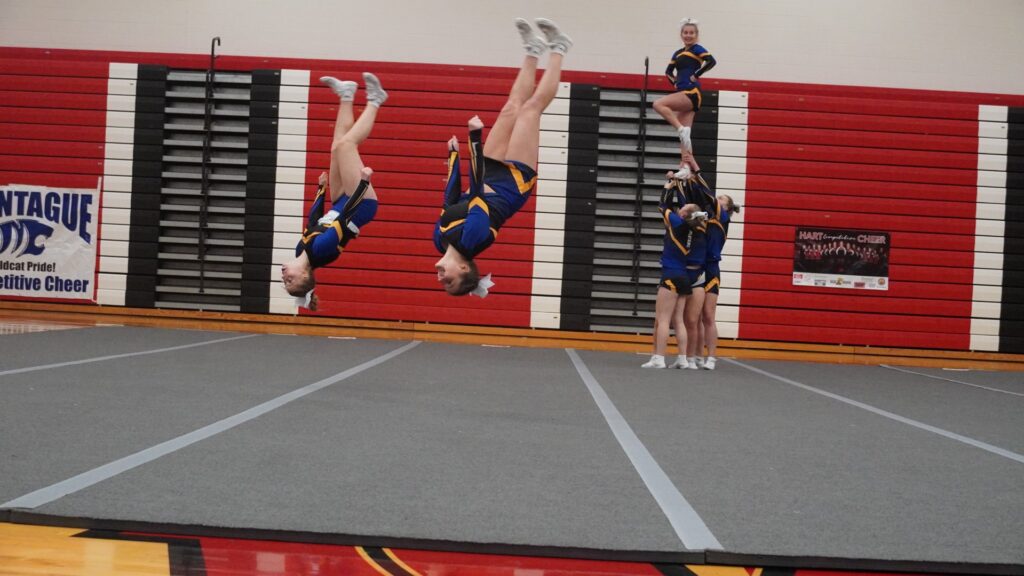 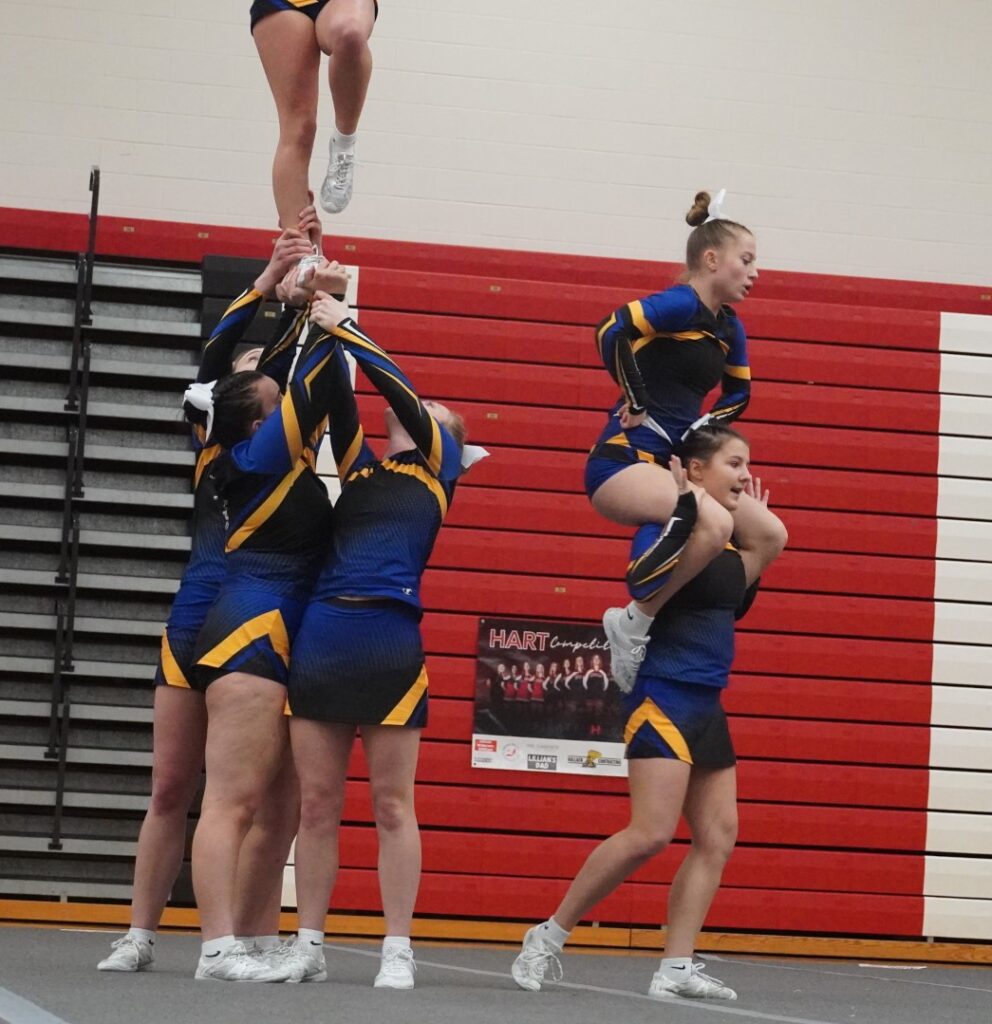 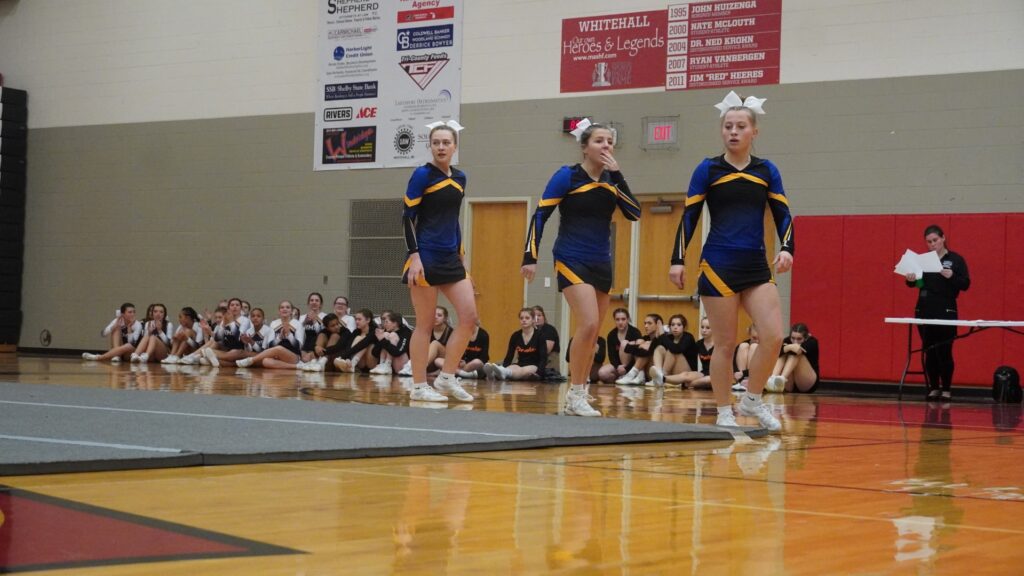 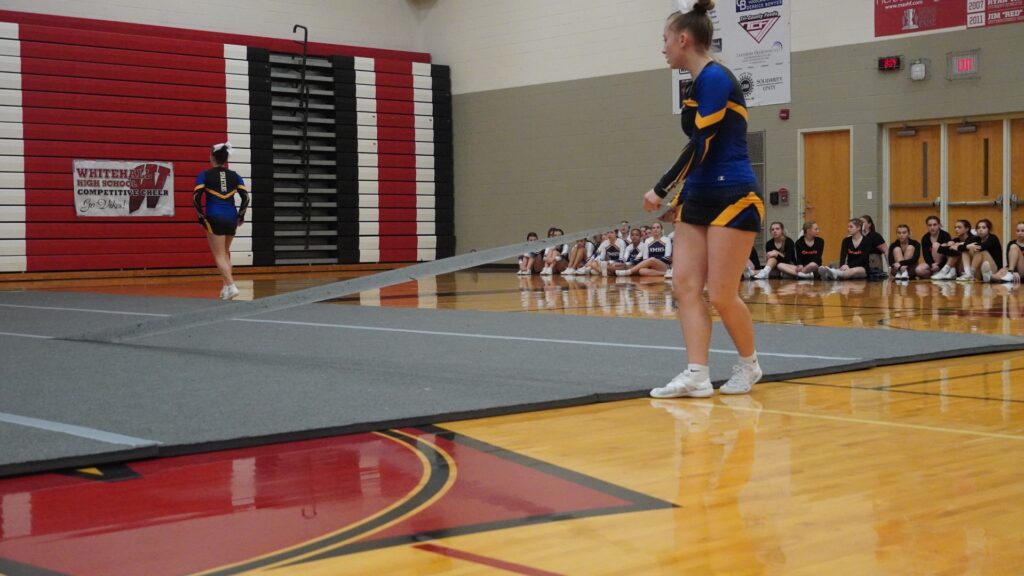 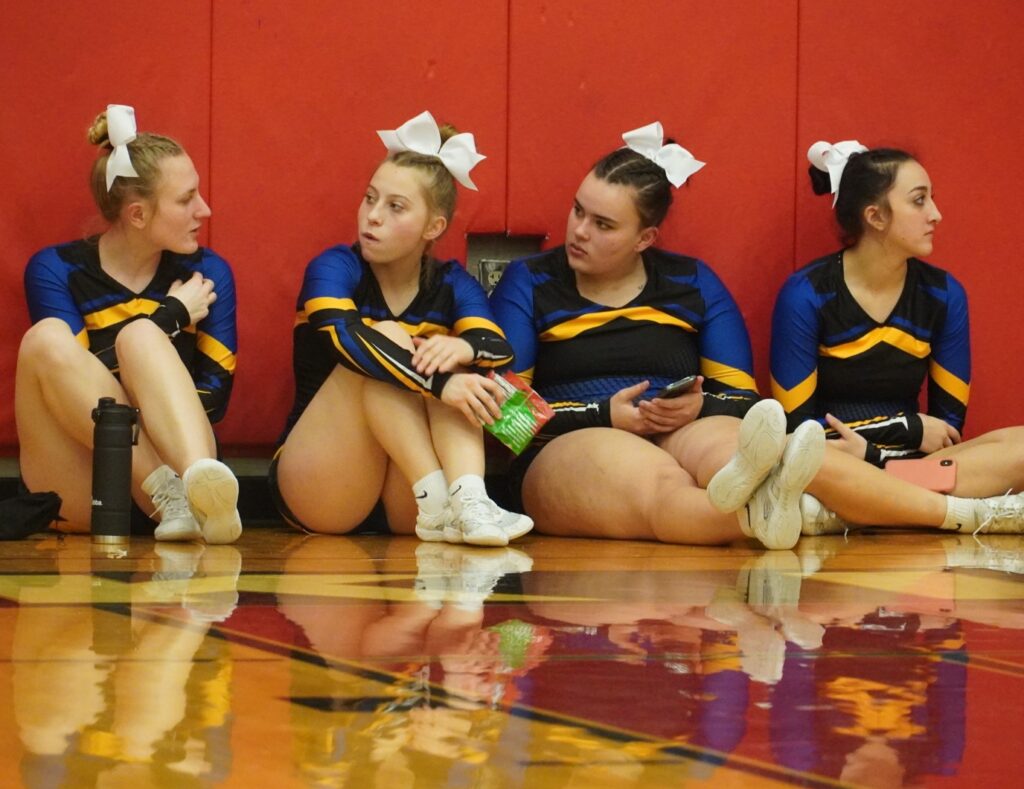 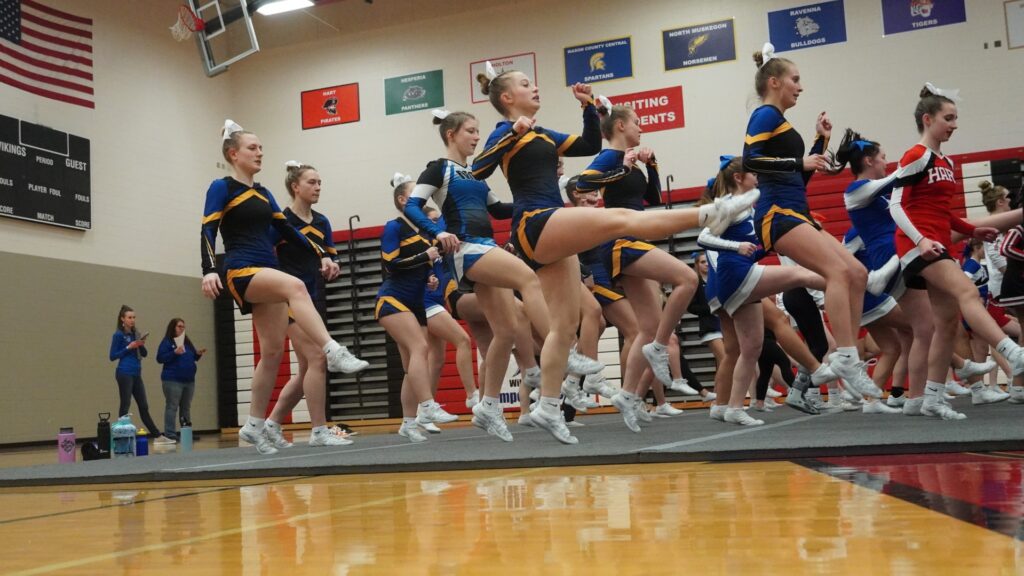 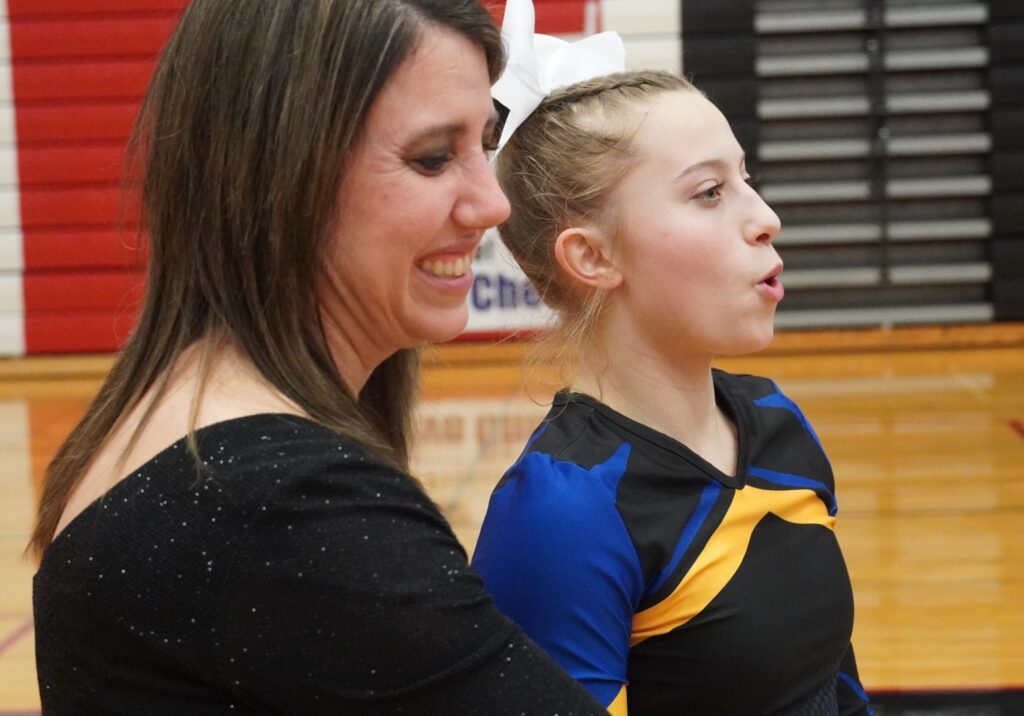 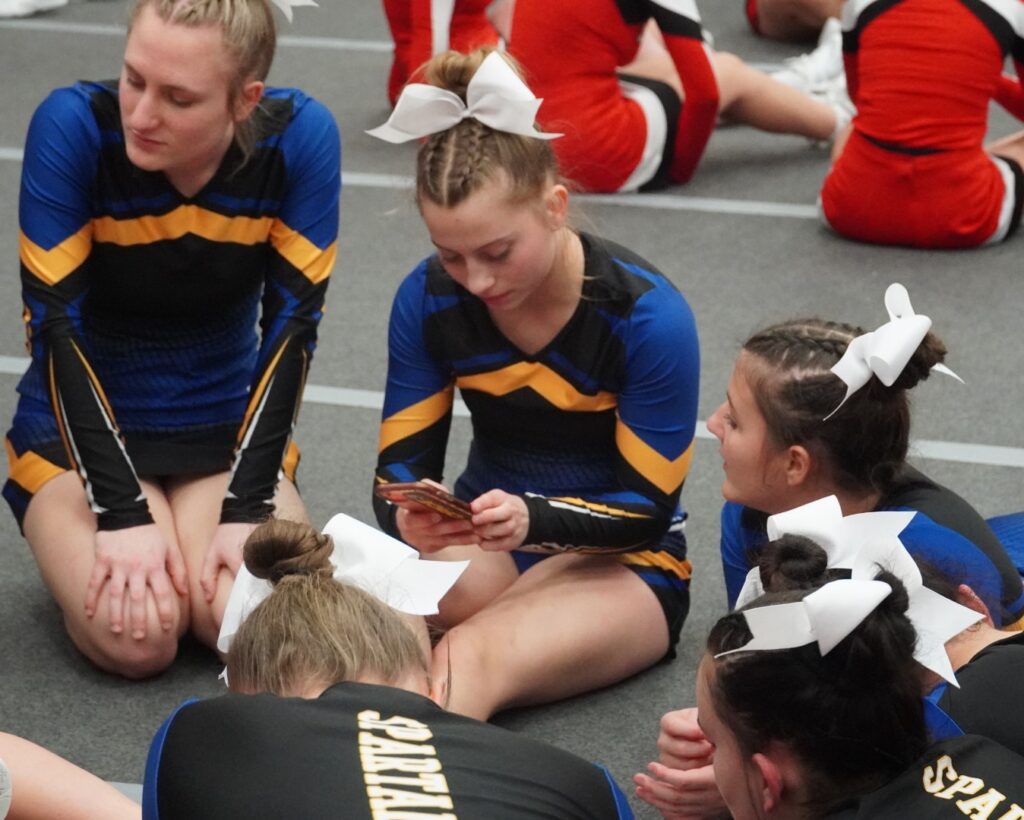 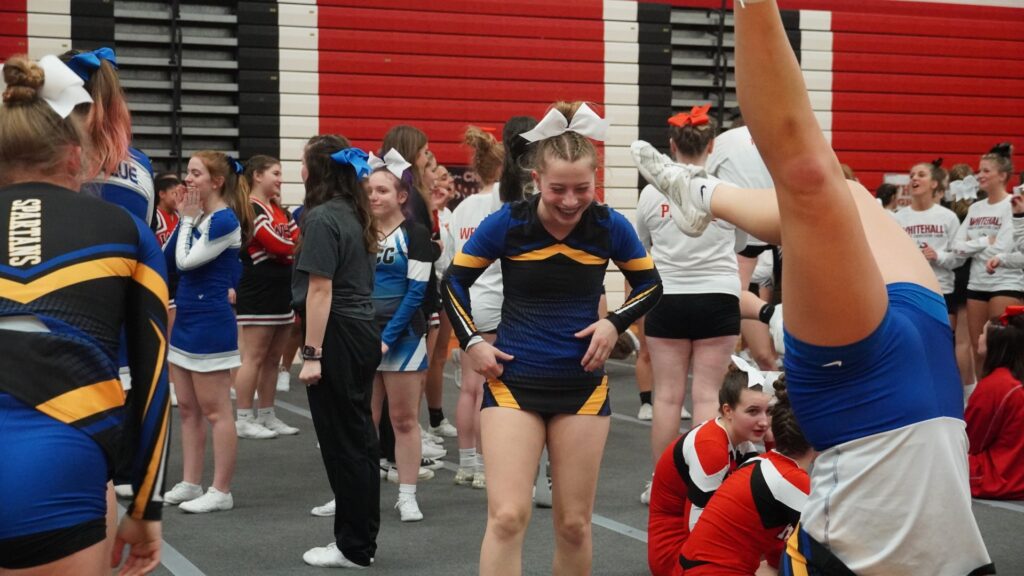 “She has been working so hard,” Mason County Central coach Cheri Stibitz said. “There’s another lady that does some tumbling with her and they are working their butts off every day at practice to make sure that they are on time, doing the same exact things – perfect arm motions, landing the same way – and they’re just getting better and better together and so that’s really important to note.

“Emily is working really hard and improving every day.”

Adams possesses the aforementioned determination, plus she has some strong bloodlines when it comes to competitive cheer.

“I just bring my experience that I have had and my knowledge of what I have done as a cheerleader — the drive that they need to have and encouraging them; my gymnastics skills that I’ve done,” Elizabeth Adams said.

“I try to help instill that in the girls that are competing now because I think one thing we learned a lot last year going to states is we need to have higher-level skills walking in on Round 2, so we’re really pushing that this year and practicing and trying.”

While her mother has a background in gymnastics, Emily Adams has honed her skills in dance. She said it’s been a large part of her foundation for others skills in life because dance requires one to use many muscles and it builds strength.

Dance also helps with conditioning, so that when Adams was a freshman competing against seniors for a varsity position two years ago, she was better-equipped by having control of her body.

One thing she cannot control: Some of the comments from naysayers, such as “Cheer is not a sport.” The doubters drive her even more, and she does have something to say about them.

“I would say I’m a pretty easy-going person and I’m like, ‘You know what, think what you want. You’re not the one who has to participate and do all of the hard skills,’” Adams said.

“It’s frustrating to me when people look down on the sport when they could not come anywhere near to doing what we have to do.”

The first two rounds of a competitive cheer meet last 90 seconds, followed by the two-minute third round. The rounds feature stunts, jumps and tumbling.

The performances are choreographed. Strength in body and vocal chords, along with stamina, coordination and timing, are crucial. And you have to be holding a smile for the audience while not breaking concentration for the physically demanding acts.

Adams tore the MCL in her knee in cheer during her freshman year when she landed wrong on a backflip. As a sophomore, she re-injured it while sliding in softball.

Adams keeps pushing, however. Last season’s competitive cheer state finals experience is something she’ll never forget and it drives her to do more.

“It was like a breath of fresh air. We got this whole new experience,” she said. “I mean, coming from this small school, you don’t always see these big places. It really helps with, like, your dreams and your goals, seeing all these amazing teams.”