For Montague multi-sporter Colton Blankstrom, baseball is No. 1 — it’s in his blood

MONTAGUE – Colton Blankstrom has experienced some absolute thrills as a three-sport athlete at Montague High School.

He played at Ford Field and helped the Wildcats cap an unbeaten season with a state football championship in 2020. He played a key role in Montague winning a share of a conference baseball title last spring, clinched in a thrilling, 14-inning victory over North Muskegon under the lights at historic Marsh Field.

But when it comes to those adrenaline-filled moments vs. the blend of tranquility and anticipation encountered while hunting and fishing, it’s tough for Blankstrom to pick just one passion.

“The 14-inning game against North Muskegon — like, that’s probably one of the biggest (thrills) that I’ll probably never forget,” he said. “I mean, hunting, you never know what you’re going to see, what’s going to come out. Like, maybe a 10-point or something like that. And then fishing, it’s just every cast could be something new, so to be honest they’re all kind of equal.

“When you’re fishing, you’re outside and sometimes you go out there in the morning and you see the fog rolling over the water and you just sit there and you relax and you just look at nature and you breathe it in. It’s just relaxing to me.”

The baseball field seems to be the most natural habitat for the 6-foot-1, 180-pound senior, who is the son of Rick and Sara (Jager) Blankstrom. While he was a starting linebacker and tight end/receiver for the Wildcats’ football team and key rotational guy for the basketball squad, it’s baseball where Blankstrom thrives the most.

Baseball is the one sport Blankstrom, 18, plays or works on year-round.

Baseball is in his blood. Older brother Cameron Brayman was a baseball and football standout for Montague. Brayman, 24, now is a deputy for the Muskegon County Sheriff’s Office.

“I mean, I can’t explain (the feeling of coaching Colton). My dad coached me for a lot of years and when I got to high school, he stopped coaching me. I’ve been fortunate to do it all the way through,” Rick Blankstrom said. “But, yeah, you love to see your kids be successful and hopefully move on to the next level and play well there. It’s been a great experience.”

Blankstrom is Montague’s right-handed ace, who plays third base when not pitching, and he bats third in the Wildcats’ lineup. Last season, he posted a 7-3 record and 2.09 ERA while batting a team-best .431 with 18 doubles and one home run en route to earning MLive Muskegon Dream Team honors for the Wildcats (26-13).

So far this season, Blankstrom is 1-3 with 4.00 ERA, but Division 3 Montague (2-5 overall, 2-0 West Michigan Conference) has faced a ranked Division 1 team, two Division 2-rated squads and another D-1 opponent. He’s batting .333 with a home run, double and team-high six RBIs. 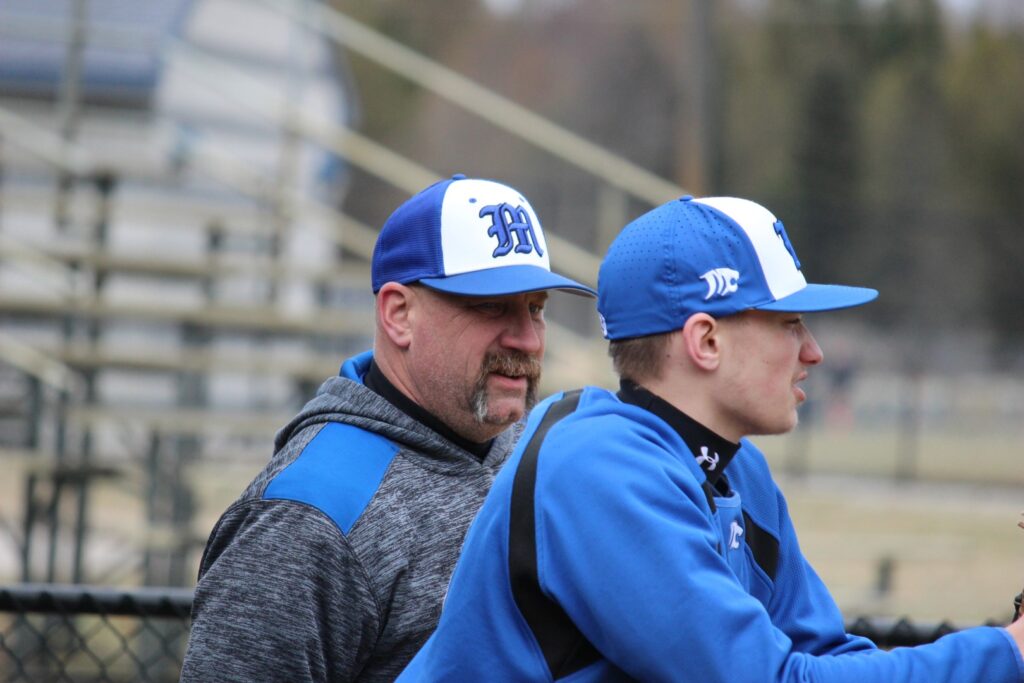 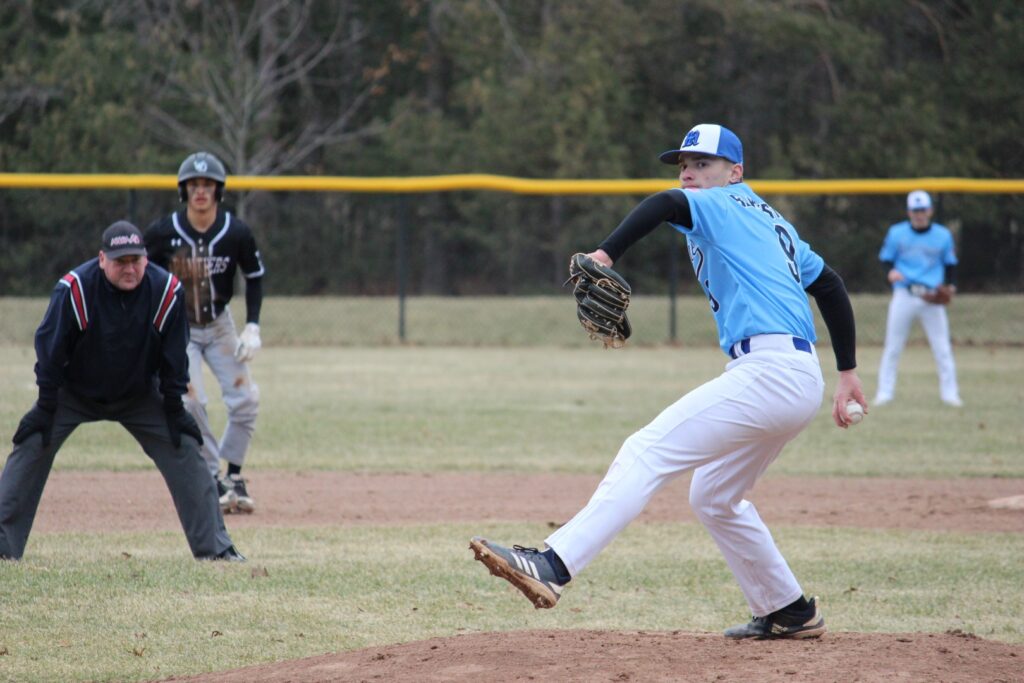 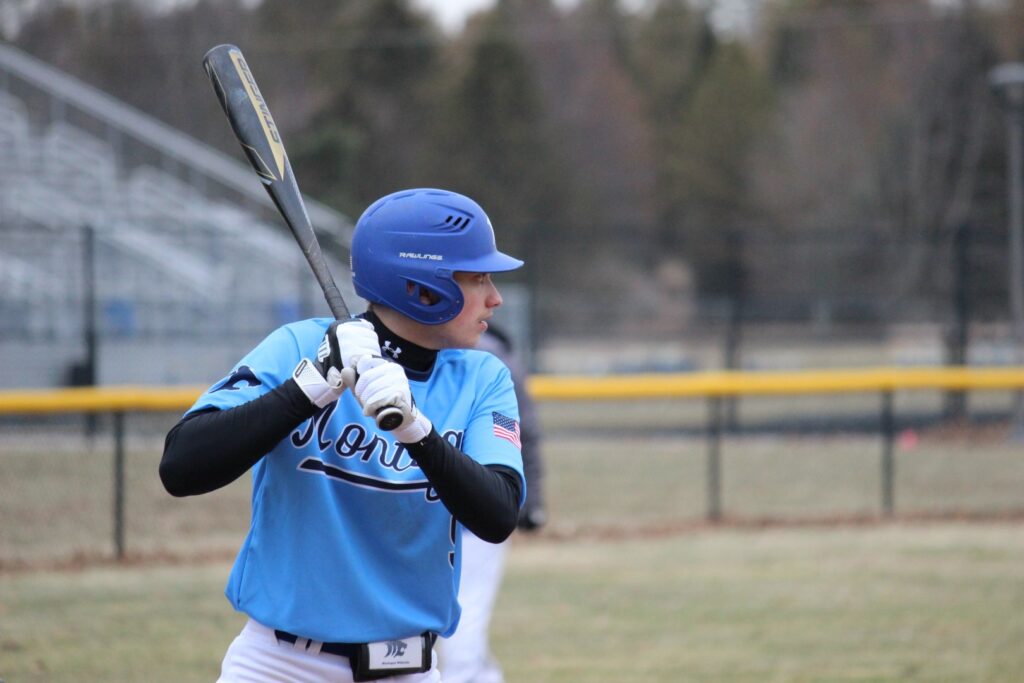 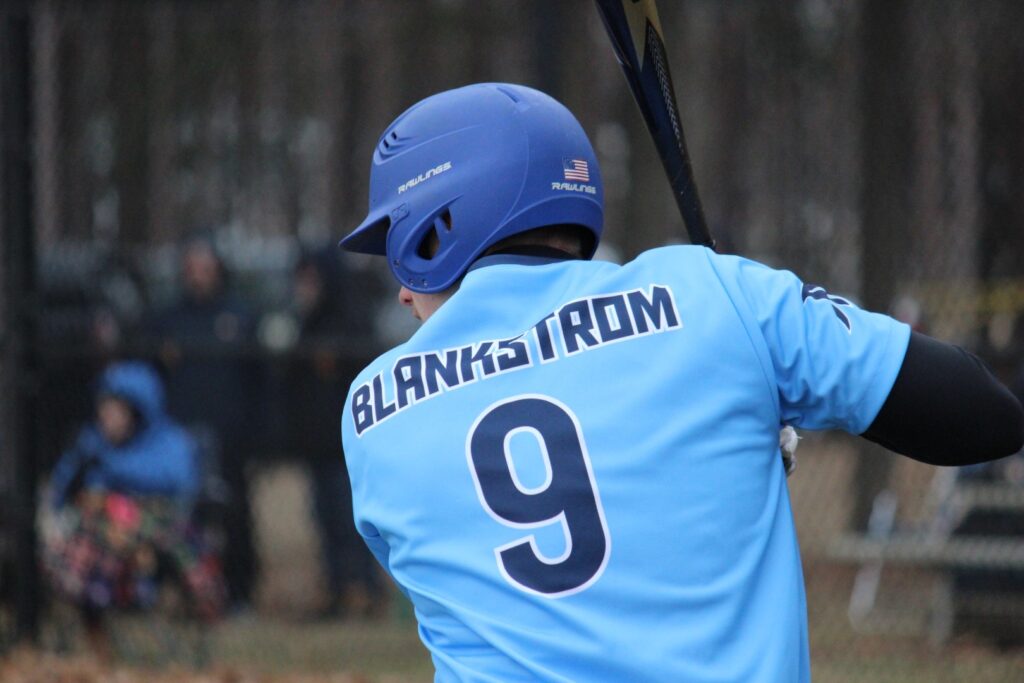 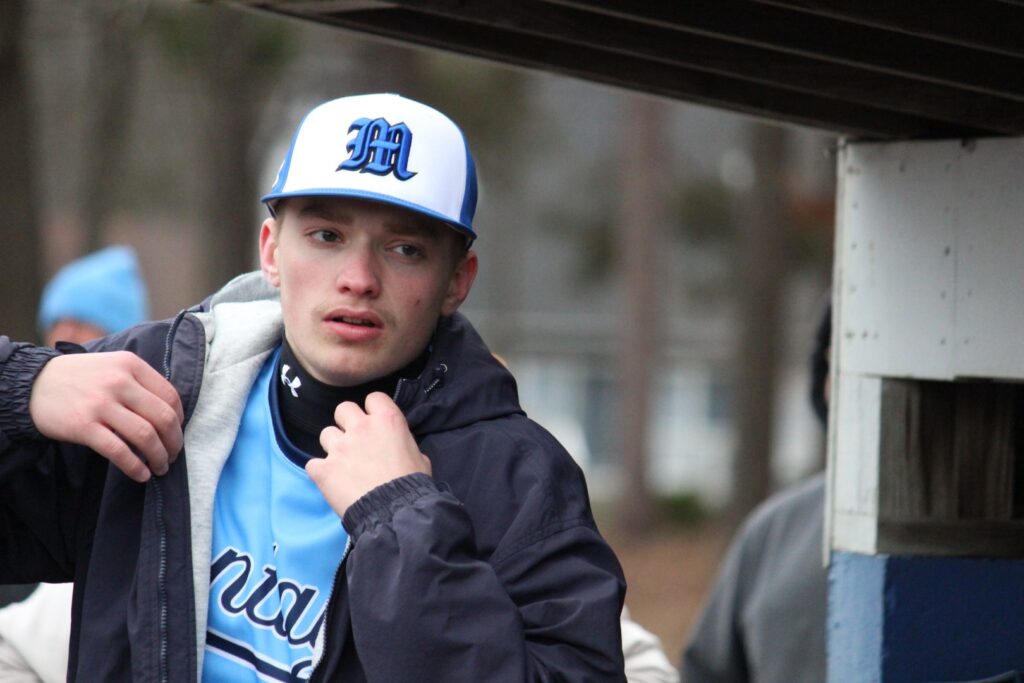 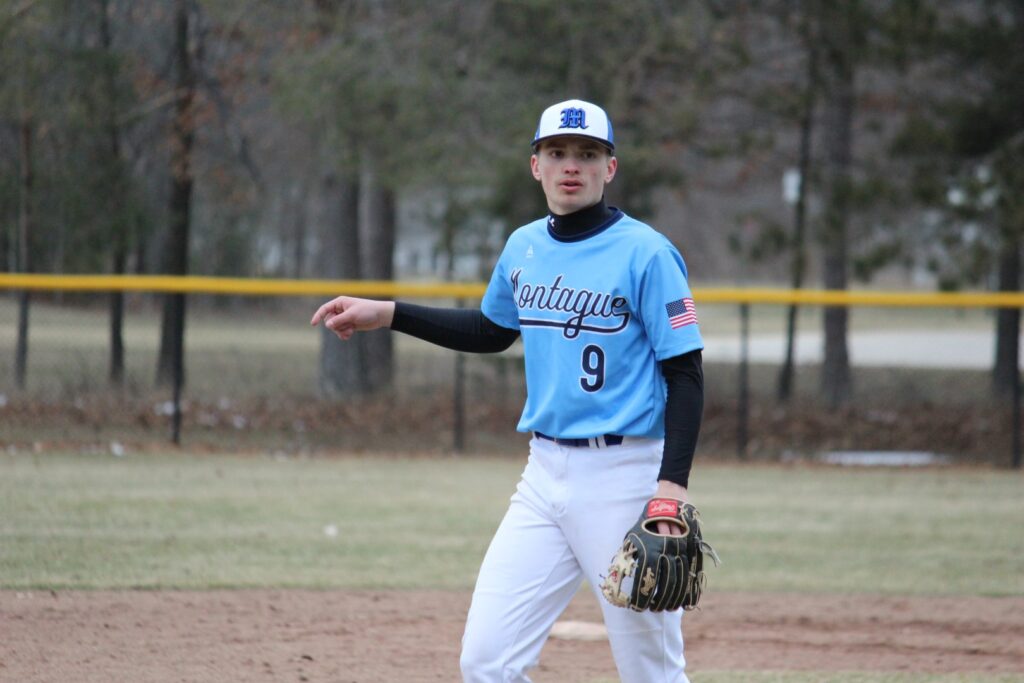 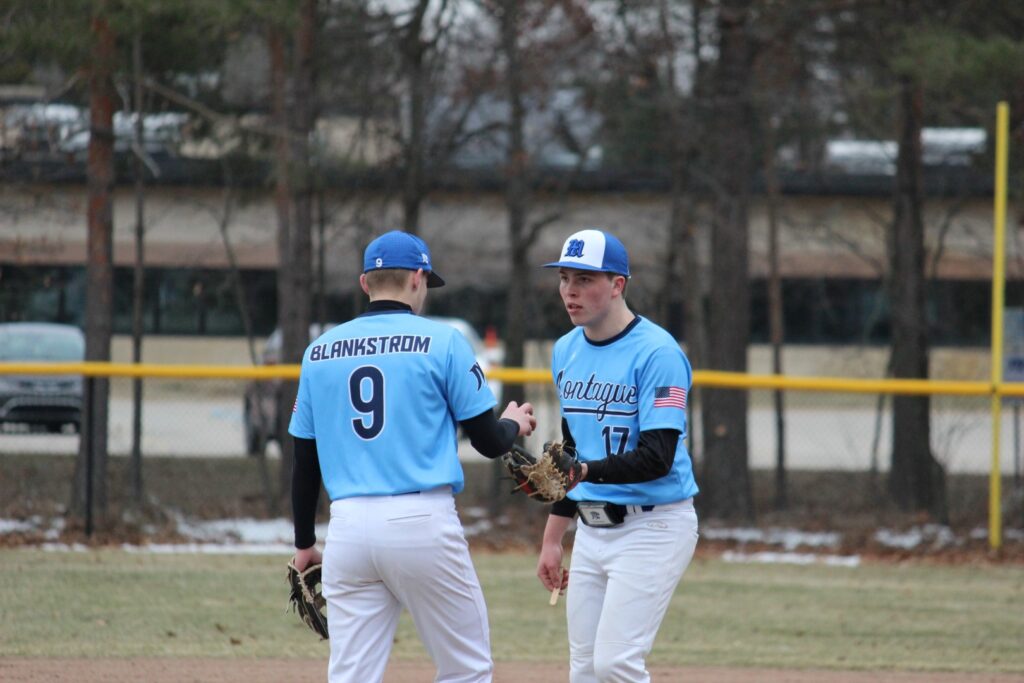 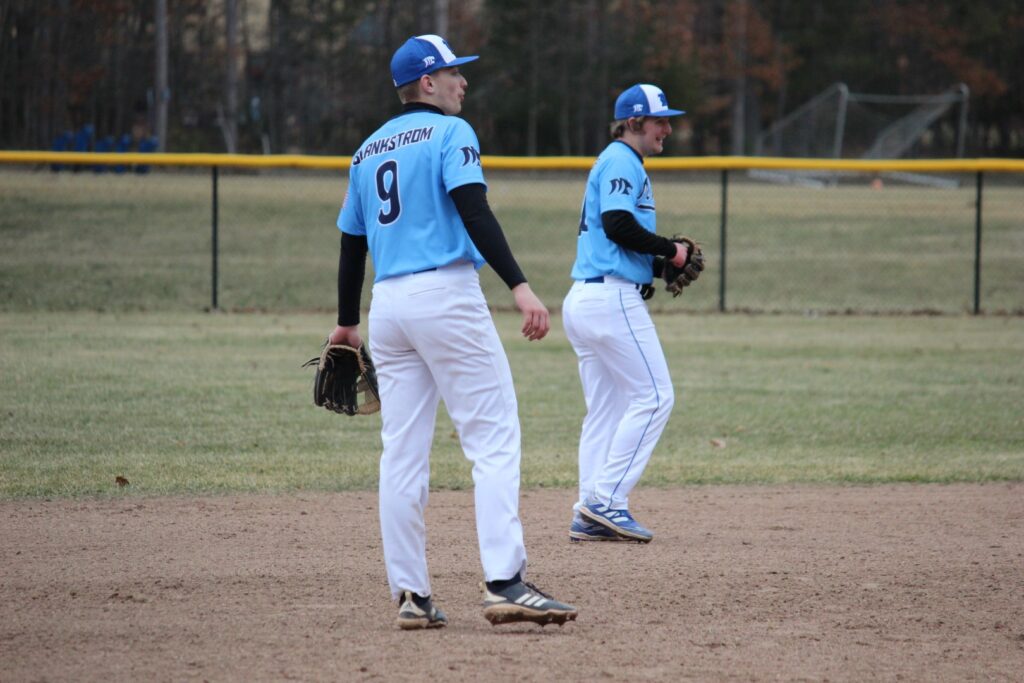 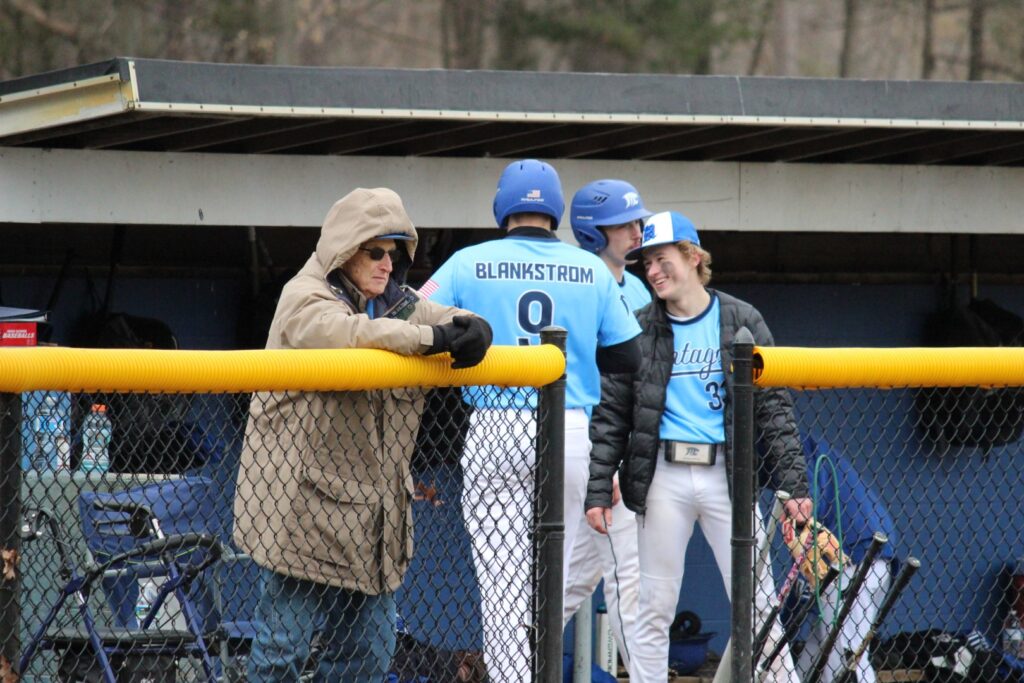 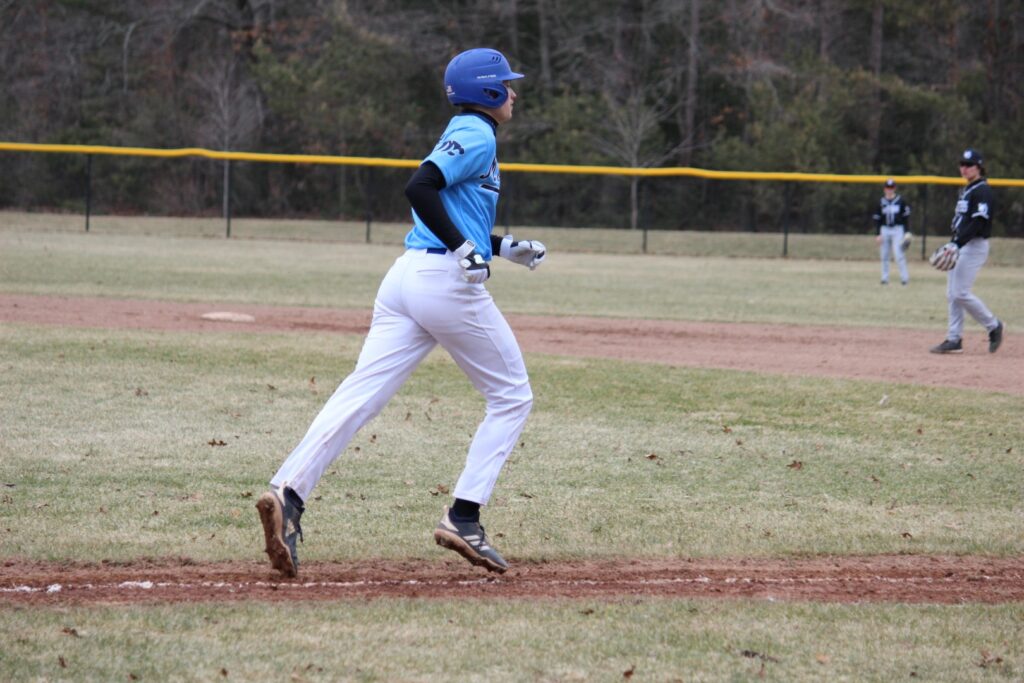 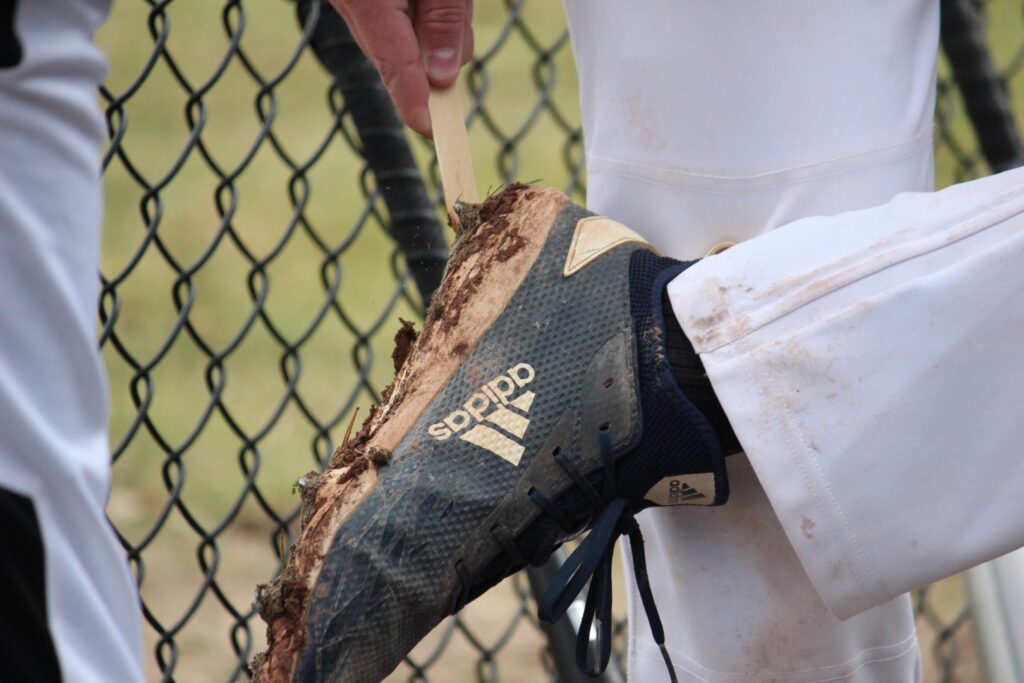 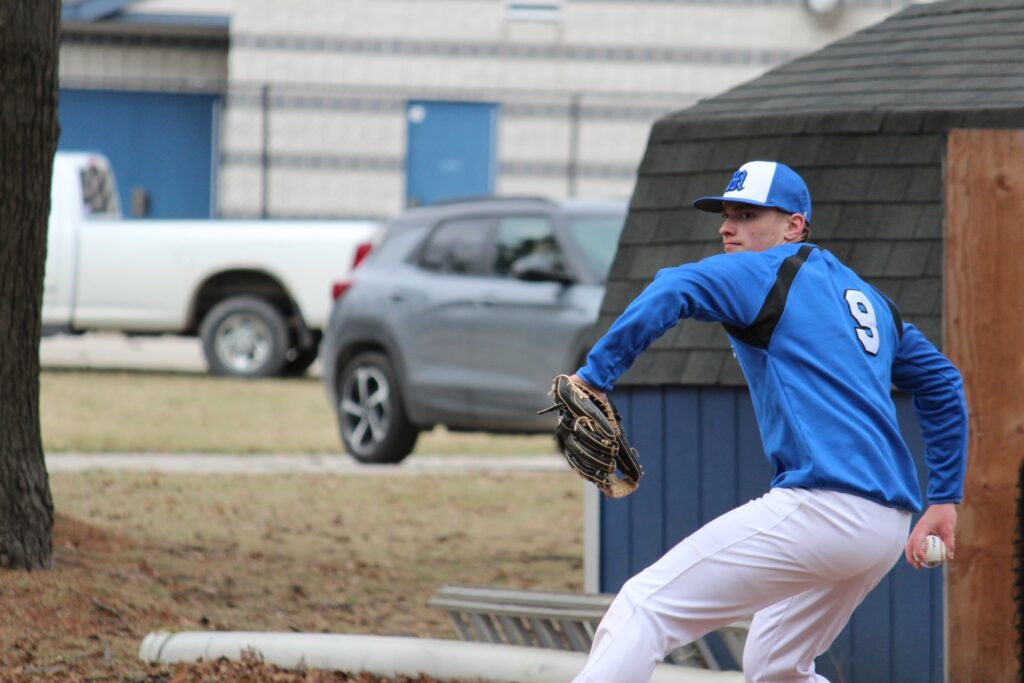 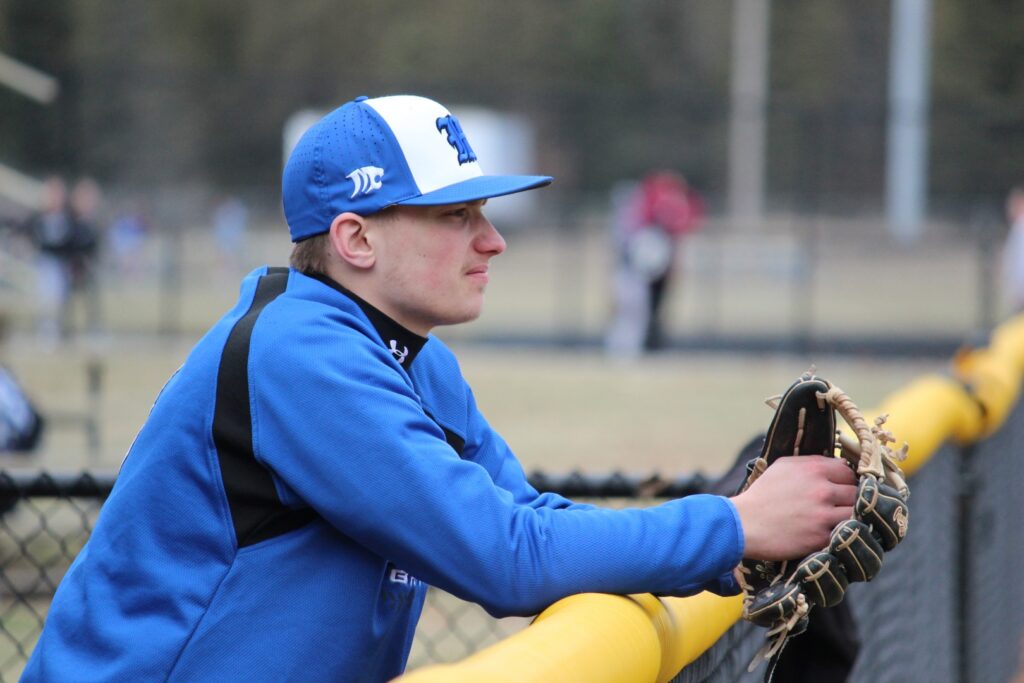 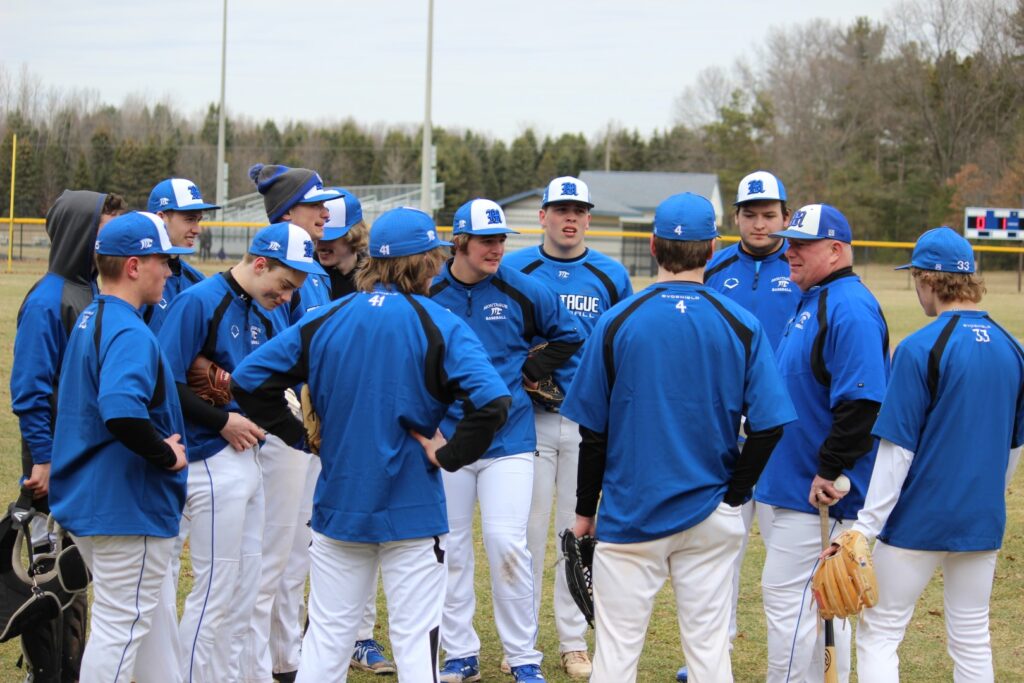 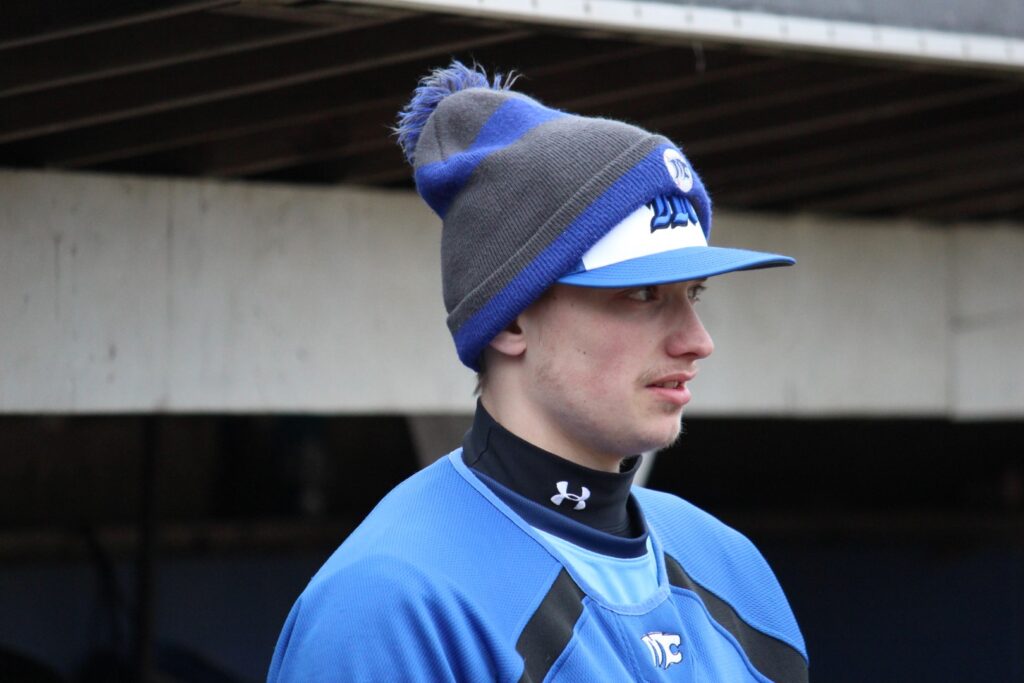 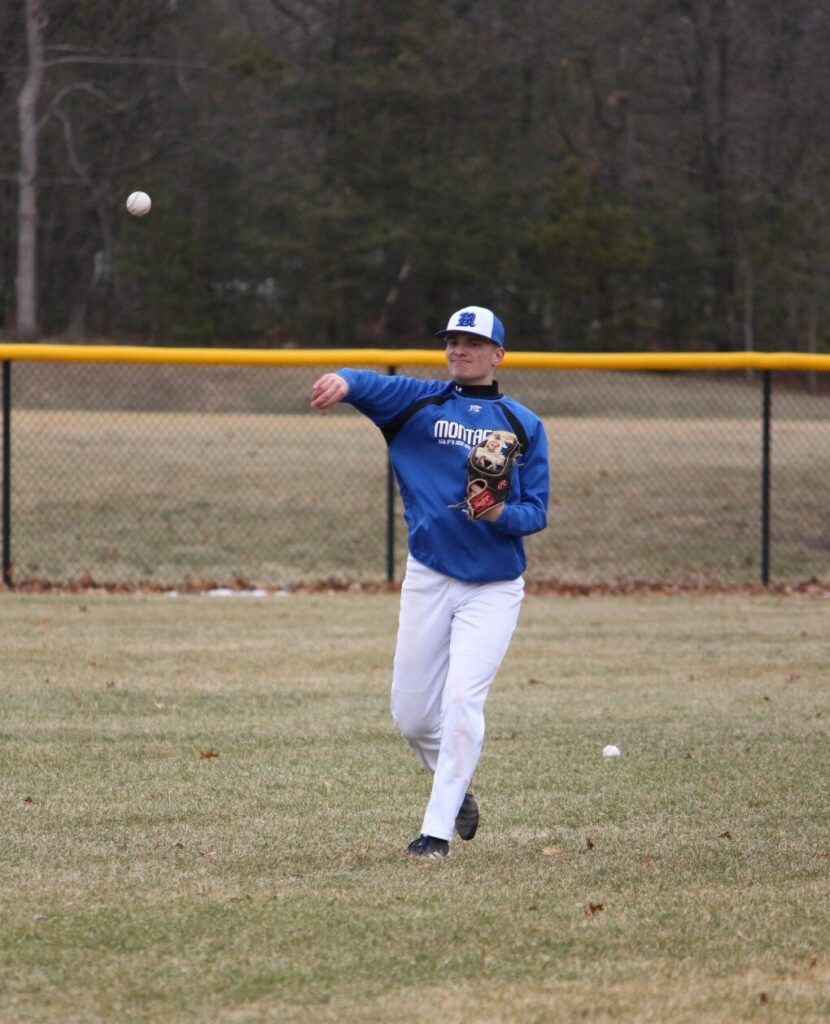 Despite the rough start to this season, nobody is panicking. Montague is still considered a favorite to defend its conference title with North Muskegon being right there, too. And Blankstrom is at or near the top of the list when it comes top players in the conference.

He’s been around baseball enough to know that it’s a game of failure and that one must persevere.

“For me, I know last season that I had probably one of the best seasons I could ever have,” Blankstrom said. “This year, I just have to build on that and just play the best that I can play. If something bad happens, just forget about it – flush it.”

Montague head coach Kevin Buchberger played against Rick Blankstrom when the former was at MCC and the latter at GRCC. They were later teammates at Aquinas.

Buchberger said Colton is a much better hitter than Rick was and that Rick would be the first one to say that. Buchberger added that Rick had a “rocket” arm from his catcher position, however, and “guys wouldn’t even attempt to steal after they saw it one time.” He also had the “mentality of a bulldog” behind the plate.

Rick Blankstrom touched 86 to 87 mph as a closer at GRCC. Colton Blankstrom is routinely in the low-80s and he also features a cutter/slider, curveball and changeup. His father believes he projects as a second baseman and pitcher at the college level.

For Montague’s baseball team, Colton Blankstrom does it all.

“When he’s on the mound, he gives us a chance to win every game,” Buchberger said. “When he’s in the lineup, he gets you the big hits to score runs to be in every game. He’s the ultimate team player and I’m glad we have him on our side.”

Rick and Sara Blankstrom are both employed by Whitehall District Schools – Rick as head of maintenance and facilities, and Sara as an administrative assistant in the high school.

Colton Blankstrom has learned from his brother to compete, but also how to be a good person. The athletic involvement comes from both of his parents’ families, especially his mother’s side. The interest in hunting and the outdoors comes mostly from his dad and paternal grandfather.

Blankstrom, who carries a 3.65 GPA, is more on the quiet side. He said he’s similar to his father in that way, although both become more relaxed once they get to know you.

“(Blankstrom’s parents) always taught me how life is going to be hard and you’re going to have to get back up,” he said. “They also tell me that you always have to be the kind one, even if someone’s being mean. Be kind to everyone.”