An MHSAA Division 3 state champ in discus and runner-up in shot put, Kimes is now All-American in hammer throw. 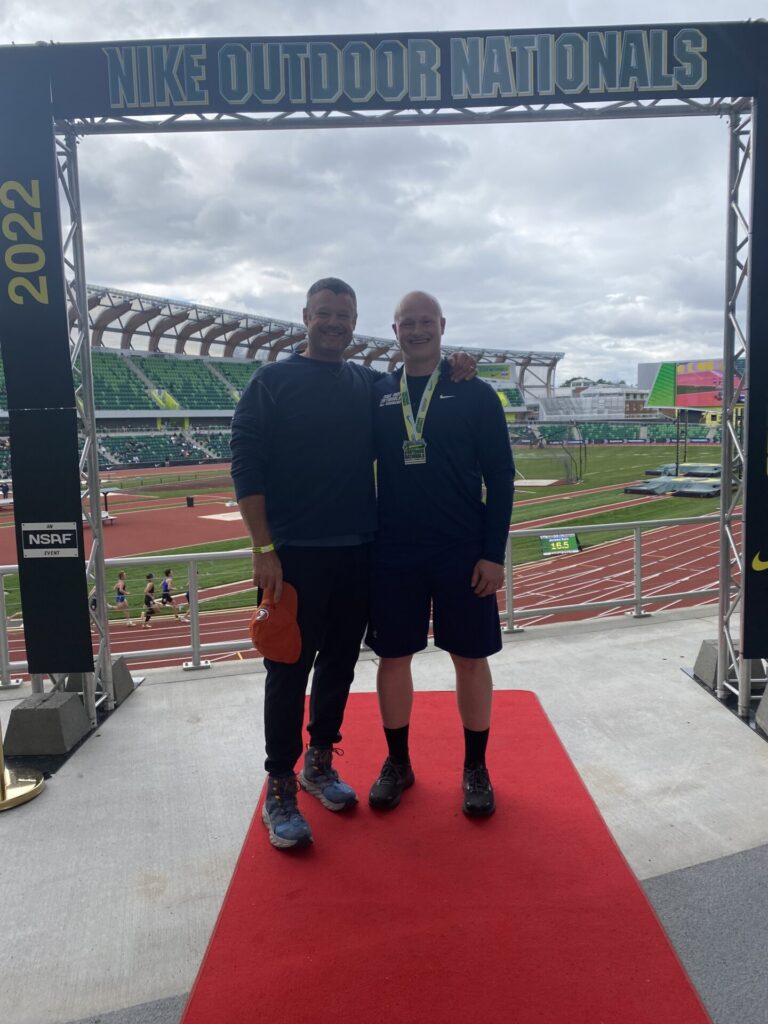 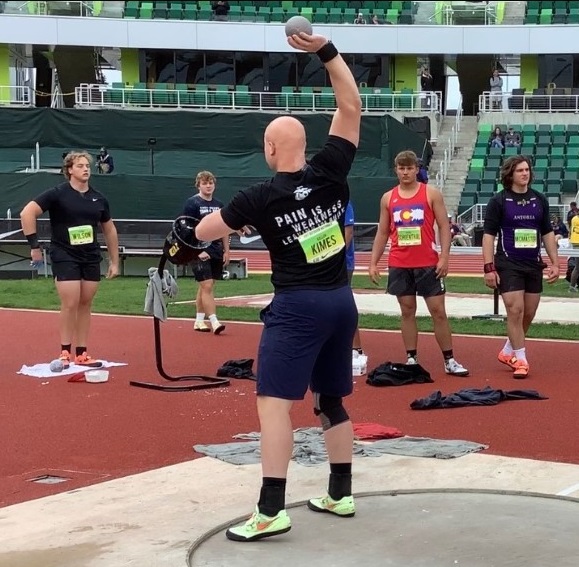 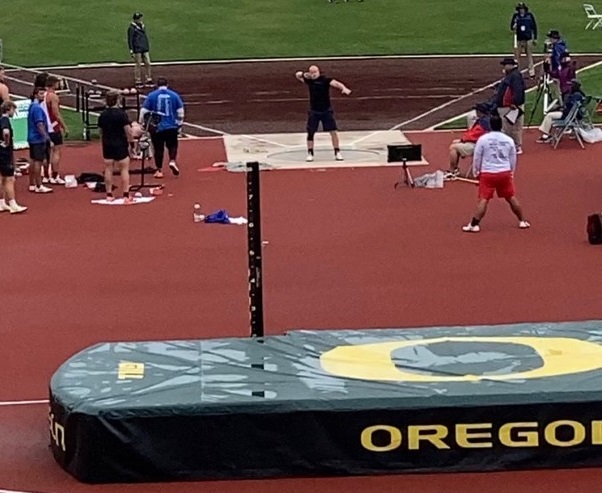 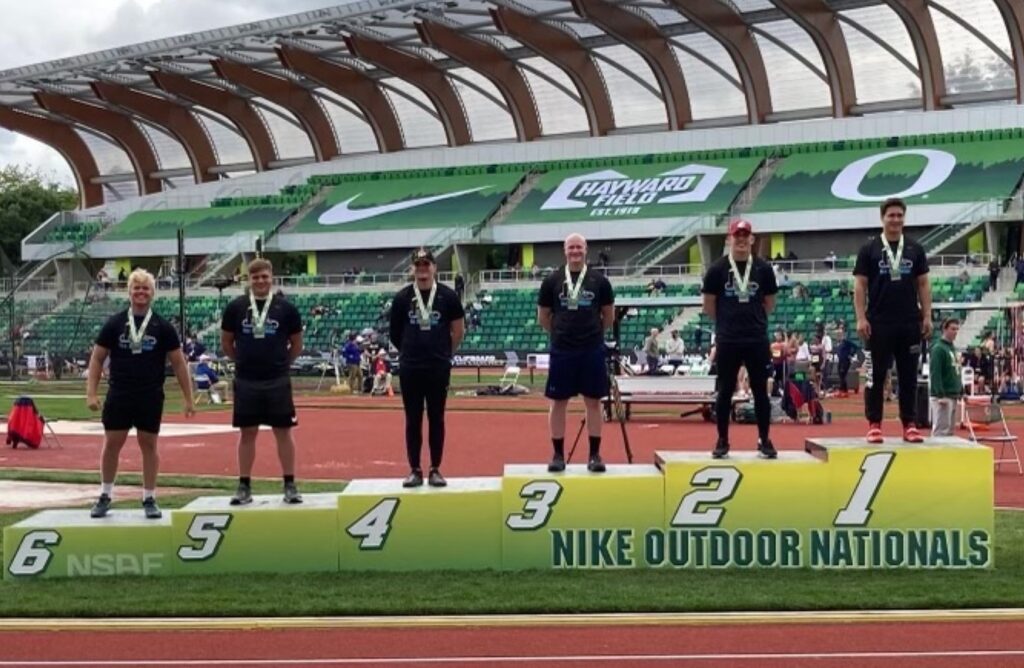 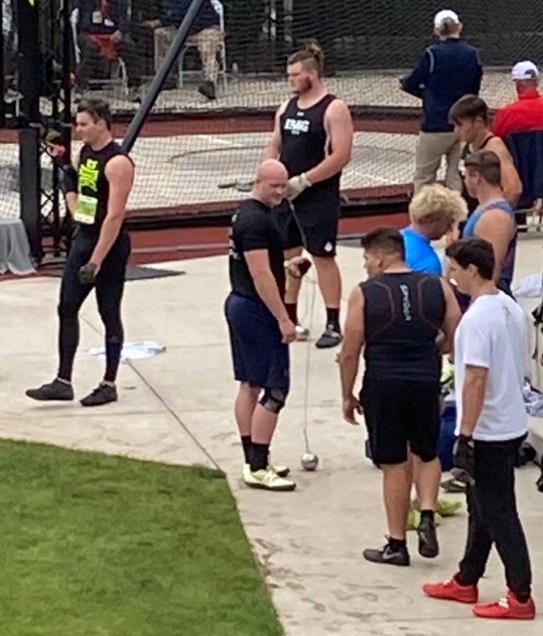 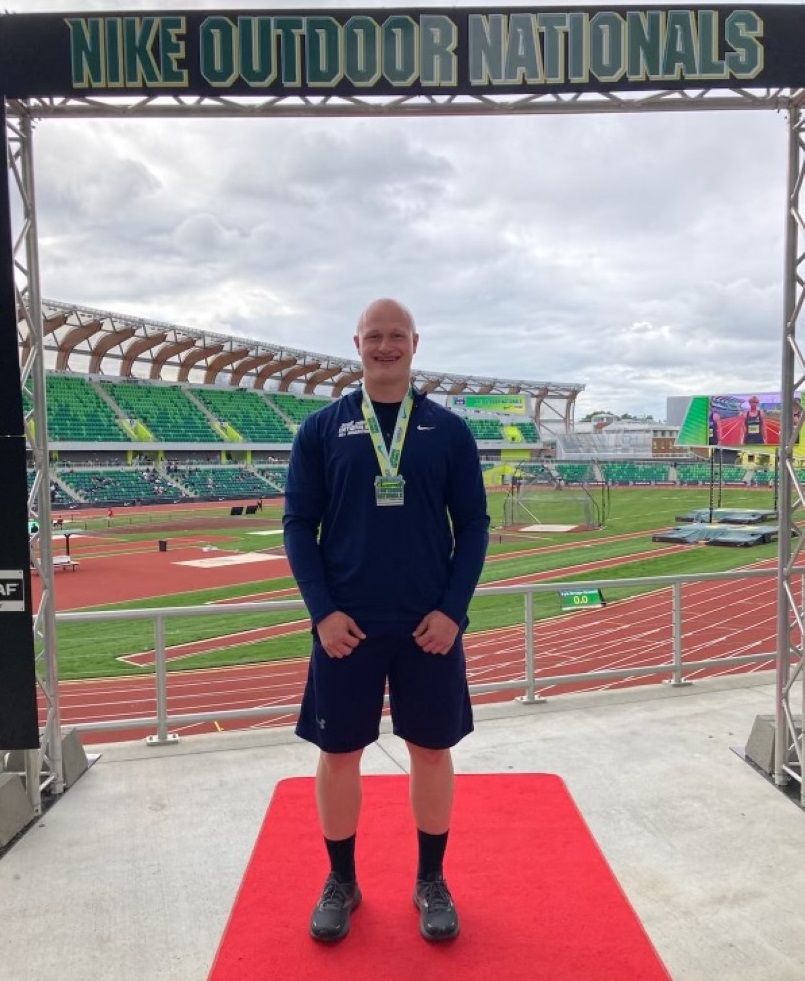 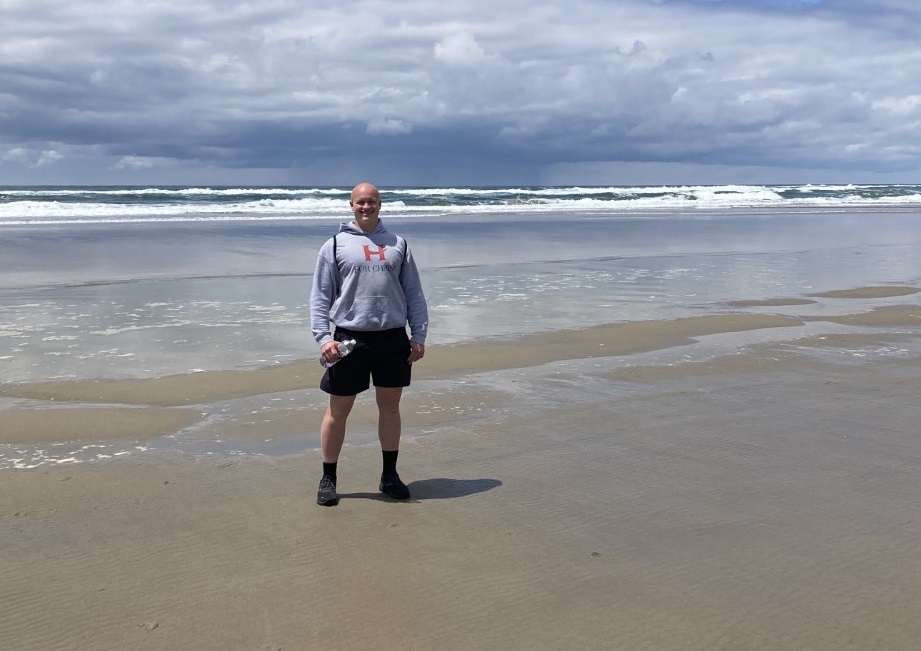 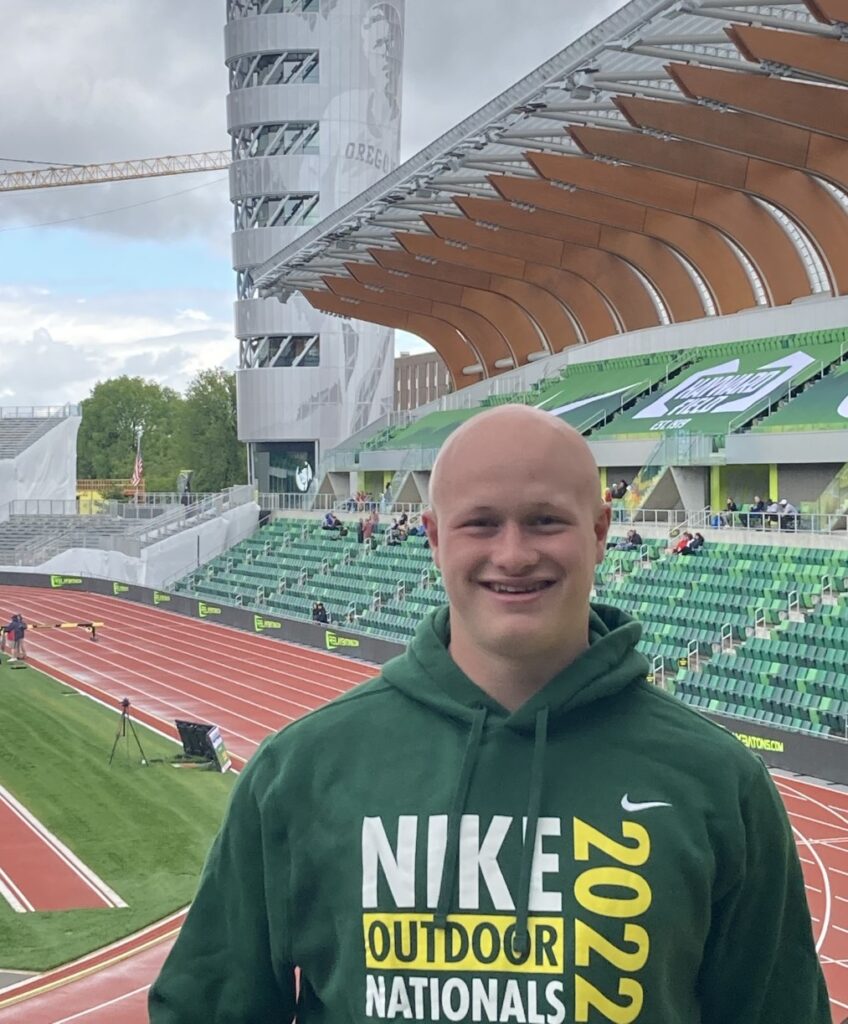 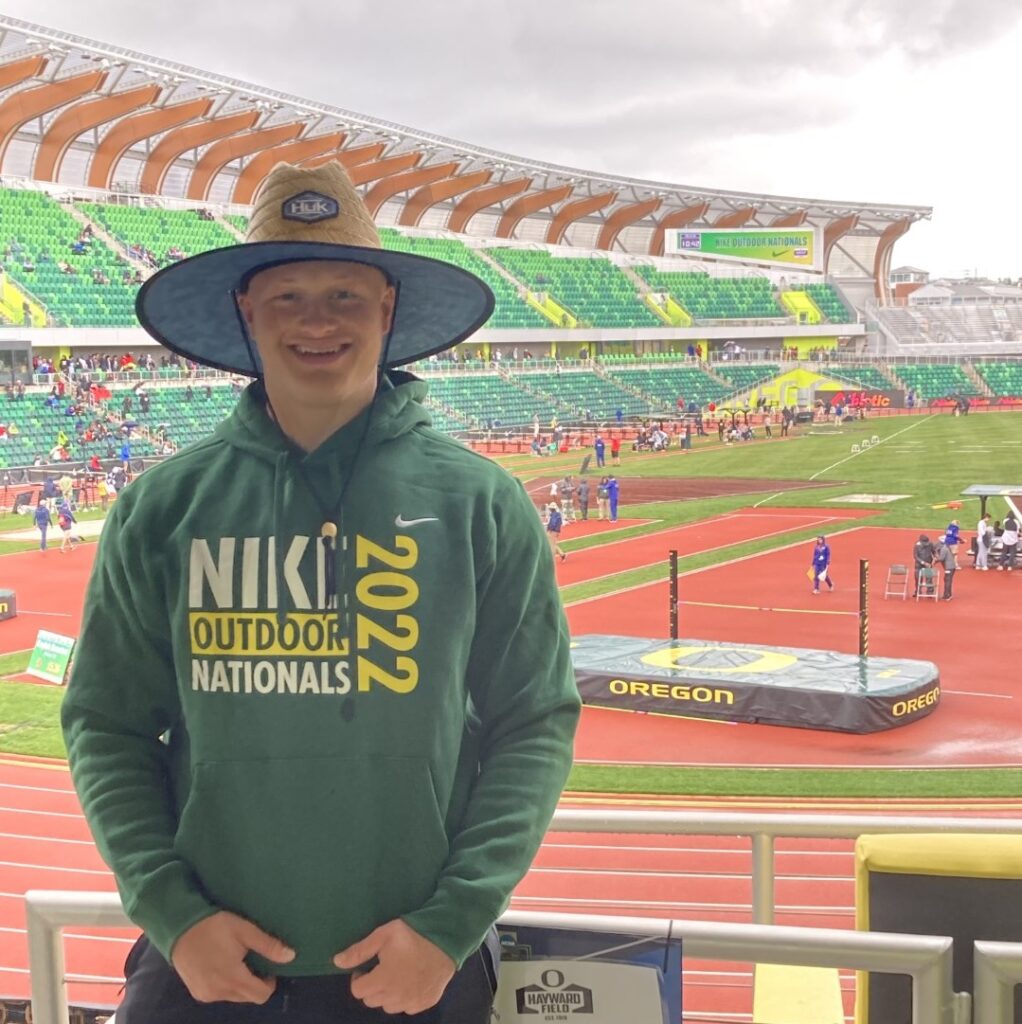 It’s not a watch, shaving kit or socks, but Kellen Kimes’ Father’s Day gift to his dad will do.

Kimes snagged an All-American finish in the hammer throw Sunday at the Nike Outdoor Nationals in Eugene, Ore. The standout from Hart High School tossed the hammer 195 feet, 11 inches at Hayward Field to place third nationally and break a Michigan state record in the event.

“I couldn’t have imagined a better way to spend Father’s Day with my dad,” Kellen Kimes said about Ken Kimes, who also is Hart’s boys track and field coach. “We were sharing an experience that will last a lifetime and track and field is something we are both extremely passionate about.

“It was an experience I will never forget.”

Ken Kimes noted that Kellen’s hammer throw was the 14th-best mark in the nation this year, including all of the states that throw hammer as an event all year in track meets. Michigan is not one of those states.

The 6-foot-plus, 225-pound Kellen Kimes recently completed his junior year at Hart, for which he captured an MHSAA Division 3 state title in discus and runner-up in shot put. He won West Michigan Conference titles in both of those events.

“I mentioned to Kellen, that’s what I wanted for Father’s Day, for him to place in one event that day,” Ken Kimes said. “We thought the best possibility was in the hammer and it happened to work out that way.

“I am a proud father for sure. The kind of sad part is, now we have to wait until December to starting competing again.”

Ken Kimes called the atmosphere at University of Oregon’s famed track and field facility “electric.” He said it’s a state-of-the-art facility and just being there was a great Father’s Day gift.

Kellen Kimes has put in hours upon hours of work to get to this point, so it was exciting for him to perform so well.

“Well, it certainly makes all the long drives to Grand Rapids during season to practice hammer worth it,” he said. “It feels good to be able to show up, on a big meet, my third ever in hammer, and do what I know I was capable of and what I knew I could do according to the long hours of practice I spent working out the technique.

“With that being said, it feels really, really good. However, I already feel the desire for bigger things on the horizon.”

Up next for Kellen Kimes is making sure he gets quality rest so that he can get his body back to 100 percent. He has suffered some wear-and-tear type of injuries that come with a long indoor and outdoor season.

Then, it’ll be time to work back into a rigorous program that he hopes help realize some of those bigger goals.

“That’ll get me stronger than ever, faster across the circle than ever, and more efficient with my energy in my throw,” he said. “And all while I’m doing this, I’m going to focus on my weaknesses from my junior year so they become my strengths for senior year.”