Voting will begin later next week for Player of the Year in each sport in the league. 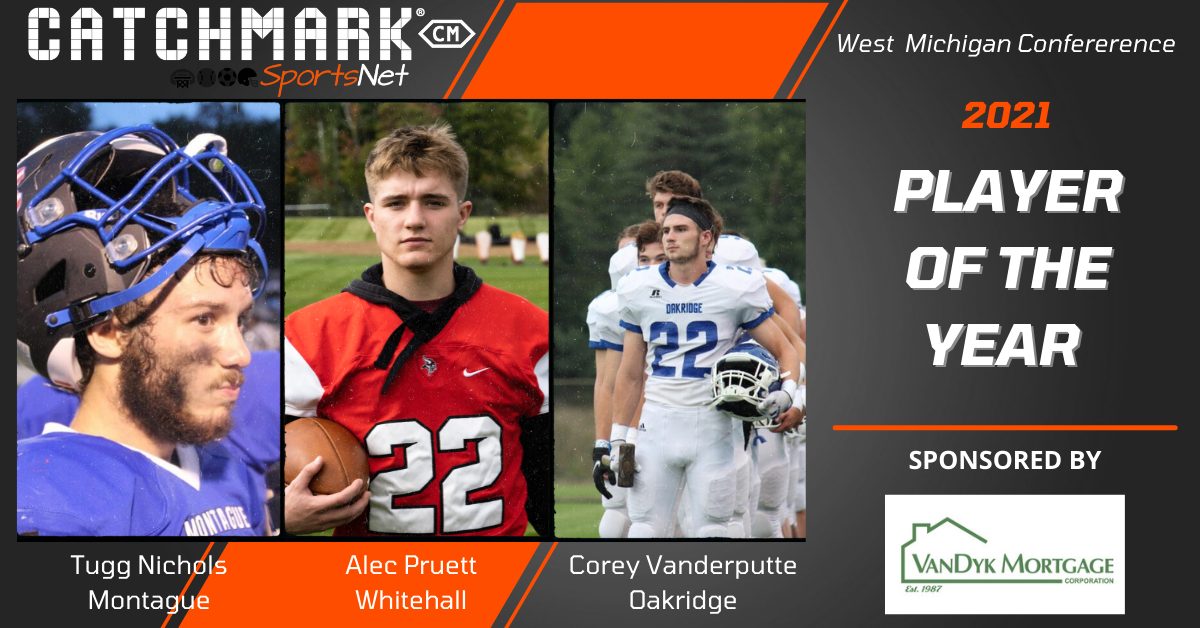 Montague’s Tugg Nichols, Whitehall’s Alec Pruett and Oakridge’s Corey Vanderputte have provided big lifts for their respective football teams throughout the 2021 season. Their teams shared the conference title, too, in a very competitive race this fall.

As a result, Nichols, Pruett and Vanderputte have been nominated by a CatchMark SportsNet panel as finalists for the 2021 VanDyk Mortgage West Michigan Conference Player of the Year for football.

Voting for the conference player of the year in all fall sports will open near the end of next week, after we’ve had a chance to announce the nominees in each sport.

Fan polls of all sports will be released in one story on our site. That’s where readers will determine who earns player of the year recognition. Readers will be allowed to vote once per hour as long as the poll remains open.

Once players of the year are determined by fan votes and announced by CatchMark, we will invite the winners to our office in downtown Whitehall for an awards presentation and honorary dinner. A trophy that stays in our CatchMark office will have the names of the players of the year engraved on it.

Here are the three nominees for the conference player of the year award in football, along with their season stats and achievements. They are listed alphabetically:

When it comes to picking the top player for the Wildcats, that’s a tough one. Immediately, three players jump to the forefront: Nichols, Dylan Everett and Hayden McDonald. All three are seniors, who do so much for their team.

Ultimately, Nichols was the pick because not only is he a playmaker and a gamer, he’s the emotional leader of the team. The 5-foot-9, 175-pound receiver, defensive back and return man is versatile and he seems to rise to the occasion in big moments.

In nine games listed for him, entering the regional finals, Nichols has racked up team-high stats in all three receiving categories: Catches (36), yards (430) and touchdowns (5). Defensively, he has 24 solo tackles and nine assists to go with one interception. On special teams, Nichols leads the Wildcats with 10 punt returns for 113 total yards.

Reigning Division 6 state champion Montague finished 8-4 on the season after a 31-13 loss to No. 1 Lansing Catholic in the regional.

You’d be hard-pressed to find a more consistent player this season than Pruett, who was the Vikings’ bell-cow running back in their 8-3 season.

The consistency part of things relates to the string of 100-yard games he delivered this season. Pruett rushed for 100 or more yards in Whitehall’s first 10 games, including a career-high 308 yards on 18 carries (17.1 average) with two TDs in the Vikings’ 49-0 victory over Ludington. The only game in which Pruett did not reach 100 yards was in the Vikings’ 24-14 loss at Cadillac in the Division 4 district finals, when he finished with 62 yards on 18 carries with one TD.

Pruett, who also is an all-state wrestler, runs with a low center of gravity on the football field. He was the Vikings’ No. 1 option in the backfield last season as well.

The 5-foot-10, 175-pound running back is following up a first-team all-state season in 2020 with a big senior campaign. He is a big-play threat as a runner and pass-catcher. All in all, he’s what you call a pure football player. Teammate Ethan Jozsa, the big Eagles two-way lineman, is in the same category.

Vanderputte has been impressive on the defensive side of the ball, too. The linebacker/safety hybrid ranks second on the team in total tackles with 48, 38 of those being solos. He has three interceptions, which he’s returned 118 yards, including one for a TD. He has one fumble recovery that he returned 14 yards.

If that were not enough, in his one punt return this season, Vanderputte took it 18 yards for a score.

MEET THE PLAYER OF THE YEAR NOMINEES IN OTHER FALL SPORTS: