Emma Pendell made history March 5 at Ford Field when she became the first Montague girls wrestler to capture a state championship and first Wildcats grappler since 1989 to seize the title.

It was indeed a goal and notable achievement, but wrestling is just one facet of the multi-talented 16-year-old sophomore.

Pendell has many goals and she never stops working to attain them.

“I’d say she is competitive with everything — so much that while at state, in the hotel she was working on playing her band instrument,” Montague wrestling coach Kris Maddox said.

The daughter of Andrea and Joel Pendell is a 4.11 student. She plays clarinet in band and has won awards. She’s involved in FFA. She competes with Montague’s track team, having participated in mid-stance running events, relays, shot put and pole vault.

Last year, Pendell dual-sported during the winter with wrestling and basketball. She considered doing both sports this winter as well but decided it would be better for her to focus on wrestling. 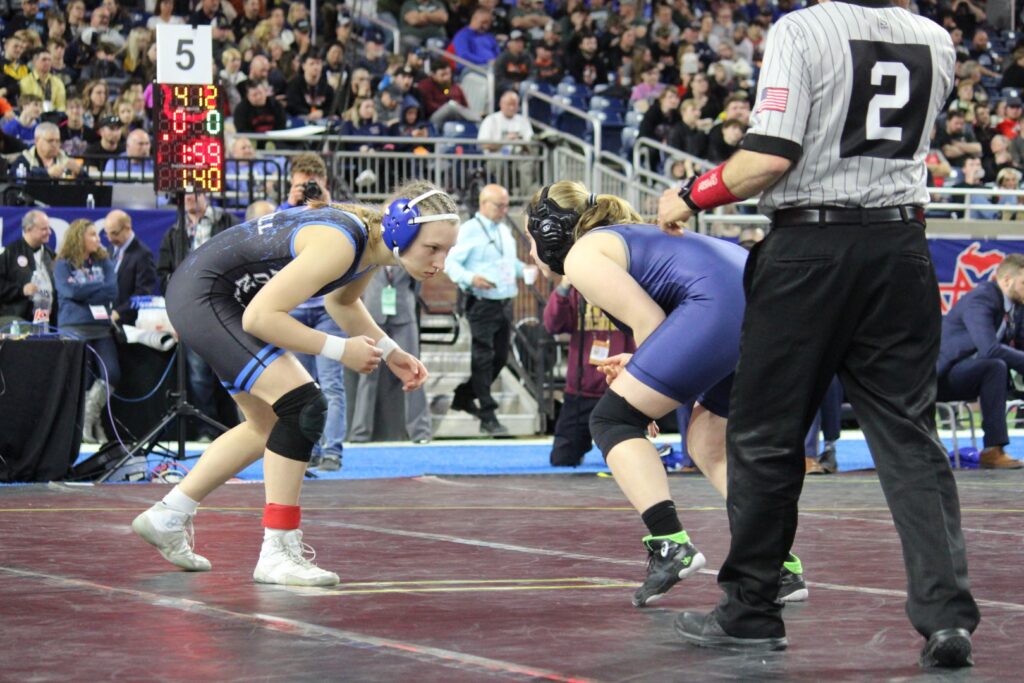 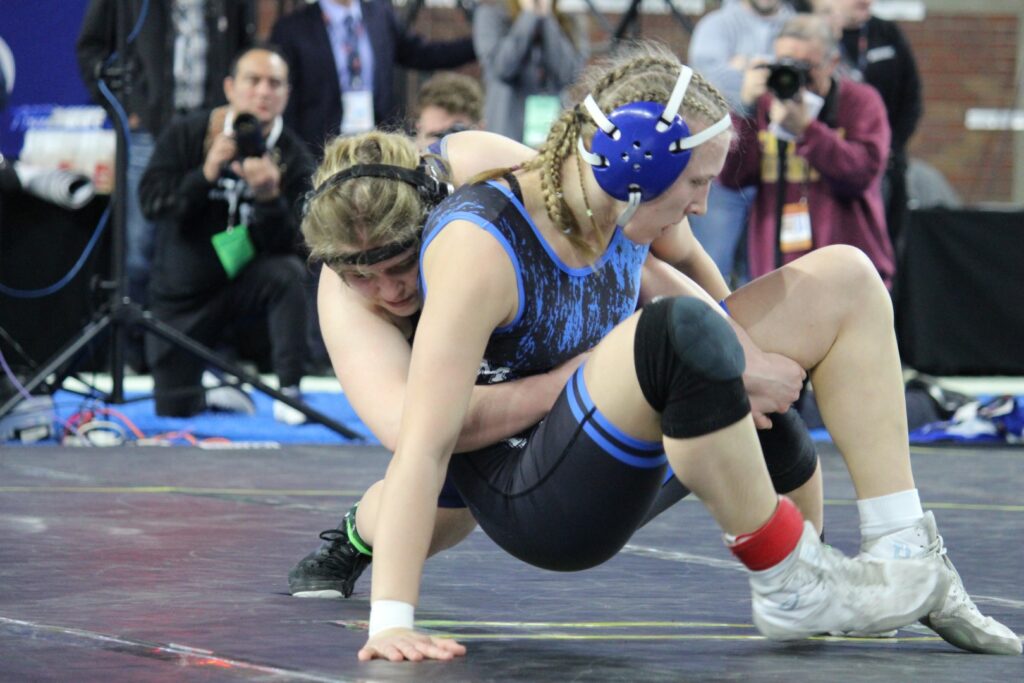 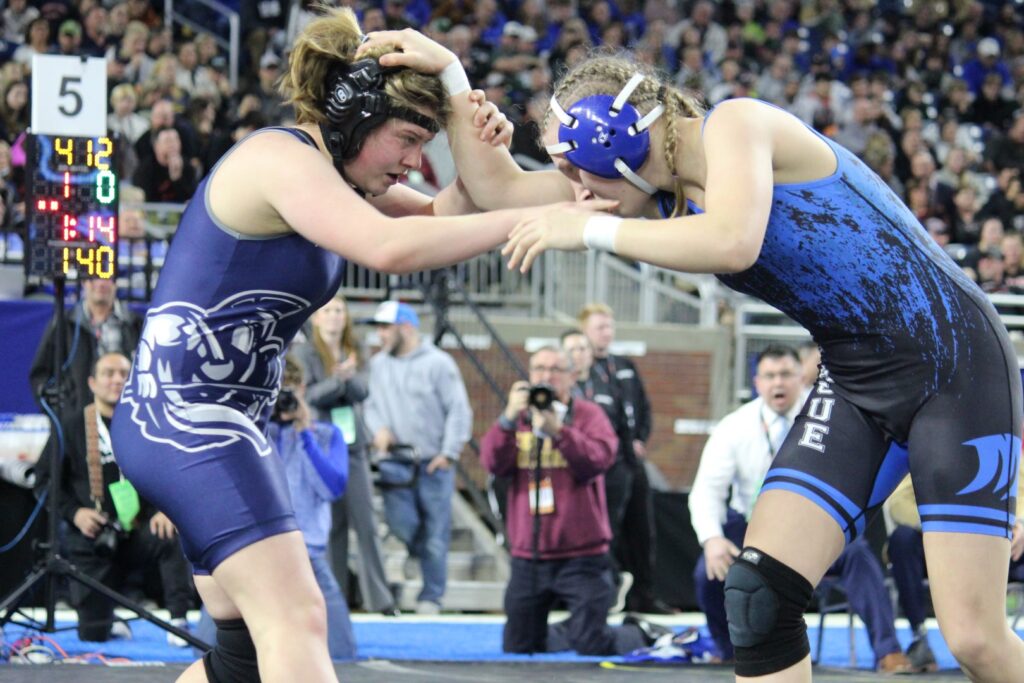 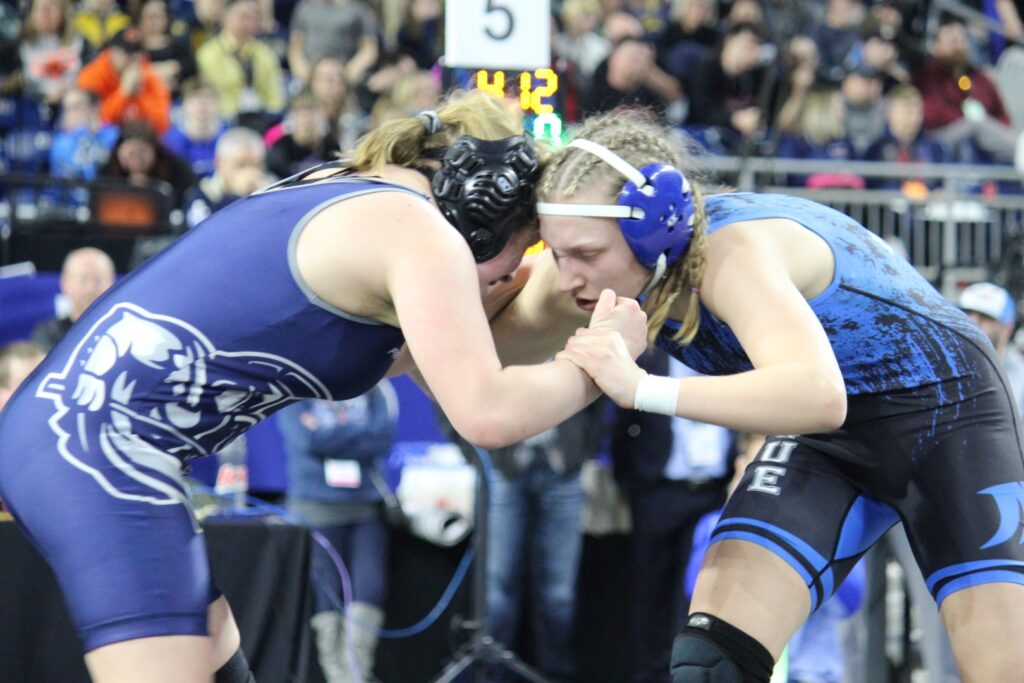 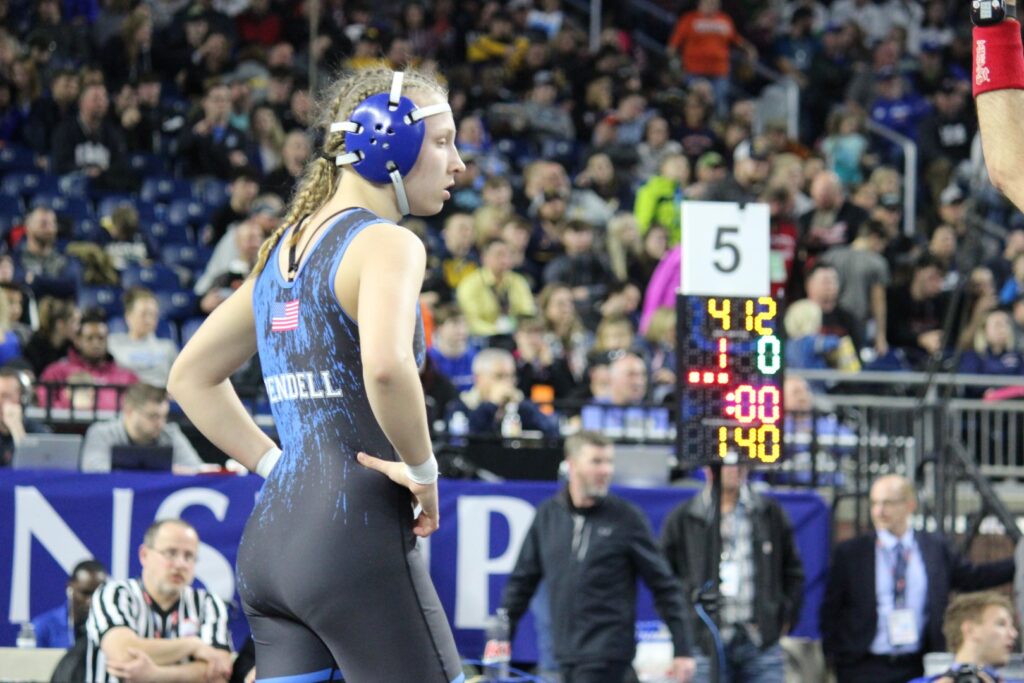 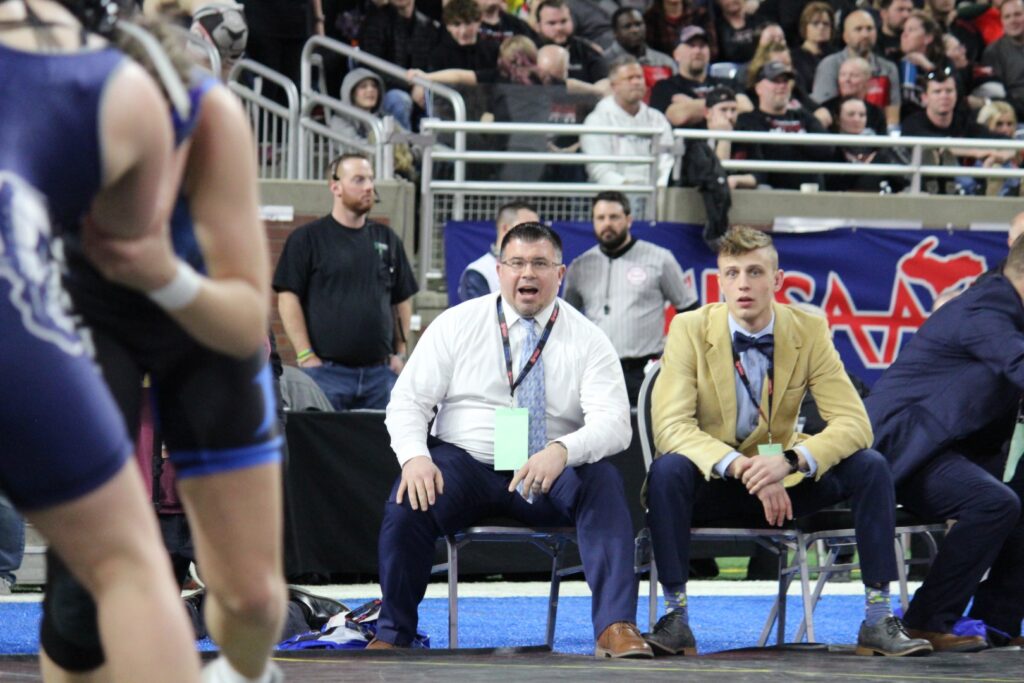 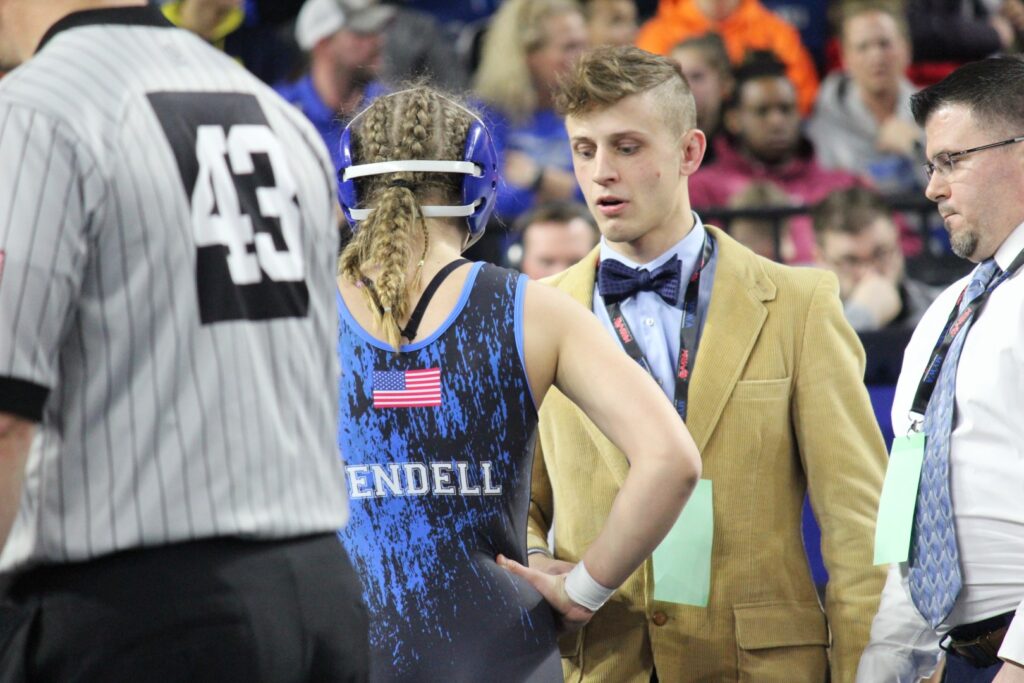 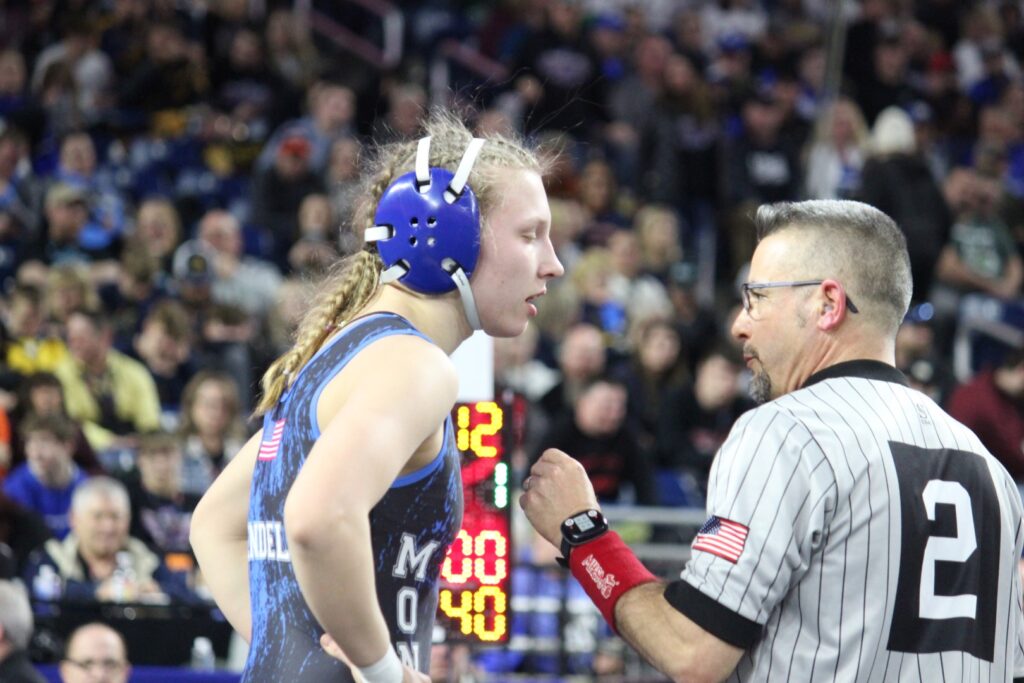 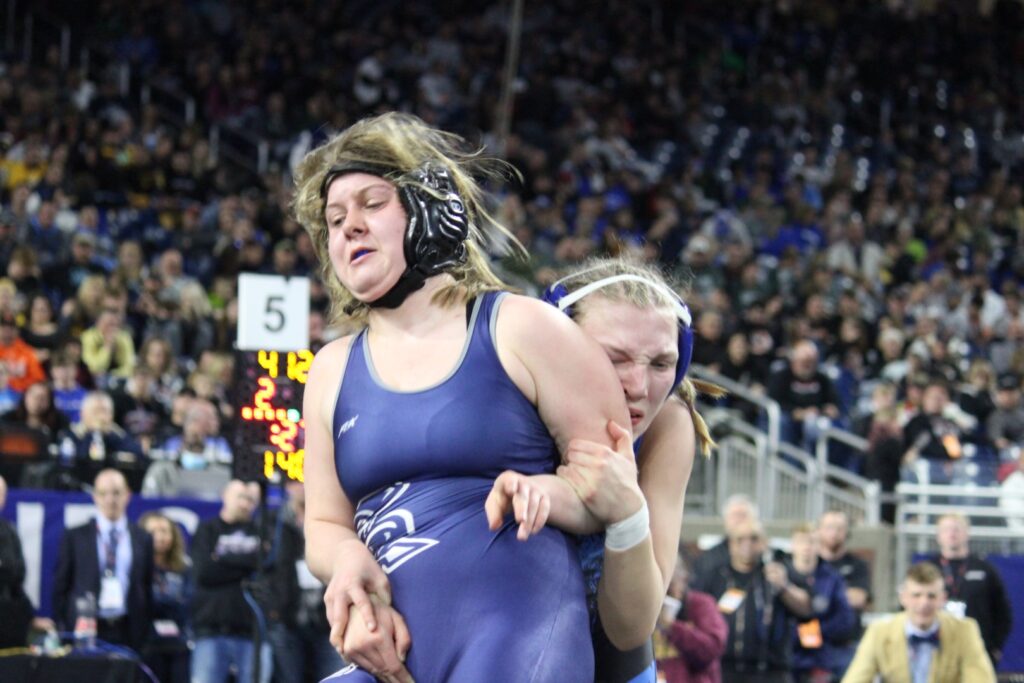 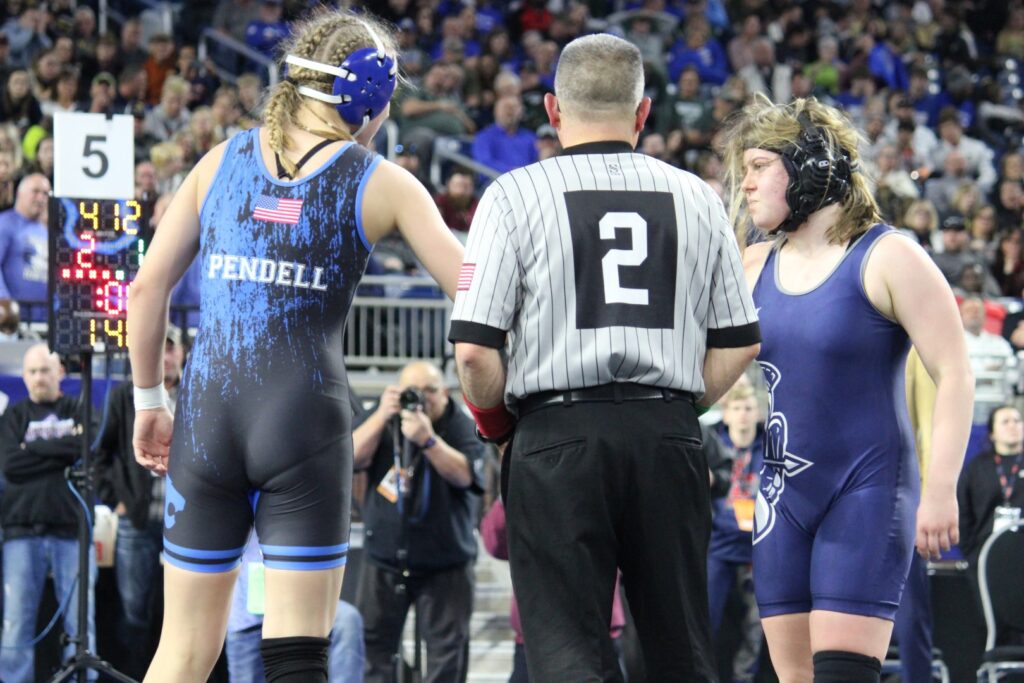 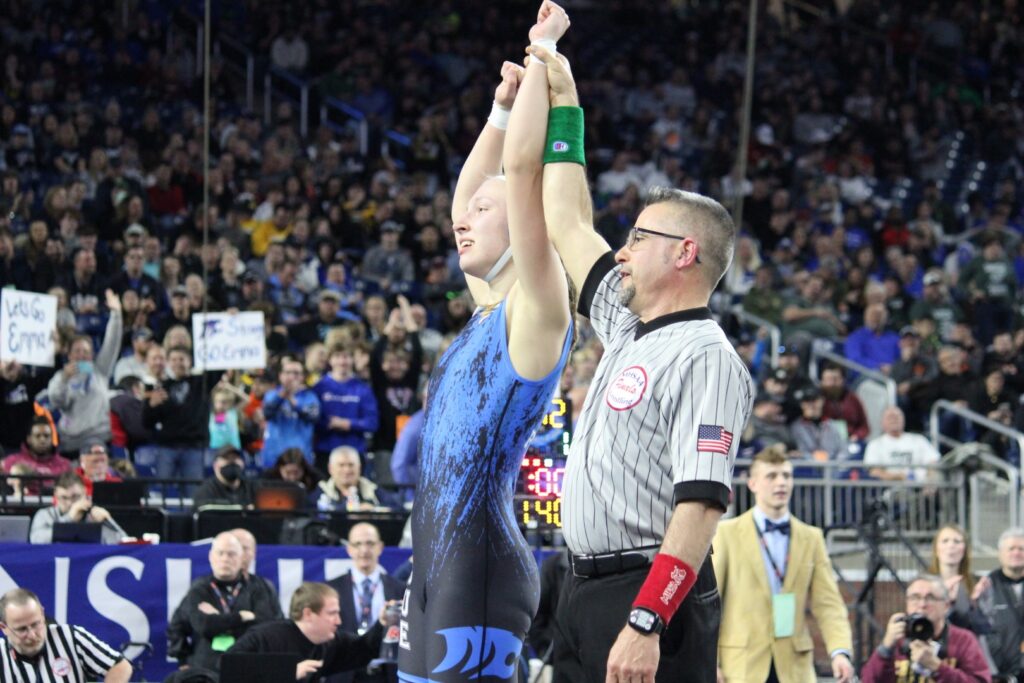 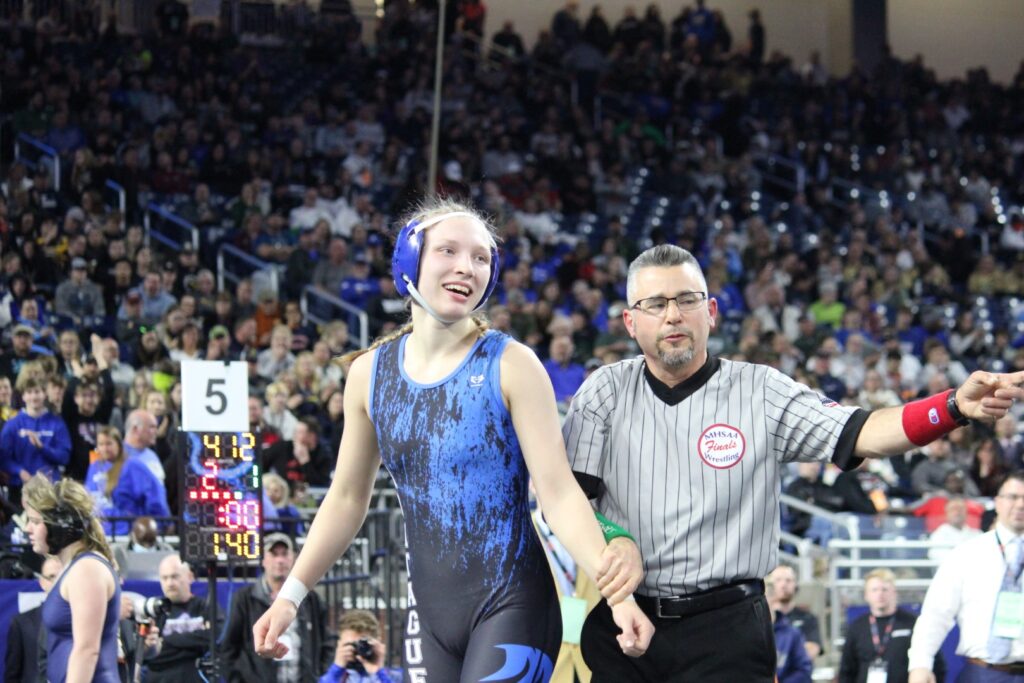 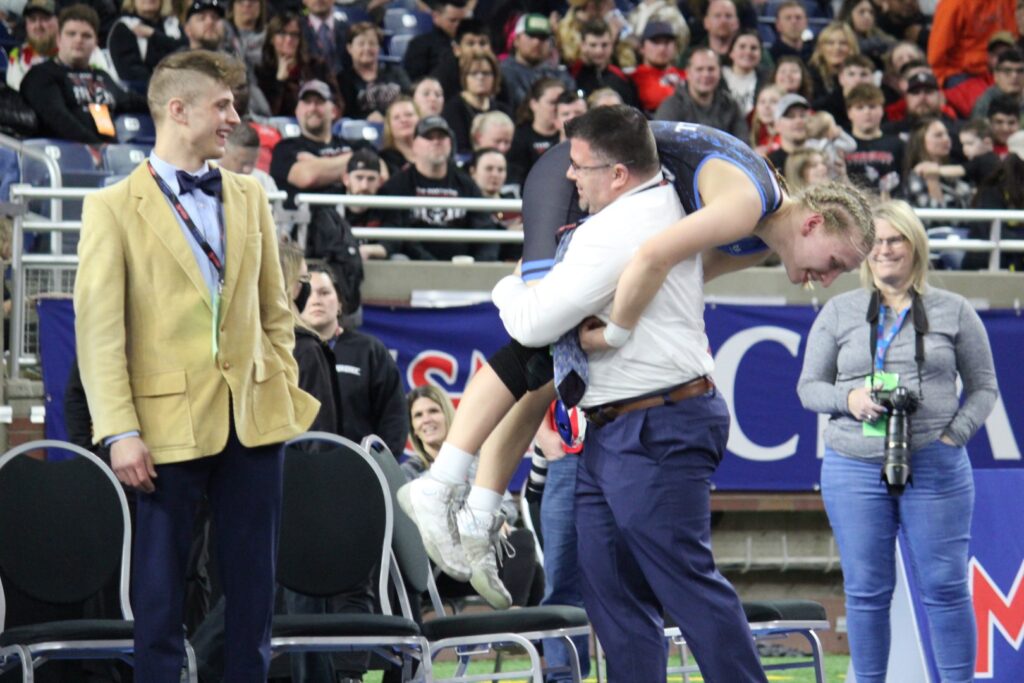 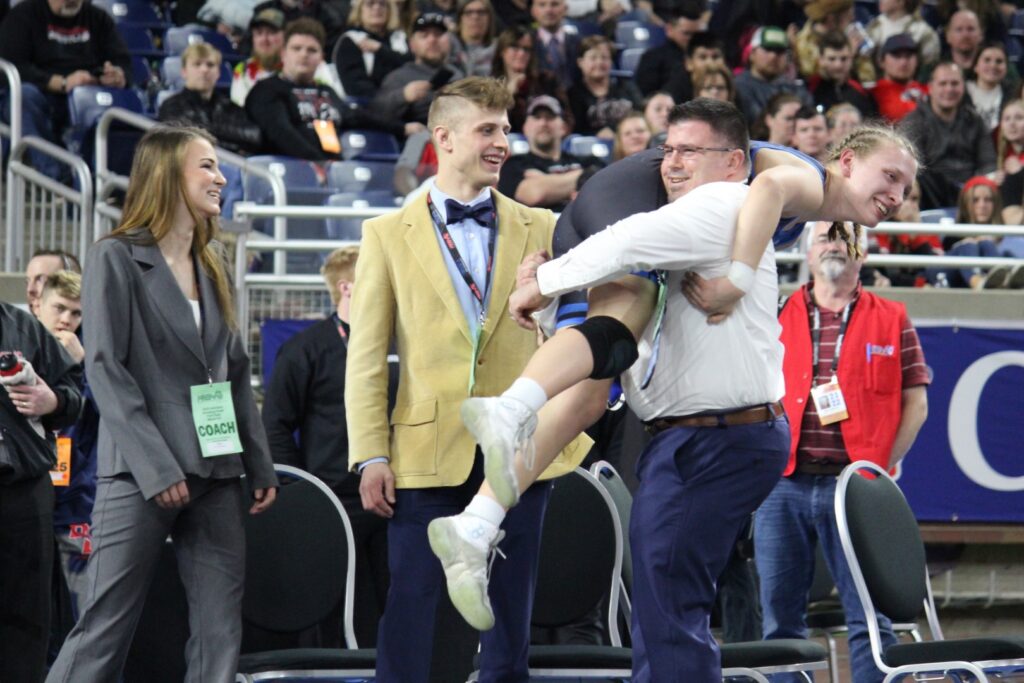 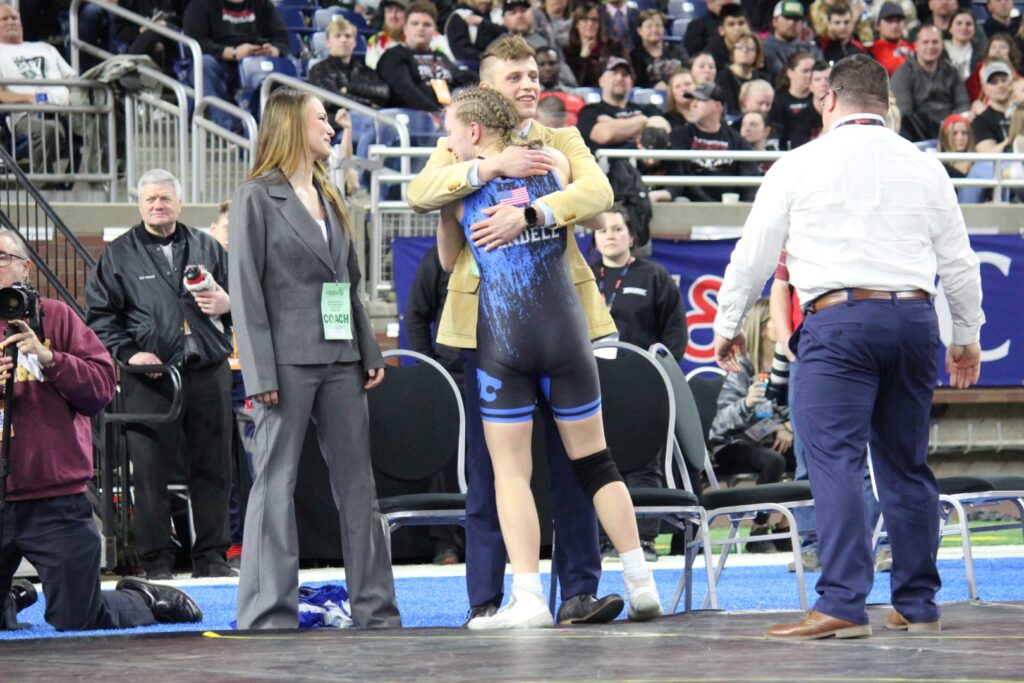 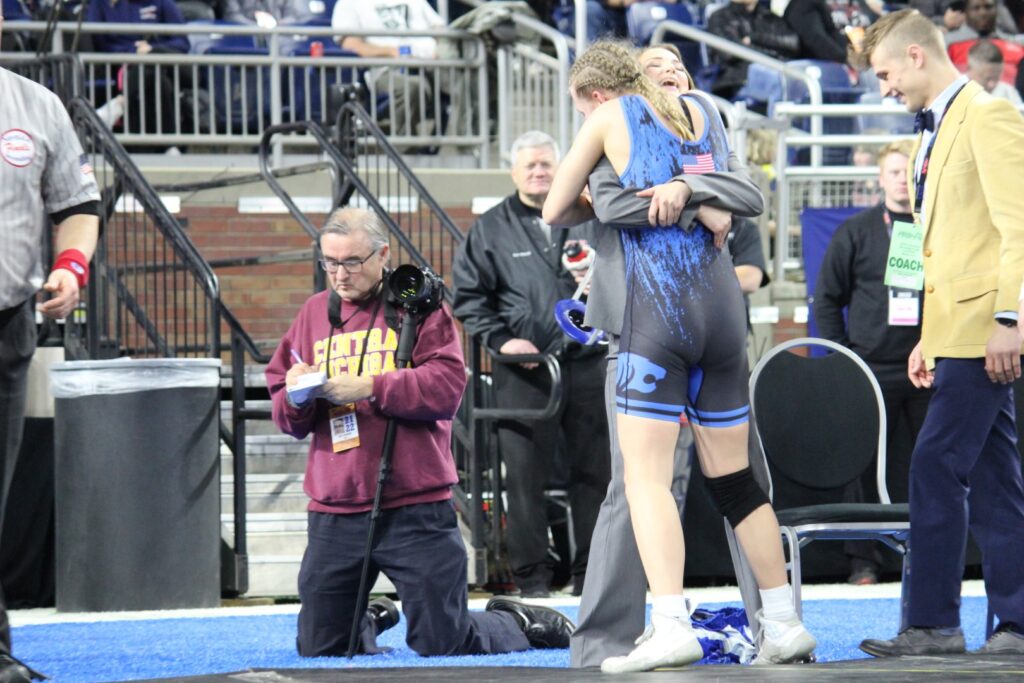 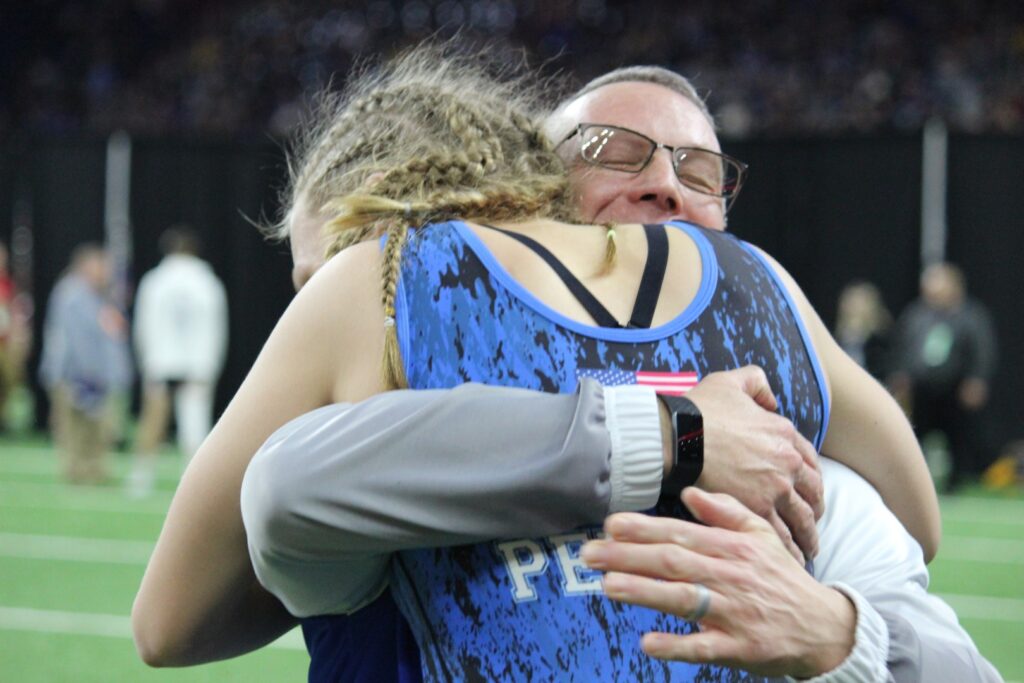 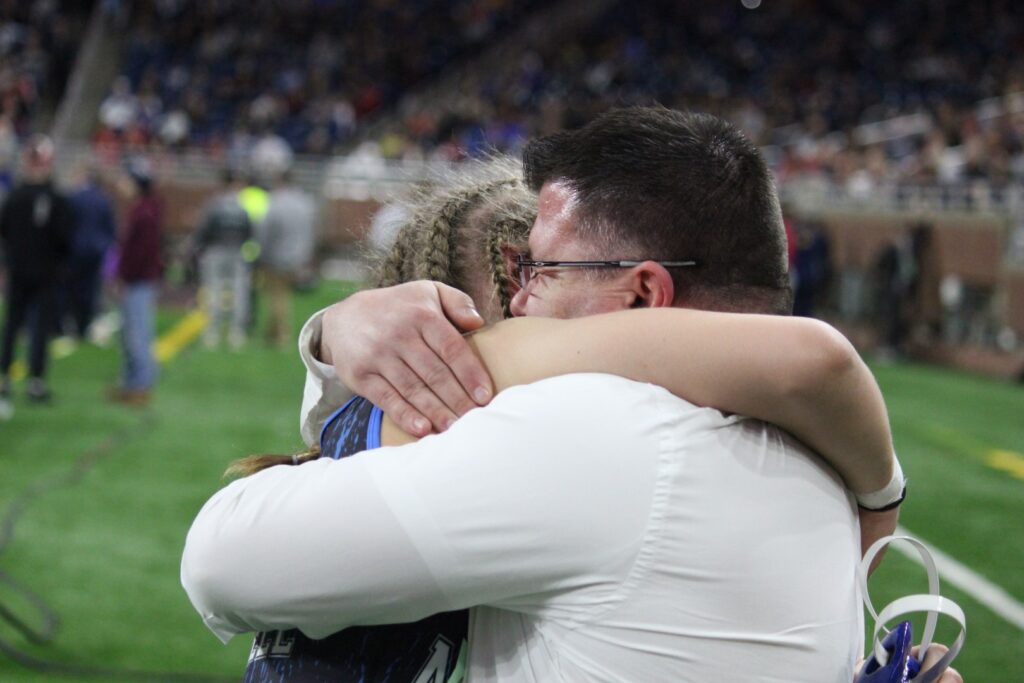 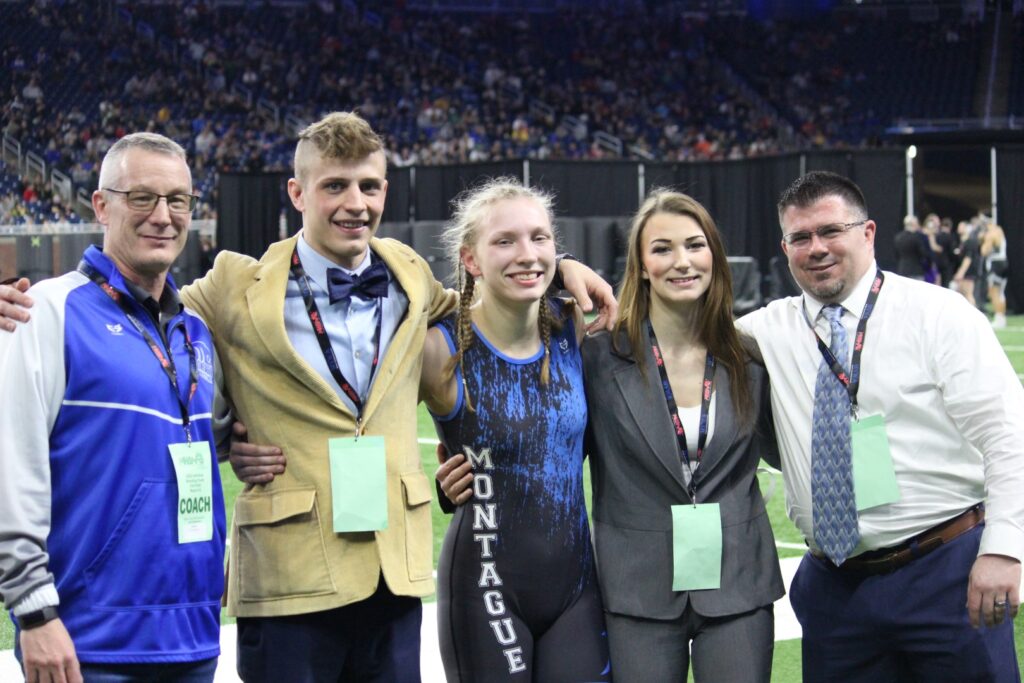 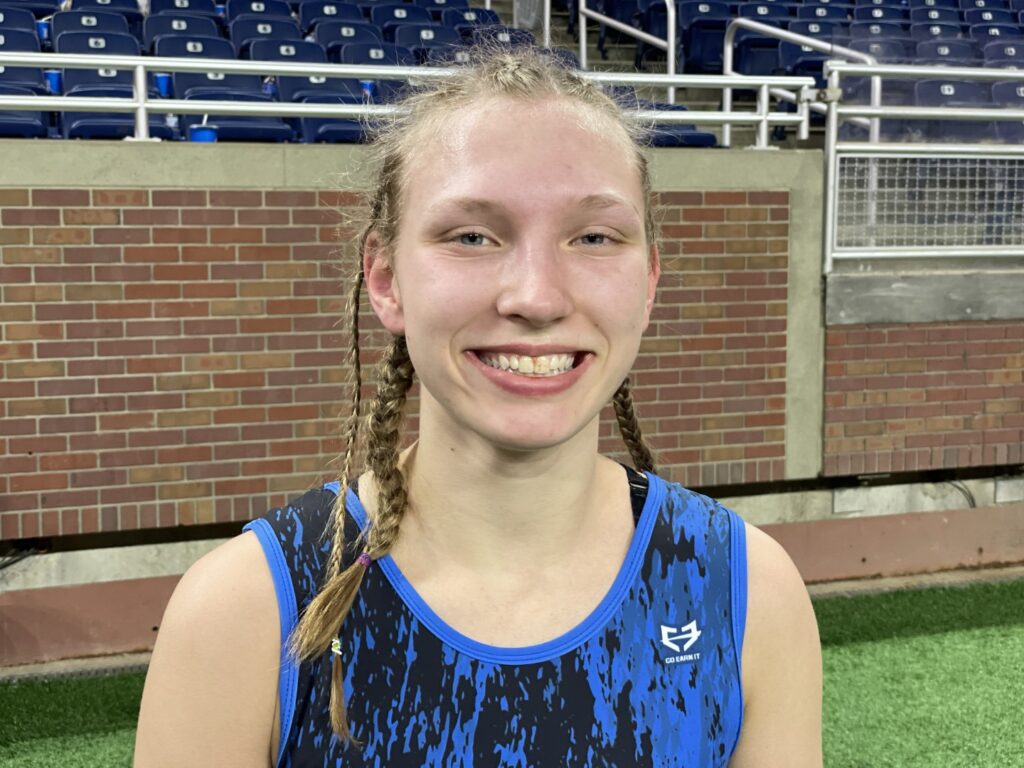 “I really wanted to (play both sports), but I also wanted to keep my grades up and I also knew that wrestling is better for my mental health,” she said. “I go to ARES (Wrestling Club) practice and that’s the best thing I’ve done for my mental health. … I just get to wrestle and that really helps me release everything, whereas basketball doesn’t help me do that as much. I still love it, but it’s not a release for me as much.

“And wrestling is more fun and I’m better at it than I was basketball, which sucks, but you know, it is what it is.”

Basketball was the first sport that the 5-foot-7 Pendell played, back in fifth grade. Pendell picked up wrestling three years ago and she’s proven a quick study.

Last season, Pendell wrestled at 135 pounds. She placed seventh in the state with a record of 9-5, including 6-2 against girls competition.

This season, Pendell competed at 140 pounds and finished with a 19-6 record. At the state finals, she defeated East Jackson senior Isabel Worthing, 2-1, in a tie-breaker.

This was the first season girls wrestling was sanctioned by the Michigan High School Athletic Association, meaning girls wrestled alongside boys on the big stage of the state finals March 4-5 at Ford Field. While Pendell thrived in that environment and relished in the achievement, her thoughts immediately went to her teammates who helped her get there.

“I enjoy that part of wrestling because I get to have the guys and the girls. It’s not just the girls. It’s a good mix. I like that we wrestle beside the boys – it definitely made me feel more comfortable, if that makes sense. That’s what I’m done. I’ve wrestled with the best of the best in the state.”

Pendell is very driven to succeed regardless of what she’s doing, to the point that Maddox said she can be a little stubborn.

On the flip side, once she makes her mind up, she’s going to make it happen.

“I’m very impressed with her. Sometimes, I feel like she takes too much on, but overall she is a good student,” Maddox said. “I’m just excited to see her growth in the next few years — not only as a wrestler, but as a young woman.”

Pendell has two more years before she graduates from Montague, but she’s already thinking about pursuing a career in dermatology or veterinary science.

Those plans could always change, but Pendell does not intend on switching up her routines. She’ll keep working in the classroom, on the mat, in the band room – you name it.

“Because I love the sport, I have the drive – I want to do stuff. I want to go to Grand Rapids and wrestle and then go to practice on Monday,” Pendell said. “I know people that don’t have a love for that and they’re not going to do that. Because I do, that has pushed me to become better. Wanting to become the best – that’s another factor.

“I’m not going to be cocky about (the state title) because I still feel like I have unfinished business. I definitely want to keep working.”