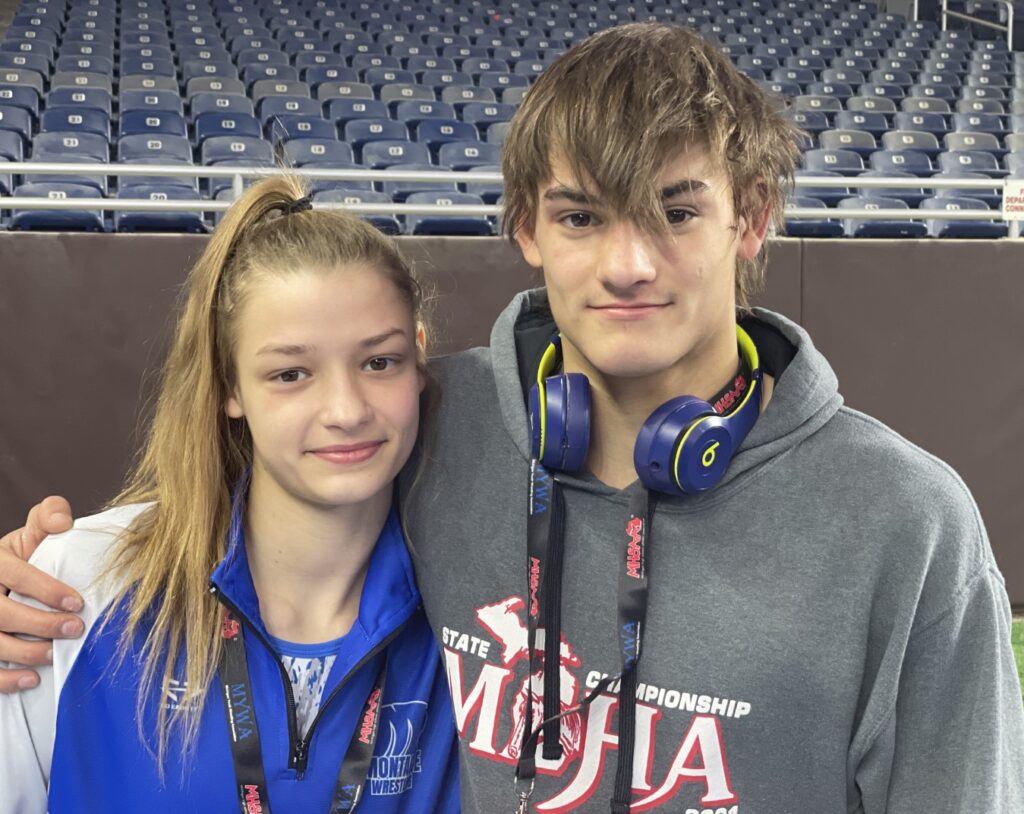 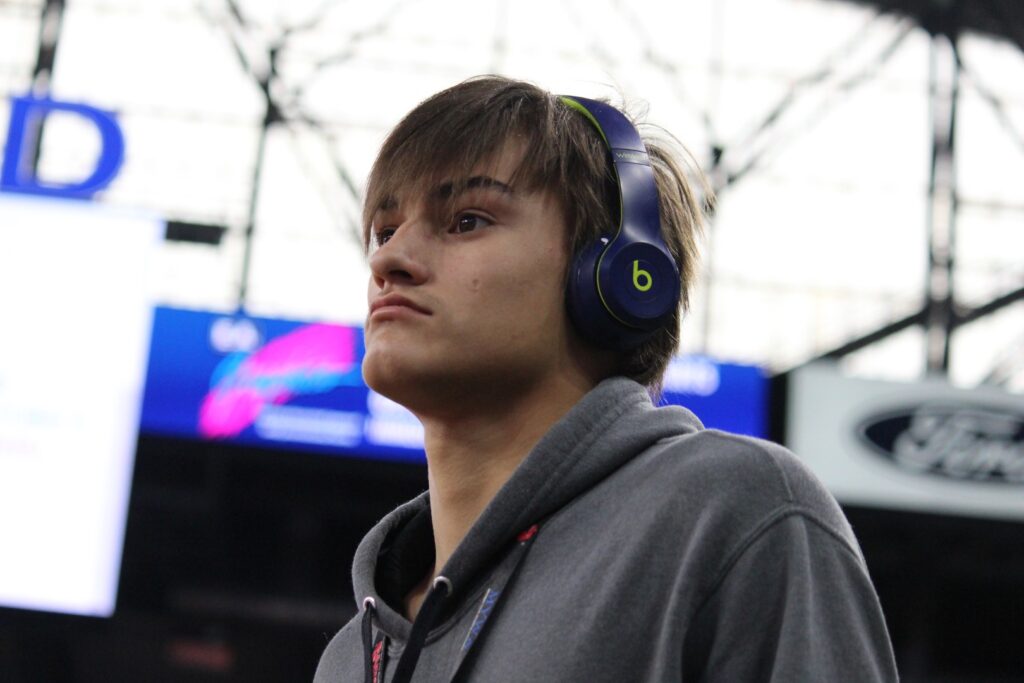 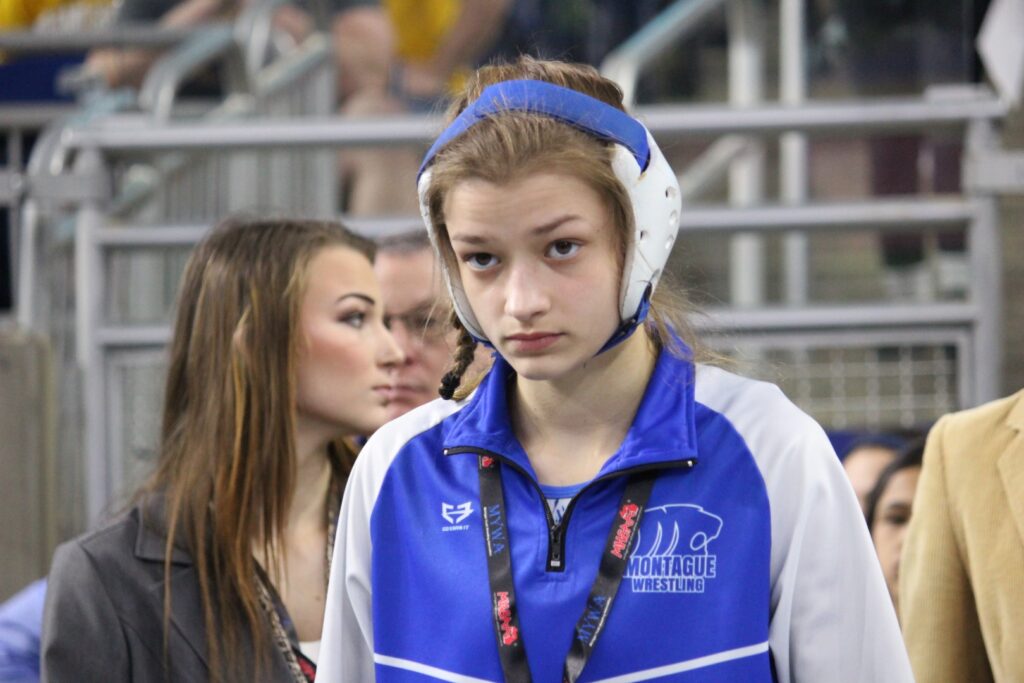 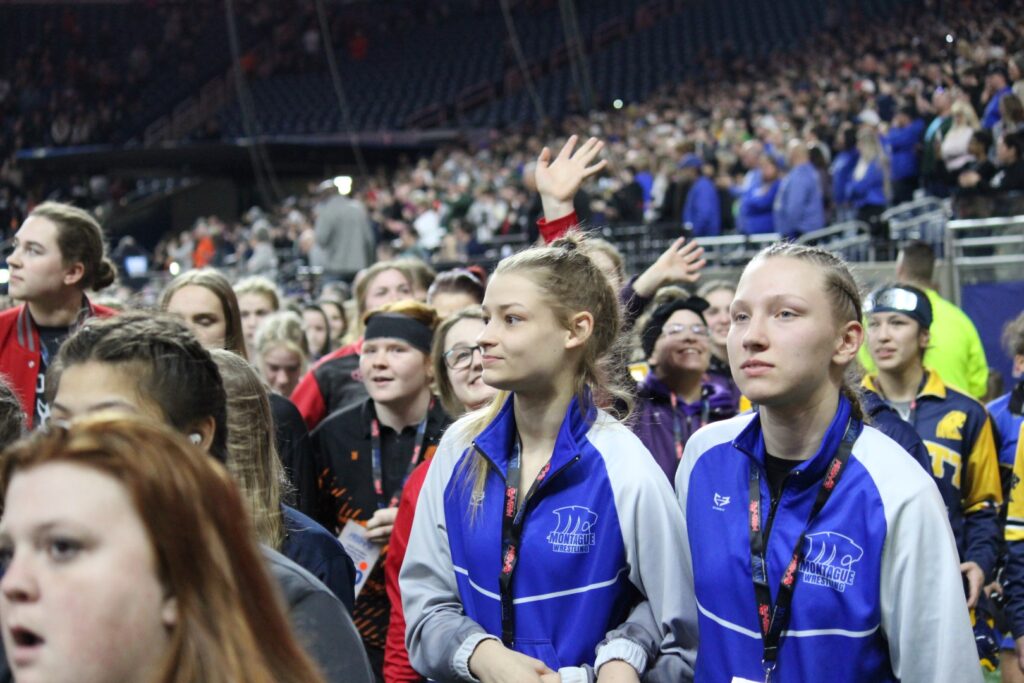 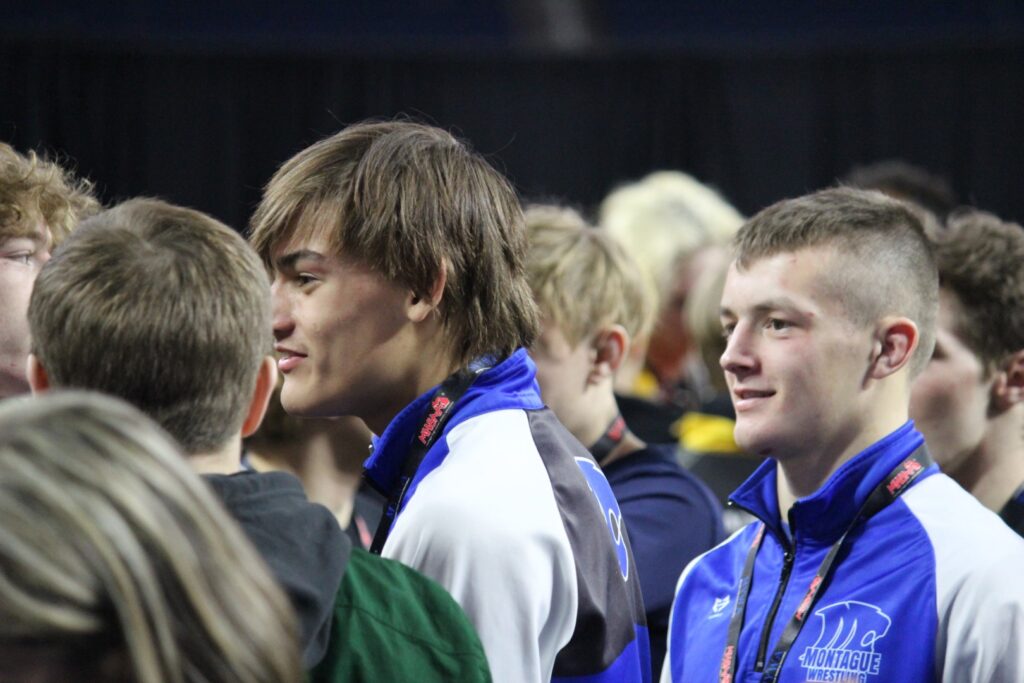 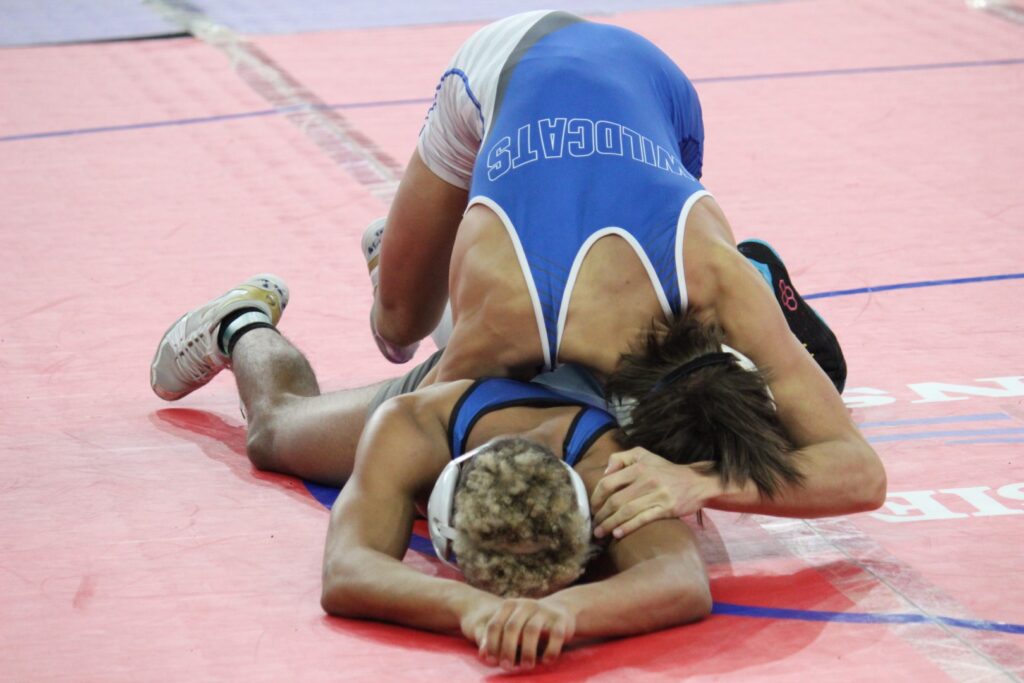 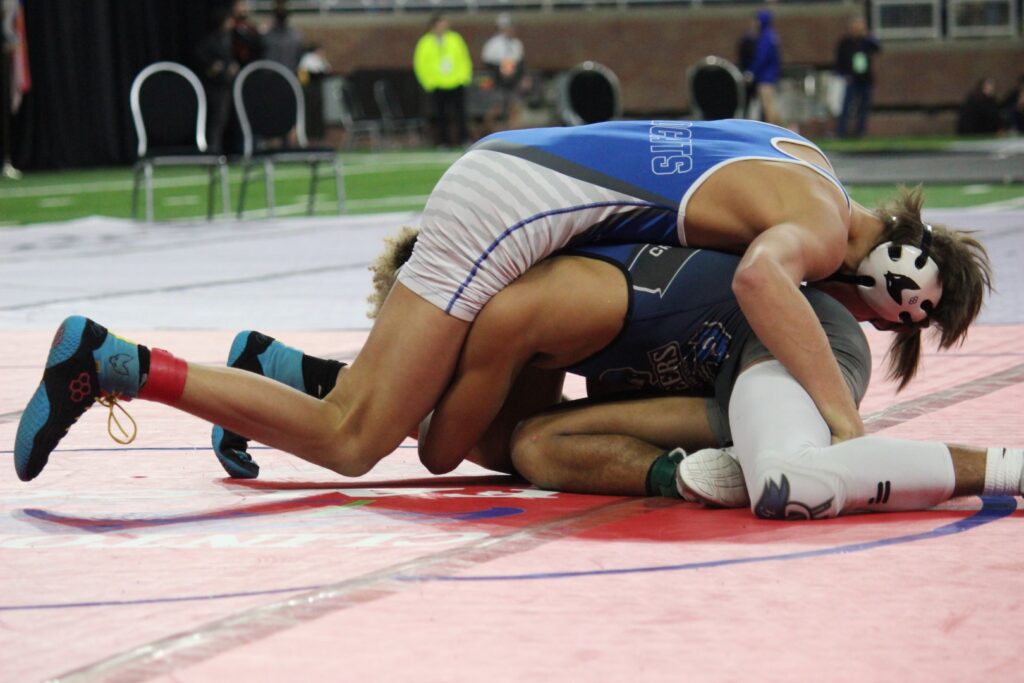 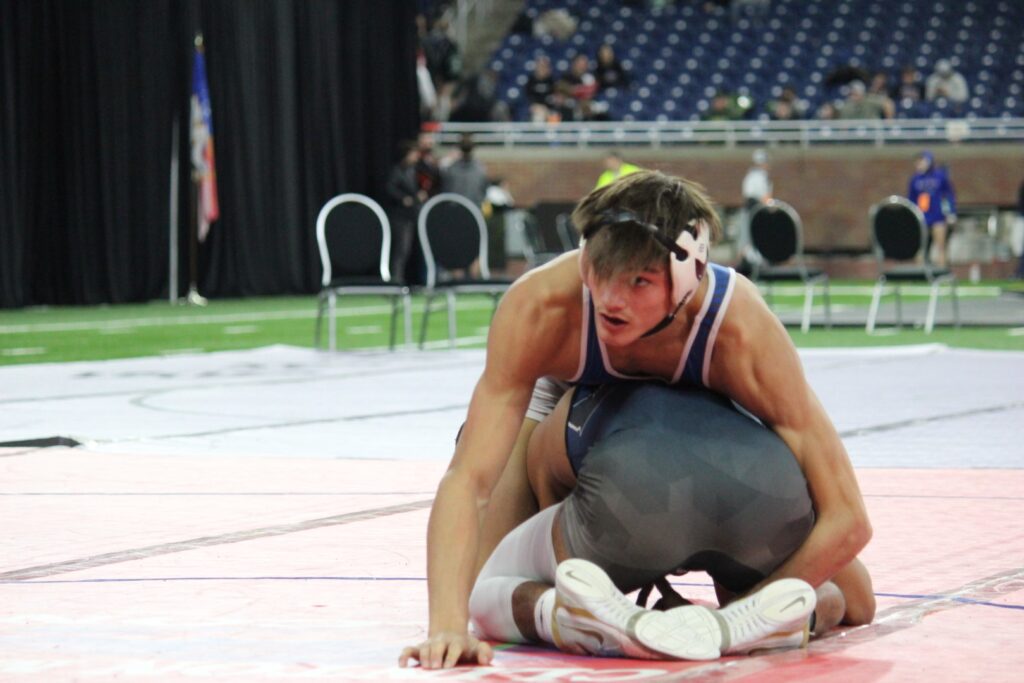 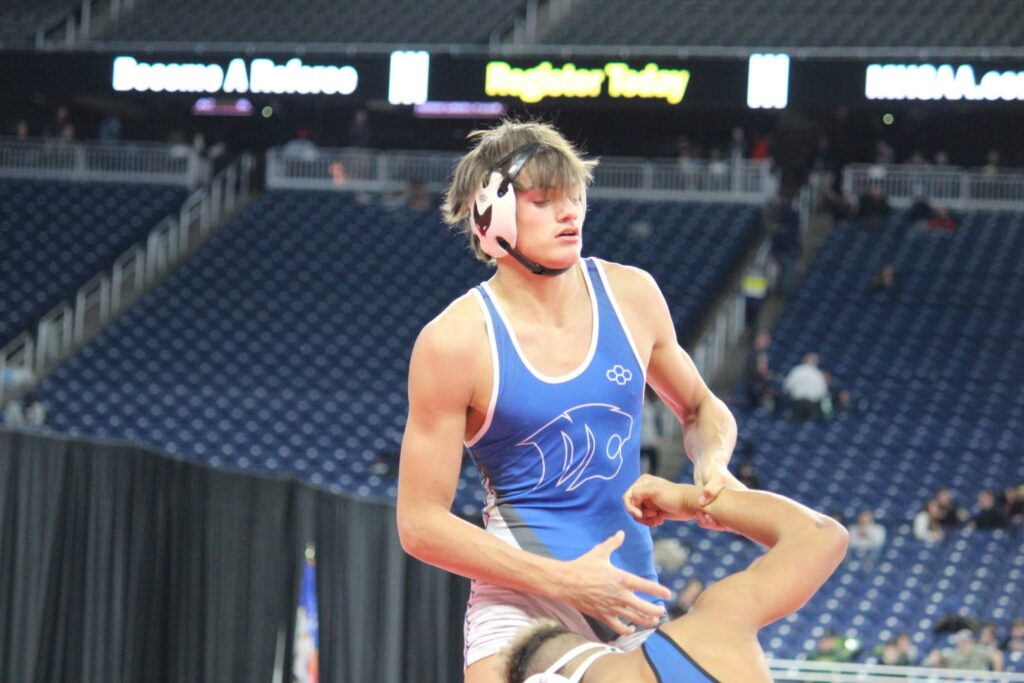 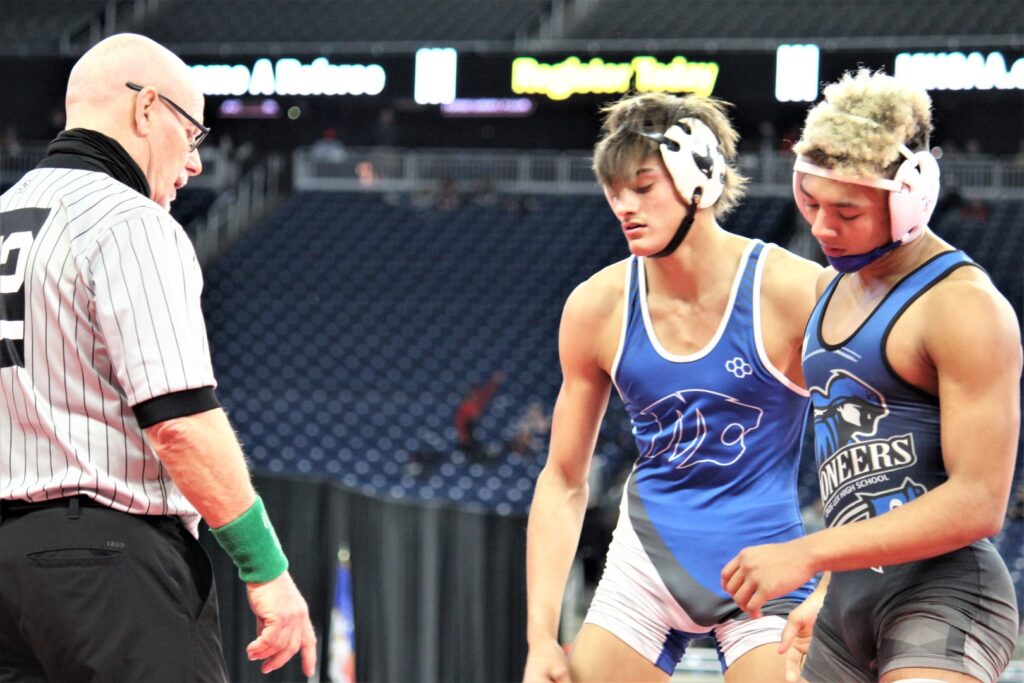 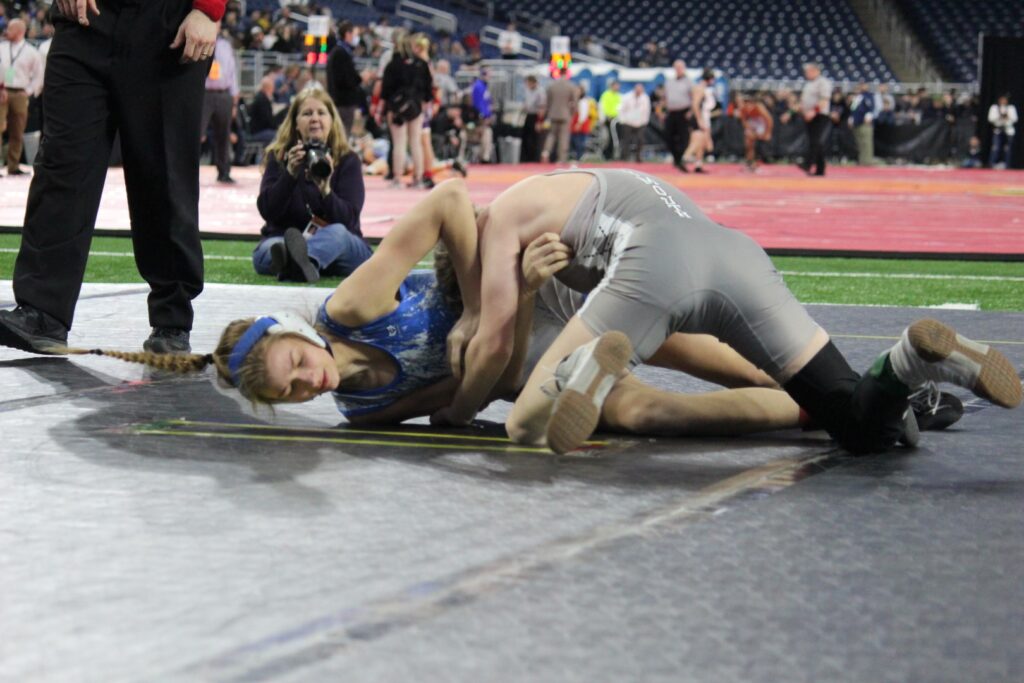 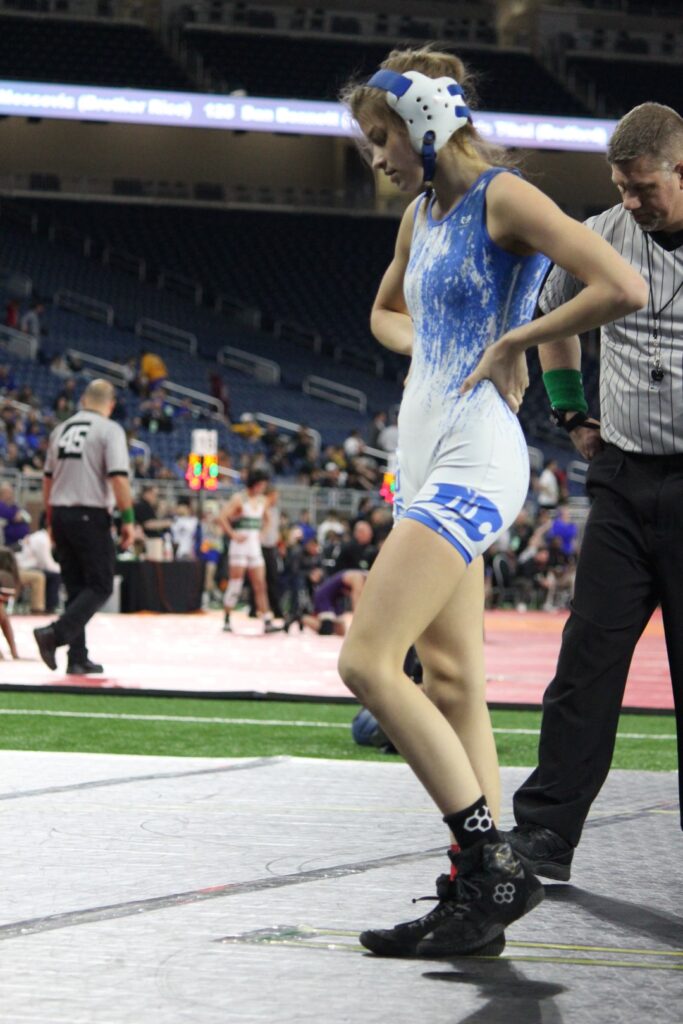 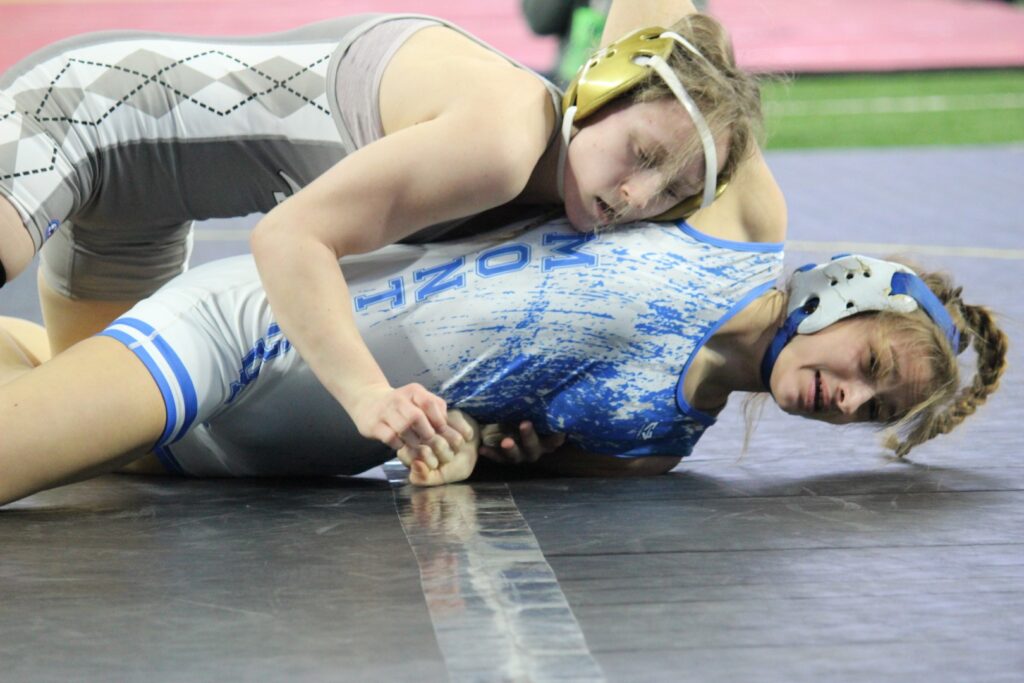 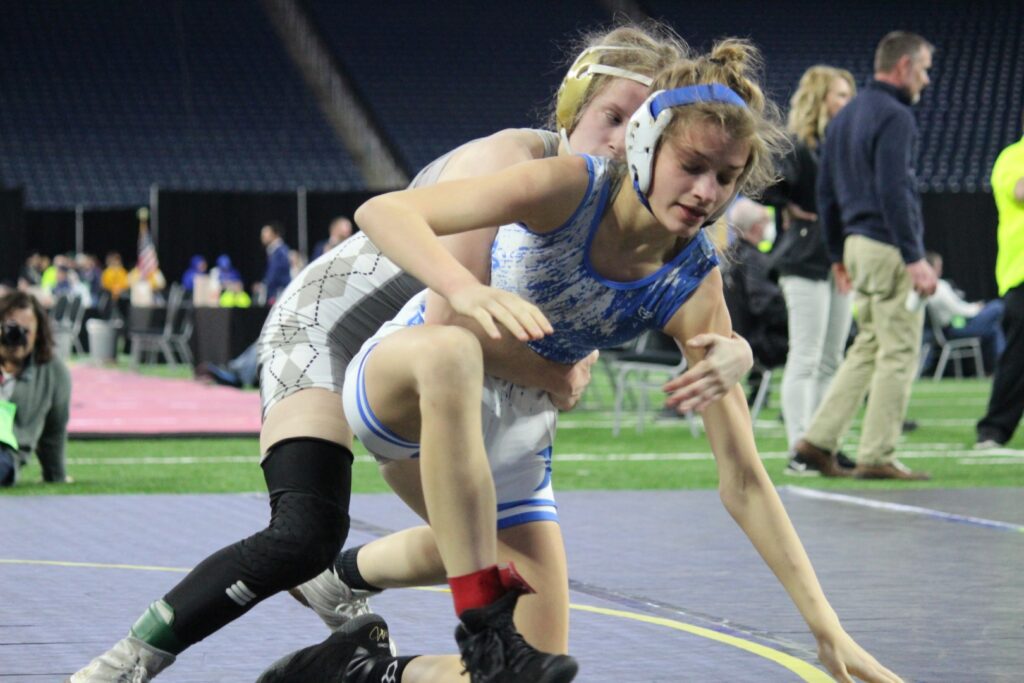 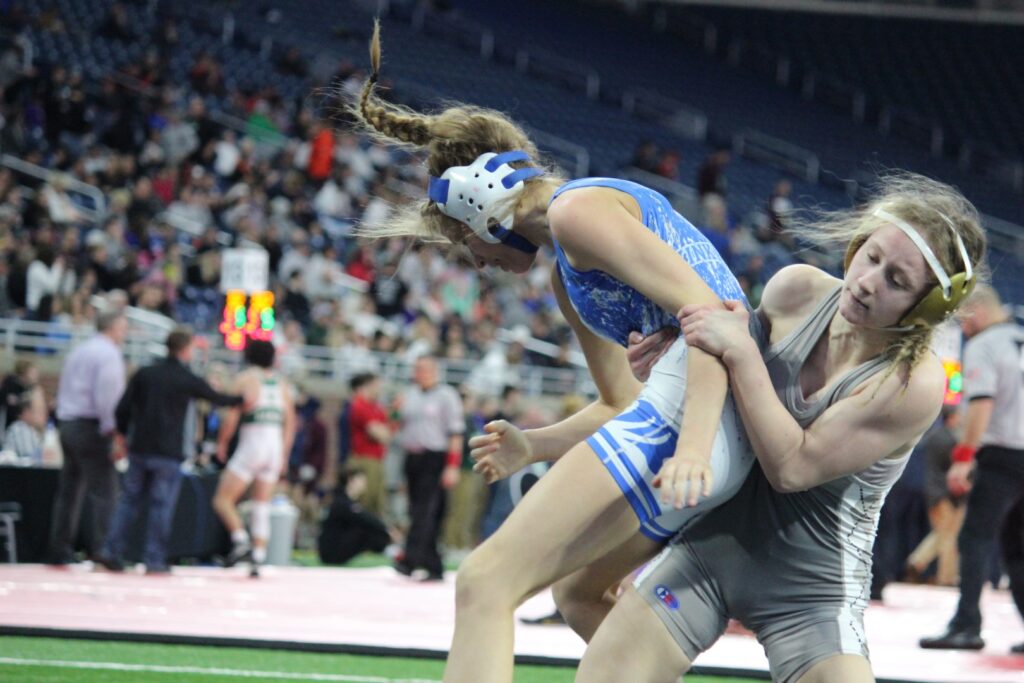 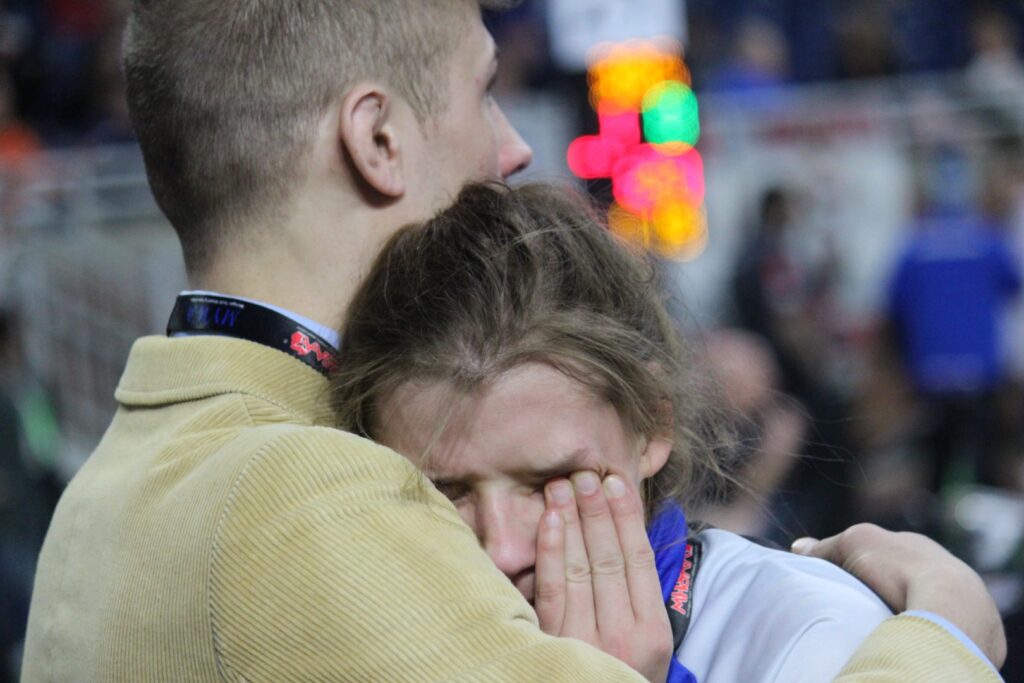 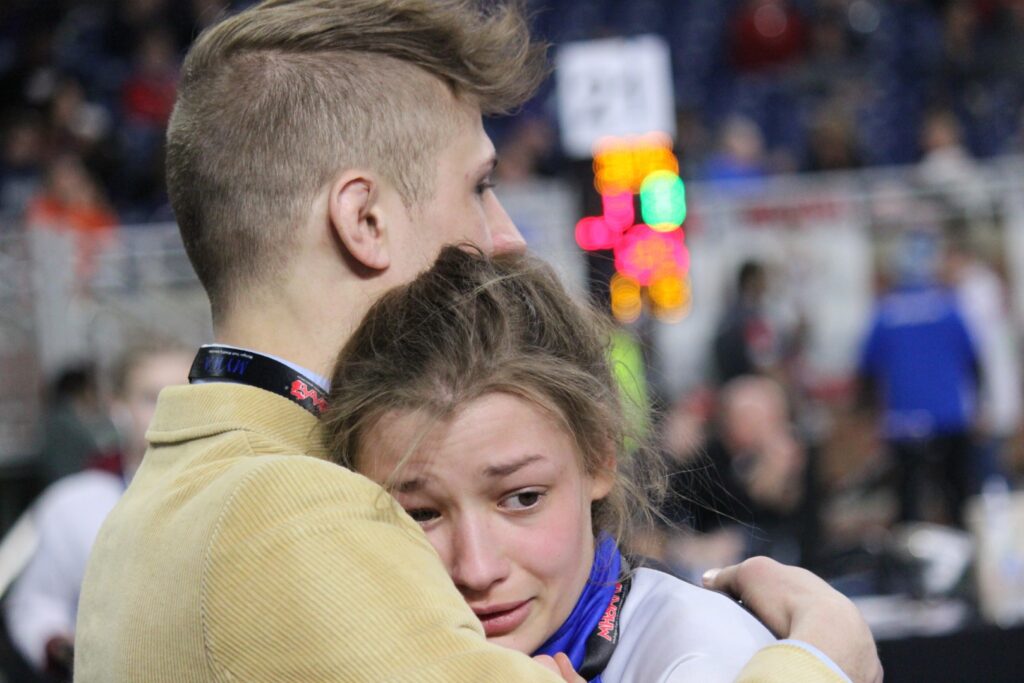 DETROIT – Montague siblings Tristan and Savannah Winkleblack made some history together over the weekend at Ford Field.

They weren’t the only brother-sister act to perform well on the big stage. On Saturday, Stevensville Lakeshore senior Zamuel Thompson and Eaton Rapids sophomore Sydney Thompson both captured state championships. They’re siblings, even though they attend different schools.

Deep down, the Winkleblacks want the best for each other. But would they really be siblings without a some fun banter?

She poked back at her brother: “He can be annoying sometimes, but it’s cool.”

Montague wrestling coach Kris Maddox said that the Winkleblacks often try to one-up each other.

Tristan Winkleblack had bragging rights from the weekend’s tournament, as he finished one spot higher than Savannah. But this also was the second-straight season she’s earned all-state honors, while her brother had never advanced to the state finals prior to this season, so point Savannah.

“It’s kind of cool, siblings wrestling on the same team, same stage,” Maddox said. “Dividing up at the end of the season, each of them kind of having their own little run – Savannah taking sixth and Tristan taking fifth. It’s neat, I guess – and difficult at times.”

Tristan Winkleblack finished the season with a 43-8 record. Savannah Winkleblack was 17-5 against girls competition this winter.

Tristan takes credit for getting Savannah into the sport.

They didn’t get much of a chance to watch each other over the weekend because they tended to wrestle at close to the same times.

Both have long, slender frames, but they have also feature their own wrestling styles.

“He’s really funky. You’ll think he’s on his back a second, and then the other guy will be on his back,” Savannah said about Tristan’s wrestling style.

Said Tristan: “She’s got a tough arm, so she gets you in a throwing position – she can throw ’em pretty good.”

Maddox said that it all depends on day whether or not the Winkleblacks get along or not. One day, they’re “exactly alike,” another day they’re “polar opposites,” he said.

Maddox added that the Winkleblacks’ father, Billy, pushes them and sends them to all the camps he can. The Wildcats coach said that both siblings have great potential in wrestling.

Tristan and Savannah Winkleblack tried not to give each other too much credit – you know, the sibling thing – but they caved a bit.

“I mean, it was a really good experience for me,” Savannah said. “I went to state last year obviously, but just like this huge thing, being at state, having my brother with me, is kind of nice.”

Added Tristan: “This is definitely a big up because both my freshman and sophomore year, I’ve lost in the blood rounds of regionals. To make it to state this year, my junior year, is pretty cool and to place – many people don’t get to get that opportunity. If it weren’t for my team and my coaches, I probably wouldn’t be here.” 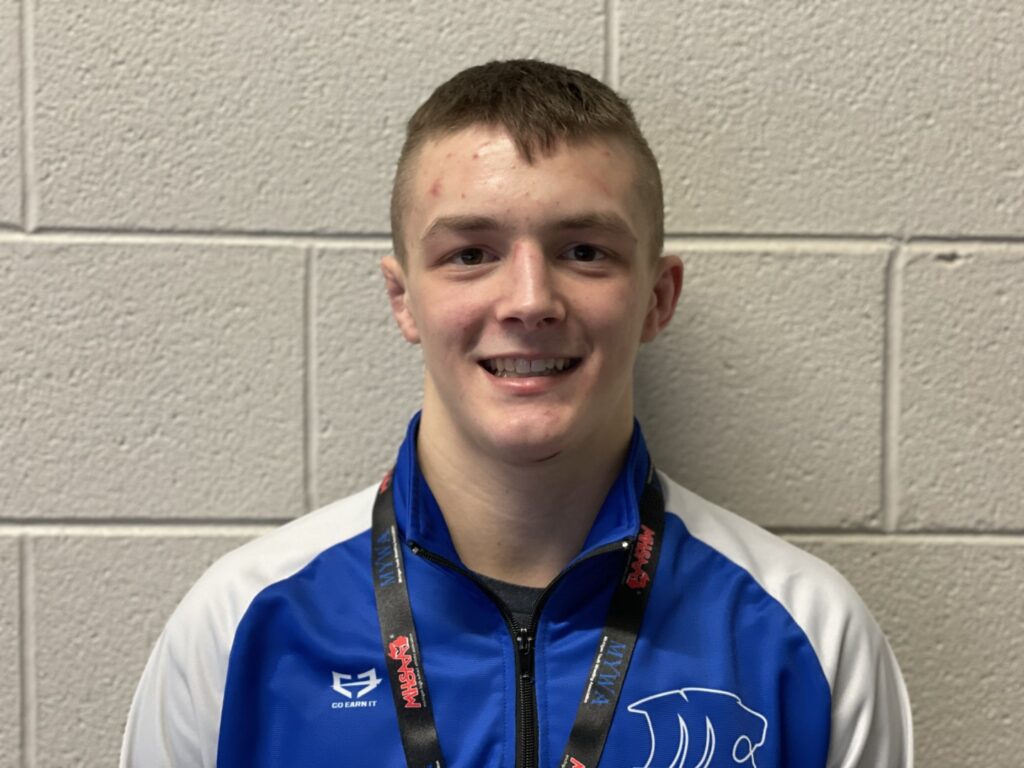 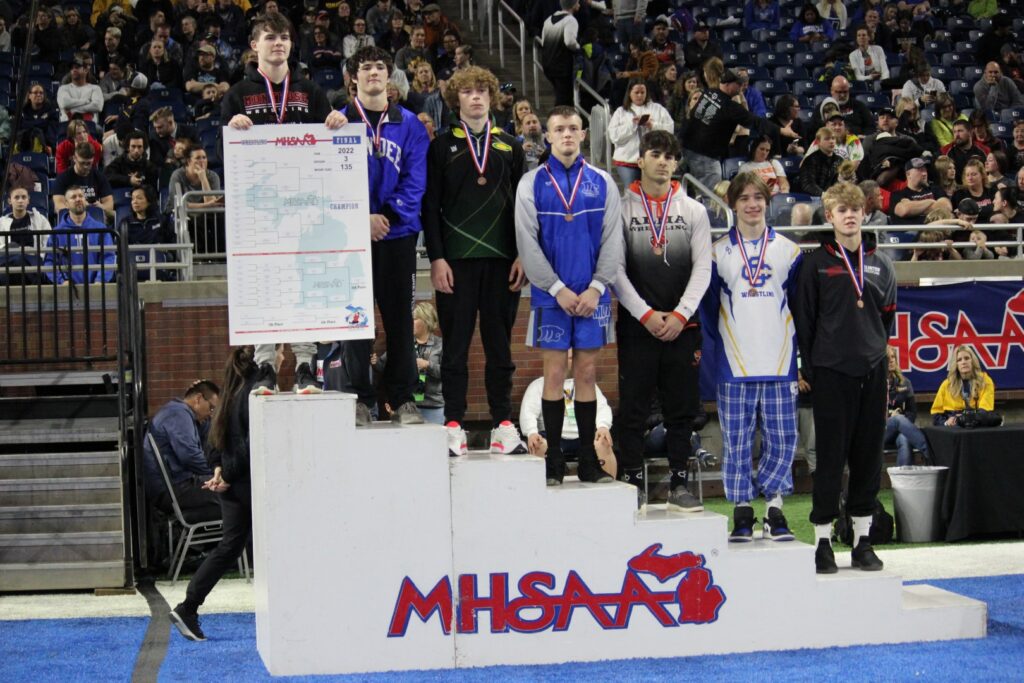 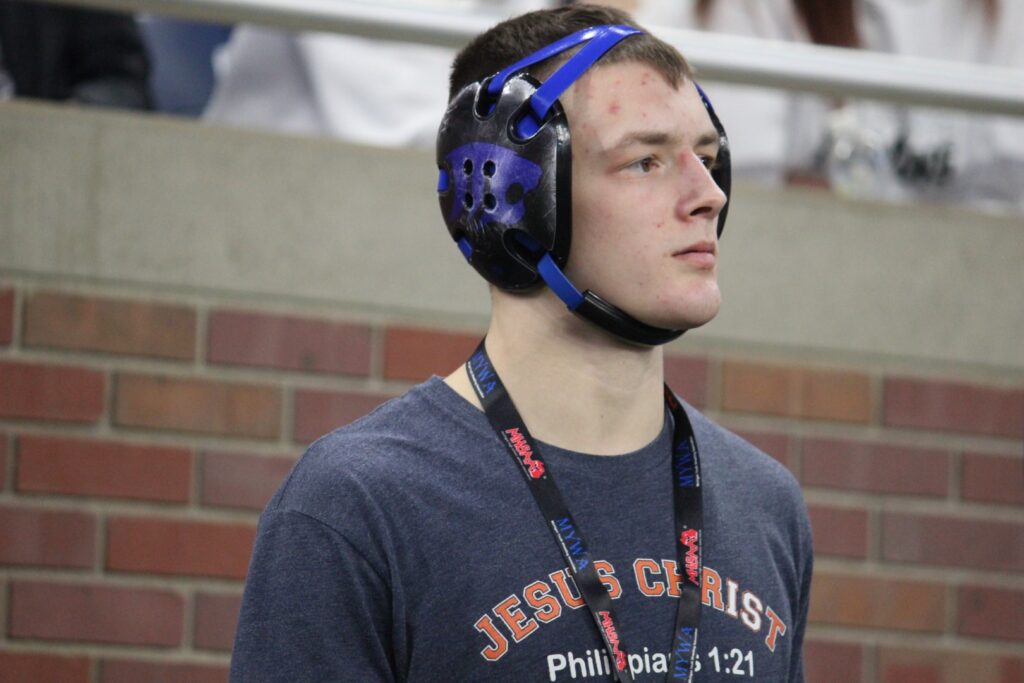 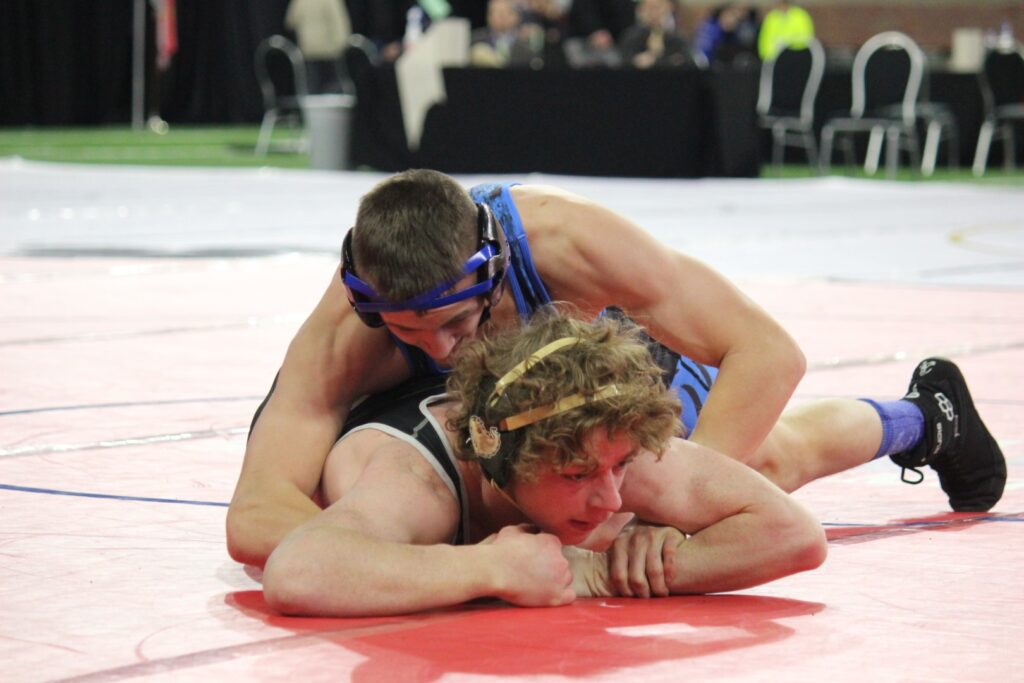 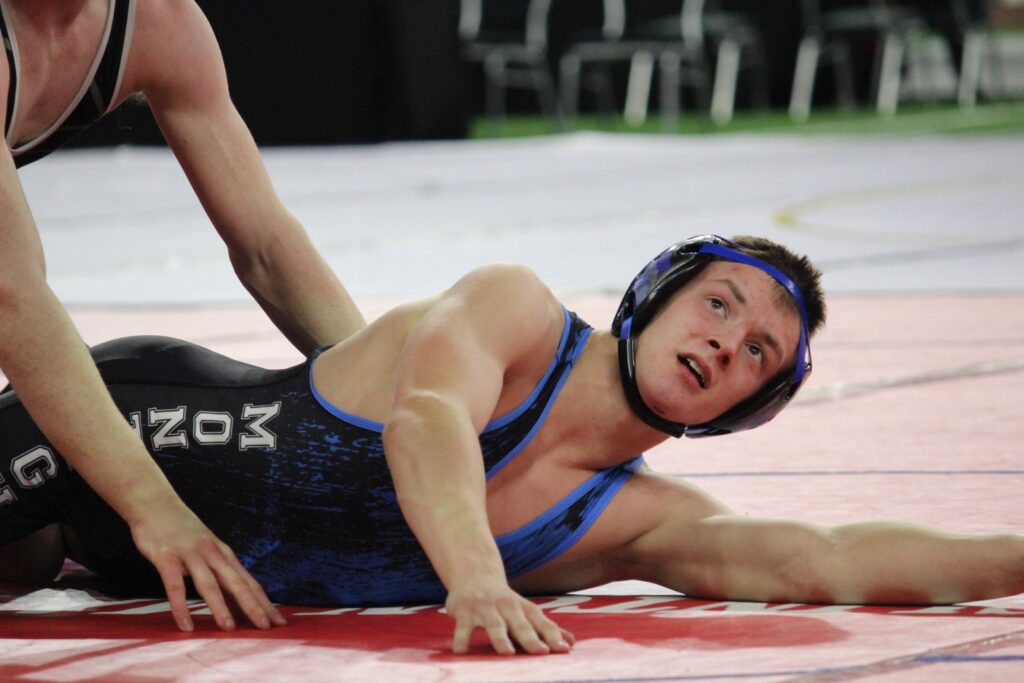 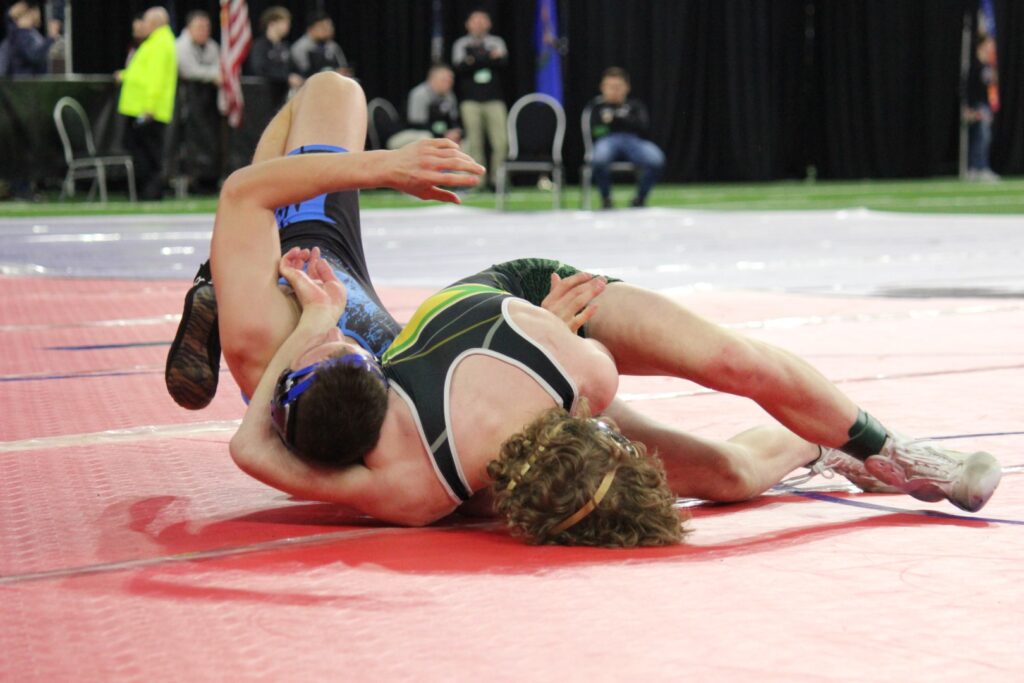 Montague senior Cale Coppess earned all-state recognition for the third straight season with his fourth-place finish in the 135-pound weight class of the Division 3 state finals.

In the process, Coppess became the all-time wins leader in Wildcats wrestling history. He finishes with 171 career victories, moving past Matt Lipka’s 169.

“I mean, I’m pretty stoked I got the record and that was one of my big goals for the year,” Coppess said. “Obviously, I wanted to get first, but that’s not what God wanted. He wanted me to place something different, so I’m going to go ahead and take whatever he can give me.”