‘No way we could win without them:’ Senior runners provide key depth for Hart juggernaut

Savanna Owens and Abby Pretty consider each other good friends.

But from the moment both of the Hart seniors began running in the Pirates’ cross-country program as sixth-graders, the competitive spirit really kicked in.

They learned right away about the expression “iron sharpens iron,” fundamental for the Hart girls cross country program, which is seeking a sixth straight Division 3 state championship this fall.

“I feel like when I first met Abby I was motivated, especially during cross because she was faster than me,” Owens recalled. “I was like, ‘I want to be like her. Let me get up there,’” she said with a chuckle.

“But she’s a great person. She’s really nice. She’s always there for you.”

Owens still wants to beat Pretty every race, and vice versa. They’re competitive amongst each other, but in a healthy way. It’s tough to run at the front of the pack in a program like Hart’s with names such as Ackley, Enns and now Jazwinski coming through, but Owens and Pretty are leaders in their own right.

They continue to illustrate, every runner matters. It showed up last fall, when Pretty recorded a season-best time of 21:47.5 at the state finals. She nabbed the No. 5 finishing spot on her team that day at Michigan International Speedway in Brooklyn. Pretty helped the Pirates sew away their fifth consecutive state championship, tying Rockford for the Lower Peninsula girls record of most titles in a row.

Without the depth that runners such as Owens and Pretty provide, Hart does not reach its lofty program status, according to Pirates coach Terry Tatro. 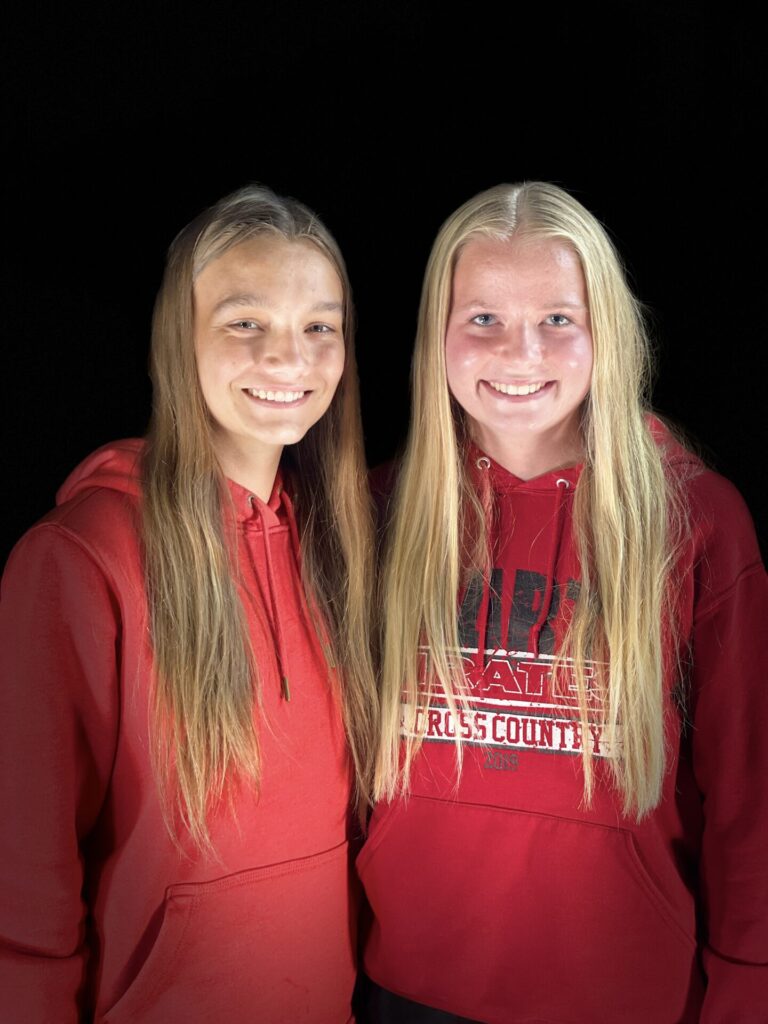 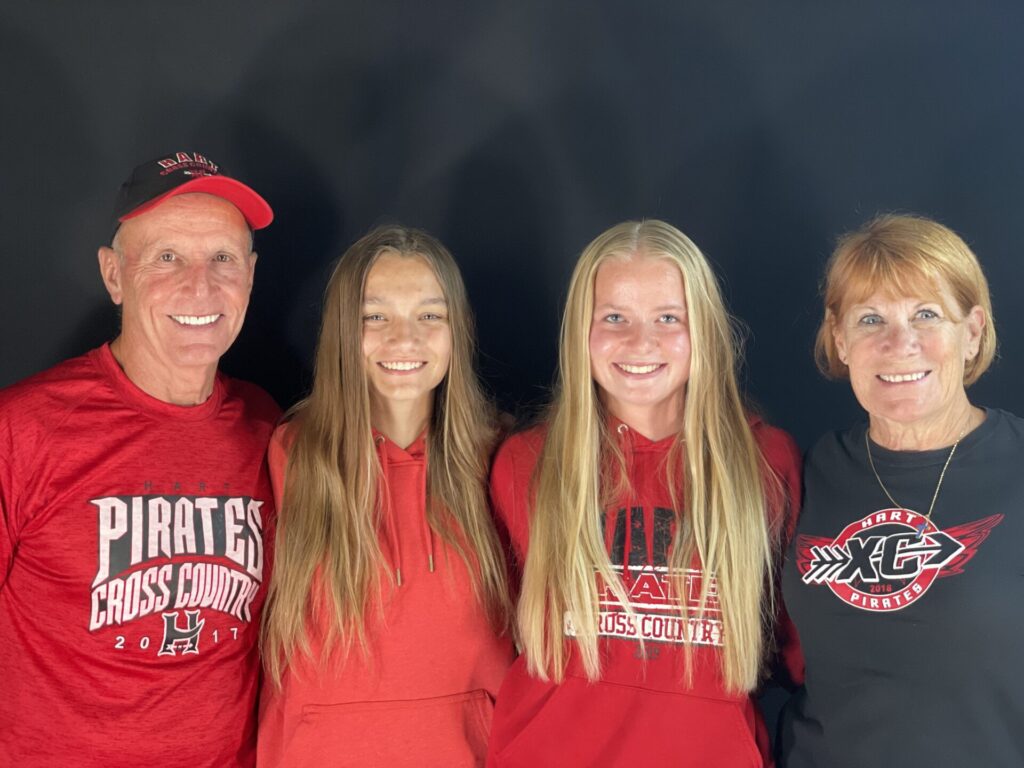 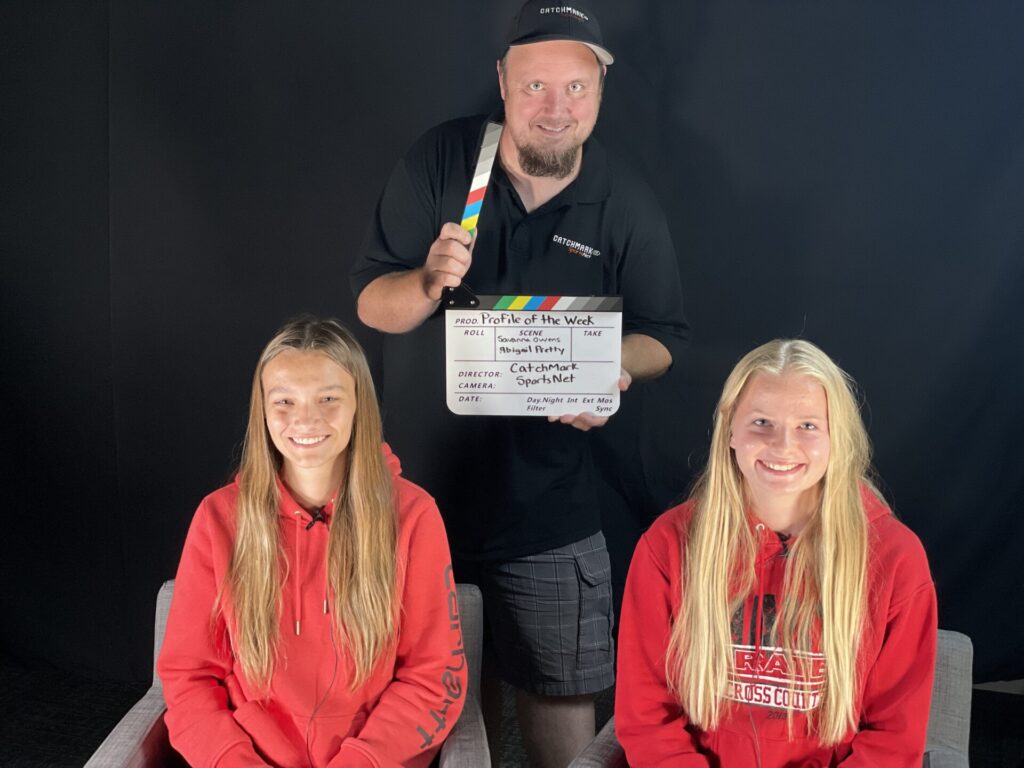 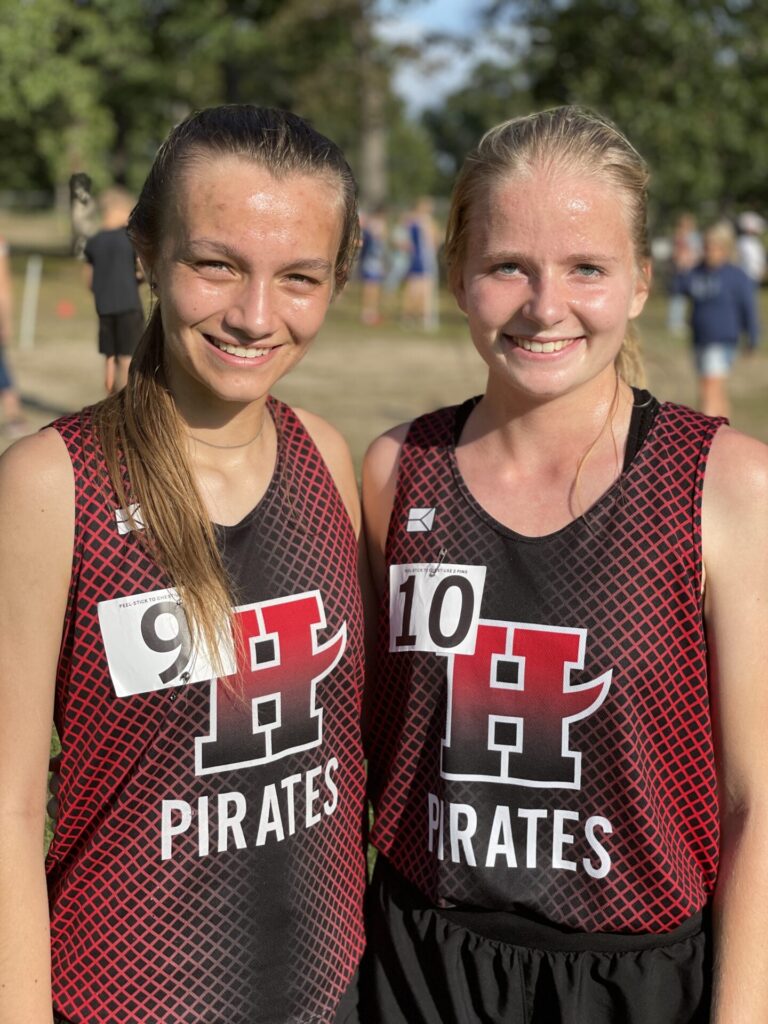 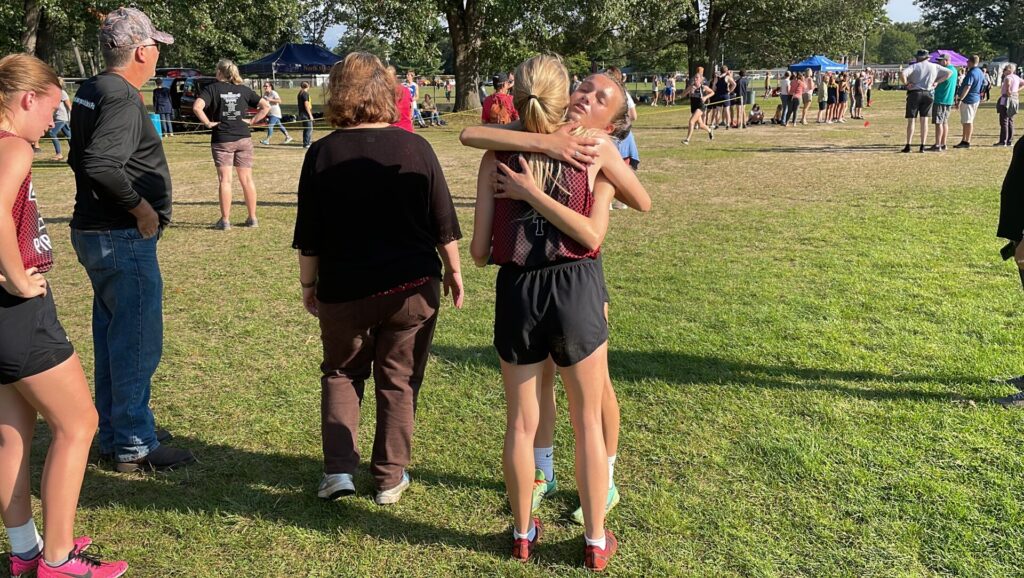 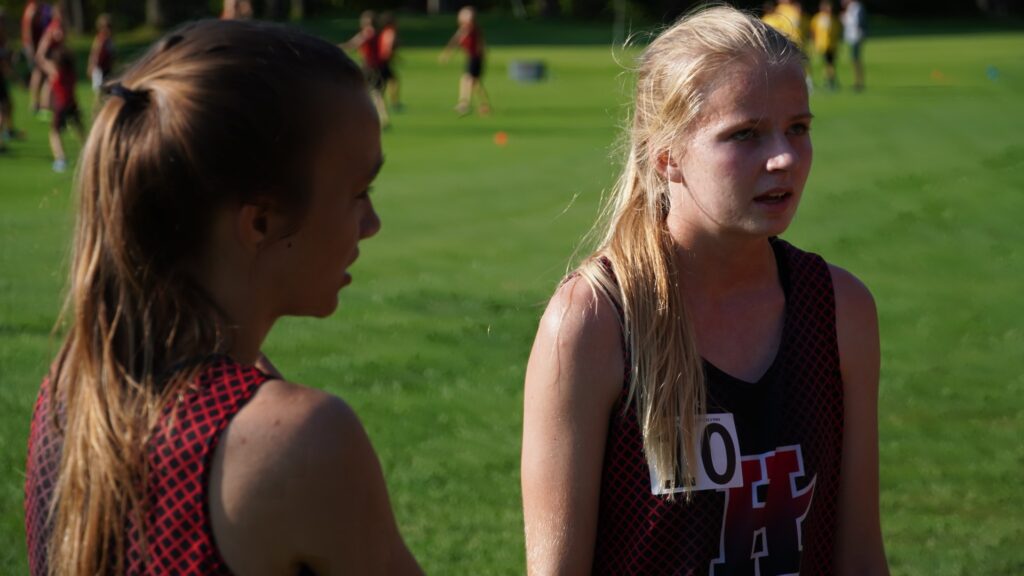 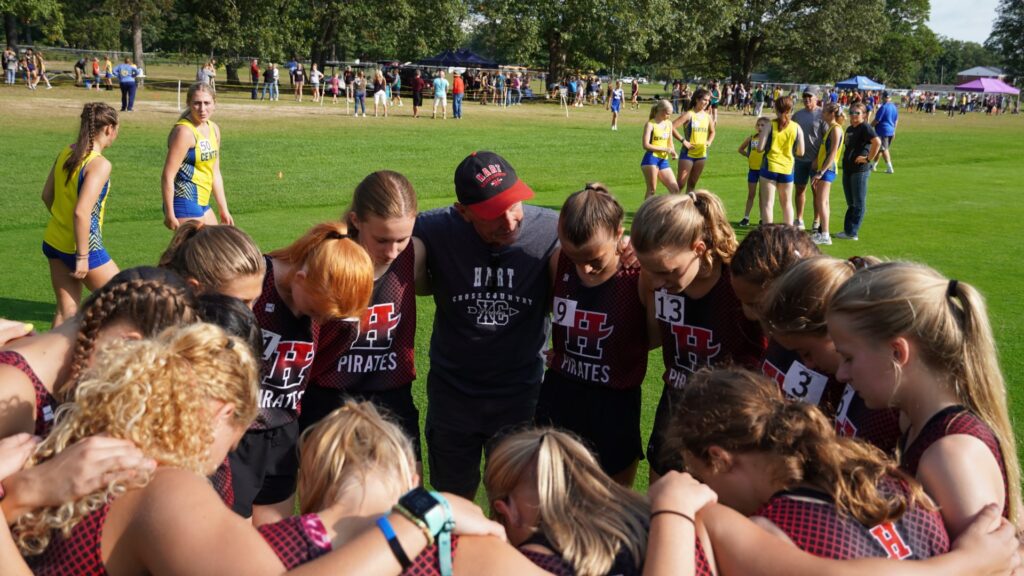 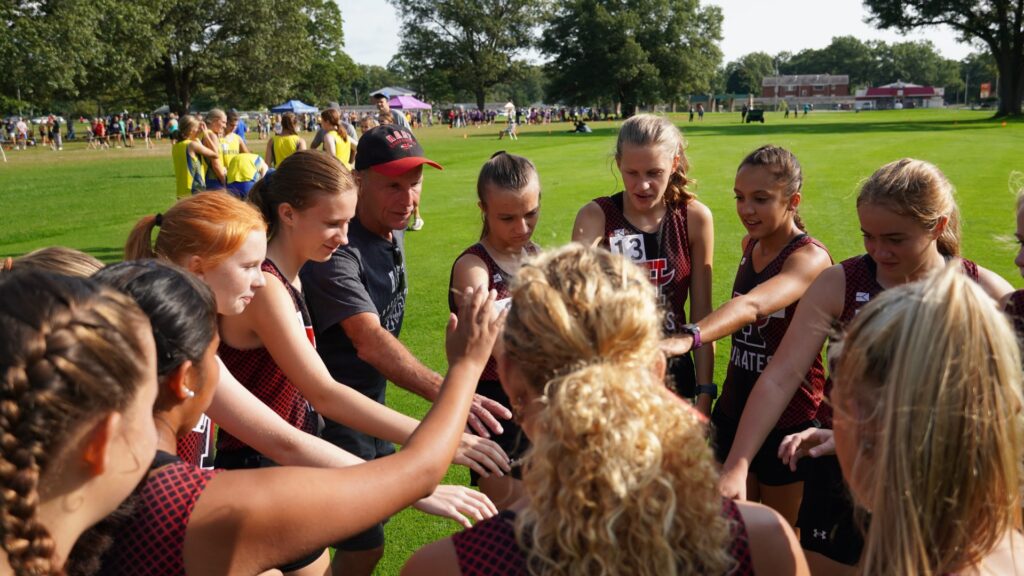 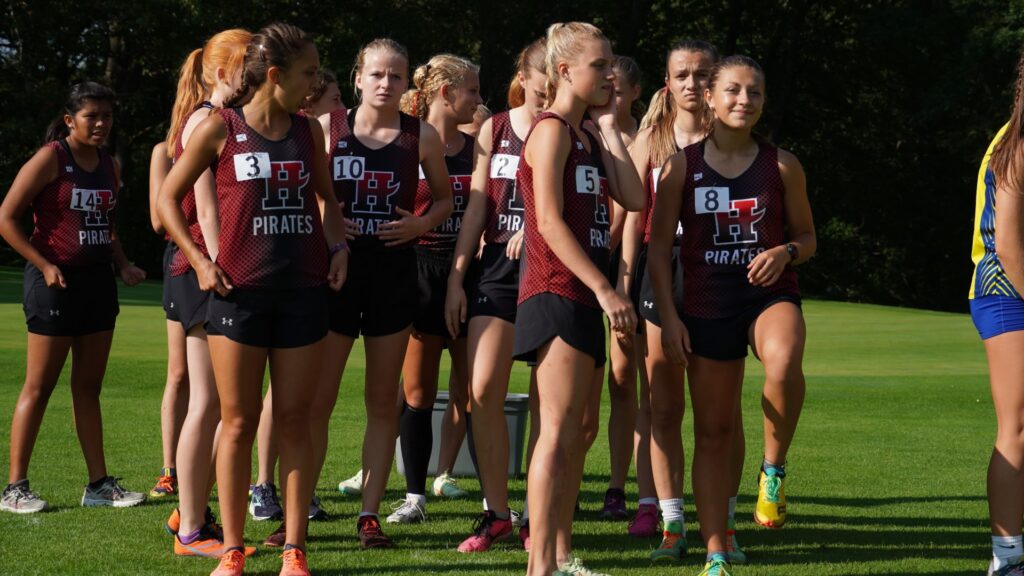 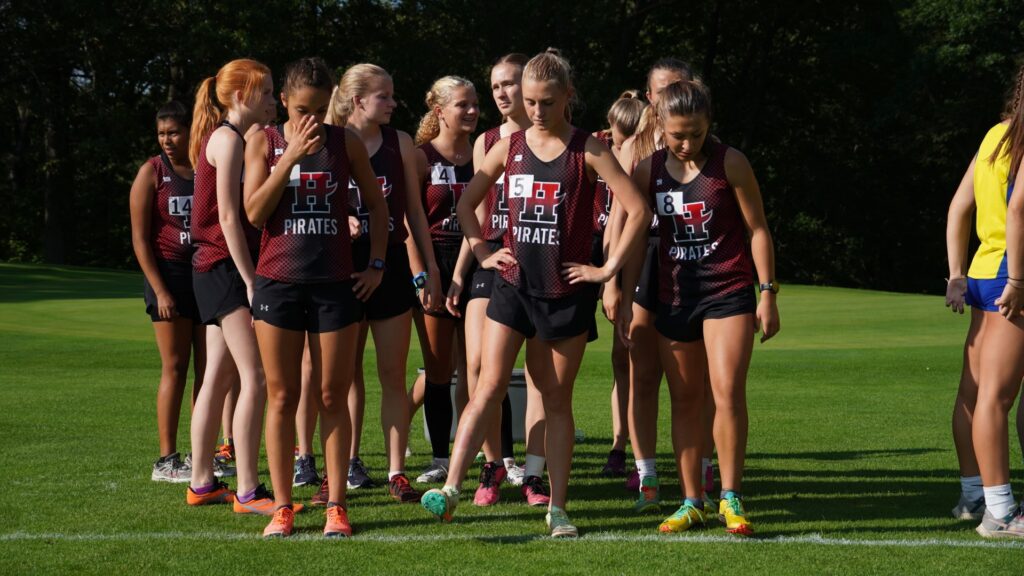 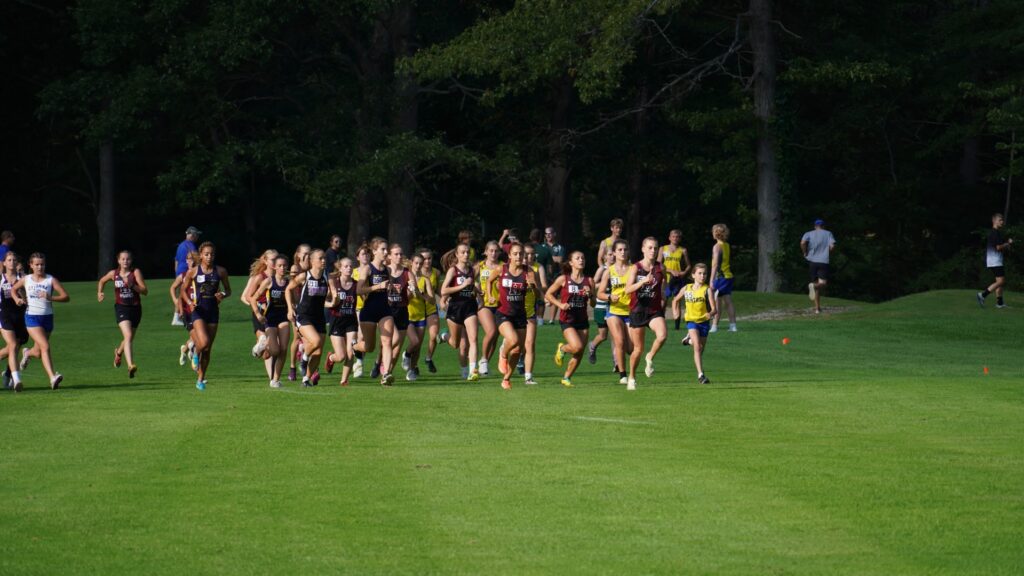 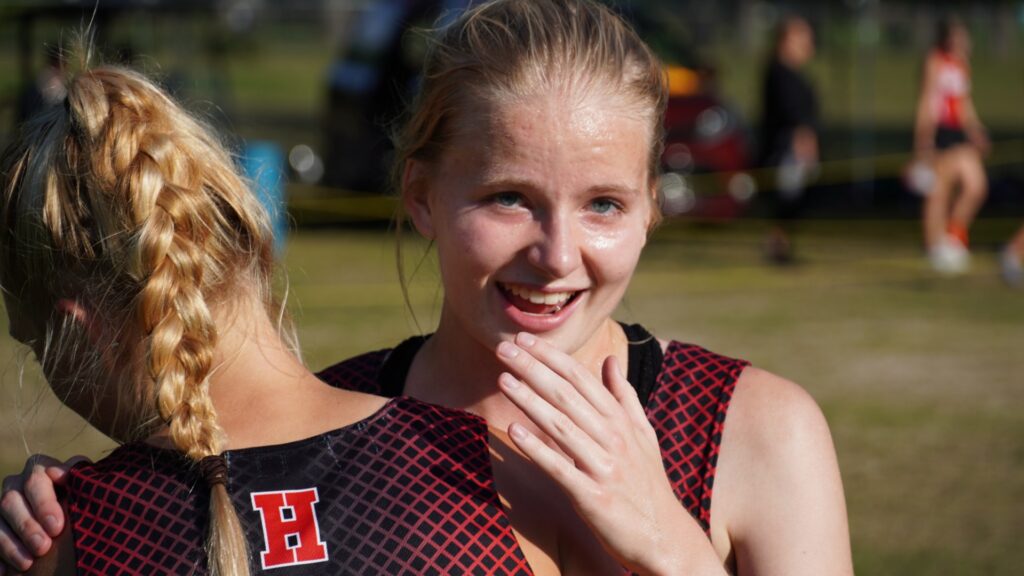 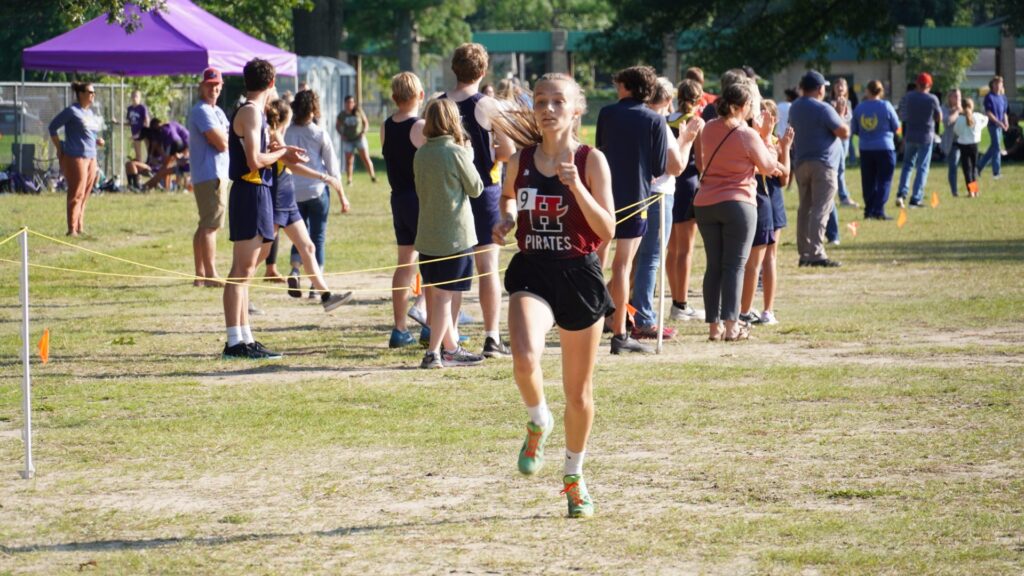 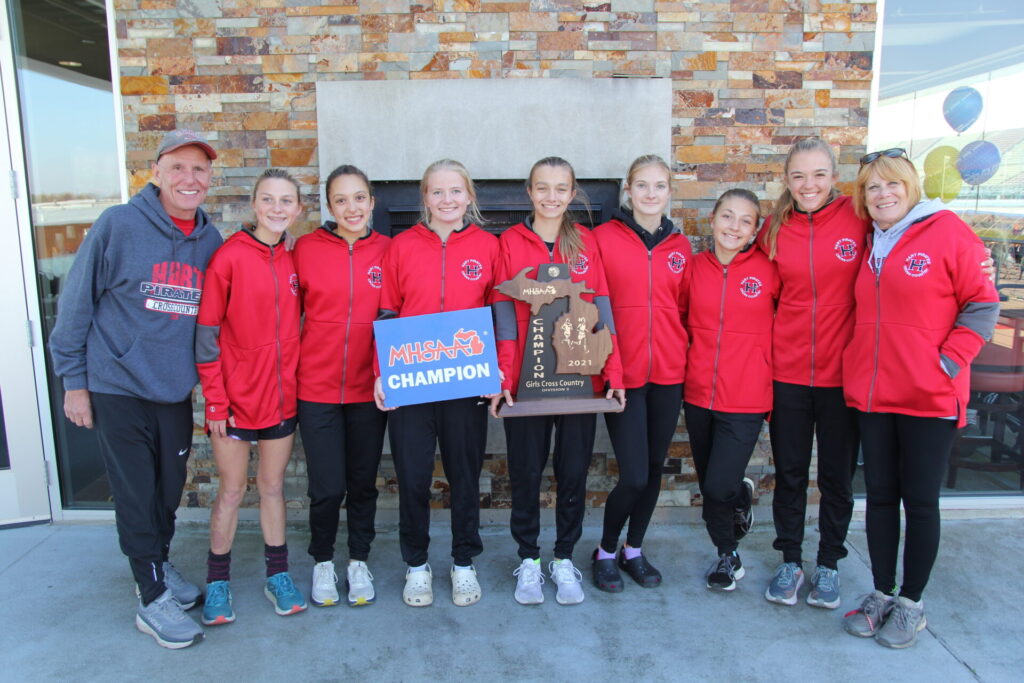 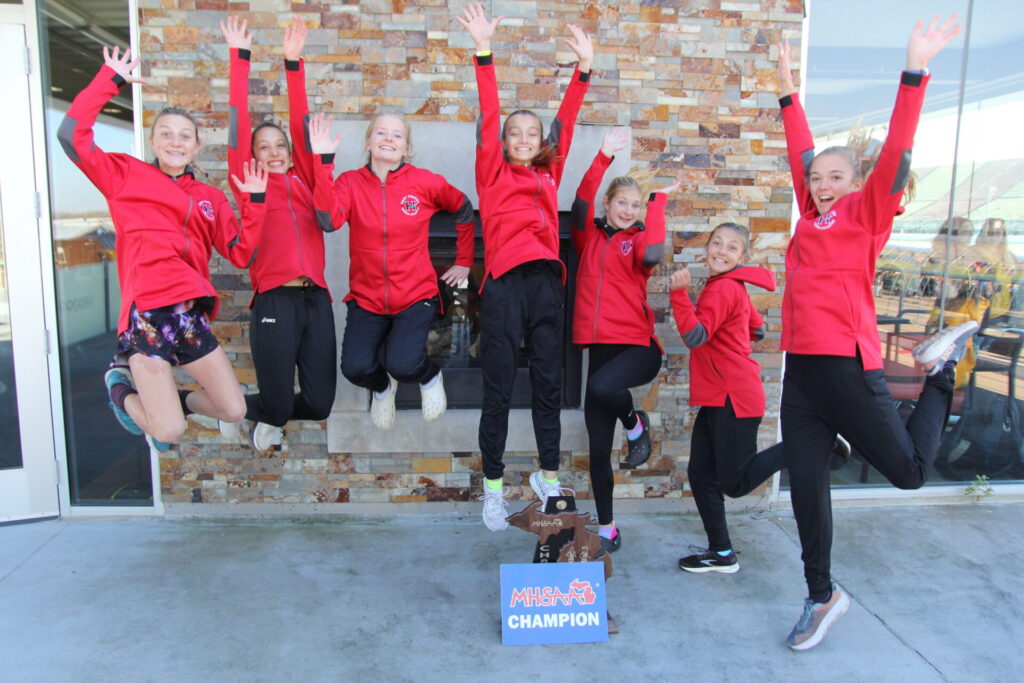 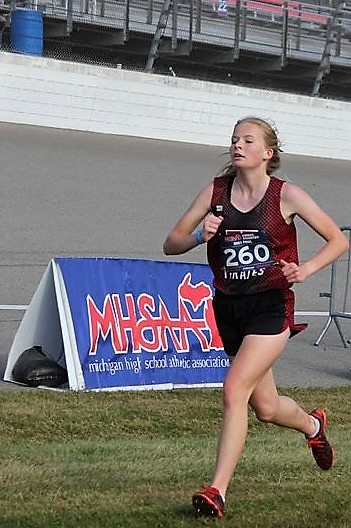 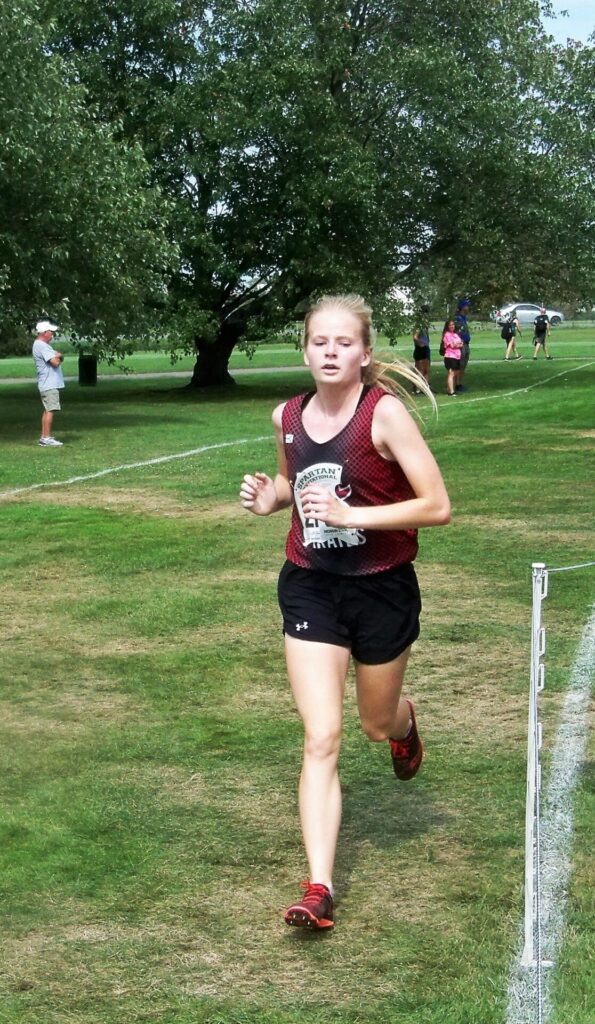 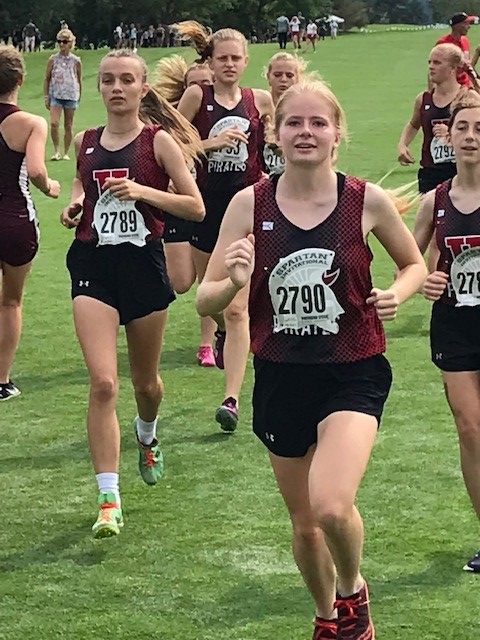 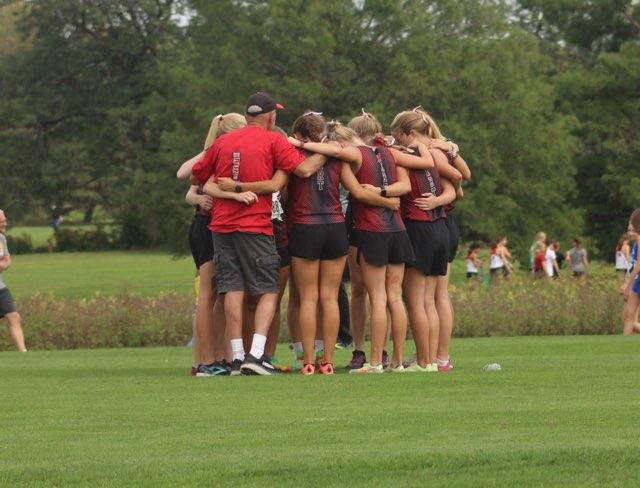 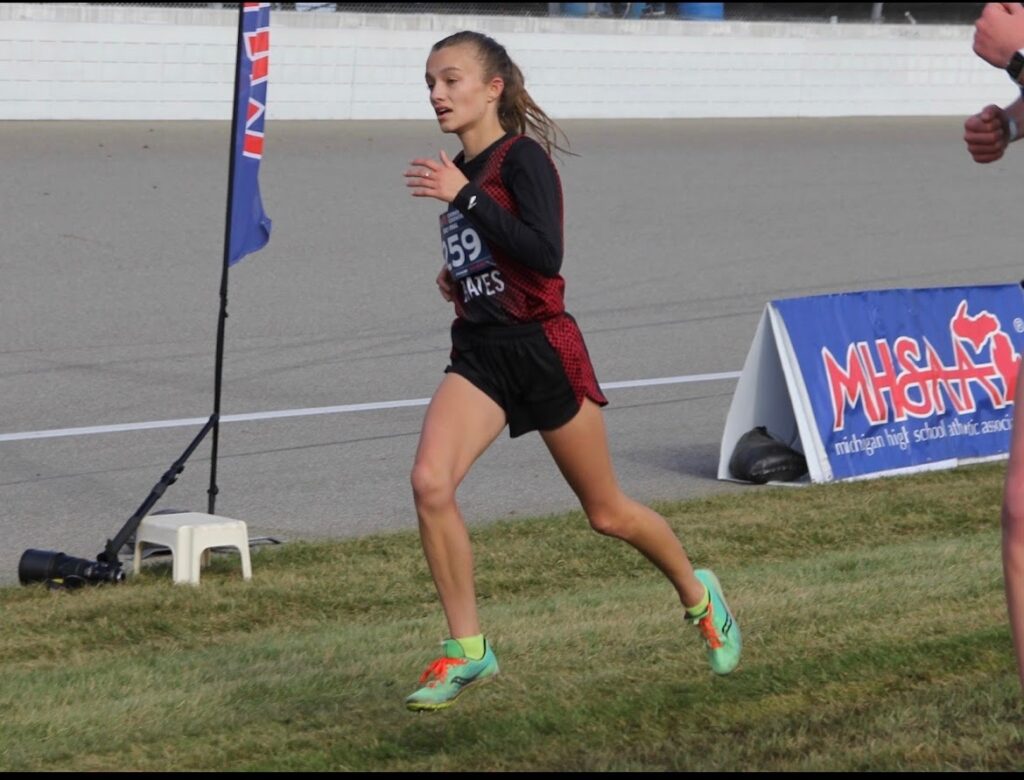 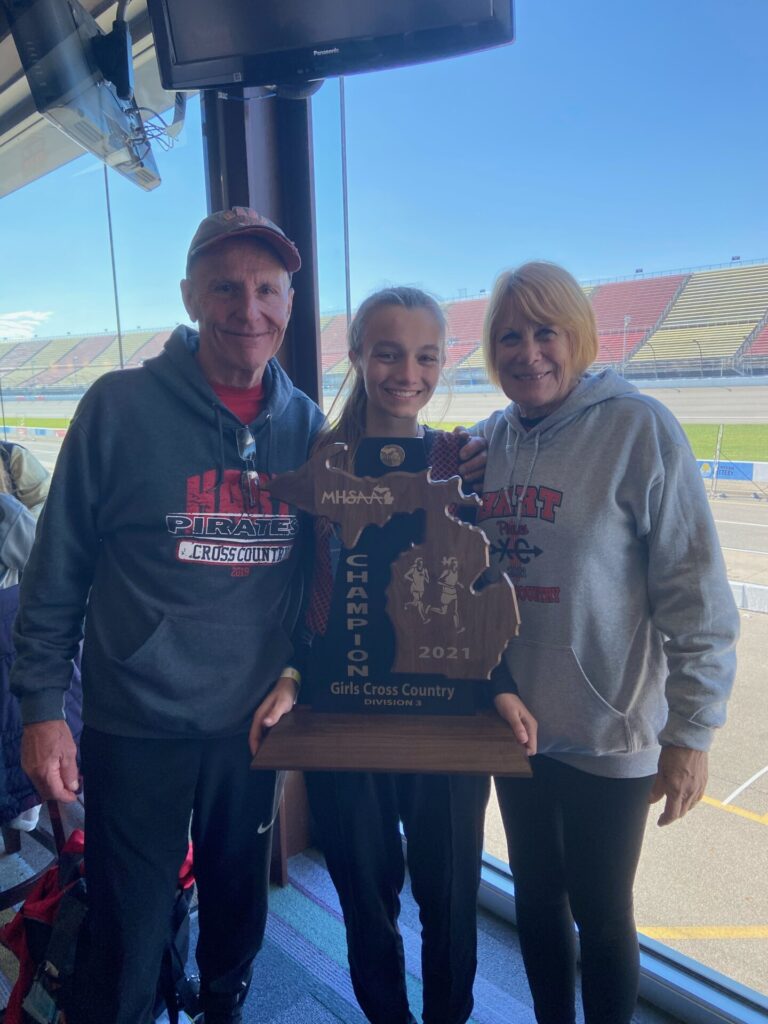 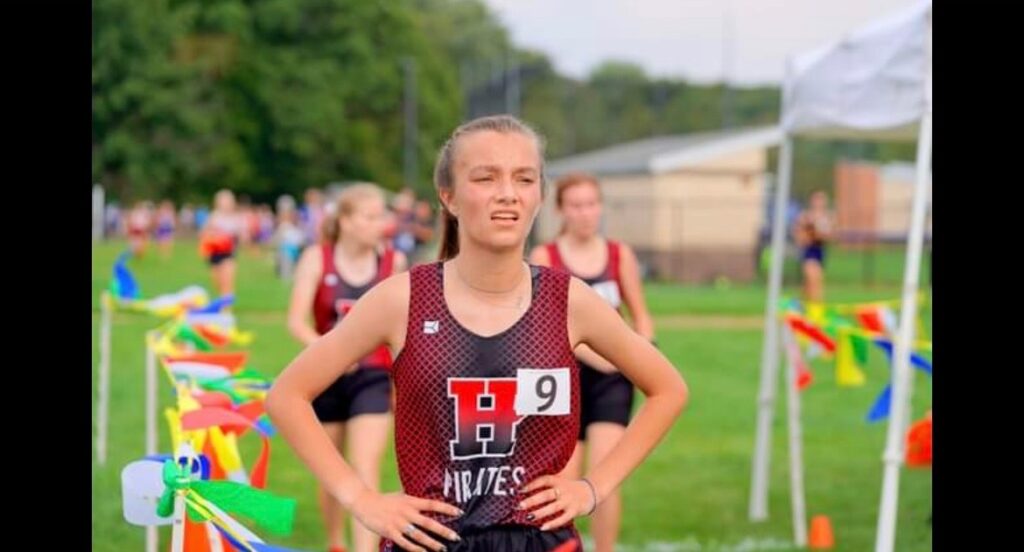 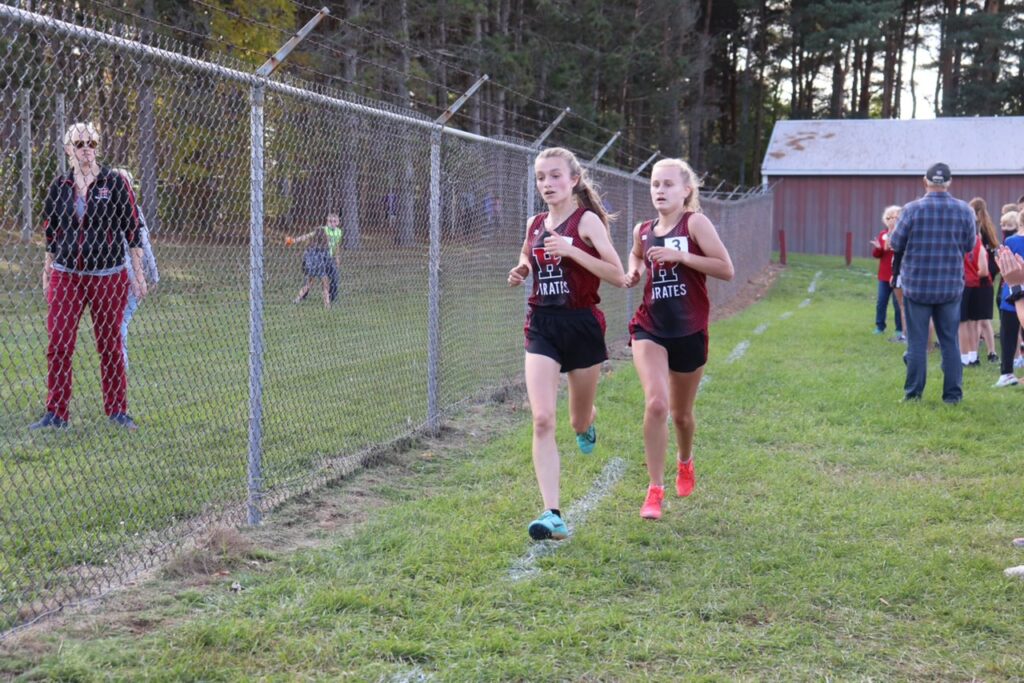 Photos by Scott DeCamp | CatchMark and other contributors

“There’s no way we could win without them and I think they both (mentioned) the importance of everybody working together, everybody running as one,” Tatro said. “That’s what we believe. We’ve got to all work together, nobody’s more important than anybody else.

“I’ve got one of the top girls in the state (sophomore Jessica Jazwinski) and certainly she’s a big factor of where our team finishes, but these gals are just as important.”

In a high school cross country meet, a team’s overall score is dependent upon how the top five finishers place. Traditionally, there are seven runners who compete for a given team and the Nos. 6 and 7 are important even if they’re not scoring among the top five because they have the ability to displace a scoring runner from an opposing team.

With a program such as Hart’s, practices and training runs can be every bit as competitive as an official race.

Races are like clockwork for this year’s Pirates team: Jazwinski and junior Alyson Enns set the pace with sophomore Lexie Beth Nienhuis typically finishing in the No. 3 position. The fourth and fifth spots typically come down to Owens and Pretty.

“With people like Alyson and Jessie, even in practices, it’s the most humbling thing I think an athlete can have, having other athletes like them around them all the time,” said Pretty, the daughter of Wayne and Samantha Pretty. “Obviously, they aren’t where they are because of luck or anything like that. You see the work they put in every day. We see them outside of running all the time but it’s always kind of like in the back of their mind.”

Tatro’s wife, Linda, is an assistant/co-coach for the Hart cross country program.

Affectionately known as “Mama Coach” and “Papa Coach” by the Pirates runners, Linda and Terry Tatro love all their runners the same. In other words, they devote as much attention to the “last” runner as they do the “first.”

“We don’t just dwell on the front pack. We’re out there on the course from one all the way through 15 on each team,” Linda Tatro said. “We’ve got runners, these guys are running to finish the race and we’ve got runners coming through two miles when these (lead) guys have already finished. They deserve the accolades and they deserve the same recognition and the same applause as they’re going through because actually they’re working just as hard … .”

“If not harder,” Terry Tatro interjected.

According to Linda Tatro, Owens and Abby Pretty are two of the biggest encouragers on the team. But make no mistake: They’re both looking to excel and want to win.

Pretty, who carries a 4.05 grade-point average, plans to attend University of Michigan and study neurology. Owens, whose GPA is in the 3.4 range, is considering attending Wisconsin-River Falls for its equine program or enlisting in the military like her older siblings.

“They’re super fun. They just make it a fun atmosphere,” Alyson Enns said about Owens and Pretty. “Just positive and especially, like, when we get to state, it’s super fun to have all seven girls together. They all just make it really fun.”

Owens and Pretty also run track for a Hart team coming off a Division 3 state championship, while Owens plays basketball as well for the Pirates’ highly successful program.

As much as Owens and Pretty would love to cross that finish line first some time, they’re focused on the team concept.

“I feel like there’s not really a downside to it because no matter if you’re the fastest or slowest runner, we’re always just a really big team. We always try and push each other,” said Owens, the daughter of Steve and Tonya Owens. “And, yes, it does suck sometimes (when you can’t say), ‘Oh, my gosh, I get to cross the finish line first,’ but you’re still so proud of Jessie, Alyson, Lexie. You’re so proud of all of them. It’s just motivating honestly, ‘I can see Lexie (ahead of me). Maybe if I just keep going, I’ll be with her.’”

Said Pretty: “I spent a lot of time with Jessie over the summer at her house doing little, like, training stuff with her parents and they put in the work for something like that. And when you watch people with work ethics like that on your team, you can feel proud but you never get prideful because there’s always someone doing more and someone is right with me all the time. We can’t slack, ever, no matter what. No excuses.”

Ravenna’s Hunter Hogan: 5-sport athlete, ‘Swiss Army knife’ and fierce competitor with a kind side
Nate Bolley’s heart is in Whitehall and the Vikings love their dynamic ‘gunslinger’