Three-sport standout chooses to live with ‘Aunt’ Niezurawki’s family, including two of his football teammates.

WHITEHALL – When Whitehall football teammates Nate Bolley, Chase Niezurawski and Jamar Hill are hanging out together, Vikings head coach Tony Sigmon cannot help but think of an “Alvin and the Chipmunks” episode.

“Maybe that’s the best way to describe it. I look at my own life and I’ve got two (young sons) at home and I’m like, ‘Holy smokes,’” Sigmon said with a smile.

Stephanie Niezurawski and her husband, Jason, house those three young men and there’s never a dull moment. In her mind, there’s no question who plays the role of Alvin.

“It’s Nate!” she said in laughter.

Much like Alvin Seville, Nate Bolley is the oldest of the three, he’s the leader of the band, he’s fearless and maybe the most mischievous. But, to his core, he loves his brothers and he’ll protect them.

Biologically, they’re not brothers, but they share that bond. Technically, Stephanie Niezurawski is not Bolley’s “aunt” – they’re second cousins – but the dynamic is there.

“I love that kid a lot – a lot. I love him just like he’s my own kid. Honestly, I don’t look at it any other way,” Stephanie Niezurawski said.

Whitehall loves having Bolley, too. The 18-year-old senior is a dynamic three-sport athlete with a big heart.

On the football field for the unbeaten, Division 4 second-ranked Vikings (6-0), Bolley is what Sigmon calls a “gunslinger.” He’s one to throw caution to the wind and just go for it.

The 6-foot, 170-pounder is a game-breaker just about anywhere. He’s all over the field: At slot, cornerback, return man and punter. Bolley has emerged as a leader in this, his last-hurrah football season at Whitehall.

But as playful as the “Alvin” comparisons may be, growing up has not been easy for Bolley. Through his experiences and the decisions made by others or made by himself, he’s been forced to mature. Stephanie Niezurawski points out that Bolley has taken ownership of his situation.

Bolley lived in Montague initially but then moved to Whitehall in fourth grade. Growing up, he spent a lot of time with the Niezurawskis. For half of his sixth-grade year, he lived with them.

Following sixth grade, Bolley moved to Missouri with his mother and stepfather, the latter of whom joined the military. It wasn’t the life Bolley wanted, however, and he missed living in Whitehall with the Niezurawskis.

Bolley returned to Whitehall during his freshman year and he moved back in with the Niezurawskis. According to Bolley, he and his immediate family did not see eye-to-eye on things and they grew apart. His immediate family still lives in Missouri and he chooses not to communicate with them.

“I never really wanted to originally leave Whitehall because Whitehall felt like home. I’m a big home guy – I love family, I love being around everybody. I don’t really care for change. I like keeping things the same, keeping it simple,” Bolley said.

“I’ve been really mentally with the Niezurawskis since I moved in with them. People don’t know this, but my last Lil’ Vikes year, my sixth-grade year, I didn’t stay with my parents. My parents were already in Missouri and my aunt let me live with her for my last Lil’ Vikes season. Ever since then, I was like, ‘Man, this feels like home.’ They showed me what it’s like to be a kid.”

Stephanie Niezurawski said she knows Bolley is loved by his mother, but Niezurawski supports his decision to stay with her family as he’s exhibited so much growth.

At the urging of Whitehall football players Jaiden Altgilbers and Kyle Stratton, Bolley and many of their teammates joined a youth group at Evangelical Covenant Church. Bolley admits that has helped him, too.

Whitehall’s football team seems to possess good chemistry. Certainly, there is a wide range of personalities on the roster, but they all fit together.

Bolley is still that aforementioned gunslinger, even though he hasn’t had to reach into his “Bolley Bag” of tricks or “Crazy Bag,” as he describes it, so far this season.

During his sophomore season on the varsity team two years ago, Bolley made one of those “crazy,” memorable plays. Trailing at Montague early in the second quarter, Whitehall faced fourth-and-6 from its own 23. A fake punt was not called, but Bolley decided on his own to try to make something happen.

Boy, did he ever. Bolley weaved through defenders, broke a tackle or two, got to the sideline and he was gone. Seventy-seven yards and a PAT later, the game was tied at 7. Montague won that instant-classic contest, 34-31 in double-overtime, en route to capturing the Division 6 state championship, but the Bolley legend was born on a play reminiscent of a White Lake Youth Sports Club game.

“For him, I think it’s something to where the game just goes slower for him,” Sigmon said. “Sometimes things are just easier for other kids. I think he falls into that category. The vision part is probably the best way to describe it. He’s got great vision and he’s able to anticipate and see things before they actually (happen).

“And, you know, he watches his film – he does his homework and everything – but I think there’s that part of it where for him it’s very intuitive and he makes it happen.” 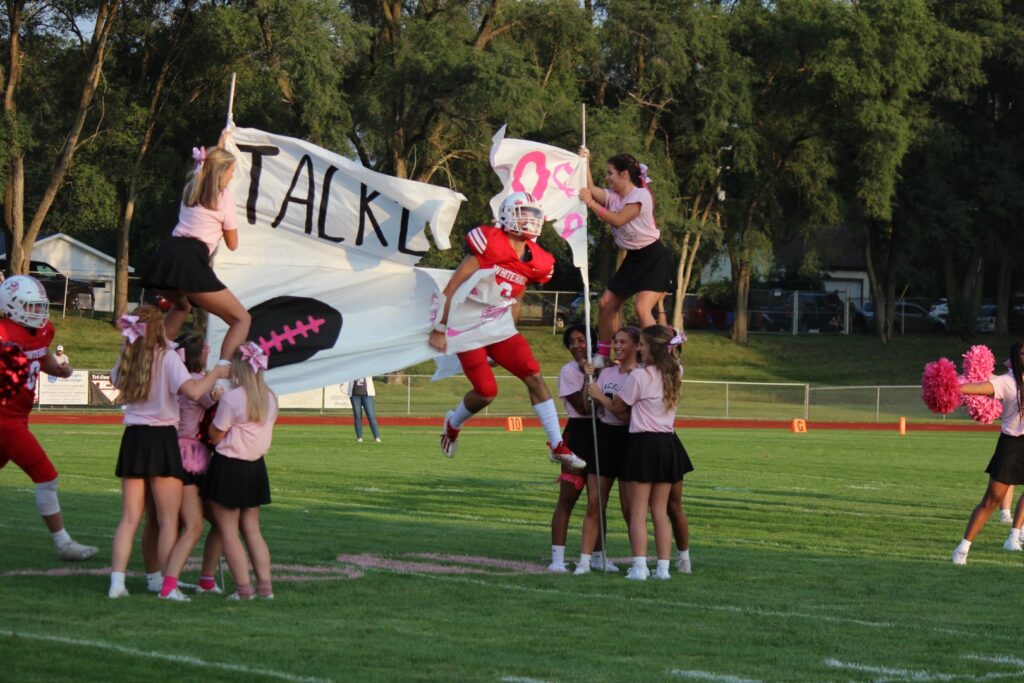 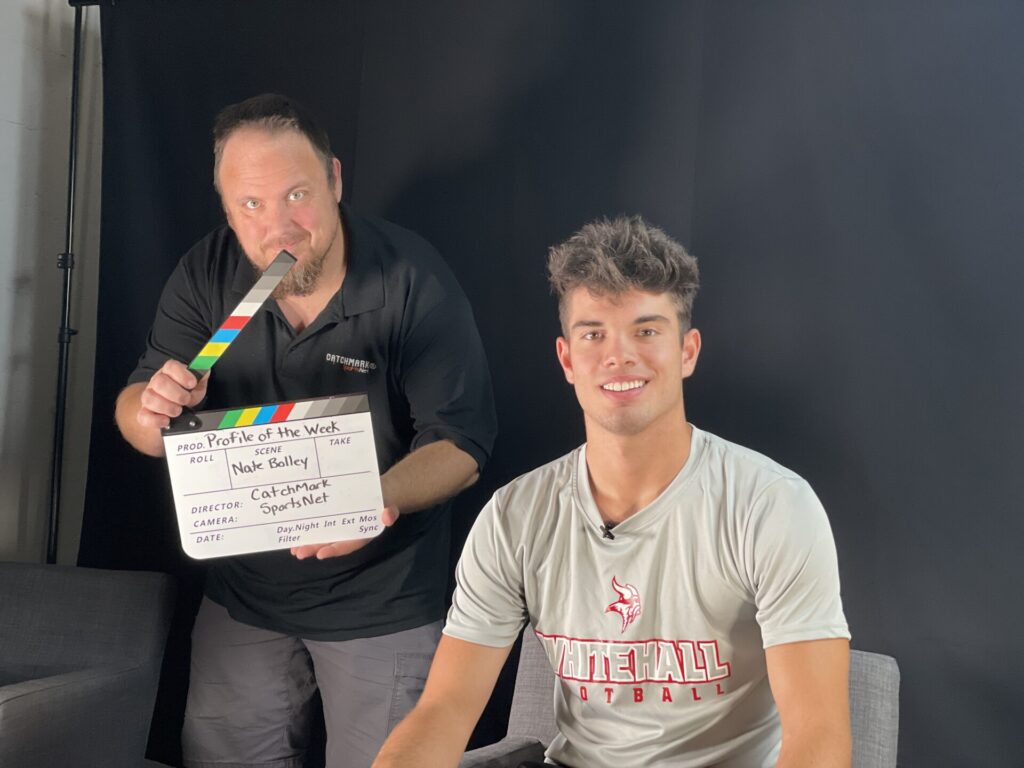 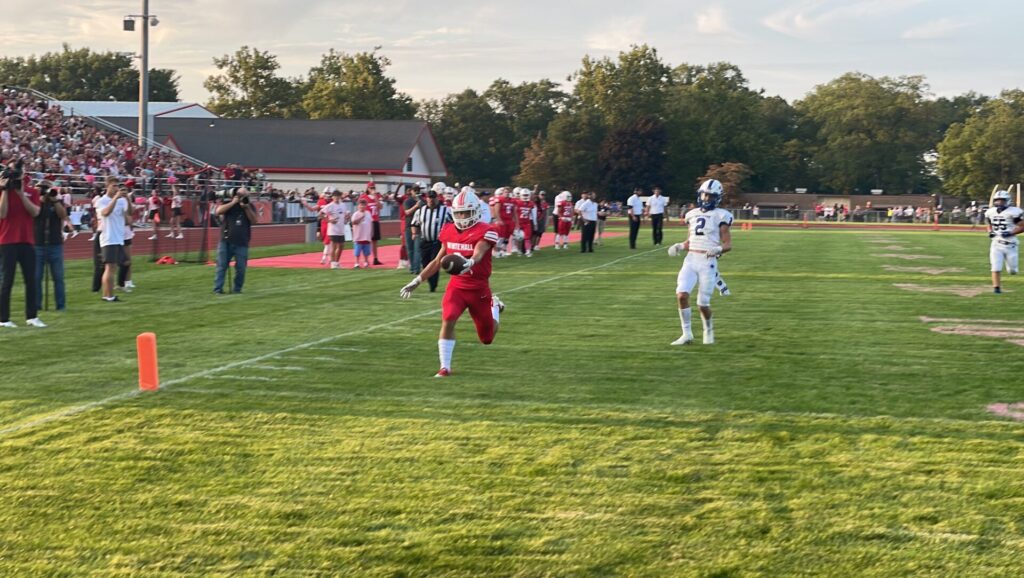 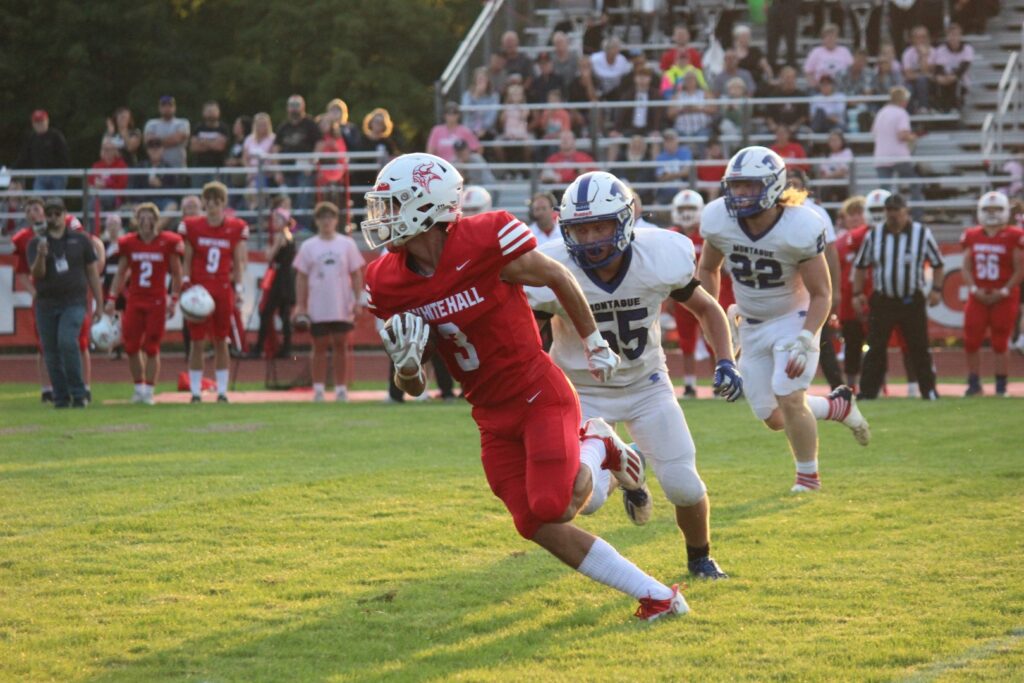 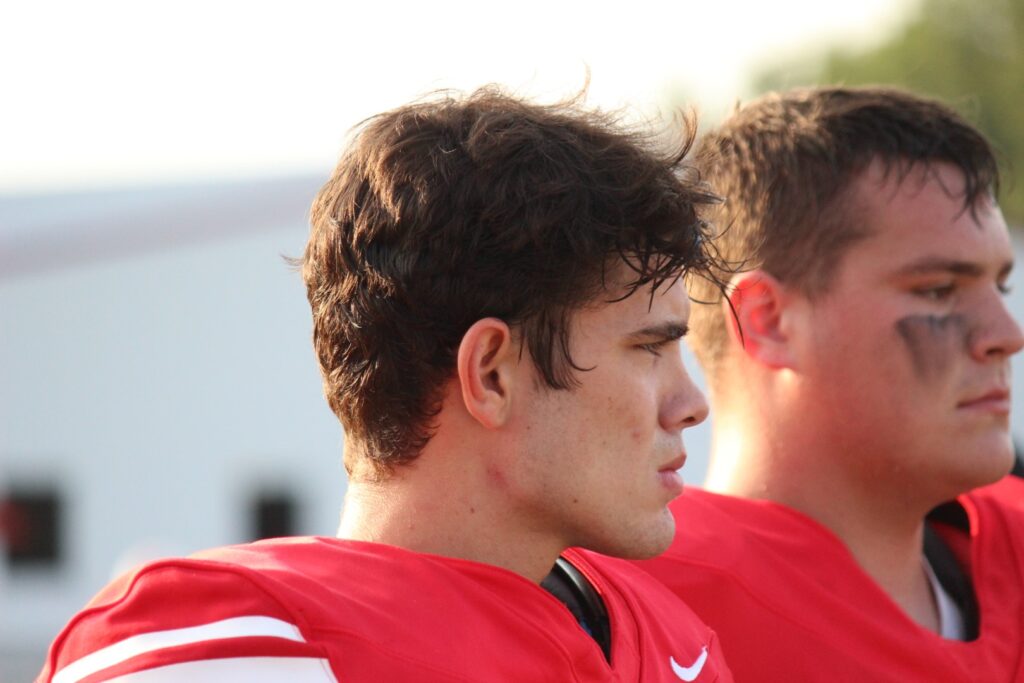 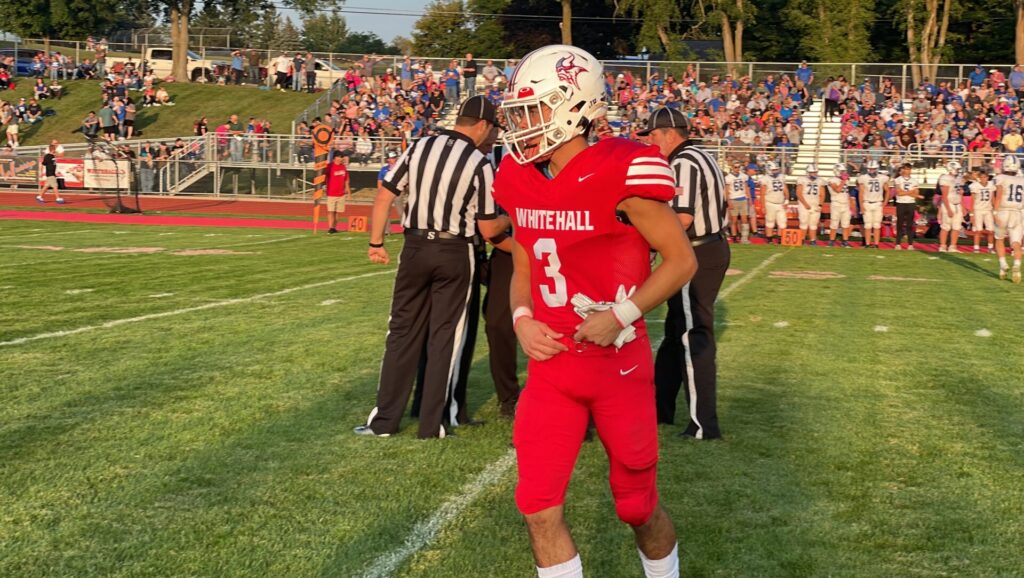 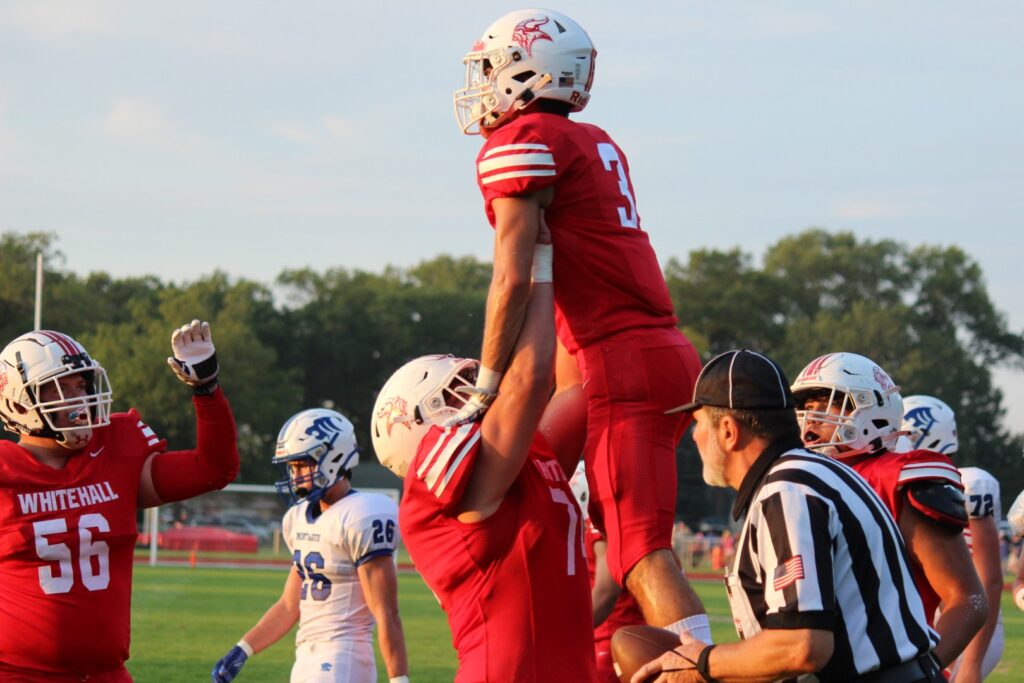 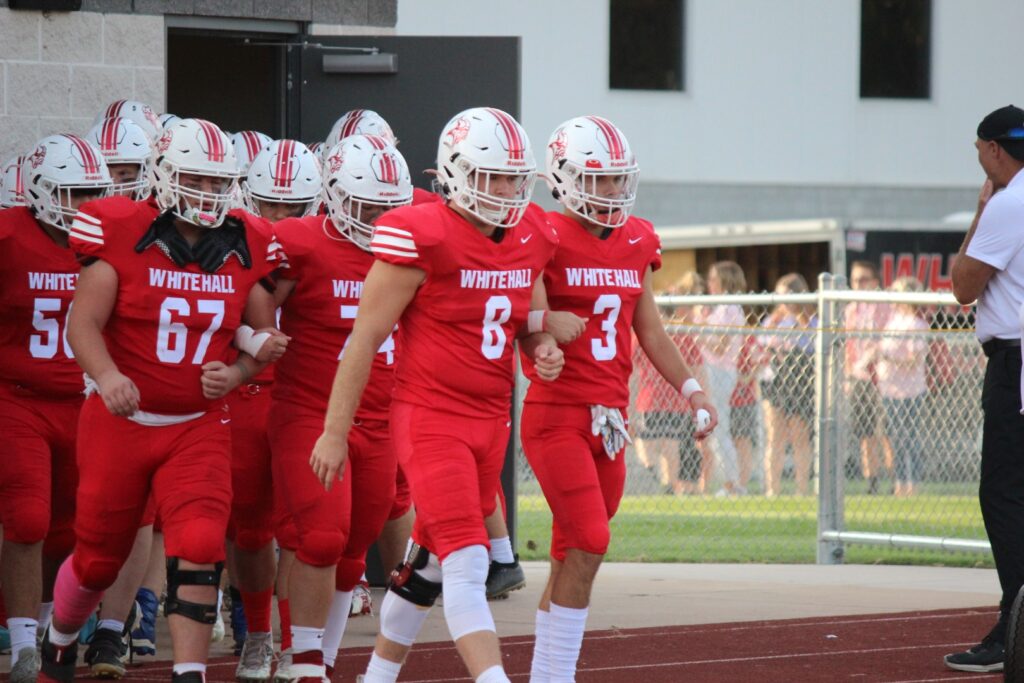 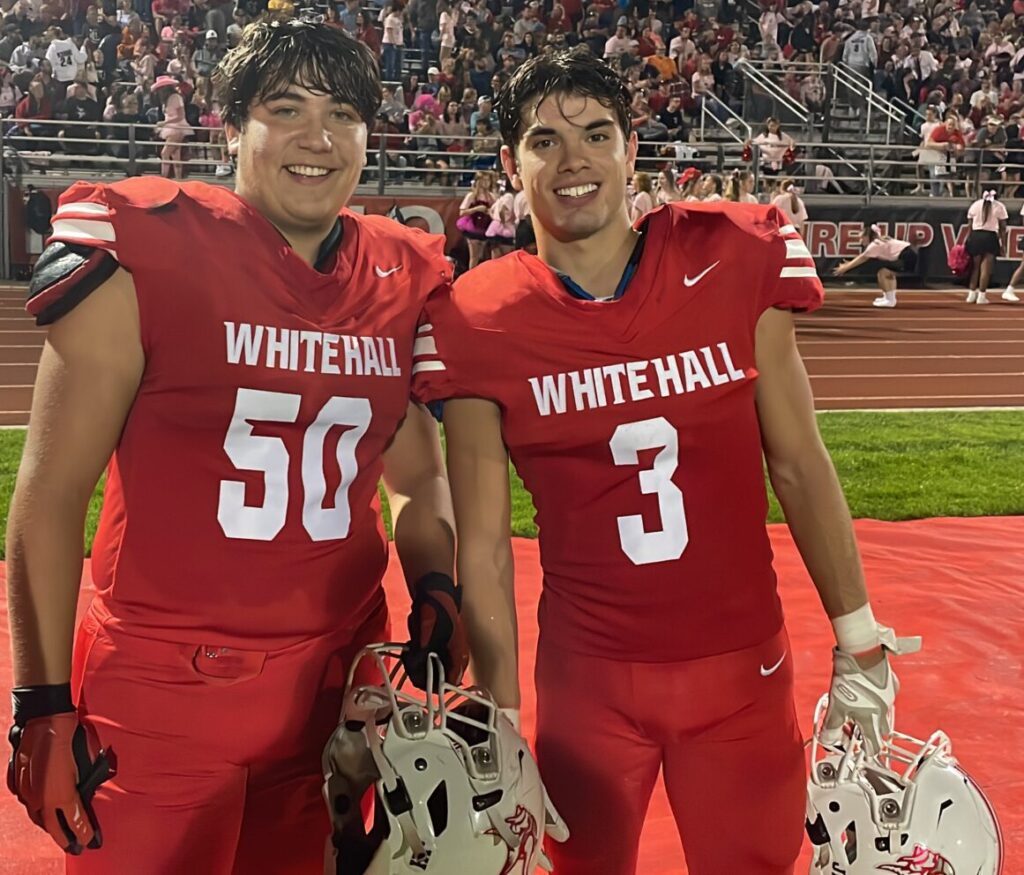 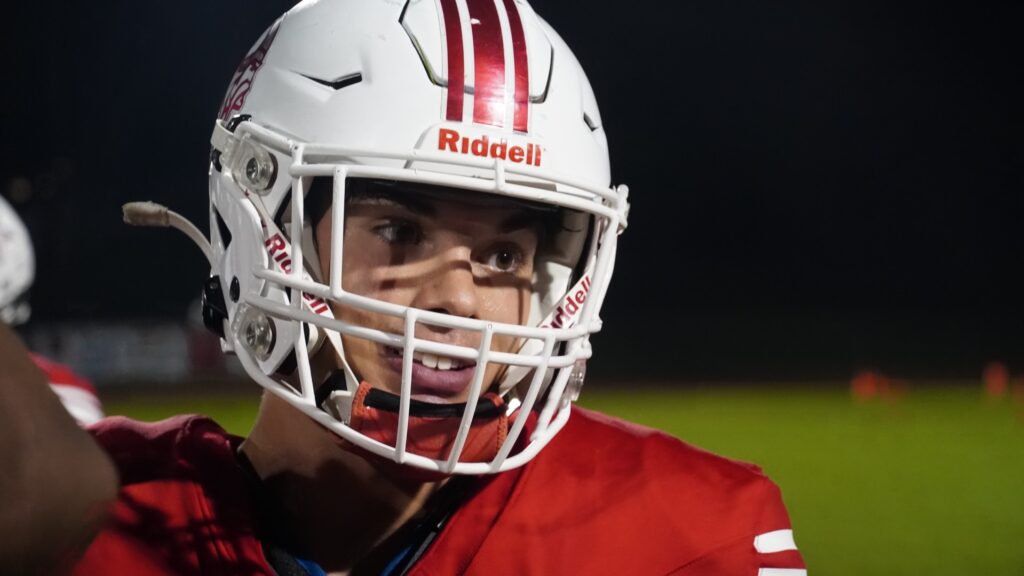 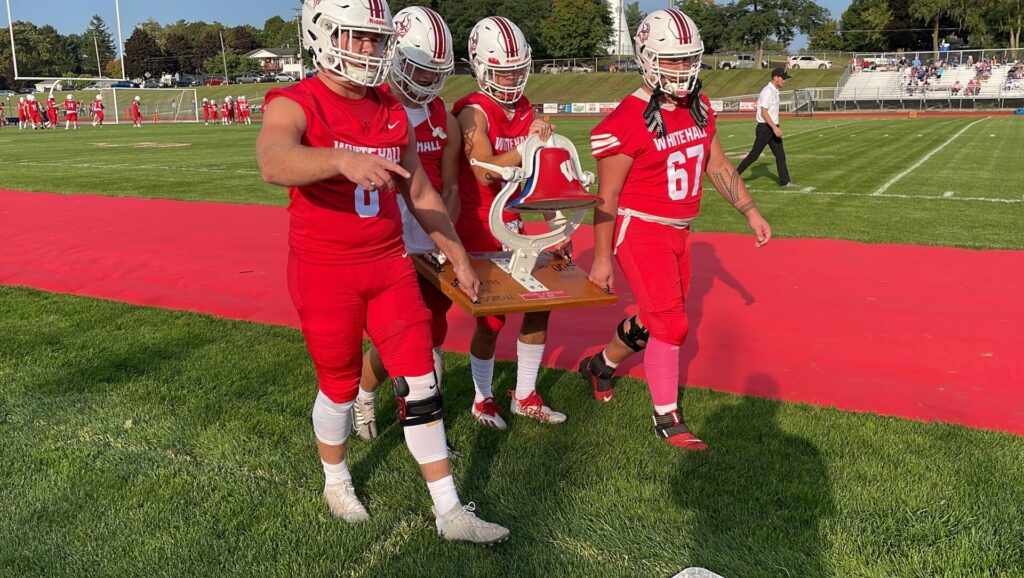 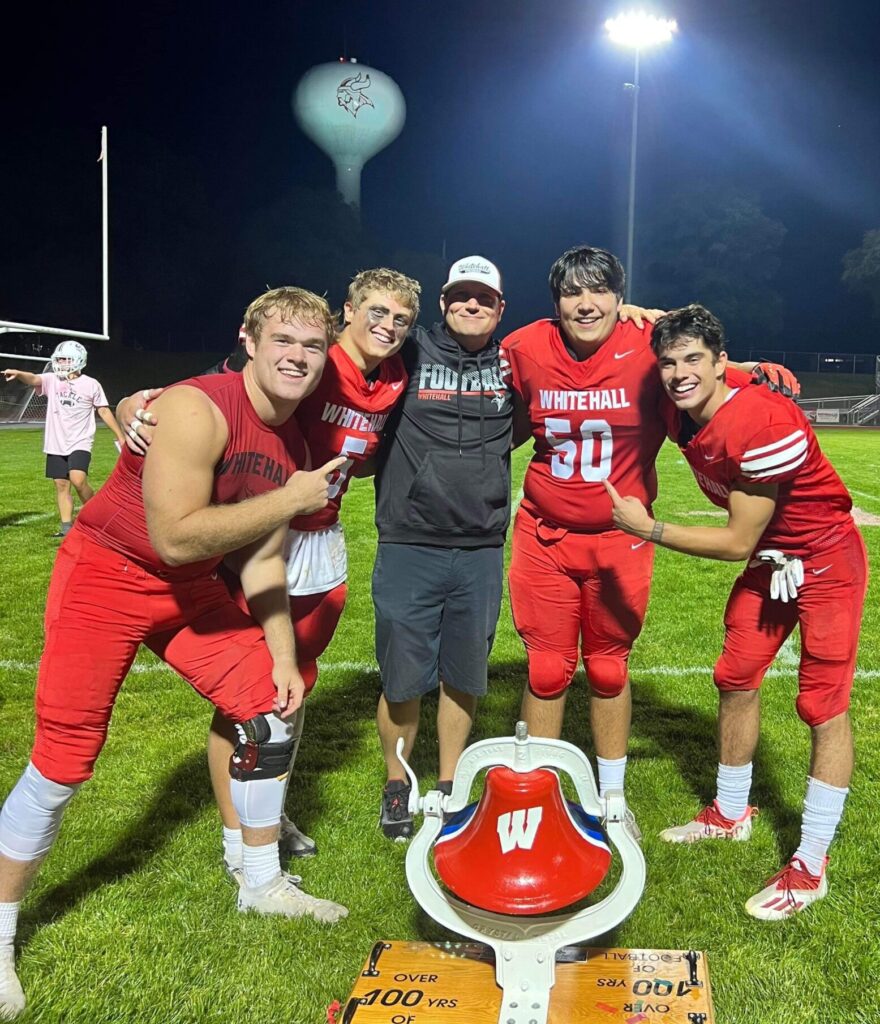 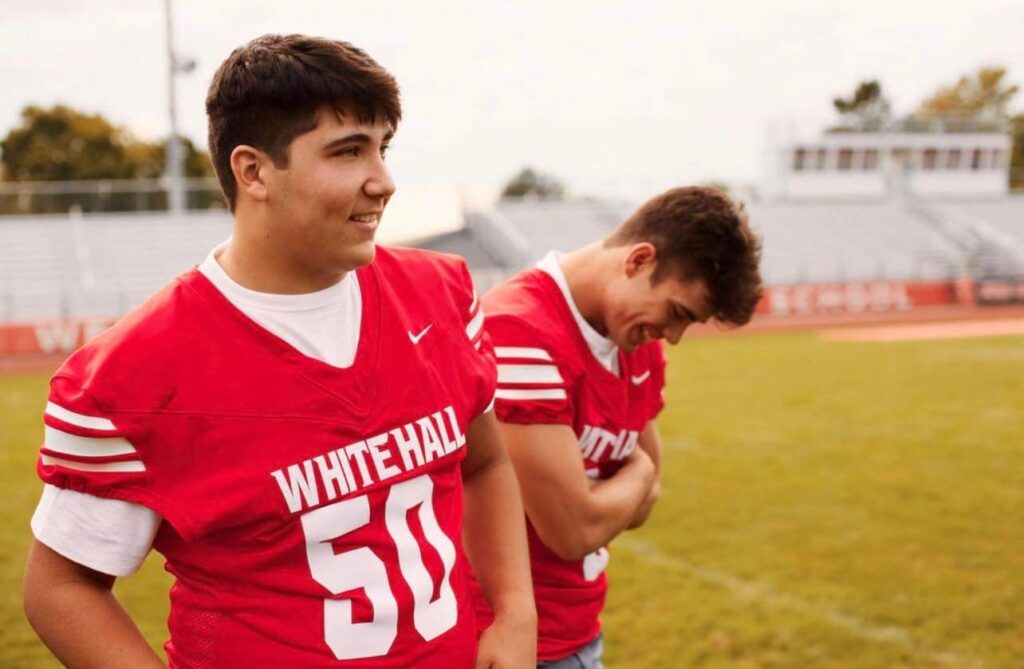 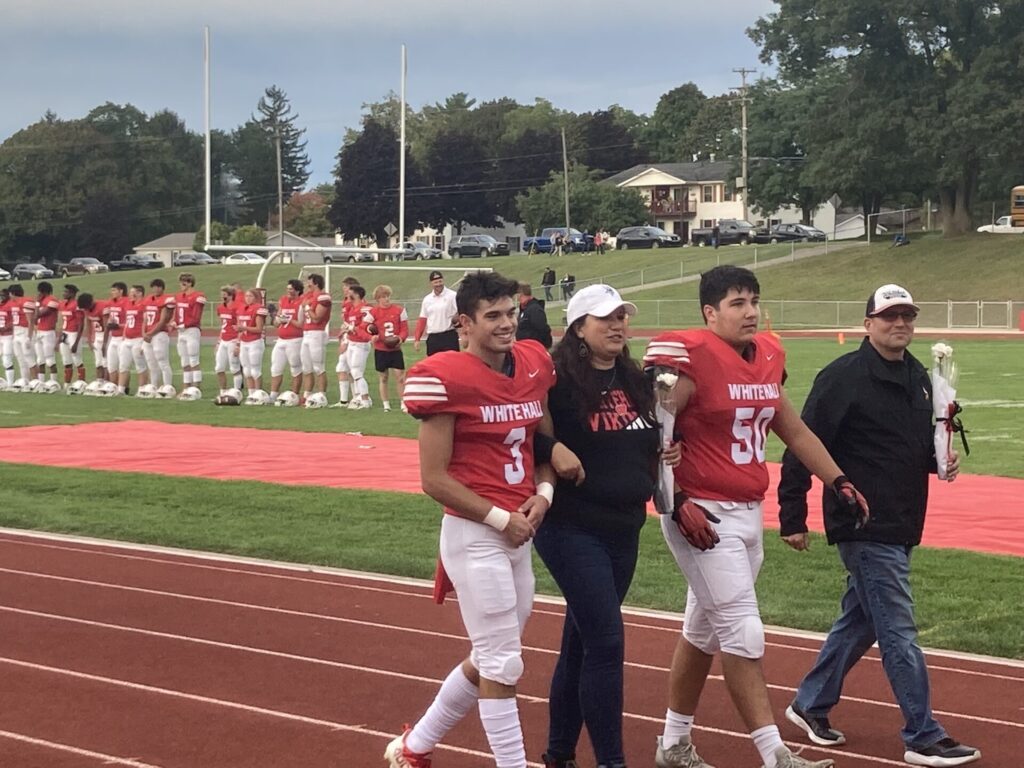 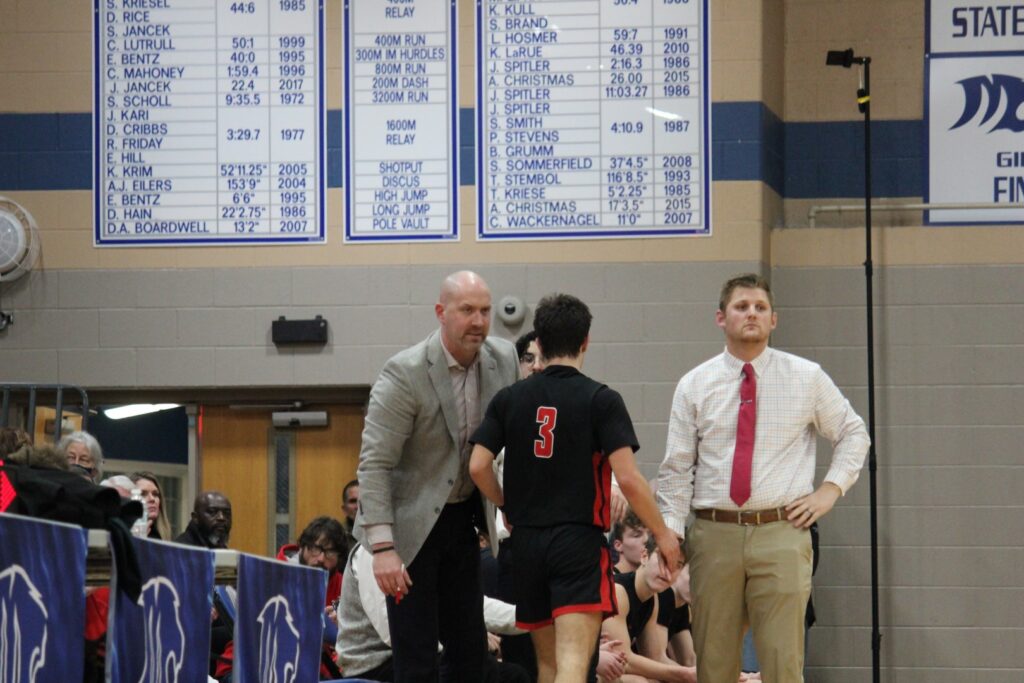 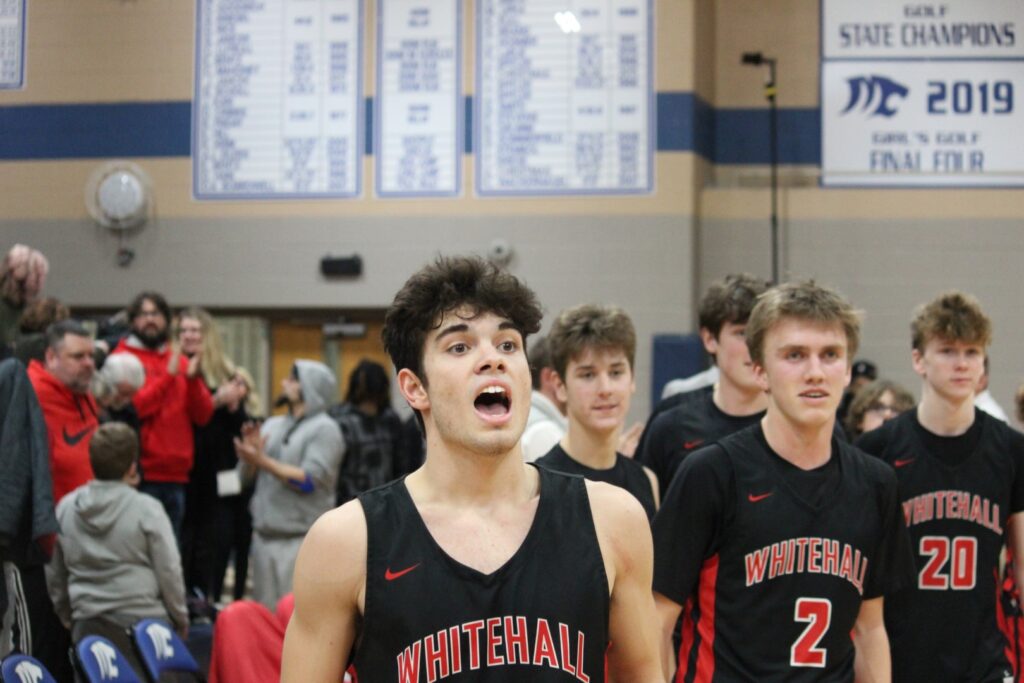 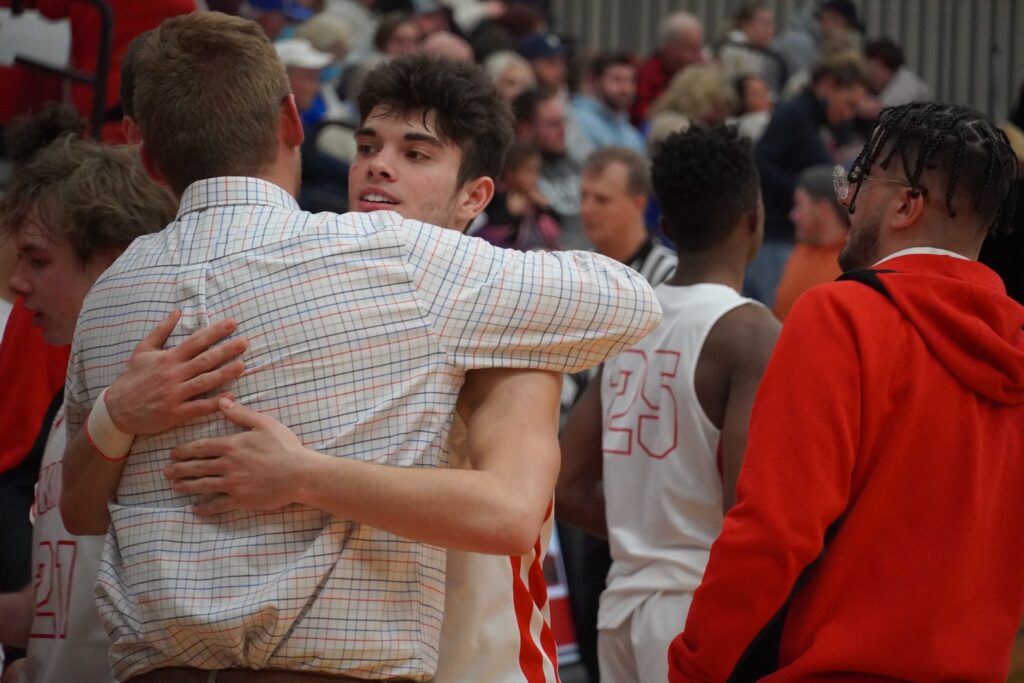 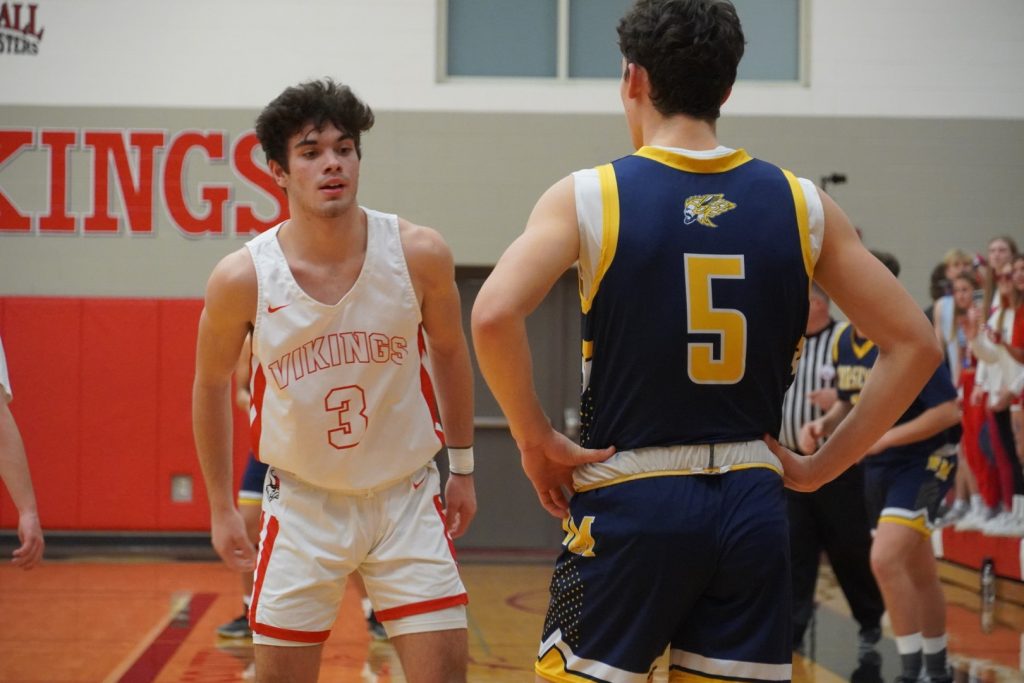 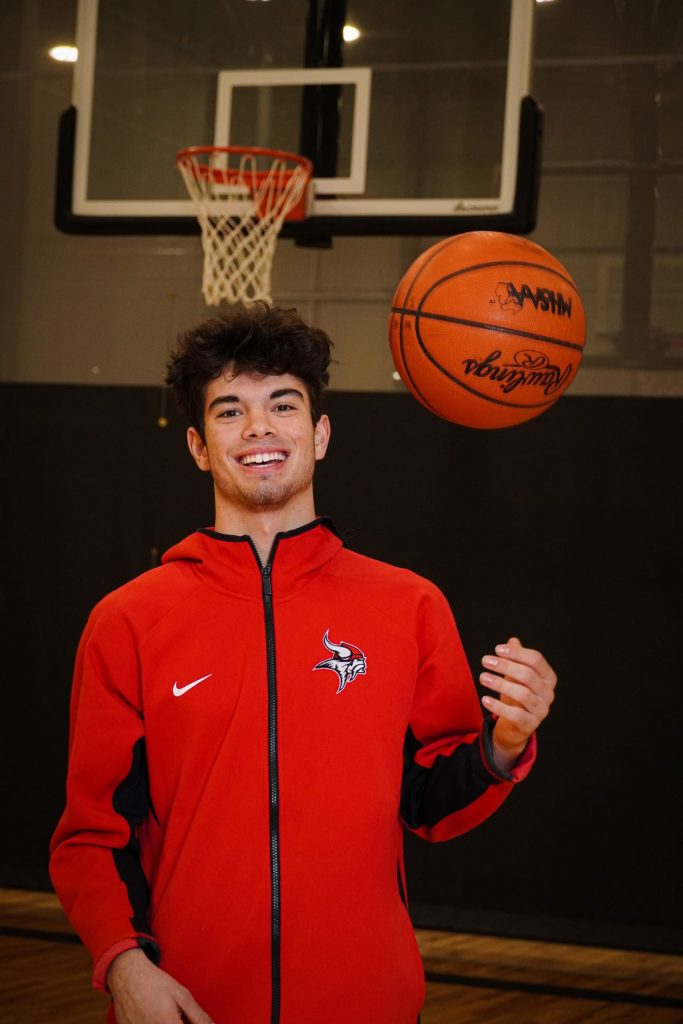 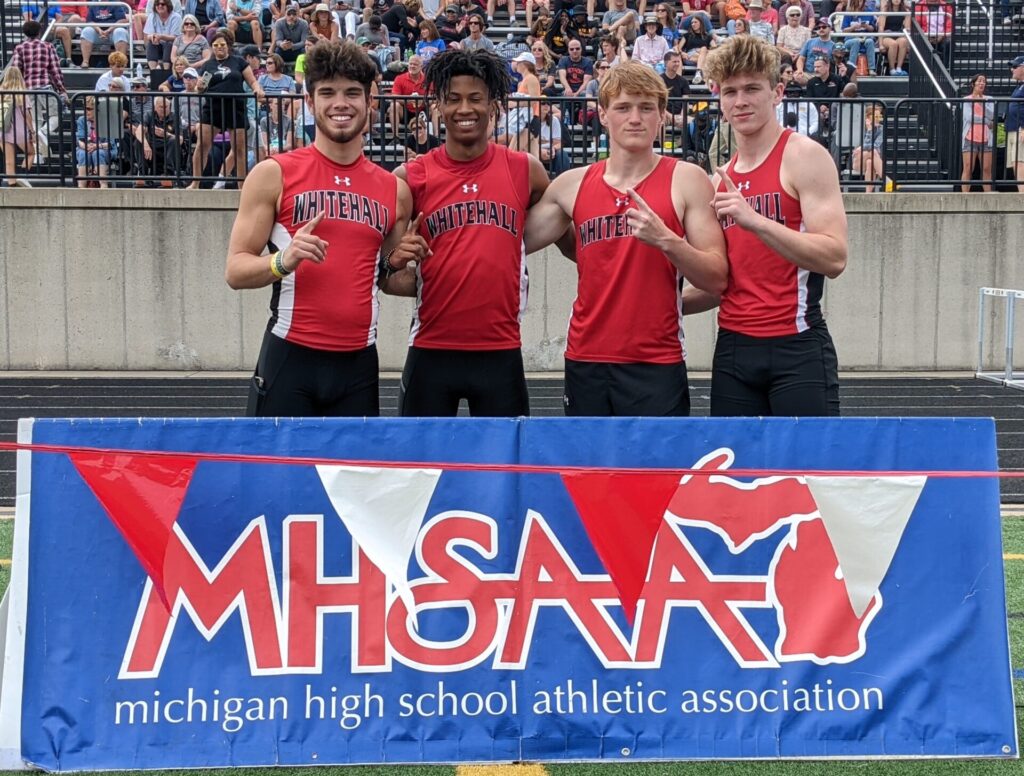 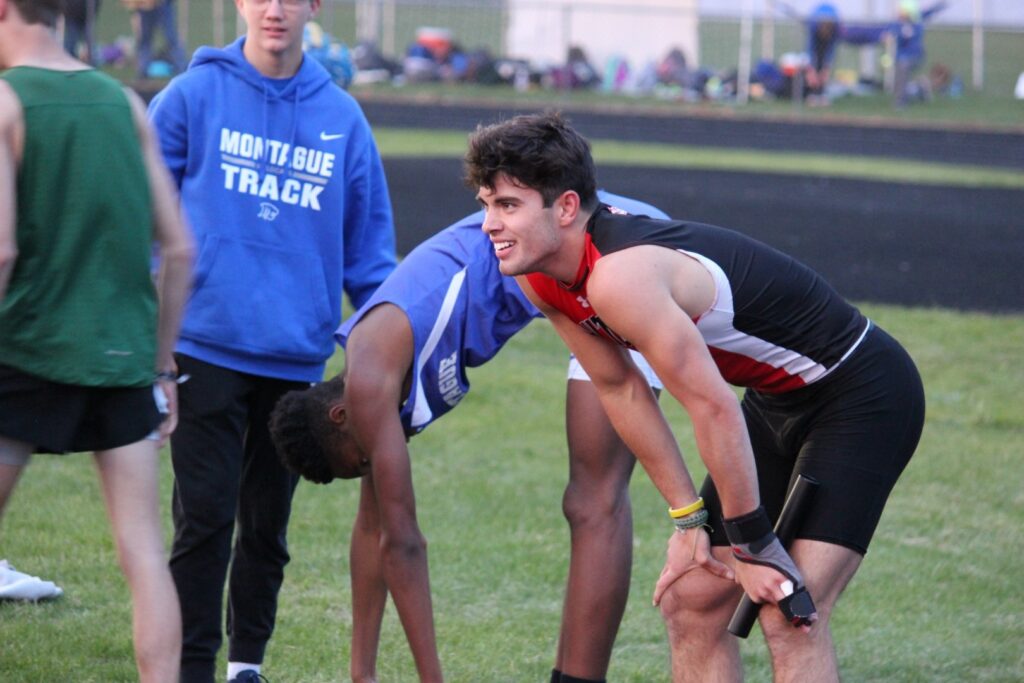 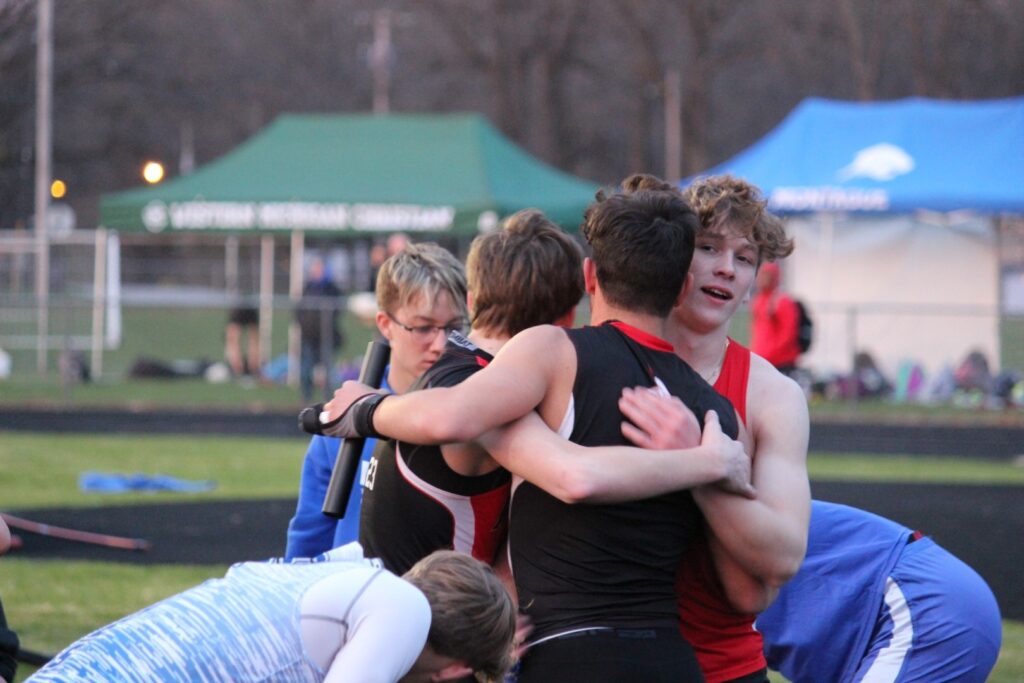 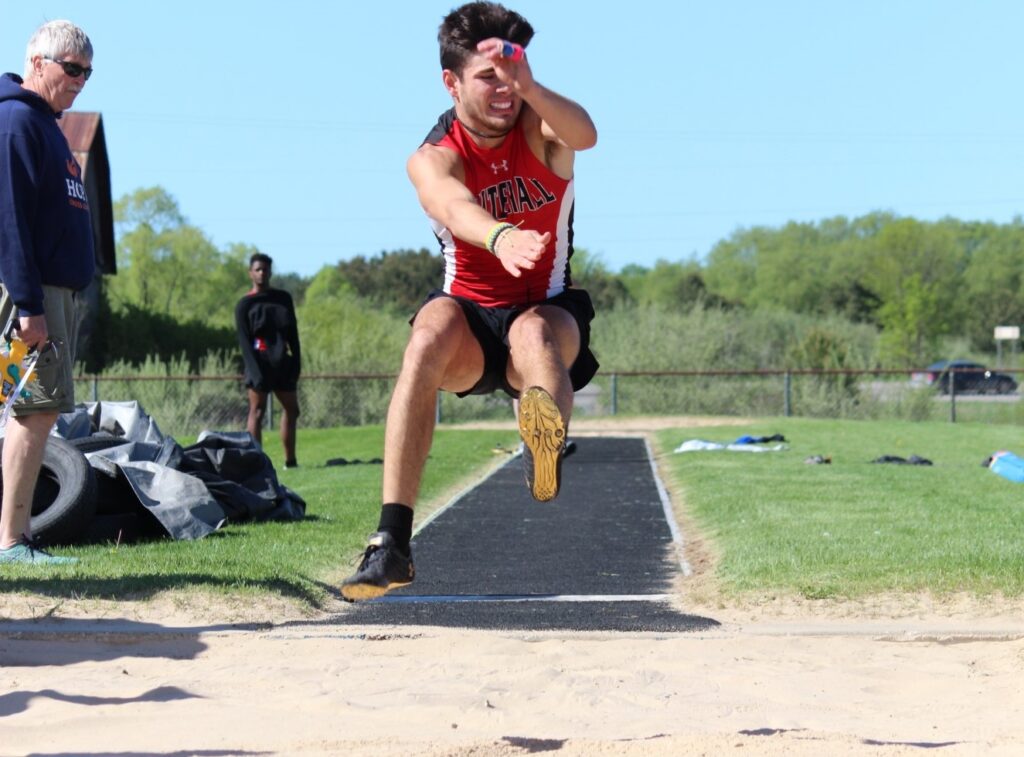 Photos by CatchMark and other contributed sources

This fall, Whitehall’s football team features a number of playmakers and the Vikings spread the wealth, so to speak. Bolley doesn’t have to do it all, but his touchdowns-per-touches ratio is still pretty astounding. He has converted his 13 receptions into five touchdowns and 244 yards, and his 21 carries into two scores and 190 yards.

Defensively, he has snagged a team-high three interceptions.

“Man, he’s electrifying. Like, I’ll be turned around getting a drink of water and next thing I know it’s a jet (play) and you just see him down in the end zone. It’s just like, ‘That’s crazy.’ He does everything, too. I don’t know how he has the energy,” said Jamar Hill, Bolley’s 15-year-old “younger brother,” who moved in with Niezurawskis over the summer.

As a 5-10, 245-pound junior defensive lineman, Hill is a wrecking ball. Sigmon calls him a “bull in a China shop.”

Chase Niezurawski, Bolley’s 17-year-old “younger brother,” is a 6-1, 235-pound senior offensive lineman. Sigmon considers him the “most level-headed” in the “Chipmunks” group.

Like Hill, Chase Niezurawski marvels at Bolley’s ability. In basketball, Bolley is the defensive stopper and energy guy for a Whitehall team that captured conference and district titles last season. In track and field, he was a member of the Vikings’ state champion 4×200-meter relay team.

“He has the ability to do whatever he wants, if he wants it (on the field),” Chase Niezurawski said.

“He’s a kind, caring dude. High energy. When he’s determined at something, he’ll do it. He’s always taking care of people, not just himself.”

Like his Whitehall football teammates, Bolley feels a sense of urgency this season. He feels it in his senior year overall as he braces for the real world that’s fast approaching. Accordingly, his grades have been on the rise.

Bolley acknowledges he’s far from perfect, that he’s still a work in progress. Stephanie Niezurawski wants people to know that no matter what, Bolley is “an amazing, loving kid.”

He’s a protector and “great big brother” for Lexi Niezurawski. He credits “Aunt Niezurawski” for staying on his tail when he messes up.

To Bolley, Whitehall is home and he wants to leave his mark.

“We want it all. We want everything. We want to win everything, we don’t want to lose,” Bolley said about his football team. “We want to get a ring on our finger. We want to win conference, the districts, region, everything. The sense of urgency is big, we want it bad and I don’t think we’re going to stop until we have to stop.”

‘No way we could win without them:’ Senior runners provide key depth for Hart juggernaut
Ludington golfer Emma McKinley continues to thrive in competitive environments