How the “Battle for the Bell” started and continues as one of the top rivalries in the country.

There is a place on the shores of Lake Michigan where two towns exist, separated physically by a body of water but emotionally by the Grand Canyon.

To the traveler, these two towns are the same, and one would hardly be able to tell when he left Montague and entered Whitehall. To those raised here, the divide is crystal clear and rivalry as fierce as the day it began.

History is a fickle thing. Events of the past fade away like photographs bleached by time. You know what happened, but the picture, the image, isn’t as clear as it once was — in some cases fading into nothing, and being lost to time forever.

One thing we know for sure is that football began in the White Lake area around 1900, and almost immediately, the competing towns of Montague and Whitehall took their battles to the field.

The first official game in the series was played in 1921, but the rivalry is actually much older.

An article printed in the Whitehall Forum dated Dec. 1, 1901, reported, “On Thanksgiving day a goodly crowd of football enthusiasts accompanied our team to Montague where they played a game with the Montague boys on the grounds near the High School. The game was an exciting one and the rivalry existing between the two towns was distinctly manifest on the field and in the game it was at its height.”

The article continues, “Both teams were about evenly matched in size and weight and the game proved them both well skilled in the tricks of the game.”

The game ended in a 0-0 tie after a fumble and recovery was disputed, a fight broke out, and both teams quit with 15 minutes left in regulation. Over the next 120 years, the rivals have crossed White River to face on another. 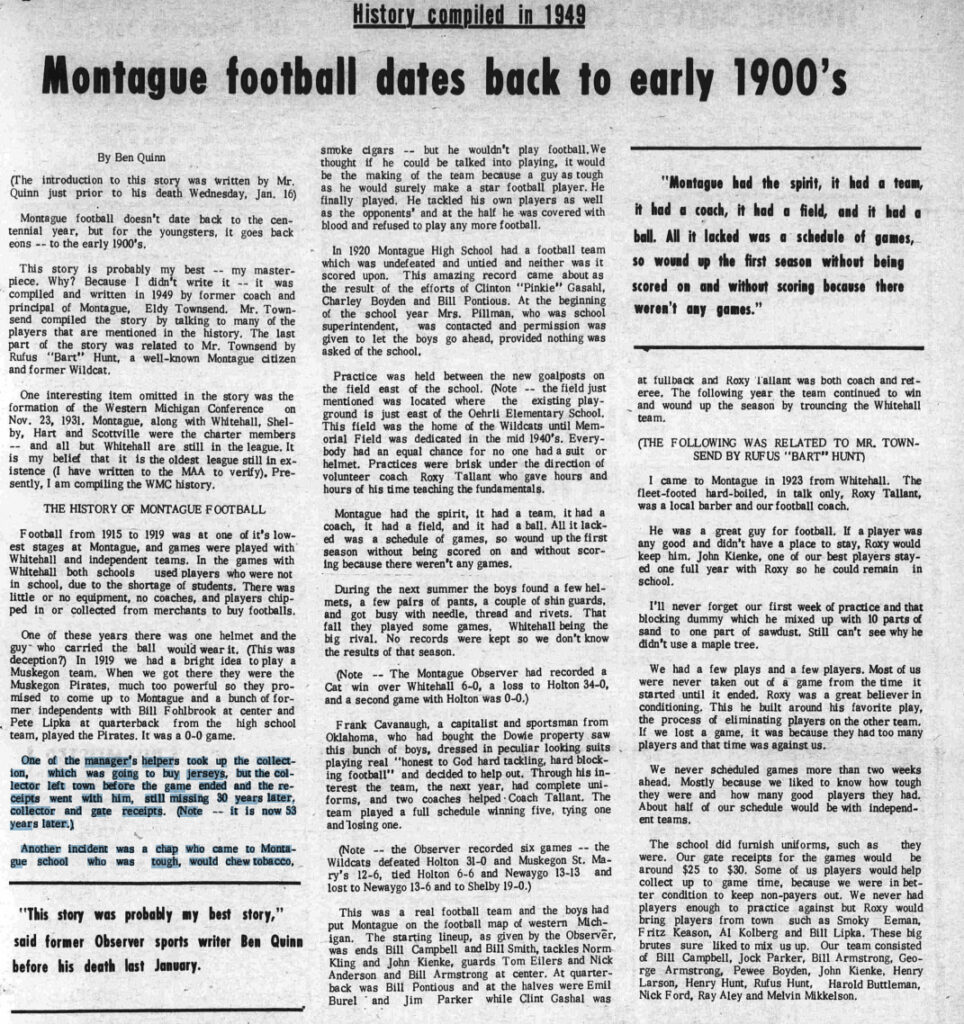 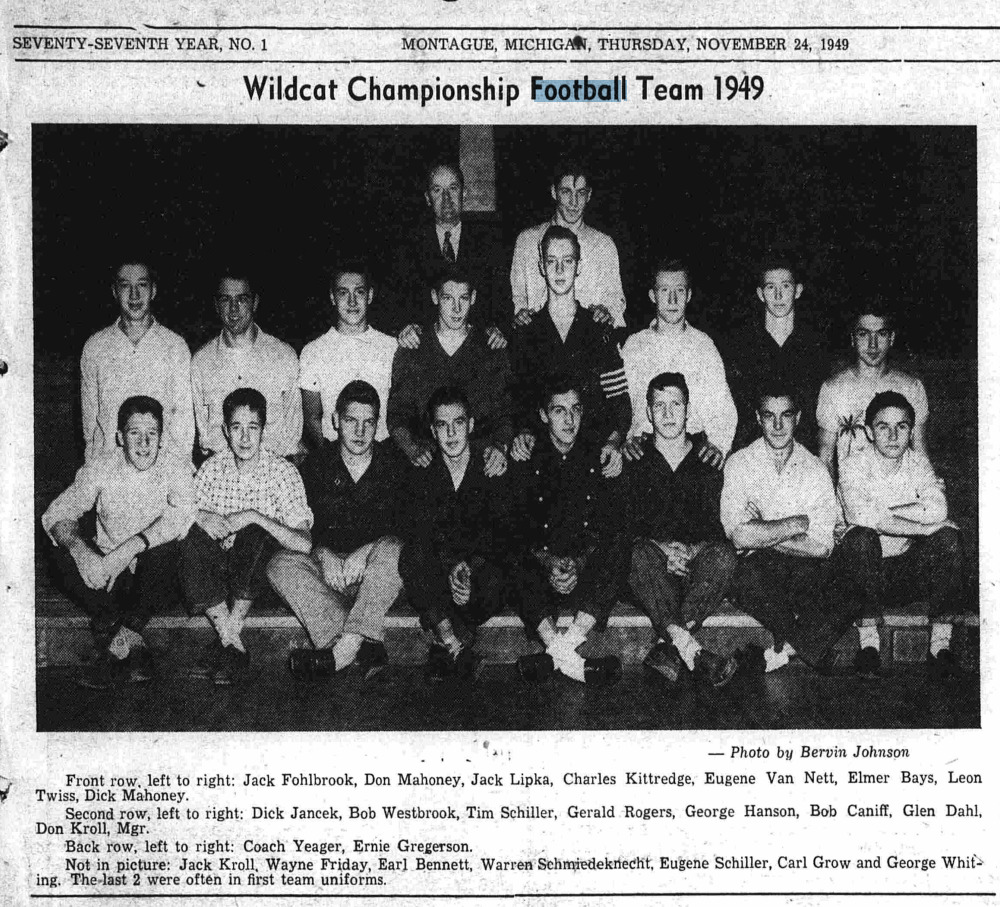 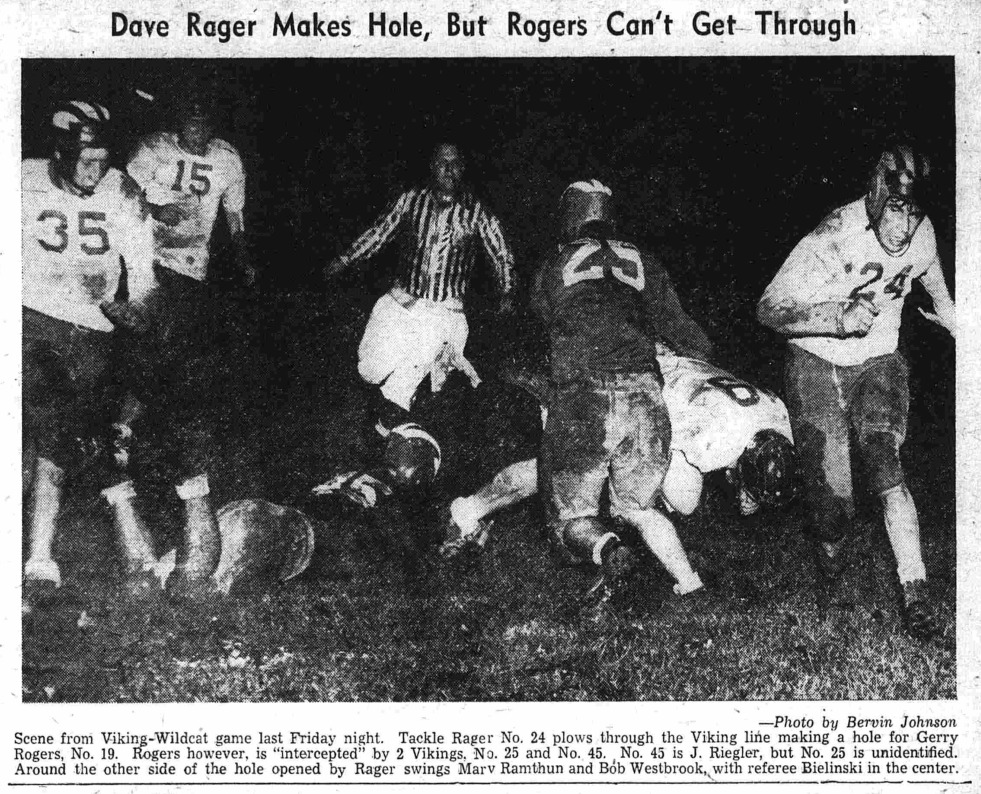 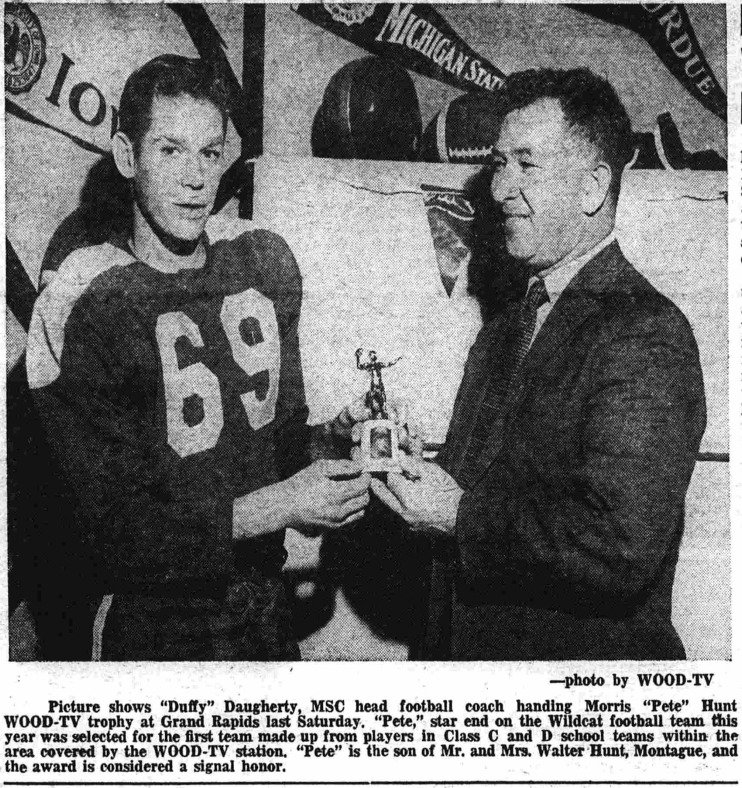 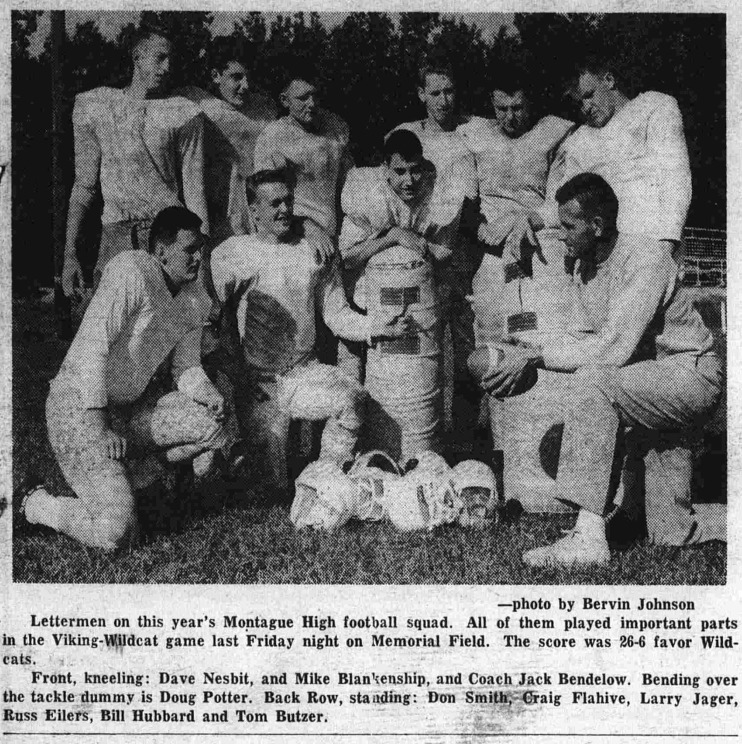 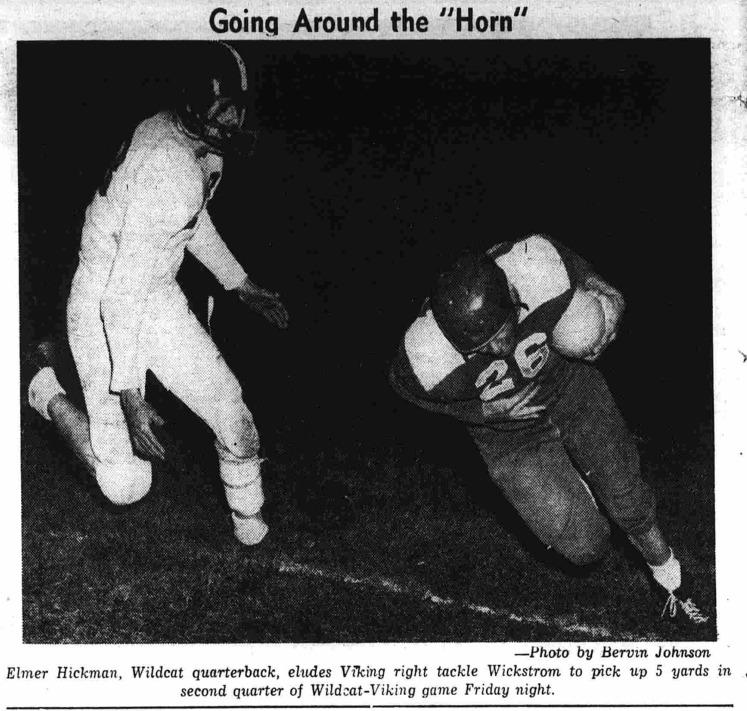 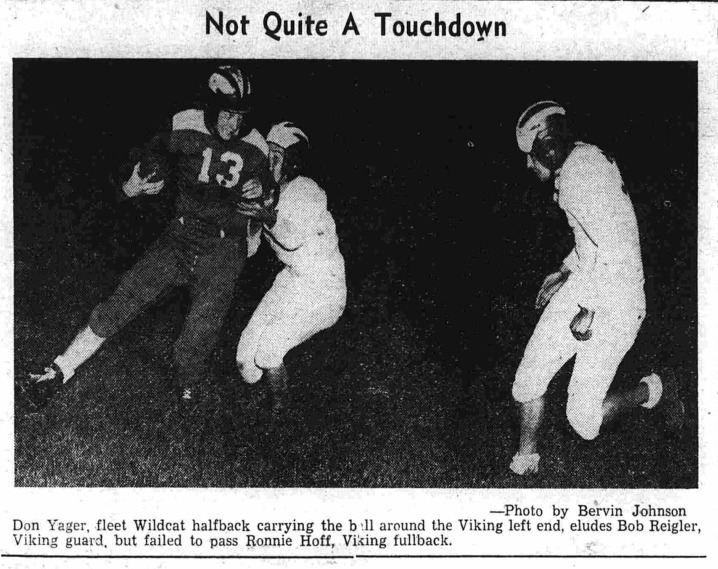 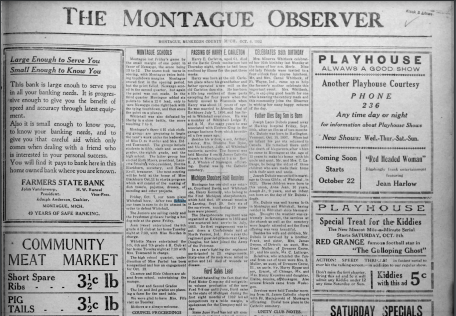 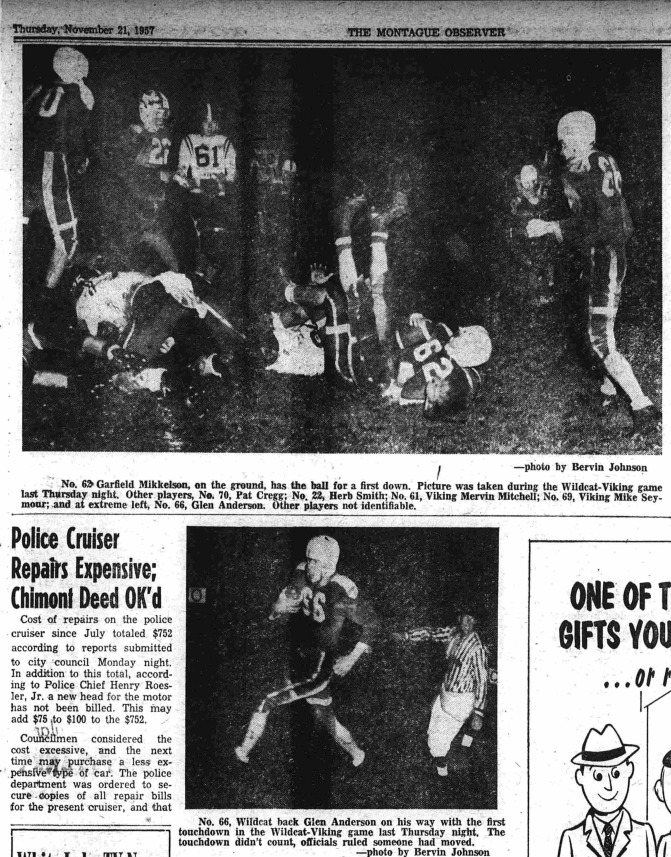 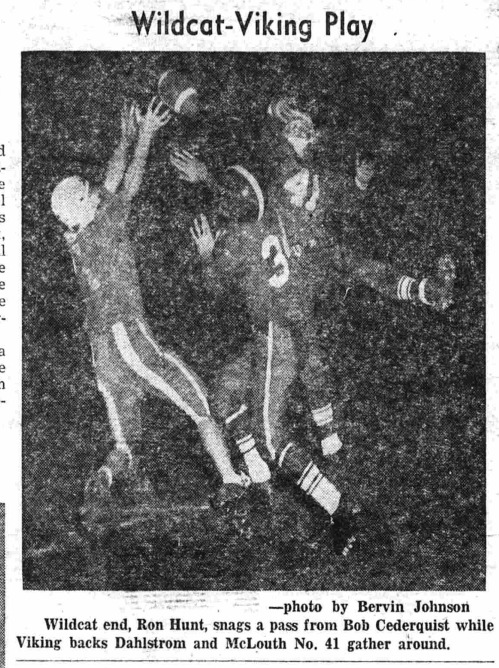 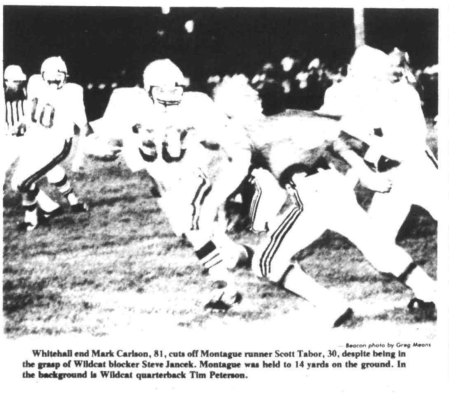 Football looked drastically different in those times, Ben Quinn in his 1949 historical article stated, “Football from 1915 to 1919 was at one of its lowest stages. In the games with Whitehall both schools used players who were not in school, due to a shortage of students. One of those years there was one helmet, and the guy who carried the ball would wear it.”

Things changed quickly: Uniforms were purchased, goal posts erected and coaches hired. Football in the White Lake area began to slowly transform into something that resembles the game today. One thing always remained the same: The heated rivalry between the two towns and their football teams.

In 1931, the West Michigan Conference was formed. Its founding members included Whitehall, Montague, Hart, Shelby and Scottville (now Mason County Central). Football in West Michigan was now official and has been ever since. Things are a little hazy regarding records, scores, pictures and details of those first years, but one thing was certain: Montague and Whitehall were still battling.

In the 1950s, the teams played twice a season. Opening and closing with a crosstown rivalry game would have been pretty awesome. Equally fun would be the possibility of “The Bell” being at both schools in one season. The Bell, however, wasn’t part of the early rivalry.

No one knows for sure, but consensus is that “The Bell” was introduced in the mid-1950s.

In her article from the White Lake Beacon, Sally Slaughter writes, “Jack Bendelow, who coached the Montague Gridders from 1953 until 1969, believed the tradition began in 1955 when Whitehall and Montague played each other for the conference championship.”

What is certain is that for more than 50 years, the annual “Battle for the Bell” has been marked on the calendars of players, coaches and residents alike.

This is evident in the attendance record set on Nov. 14, 1958. Official attendance, according to the Montague Observer, was listed at 2,370. But, unofficially, the observer reports that, “In some quarters, the attendance at the game was 5,000.”

This year marks the 115th time that the cross-river rivals will “officially” meet and the edge is still as sharp as ever. The Wildcats lead the all-time series, 64-48-2, but since 1950 the matchup is extremely competitive at 41-36.

Twenty-five of those games have been decided by eight points or fewer, and seven of those games by a single point. Even more incredible is the average score in a “Battle for the Bell” matchup, with Montague averaging 18.1 points and Whitehall 17.9 points. Over the course of 100 years, these two teams have essentially played to a tie. 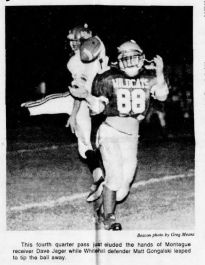 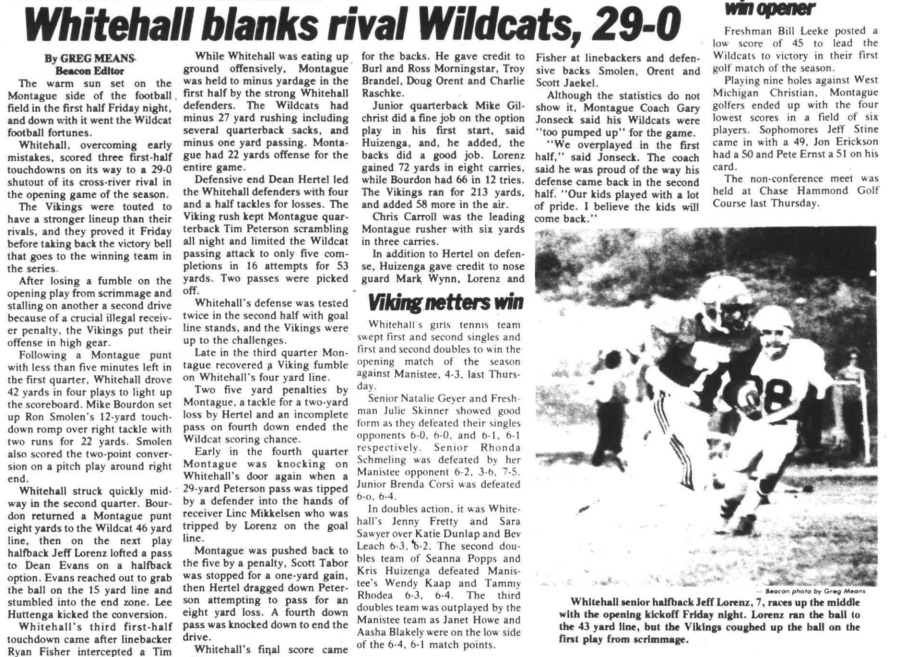 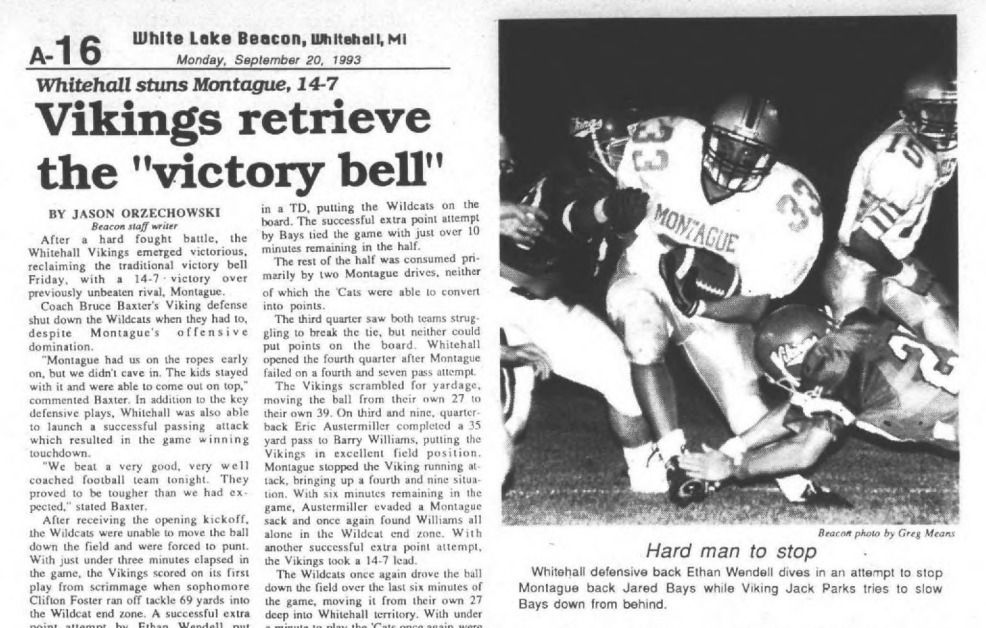 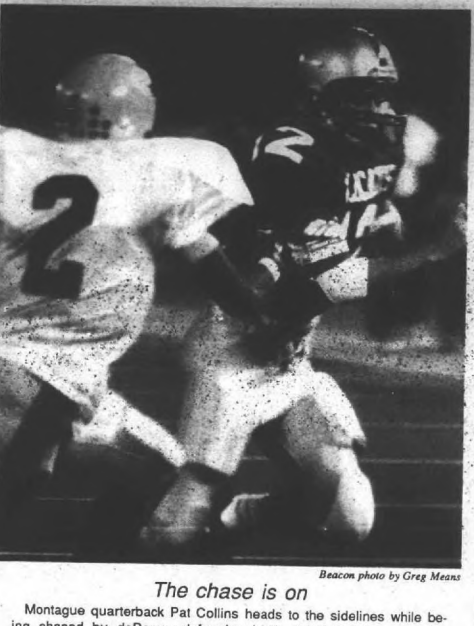 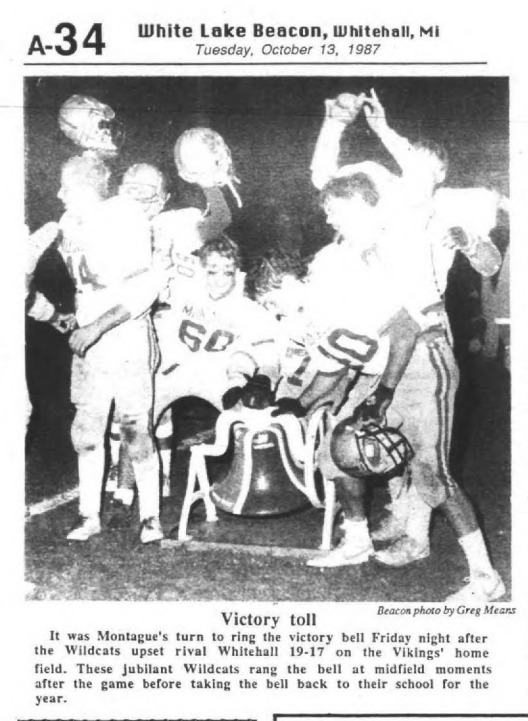 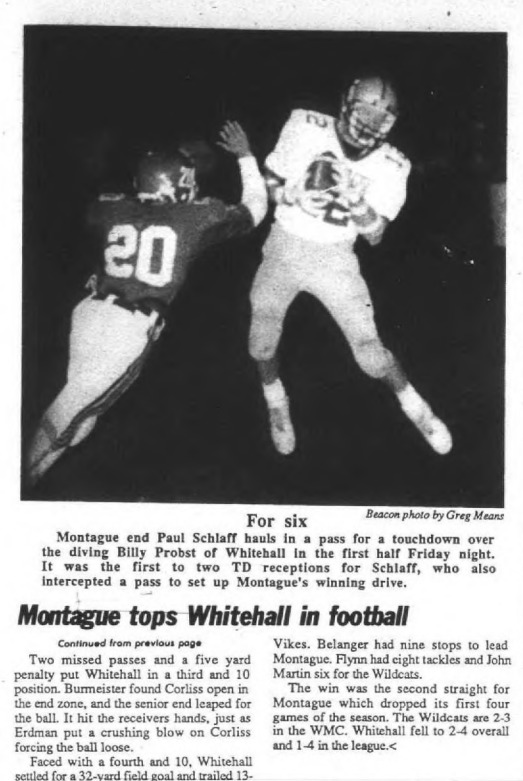 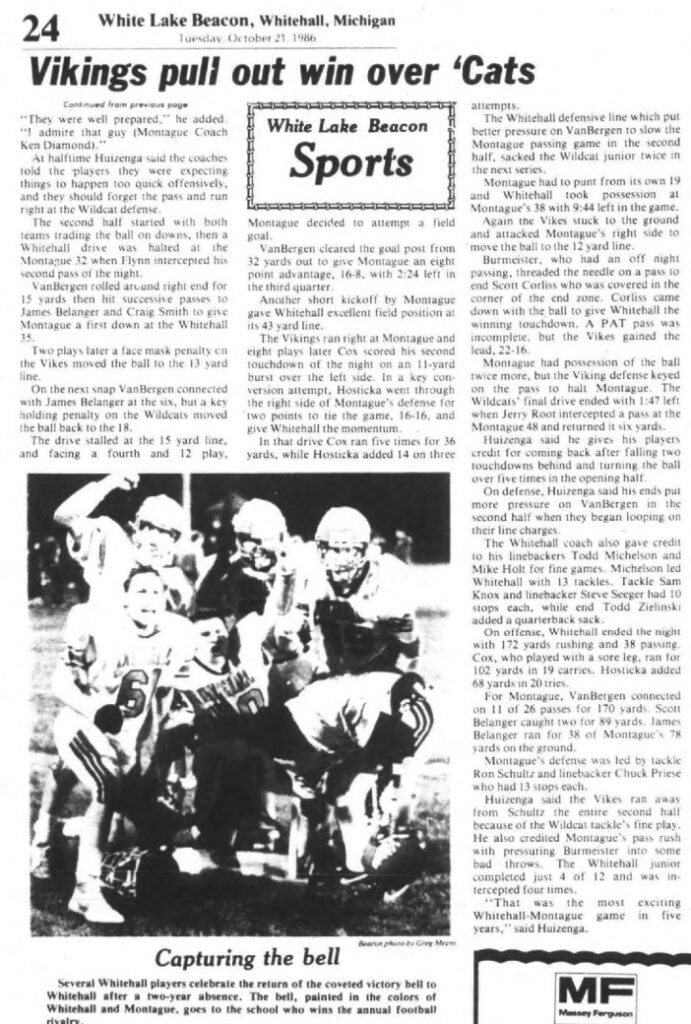 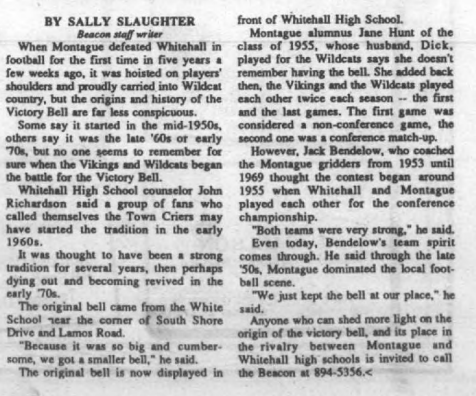 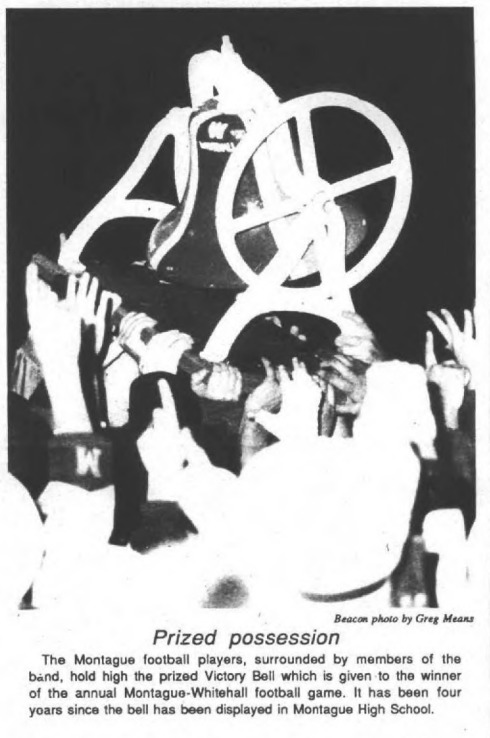 Whitehall opened the new century with a win in 2000, but over the two decades it has been tough sledding for the Vikings. “The Bell” has graced the halls of Montague High School for 18 of the last 21 years with the Vikings briefly snatching her back in 2006 and 2014.

Last year’s game was an instant classic, with the host Wildcats winning 34-31 in double-overtime on Andrew Kooi’s 23-yard field goal en route to a state championship. Because of COVID-19 restrictions, no attendance records were broken, but more than 5,000 people tuned in live to watch the broadcast.

Not bad for two towns with a combined population of 5,385.

Regardless of who wins or loses, one thing is certain: This is one of the best rivalries in the country. If last year is any indication of things to come, these two conference-title contenders will produce another gem for us this year.

For a full list of wins, losses and statistics, see the table below:

In coin-toss of a Montague-Whitehall matchup, ceremonial event on bridge shelved again
Muskegon-area Week 8 football schedule: ‘Battle for the Bell’ clear Game of the Week