MUSKEGON – Twins Raegan and Reilly Murphy are very close and genuinely happy for each other’s successes.

Both are also very competitive, including amongst each other. Take, for example, Raegan’s response to the fact that Reilly has won multiple Michigan Community College Athletic Association player of the week awards this season for the Muskegon Community College volleyball team.

“She gets it and I’m like, ‘Again?!” Raegan Murphy said as she and her sister shared a chuckle.

Truth be told, both have earned their share of accolades as leaders for the Jayhawks, who are in Cedar Rapids, Iowa, for the NJCAA Division II national championship tournament Nov. 17-19, at Alliant Energy Powerhouse. 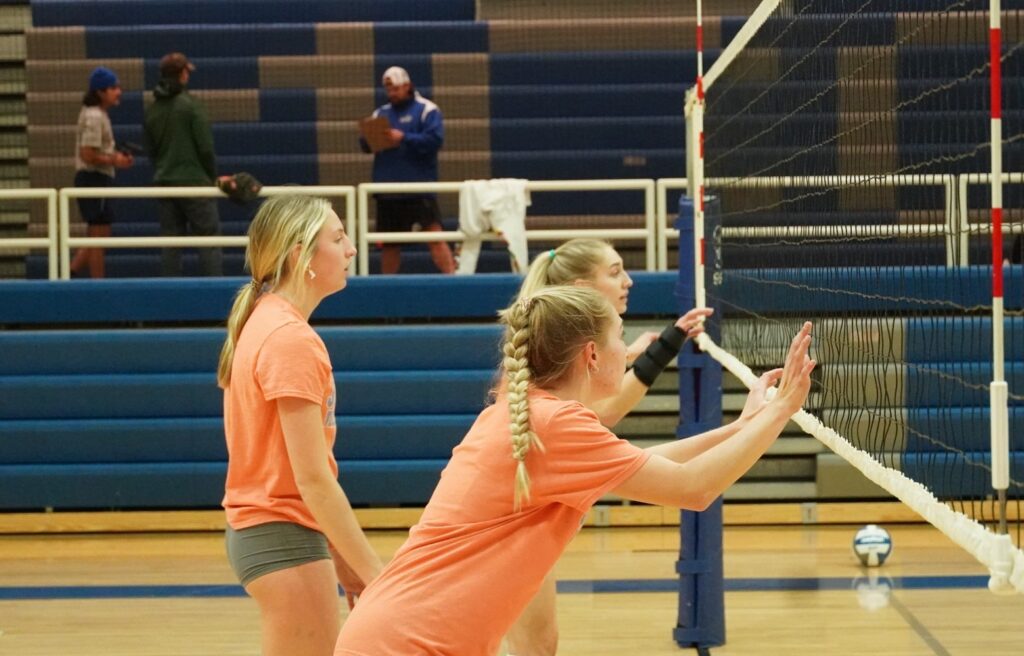 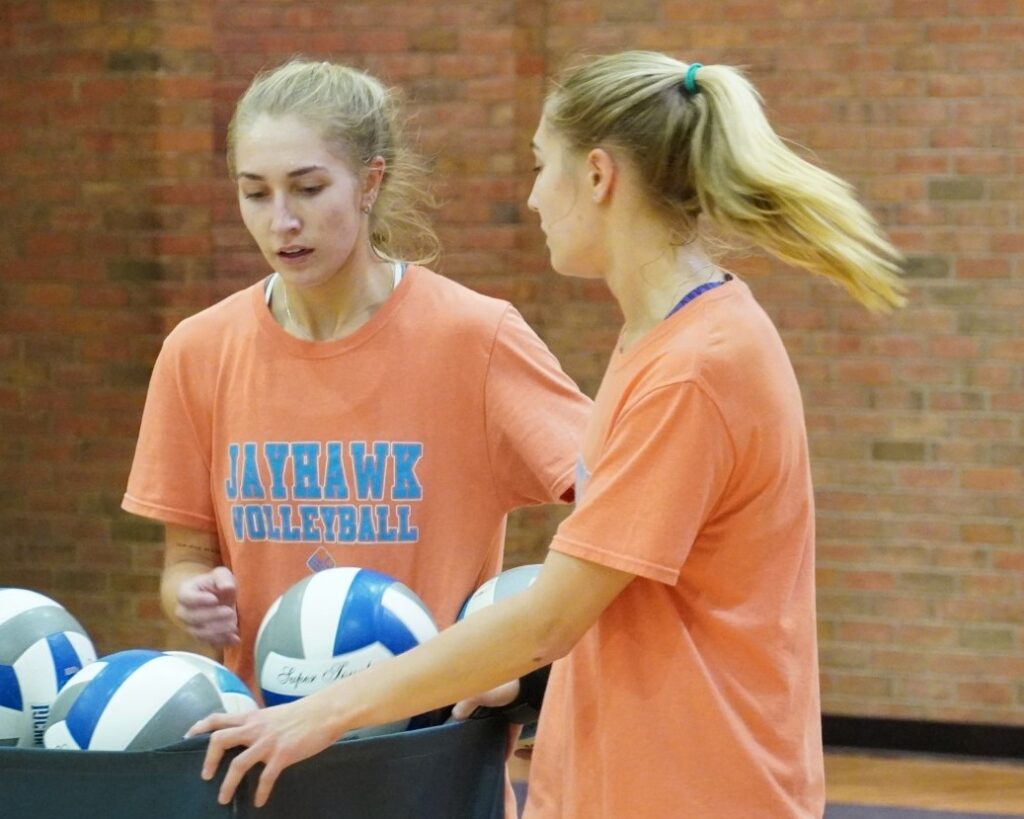 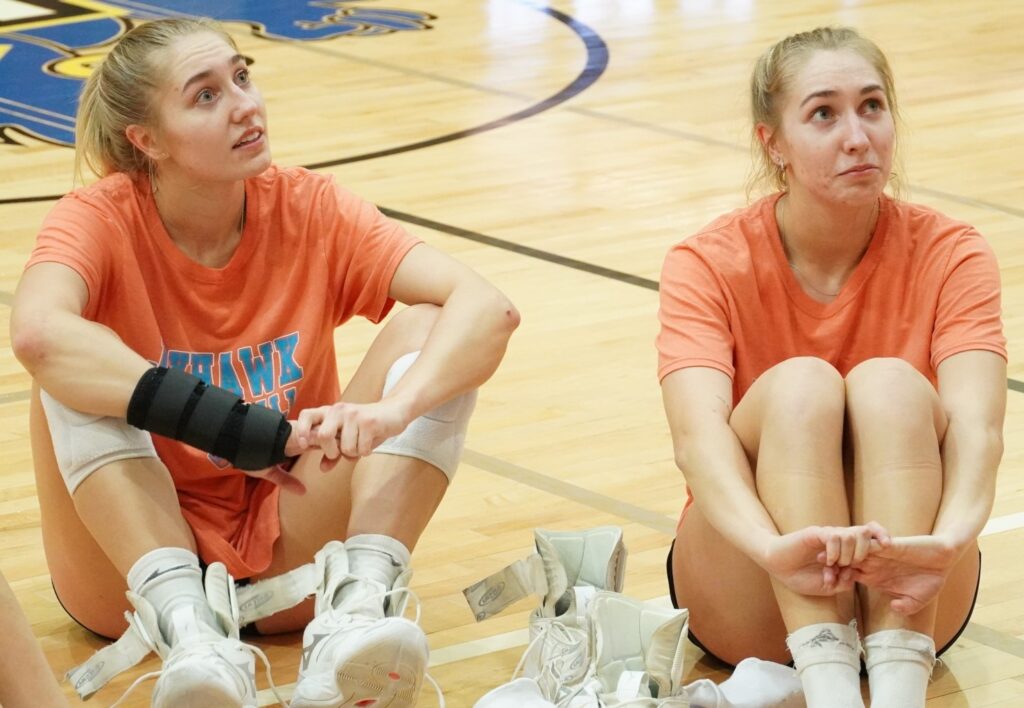 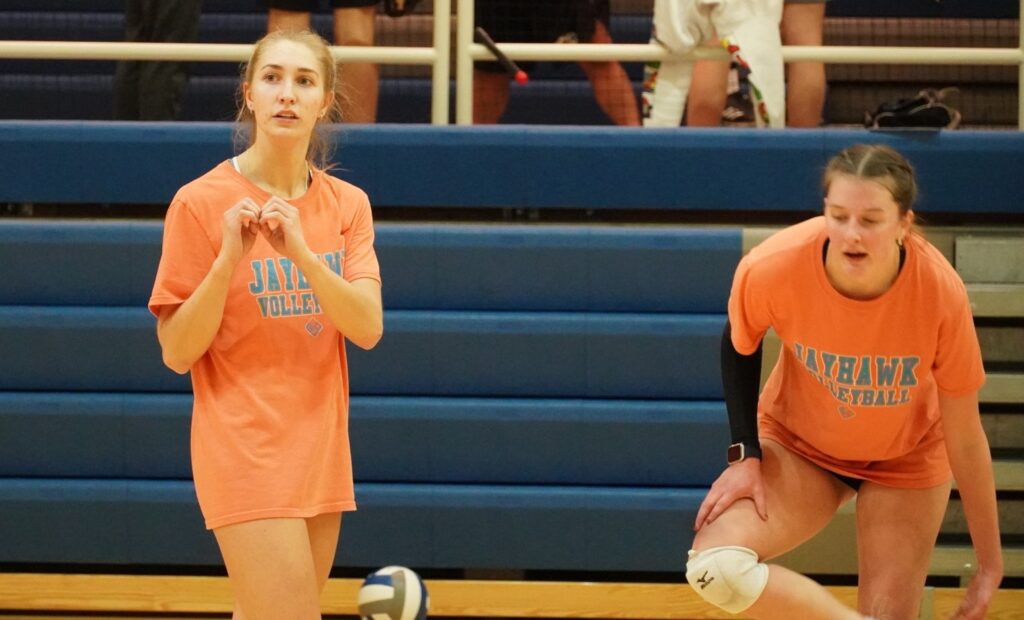 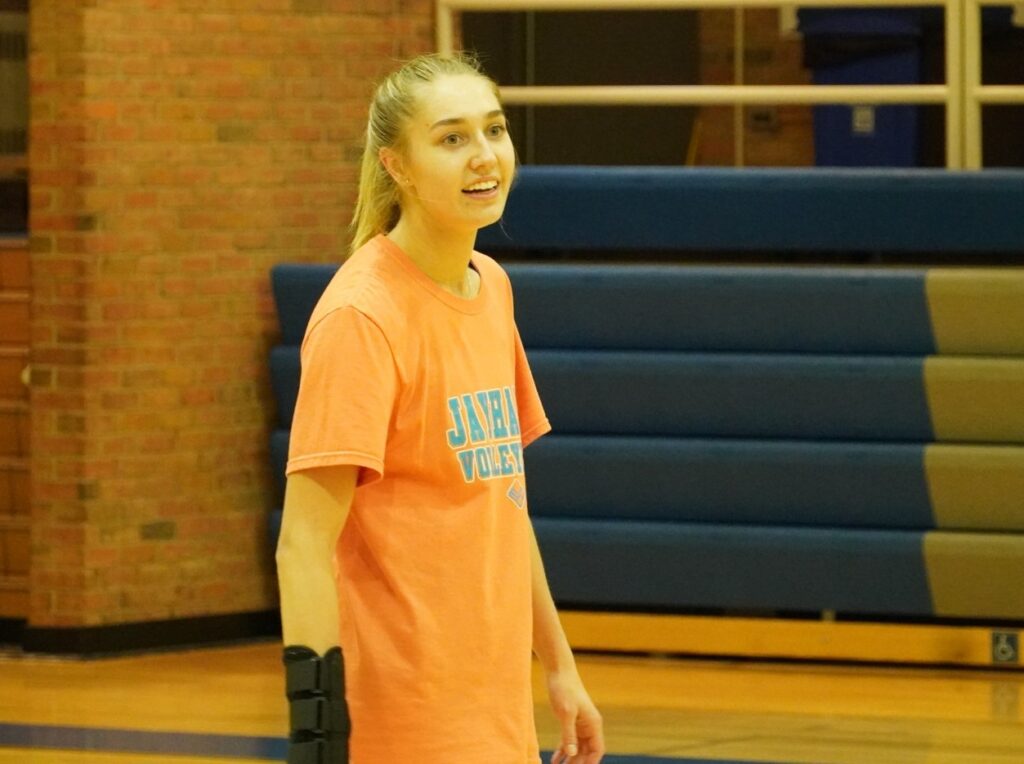 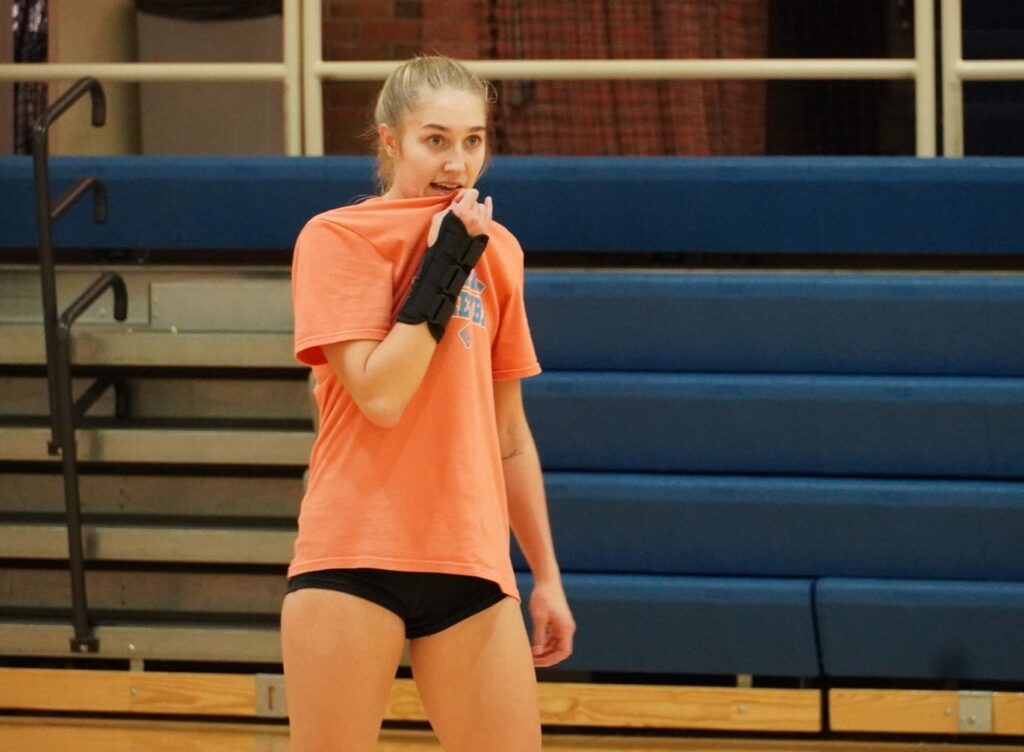 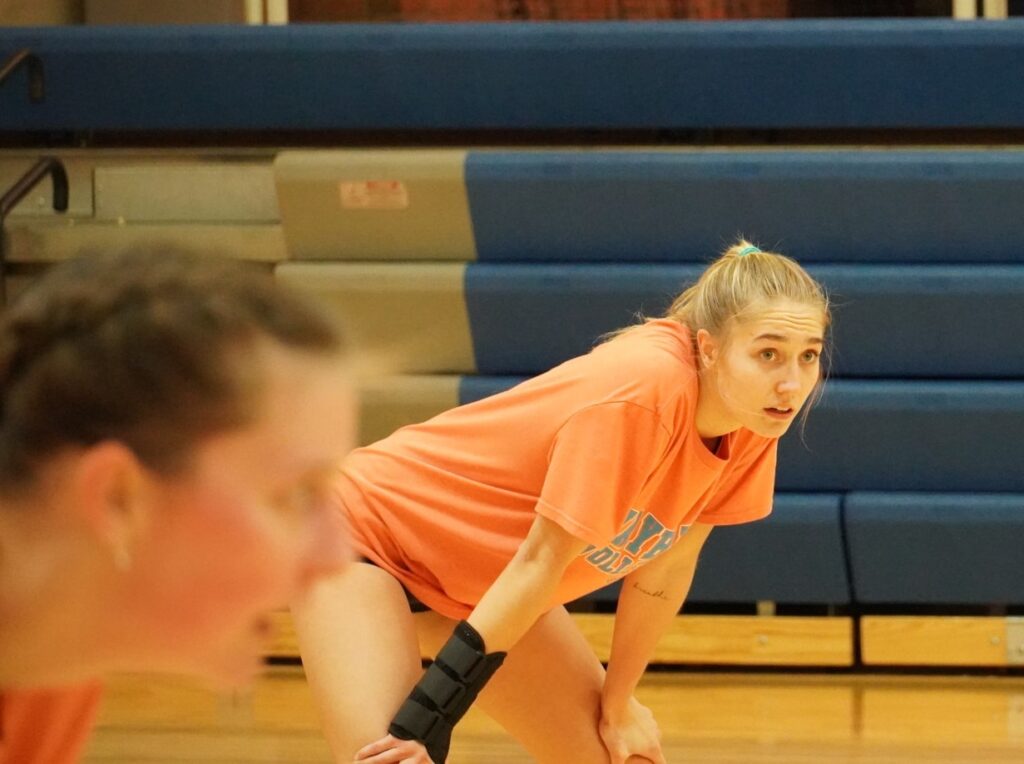 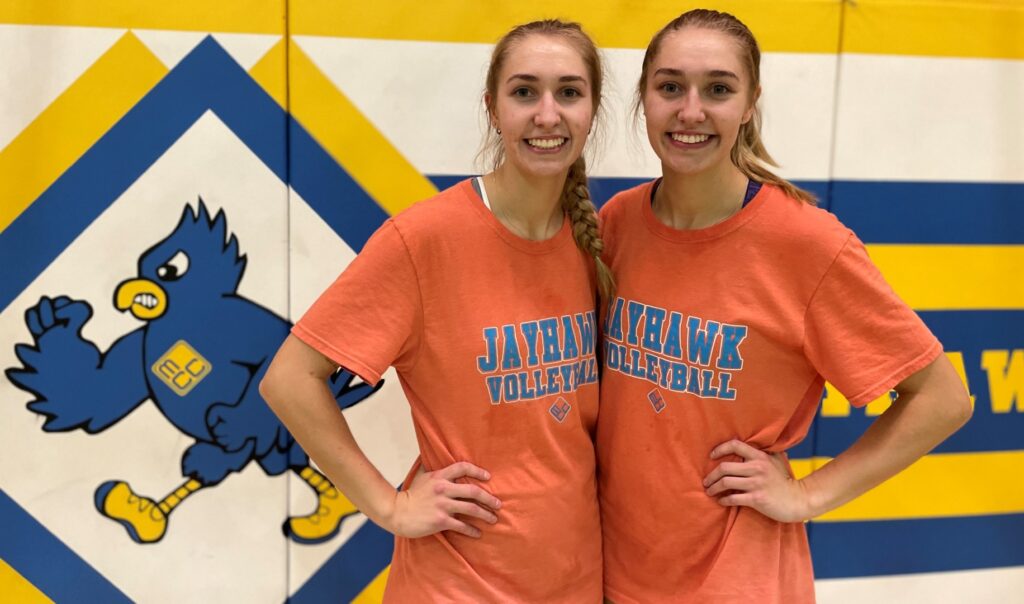 The Jayhawks are on a roll. They carry a 14-match winning streak into nationals and they’ve won 22 of their last 24.

“Our goal started with, ‘Let’s make it to nationals,’” Raegan Murphy said, “and now that we’re there, we’re like, ‘Let’s just make a showing. We’re already there, end of our season, let’s go out with a bang.’”

If the Jayhawks make a run at nationals, then expect to see the Murphys making a lot of plays.

Raegan and Reilly Murphy are both listed as 5-foot-9 on the MCC volleyball roster. Raegan is a setter, while Reilly is an outside hitter. They’re the same positions they played at Montague.

“It’s crazy to think we’ve made it this far and moving on, too. It’s crazy to see, especially together, but obviously I didn’t think this would happen for either of us.”

Both of the Murphys have earned multiple MCCAA Northern Conference Player of the Week honors, as well as All-MCCAA and all-region recognition. Reilly Murphy was MVP of the regional.

While they both love bragging rights – Reilly was born a minute earlier, while Raegan is maybe half-an-inch taller – the sisters have each other’s backs no matter what.

The Murphys know that neither would be enjoying this degree of success without the other.

“It’s cool to think that, like, every ball she hits she’s getting from me so I’m still part of (her success) and even still I wouldn’t get my awards if she wasn’t doing what she’s doing,” Raegan Murphy said. “It’s just, we have each other in those.”

They’re two of only three seniors on the Jayhawks roster, joining Ludington’s Elena Vaara in that distinction.

MCC coach Rick Rykse highlighted the leadership of the Murphys, who have both been team captains in their two seasons with the Jayhawks.

“Both of them are two of the hardest-working, dedicated kids that I’ve coached. They’re in the weight room all the time — they work hard. (In the) offseason, they’re always working hard,” Rykse said.

“A lot of why they’re so good is just because they outwork everybody. And they push each other also. They both want to be better than each other, but they also support each other as well.”

As much as they push each other, Raegan and Reilly Murphy cannot imagine life without the other.

Raegan and Reilly Murphy, 19, are the second set of identical twins in their own family, joining older brothers Braxton and Bryce, 21.

Raegan and Reilly both will be attending McPherson College in Kansas after MCC, where they’ll continue their volleyball careers. Raegan is studying biology, while Reilly is pursuing communications with an eye on digital media.

Raegan sports a higher GPA, but Reilly is OK conceding that.

“We were pretty much a package deal anywhere we went (to college),” Reilly said. “I think it’s going to be crazy when we grow up or think back on it. We’ll have these memories to share for sure. We’ve talked about it, most twins aren’t very close. I mean, you’ll get that occasionally. But with us being this close … .”

Raegan finished Reilly’s thought – another sign of their telepathy.

“We’re super close,” Raegan said. “Like, it’s nice that we can stay together still. Not many people play with their siblings on a college team, so it’s just cool being able to play at this high level with Reilly.”