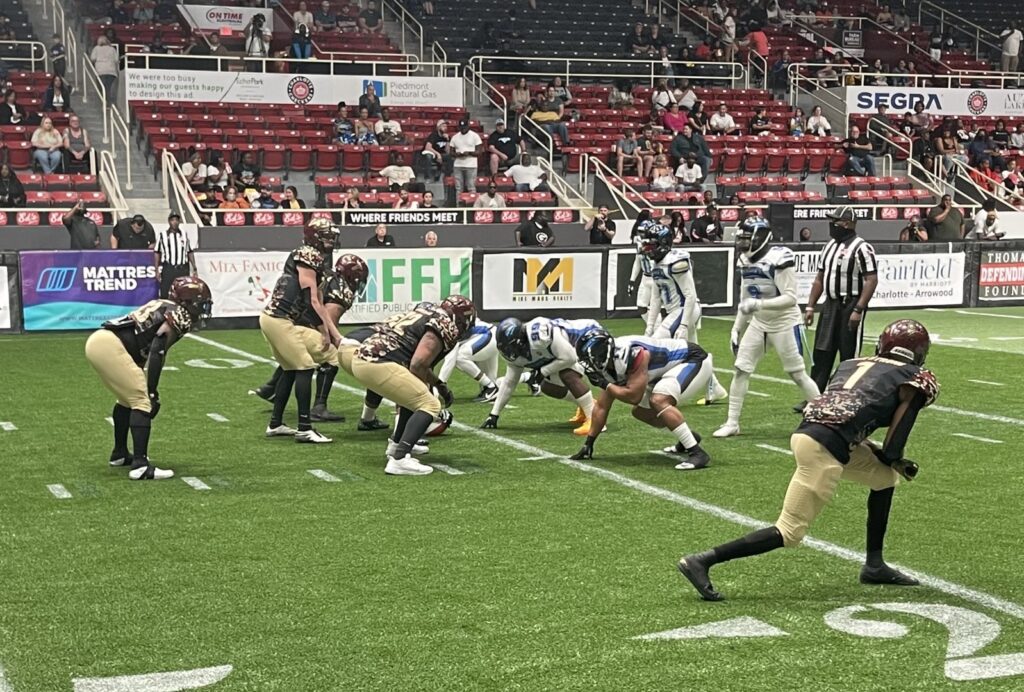 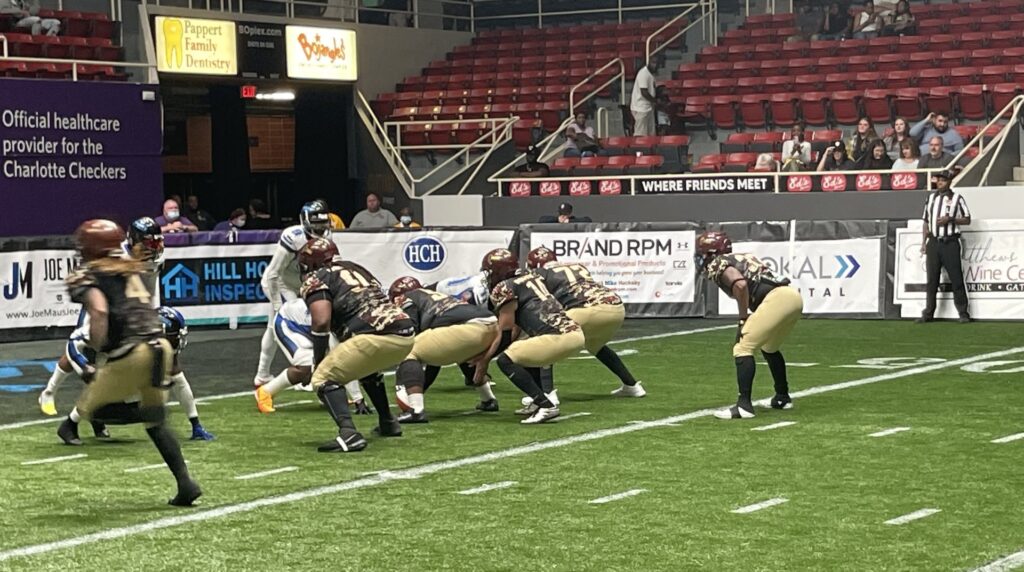 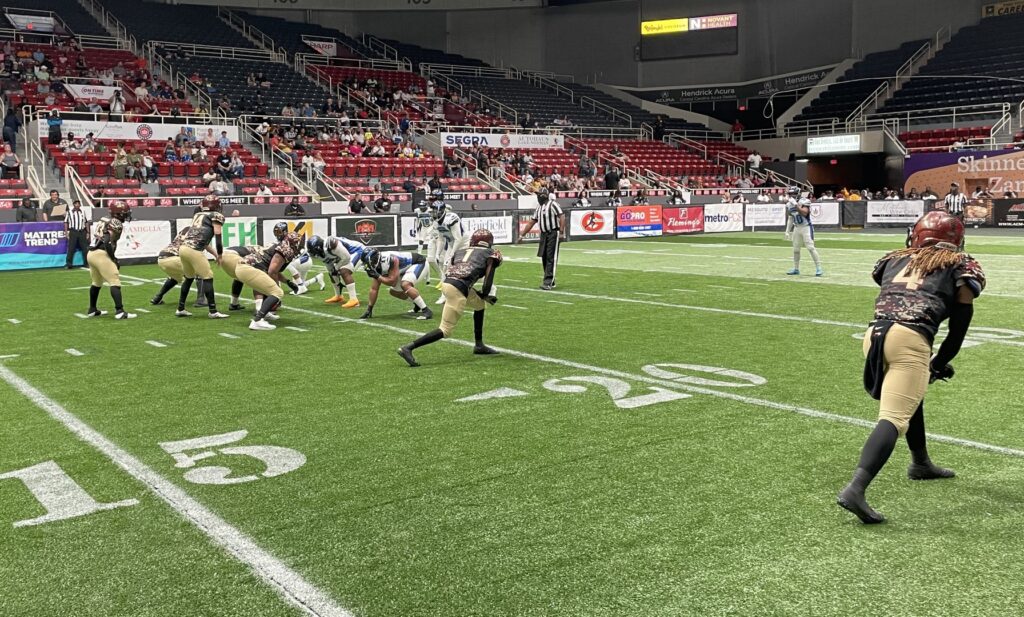 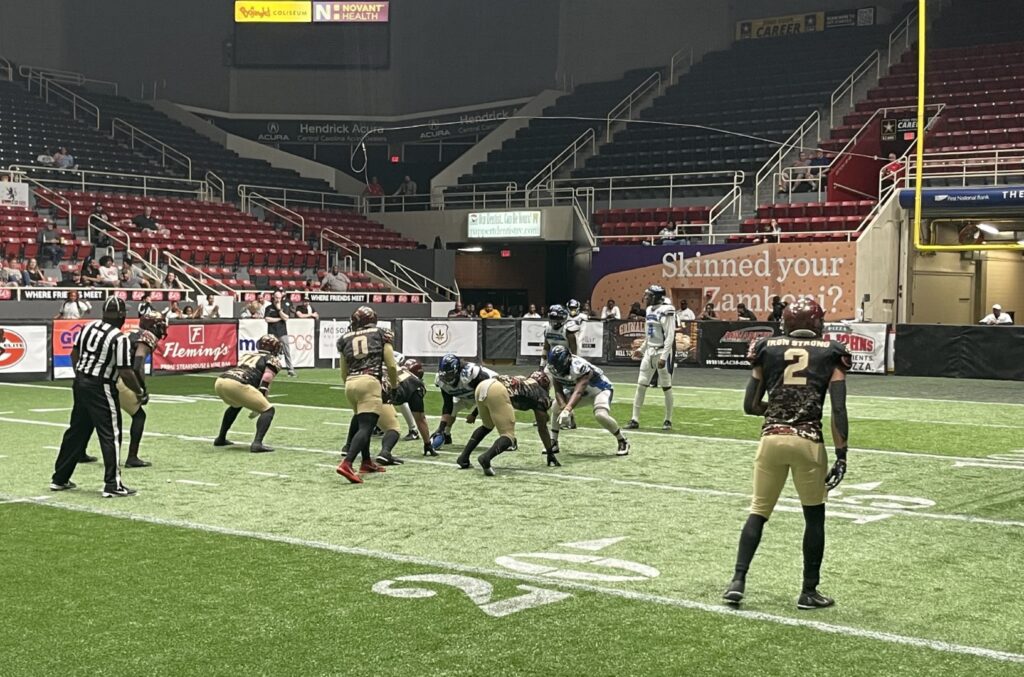 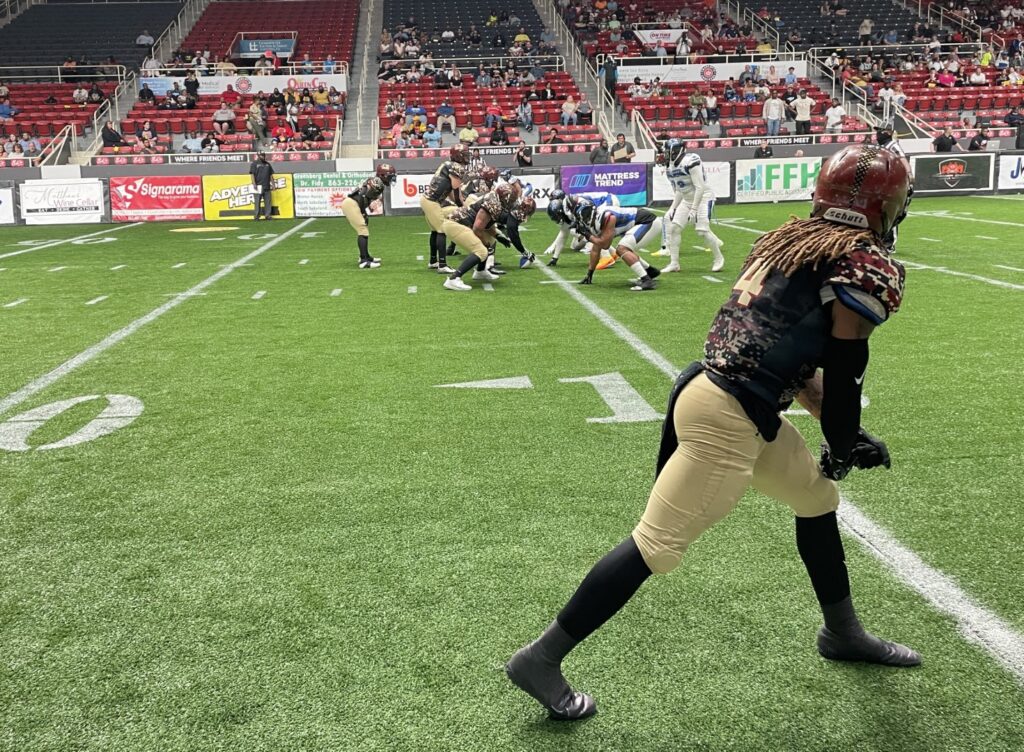 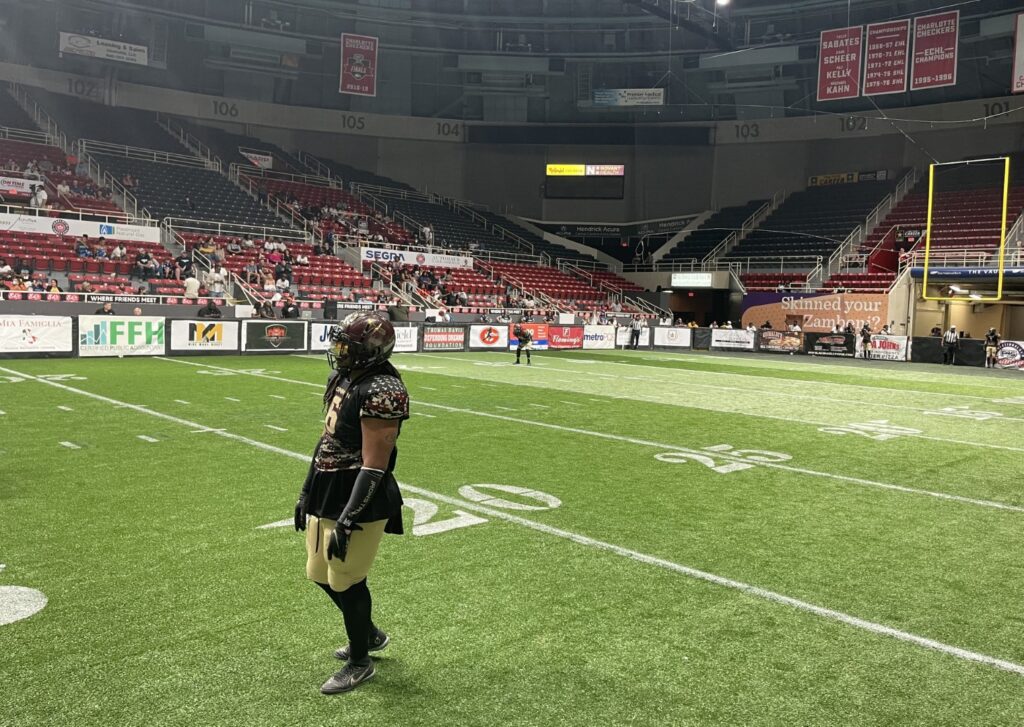 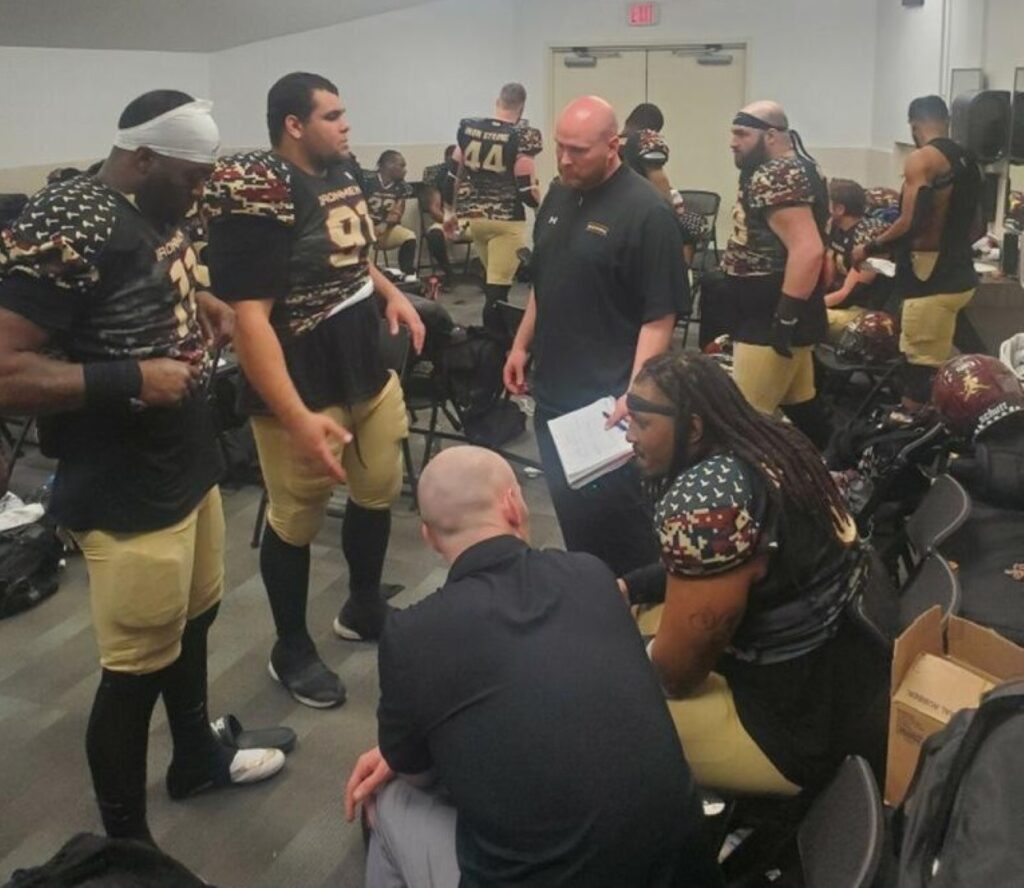 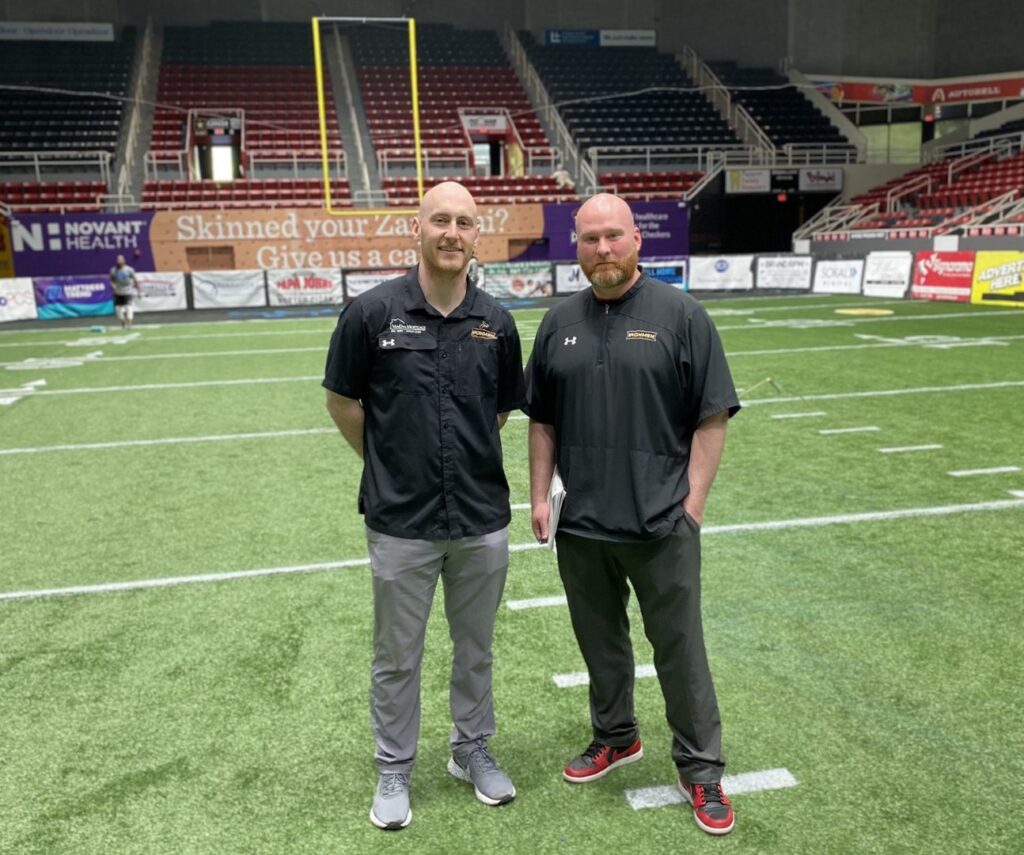 The West Michigan Ironmen suffered their first defeat of the 2022 season in Saturday night’s 72-55 road loss to the Charlotte Thunder in Charlotte, N.C.

In their Professional Arena Football League rematch from a 55-51 season-opening win, the Ironmen lost a couple players to injuries from the 25-man travel roster.

The 30-hour roundtrip trek to and from the Queen City was not a complete loss by any means. The Ironmen learned a few things:

“Obviously, we’d like to be 3-0, but we lost to a good team tonight. With all things considered, going into the game you say we’re going to lose two or three of our starters during the game, we’re going to make some freak turnovers – to be in the game like we were, I’m happy with that. Obviously, we would have liked to be 3-0. I think it would have been a big statement win for us, but we’ll regroup,” Ironmen head coach and general manager Nate Smith said in a phone interview with CatchMark SportsNet.

“We had a great discussion after the game. The guys were awesome as far as evaluating themselves and evaluating where we’re at. It’s only been two hours (since the game ended) and we’ve had some great conversations for how we’re going to get things back on track.”

The Ironmen (2-1) are looking to host their next game on Saturday, April 30, but it depends what happens with the USHL playoffs and Muskegon Lumberjacks, who also call Mercy Health Arena home.

Smith said the next opponent would be the Kentuckiana Kurse. According to Smith, the Ironmen should know by Tuesday or Wednesday if that game will be played.

West Michigan lost linebacker Josh Holley in the first quarter and defensive Jamal Abbey in the second quarter to injuries, Smith said. He said they are day-to-day injuries.

Still, the Ironmen were right there in the first half. They trailed 19-13 after one quarter and 33-27 at halftime. The Thunder opened it up a bit in the third and took a 50-35 lead into the final quarter.

“I think turnovers got us. It always comes down to possessions. We were right where we needed to be at halftime. We were within seven coming out and getting the ball right away and we had an interception the very first play of the second half,” Smith said.

“Really kind of a freak thing. Their defensive back tried to re-route our I-motion receiver, missed him and because he missed him, he ended up rolling and falling into the flight of the pass that was coming.”

Miscues and turnovers at critical turnovers proved the difference, according to Smith. He said the defense played pretty well despite having a “M.A.S.H. unit out there.”

Stats were not available from the game, but Smith highlighted the defensive play of linebacker Derek VandenBosch and lineman Nick DeKraker. He noted a big game by receiver Mike Wynn, who made some highly contested catches.

Smith believes the team’s overall effort is one the Ironmen can build upon.

“We were a couple plays away from that game being completely different. I mean, this is good. The spirit of the team is positive. I mean, they would rather come down here and have a game like this than an 80-0 blowout,” said Smith, who has an even greater appreciate for the Ironmen’s fans and home venue.

Bojangle’s Coliseum “is not Mercy Health Arena, you know.”

“We probably had three times the fans that they have. The stadium is nice – it’s a big stadium, there’s no scoreboard interference or anything like that, so that piece of it is nice,” Smith said. “The fans over there were engaged, but we’re used to playing obviously in front of a much larger crowd.

“It was tough – there was not much energy in the arena. We really had to push ourselves to create our own juice during the game.”