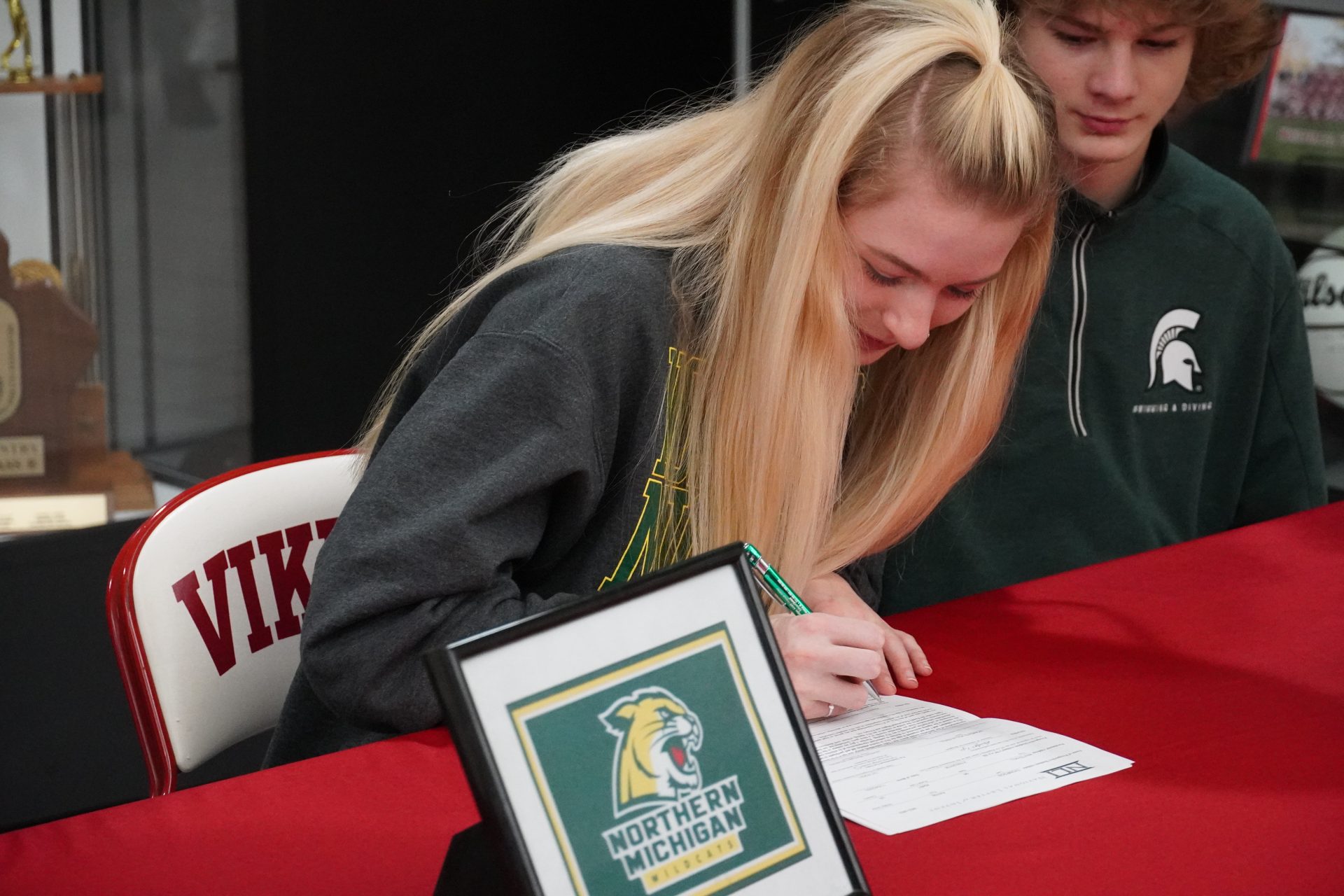 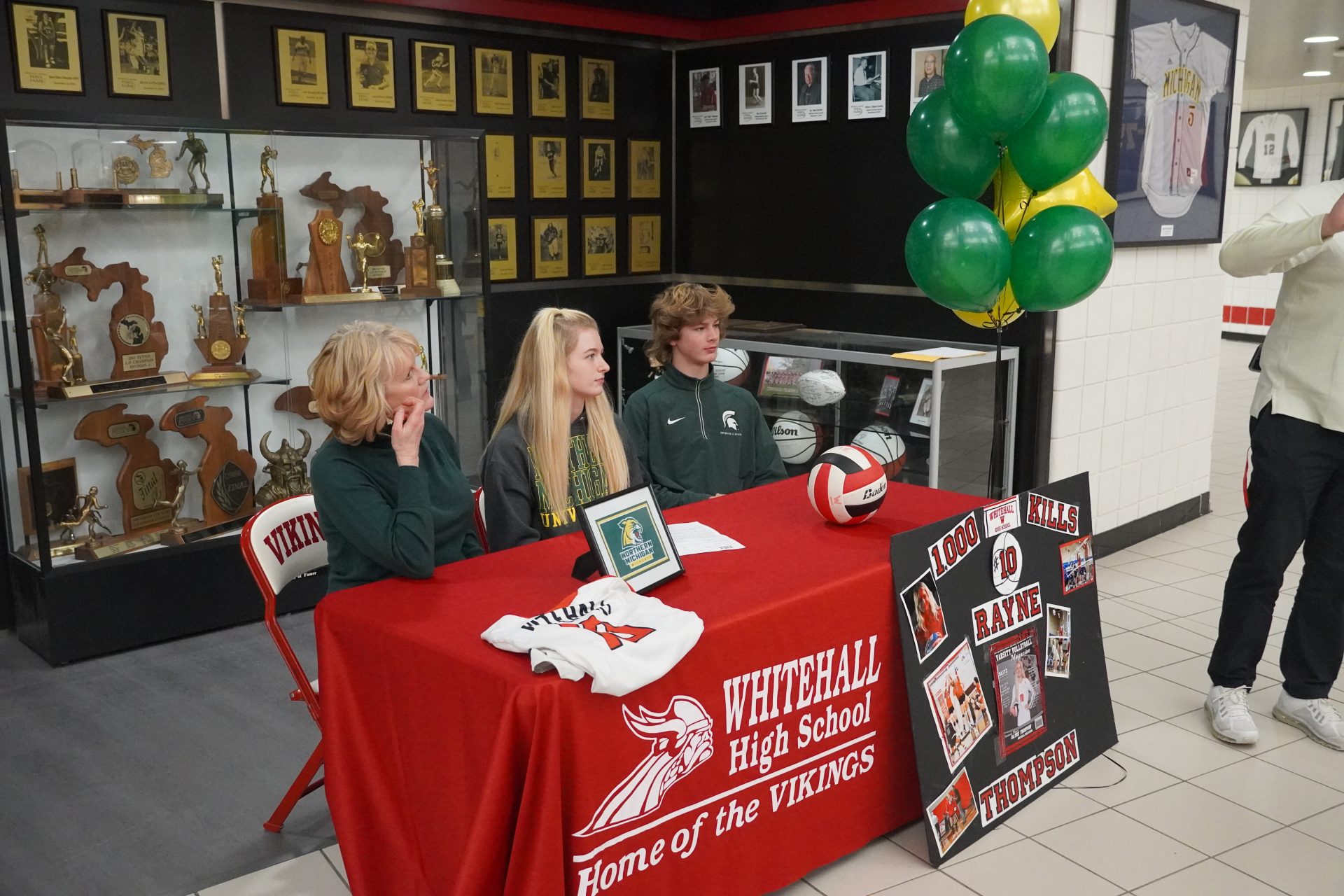 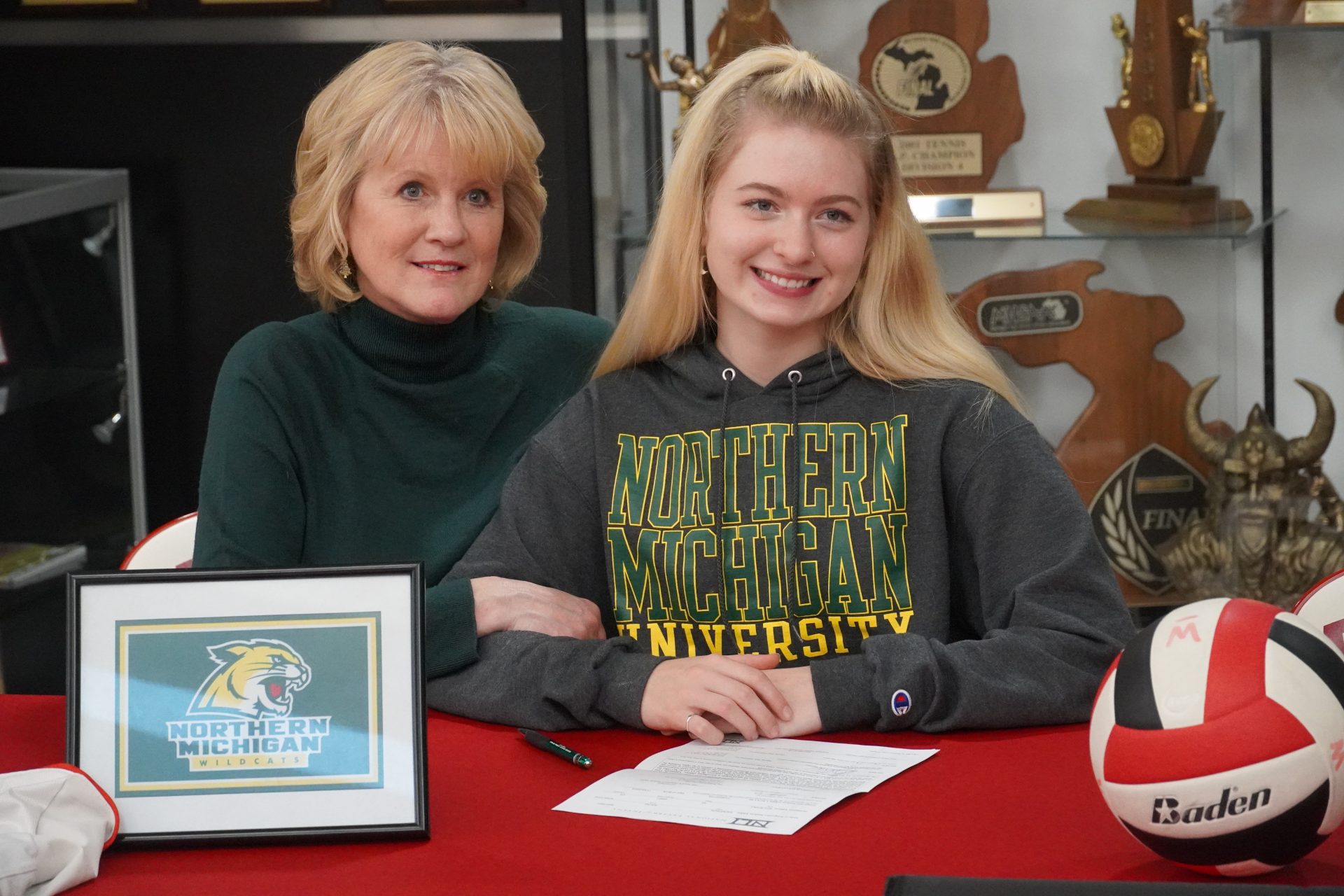 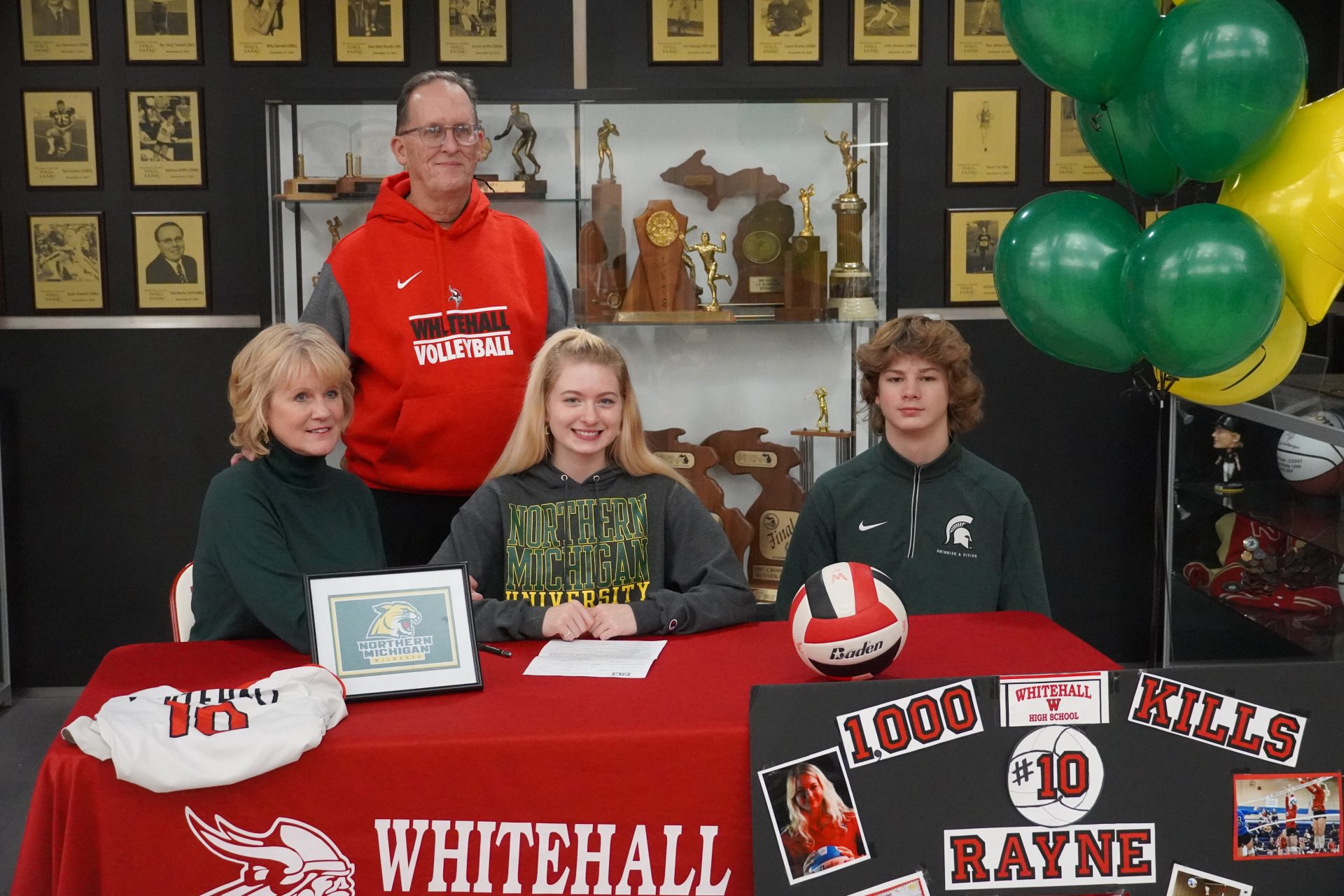 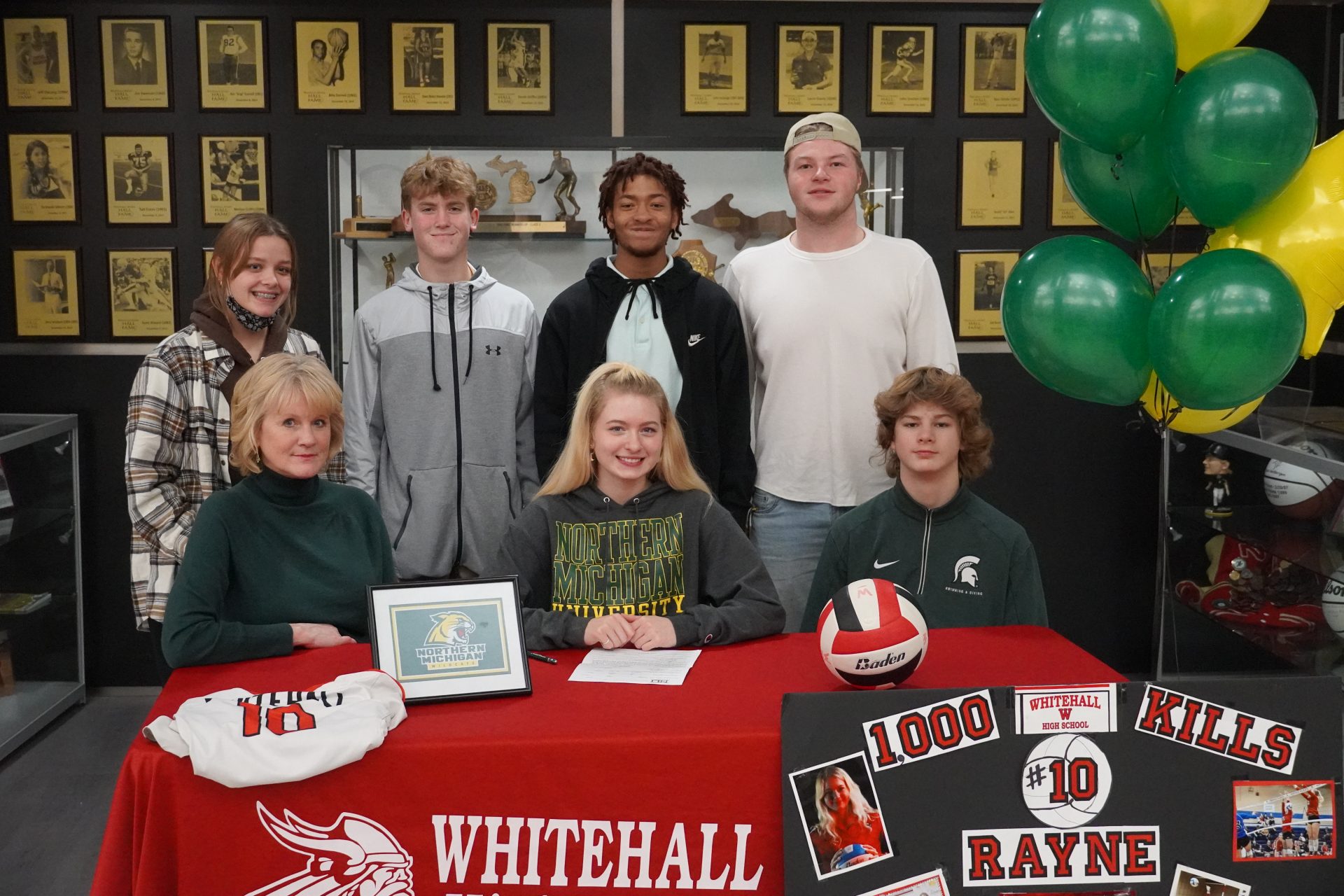 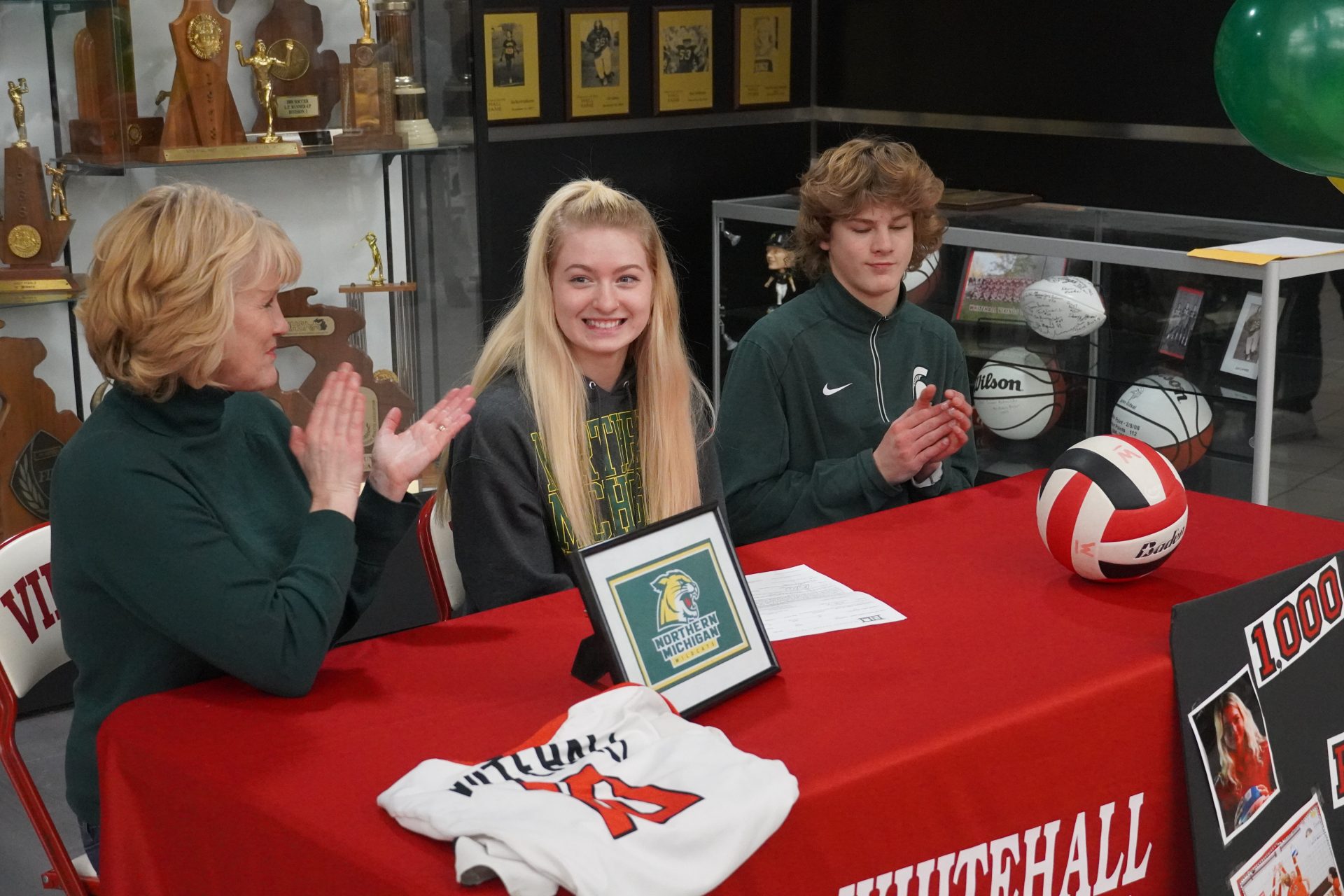 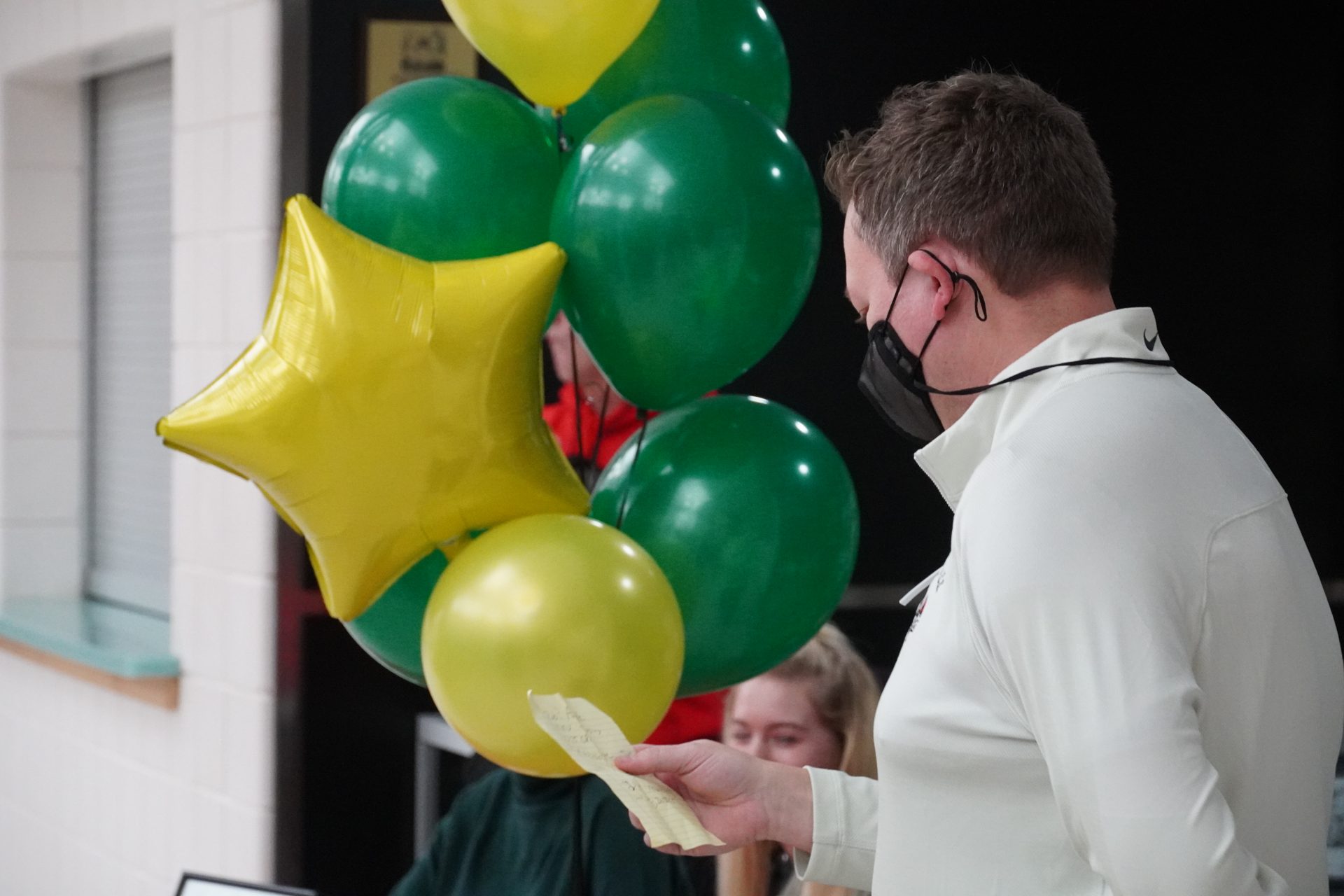 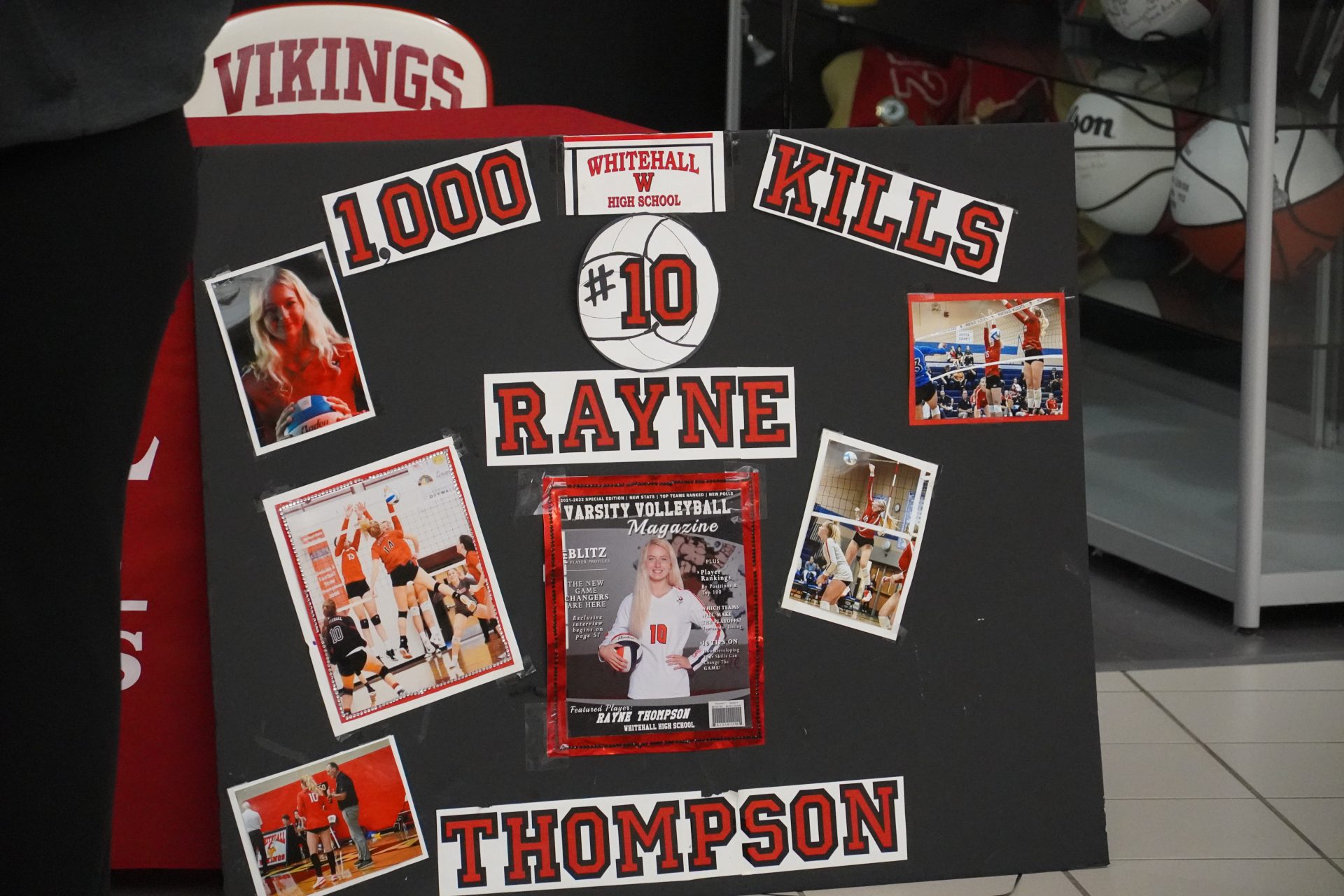 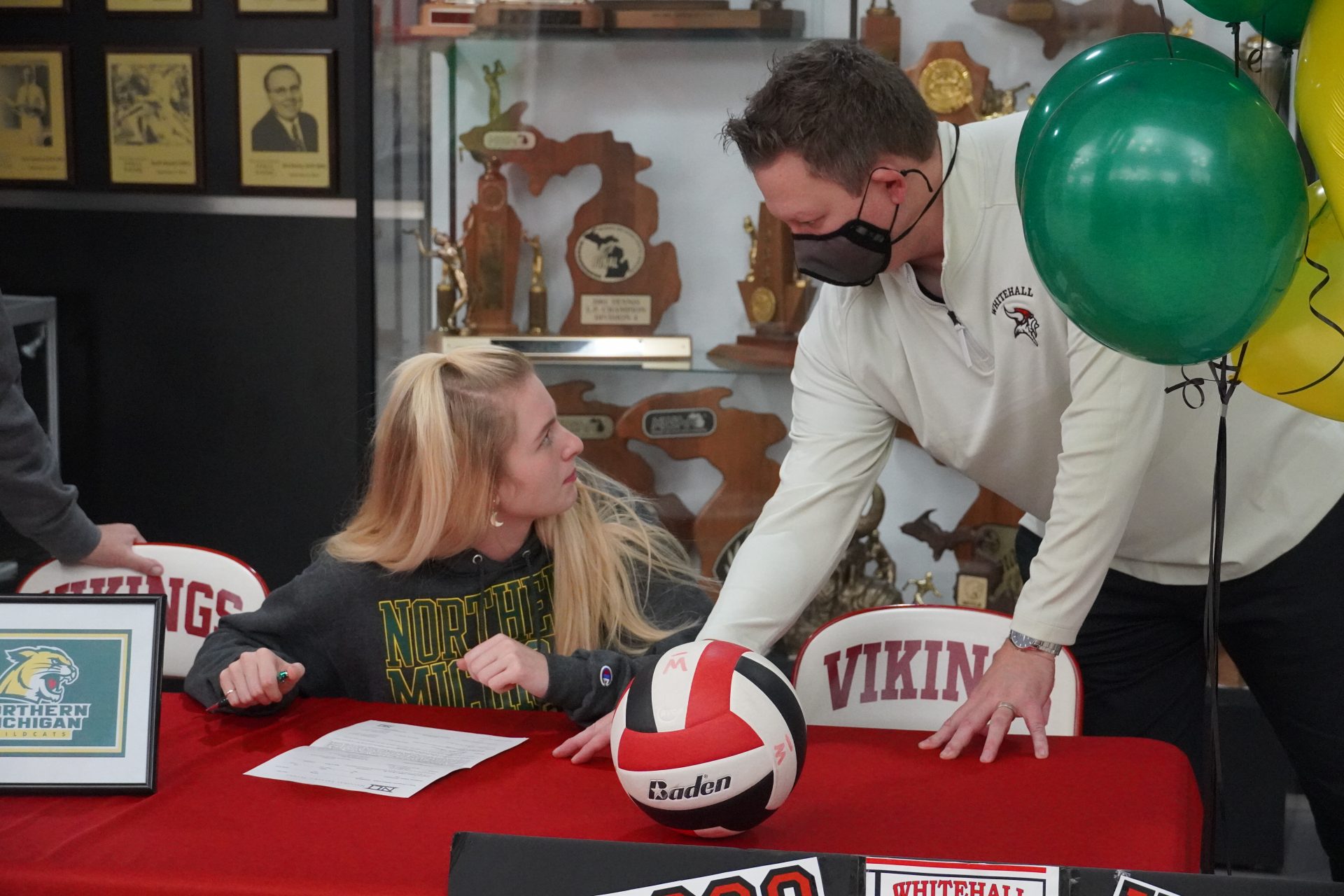 WHITEHALL — Overcoming adversity is one of the greatest challenges that a high school athlete may encounter. As any player would tell you, things don’t always pan out the way that they are expected to.

Whitehall senior, Rayne Thompson has seemed to become somewhat of an expert at jumping through the hoops of adversity. This type of dedication and expertise is what landed her collegiate volleyball offers at the Division I and II levels.

Today at Whitehall High School, Thompson sealed her fate when she signed a letter of intent to play volleyball at Northern Michigan University. She looks forward to her future in Marquette, Mich. as a nursing student and a Division II volleyball player. Thompson also received offers from Bradley, Michigan Tech, and Ferris State, just to name a few.

This day of celebration brought happiness to Thompson, as well as her coach, family and friends. She was joined at the signing table by her brother Camden, who is a freshman at WHS and her mother, Annette. The trio shared smiles and laughter amongst a crowd of students that surrounded the table.

It would seem that all of Thompson’s hard work has finally paid off, but she doesn’t look at it that way. The Viking volleyball star is focused on improving her game, and making a contribution next year at the college level.

After a season-ending knee injury in the 2020 season, Thompson was forced to miss out on her junior year of volleyball. Despite the setback, Rayne worked diligently to rehabilitate her injury with I’move training director, Mike Braid. Braid describes her as one of hardest working athletes he has ever experienced, per Whitehall coach Ted Edsall.

As the season progressed, the Vikings were crowned 2020 district champions, even without the play of their stud outside hitter. The team ended their season in the regional. Meanwhile, Thompson continued to grind her way back to a clean bill of health.

Thompson’s anticipated comeback in the 2021 season created some buzz from scouting colleges. The dominant outside returned stronger than she had every been before. At 5-foot-10, the senior paced the Vikings with 1166 attacks and 566 kills, both of which rank third in Whitehall history for a single season. She also added 374 digs, 60 aces, and 53 blocks.

Thompson led her team to their second consecutive district championship and finished out her high school career with all-conference, all-region, and all-state honors. Although Thompson ended her season on a high note, she was still looking ahead at what is next.

Following a decision to forego her senior year of basketball, Thompson was selected to play volleyball for Inside Out under Muskegon Community College coach Rick Rykse. Here, she will play among some of the finest volleyball players along the lakeshore. “Loaded,” is how Edsall describes Rayne’s new volleyball squad.

Thompson plans to spend the remainder of her time in high school improving her game and enjoying time with family and friends. Obstacles ahead will only act as motivation for the determined young star. Edsall expects Thompson’s transition to be smooth, and looks forward to watching her have a successful collegiate career.