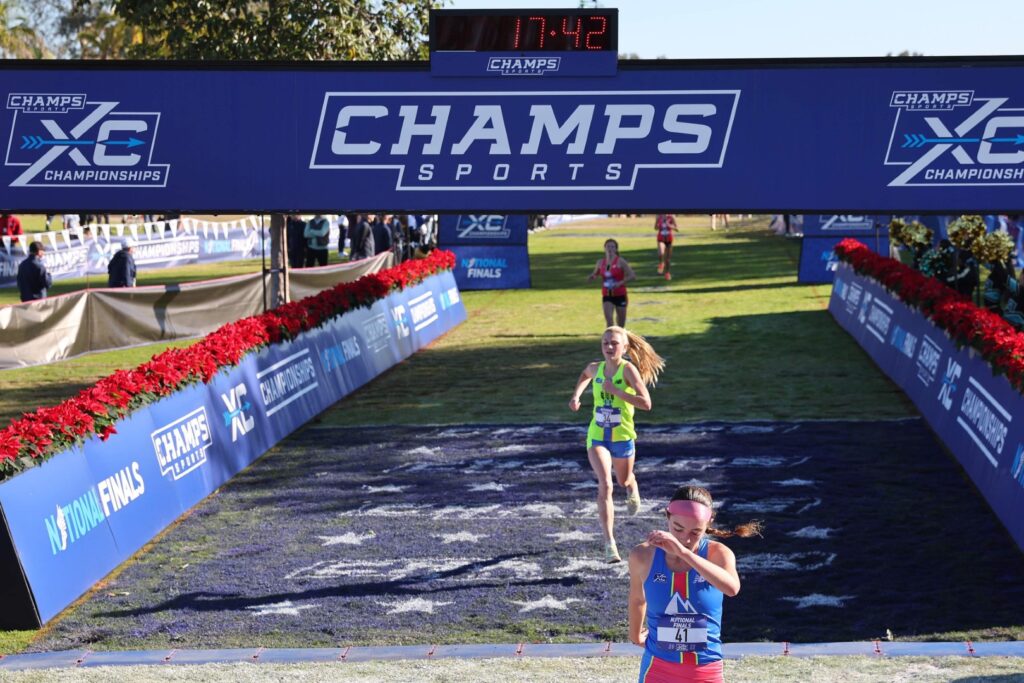 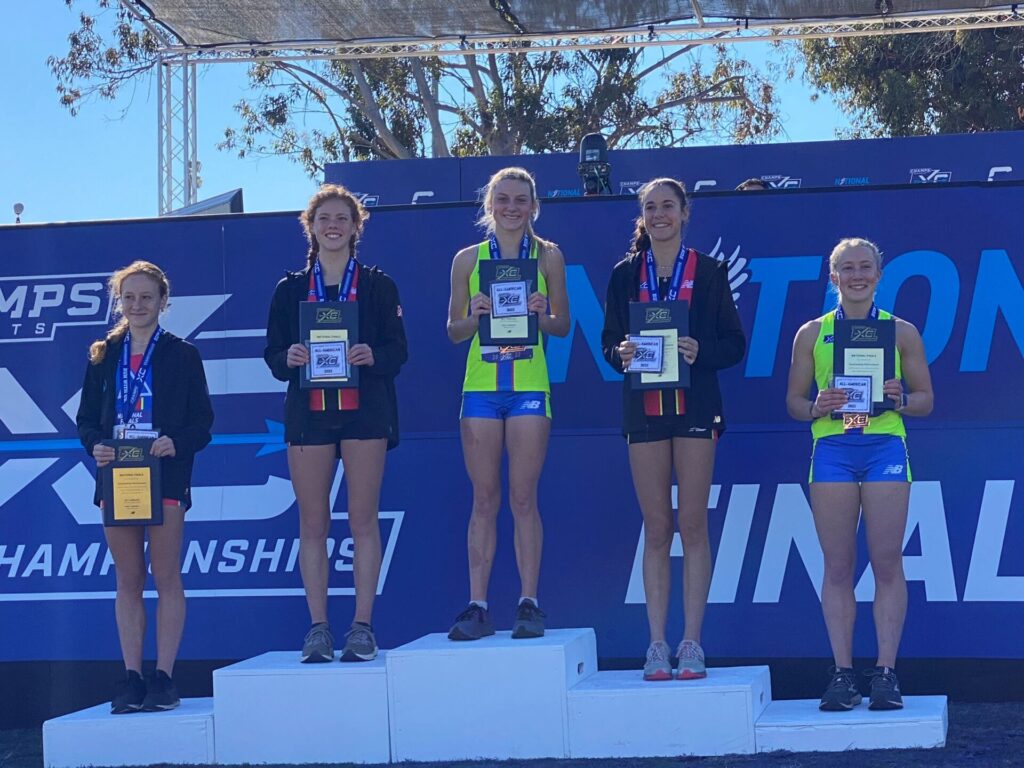 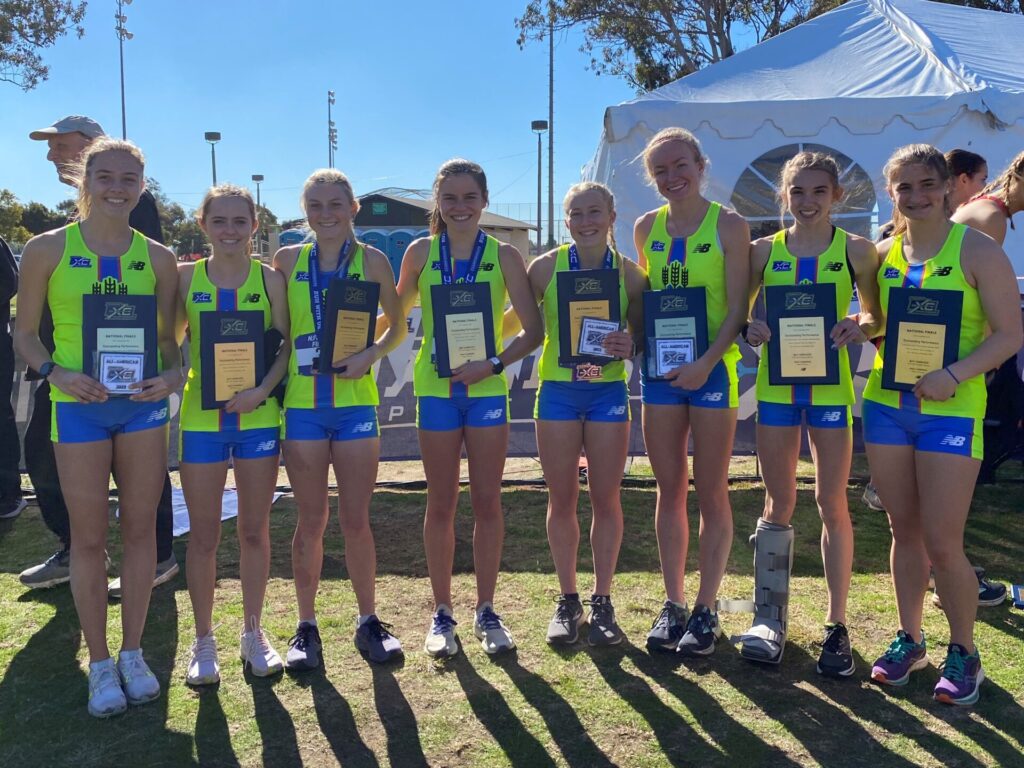 Jessica Jazwinski is accustomed to running the hills on and around her family’s blueberry farm in Shelby.

After finishing 11th and earning All-American honors Saturday in the 2022 Champs Sports Cross Country Championships in San Diego, the 15-year-old Hart sophomore feels on top of the world.

Jazwinski’s time of 17:43.4 at Balboa Park made her the top state of Michigan finisher in the revered race, formerly known as the Foot Locker Nationals. She joins Hart alumna Adelyn Ackley as an All-American in the race, as Ackley achieved the feat in 2017 (10th place, 18:00.0). The top 15 finishers achieve All-American status.

“It was definitely not like anything I’ve ever ran or done before,” Jazwinski, who competed with the Midwest team, said during a phone interview with CatchMark SportsNet Saturday. “The course was a lot different than Michigan courses or Midwest courses. We’re used to, like, golf courses with longer grass and muddy and stuff like that.

“It was super dry here. Most of the course was on dirt, so it was a lot different than I’m used to and it was different with all the girls surrounding me. It was really cool to get to compete right next to all those really great girls.”

“At first, arriving here was a little bit overwhelming. I didn’t really know what to expect,” Jazwinski said. “Kind of as I got to know the girls and the week went on, I got a little bit more comfortable and I started really focusing on the race.

“I started a little bit farther back (in the race), probably around 25th to 30th at the beginning, because I know everybody goes out really fast. I started out pretty far back and tried to work my way up. It was a lot more challenging than I kind of expected … I downplayed ‘The Hill’ a little bit just because we run a lot of hills. It was really challenging, but really fun.”

Making the experience even more enjoyable for Jazwinski was the fact that her family was able to accompany her on the trip to San Diego. Jazwinski’s parents, Bob and Katie, said that would not have been possible without the GoFundMe fund-raising efforts of the “Polish Posse,” family and friends who have supported them.

Bob and Katie Jazwinski were both standout runners in high school and college. Katie (Clifford) Jazwinski was the Big Ten Female Athlete of the Year for the University of Michigan in 2002. She qualified for the Olympic Trials in five events.

“I enjoy running. We love running,” Bob Jazwinski said. “We just have a passion for it and that’s what we want to do.”

The Champs Sports Cross Country Championships capped an unforgettable fall season for Jessica Jazwinski. She was a champion for MHSAA regional and Division 3 state finals races, running away from the pack for the individual state title Nov. 5 at Michigan International Speedway in Brooklyn with a time of 17:36.7.

Jazwinski followed up her MHSAA state finals performance with an even more impressive effort in the Nov. 12 at the MITCA Meet of Champions with a first-place finish and personal-record time of 16:47.3, which is a state record for sophomores.

On Nov. 26 in Kenosha, Wis., she placed fourth in the Champs Sports Midwest Regional with a time of 17:37.7 to qualify for nationals.

“It’s really exciting because I’m only a sophomore and it kind of shows what my future’s going to hold if I keep improving and I’m really excited to see what’s going to happen in the future,” Jazwinski said. “Hopefully next year I come back and qualify for this race again and just improve my place and improve my time and stuff like that.”

Don’t be surprised if Jazwinski has company at nationals next fall. Brother Bobby Jazwinski, a 13-year-old Hart eighth-grader, won the Youth 3K Championships by more than 10 seconds in Kenosha, Wis., on the same day his older sister recorded her top-10 finish for the Champs Sports regional. There was no national race for Bobby’s age division, but he’s already setting his sights on the Champs Sports nationals.

Jessica and Bobby Jazwinski, the elder of the Jazwinskis’ four children, are training partners and they’re inseparable. “They actually wish they were twins,” Katie Jazwinski said.

In many of her children’s cross-country races, Katie Jazwinski will run alongside them during stretches while also recording video of them. That was a little tricky at Balboa Park with areas of the course fenced off, but Katie did her best.

“It was crazy. We did see her on a lot of spots, but they had the whole course fenced in,” Katie Jazwinski said. “At one point, I actually got caught in the wrong spot and was, like, hopping over fences (and ropes) and getting yelled at and stuff. Bob was way at the top of ‘The Hill,’ which was a totally different spot than I was, and so both of us were getting different videos and different views of everything.”

From the moment the Jazwinskis arrived in California Wednesday night through the parade of athletes and race Saturday and the time they spent together afterwards, Katie Jazwinski called it a “great experience.”

“It’s been super exciting. Like I said, I’ve never been to this type of thing before and everyone’s so nice. Everyone’s going through the hard work and hard training. Everyone’s going for the same goal to try and win the race and do their best. It was just so exciting because I didn’t know any of these girls before and I got to know them and everyone is so sweet,” she said.

“I’m so happy. I’m really grateful for this experience because it’s been really fun and I really hope that next year I get to have a wonderful time again and quality for this amazing event.”