Week 9 picks from the CatchMark SportsNet crew as 2022 regular season comes to a close. 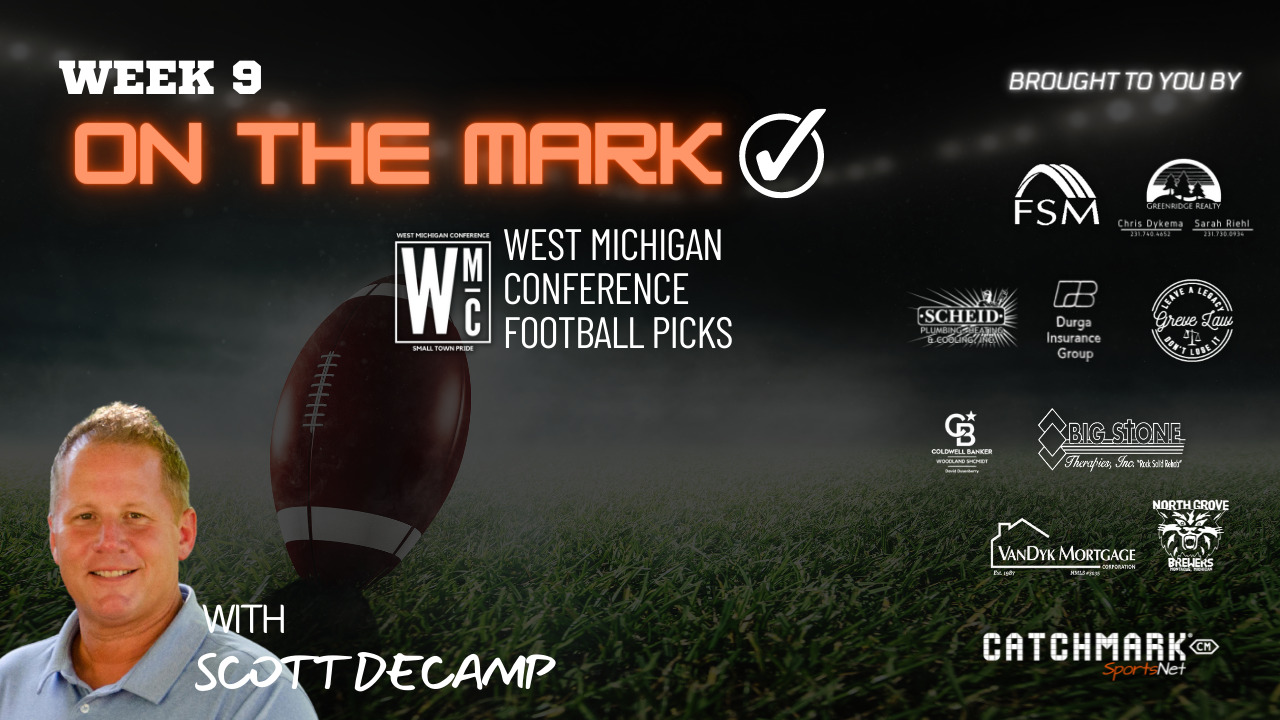 A little after 9 p.m. this Friday, the first official football season of the expanded West Michigan Conference will be in the books.

For some teams, it will be time to store the equipment until next summer. For others, it will mark the start of the “second season” — the playoffs.

To be fair, you’d have to say the 2022 West Michigan Conference football season is a bit of a mixed bag.

On the downside: Cancellations caused by a lack of healthy players (four in three weeks) have been a bummer for all involved. Orchard View canceled its final three games, a tough thing for the Cardinals’ seniors especially and for their program as well as for their opponents.

On the plus side, Whitehall and North Muskegon have proven worthy champions. Some will make the case that this is the best Vikings team of all time. They are 9-0 in the regular season for the first time since 1998 after taking a forfeit win over OV this week. It’ll be exciting to see how the rest of Whitehall’s storybook season plays out.

Hart also has been a great story with its best season in three decades.

With the new divisional alignments in the conference, we missed out on a couple of traditionally good matchups. Would have been fun to see a Whitehall-North Muskegon showdown, even though the Vikings would’ve been heavy favorites in that one. As for North Muskegon-Oakridge, that one could have been mighty intriguing.

Just some thoughts off the top of my head.

Oakridge (7-1, 4-1 WMC Lakes) at Montague (3-5, 2-3 WMC Lakes), 7 p.m. Friday, North Grove Brewers WMC Game of the Week: This is the final Game of the Week of the 2022 football season. CatchMark SportsNet will produce a free livestream as part of our comprehensive coverage.

The Eagles and Wildcats have played some absolute dandies over the years – some of the best that the West Michigan Conference has to offer. Those programs have been the class of the conference over the past decade-plus.

Not sure what to expect this time, however. While Oakridge has been steady as ever, Montague has hit some bumps in the road this season. The Eagles are cruising toward the playoffs, while it looks like the Wildcats should get in even if they lose this Week 9 contest.

Montague has surprised us before. Nobody really saw last year’s 33-7 dismantling of Oakridge coming, but with that the Wildcats essentially created a three-way atop the WMC standings along with Whitehall.

Can the Wildcats find a way again? Or will the Eagles be too much?

Mason County Central (3-5) at Ludington (6-2), 7 p.m. Friday: The Orioles and Spartans renew their rivalry after not playing each other the last two years. Ludington has won the last four in the series.

MCC is on a two-game winning streak and the Spartans have played some pretty good football the last month. A win here, however, could make their season.

On the other side, Ludington was idle last week after taking a forfeit win from the Orchard View matchup. The week before, the Orioles ran into the Whitehall buzzsaw. They’ll be looking to finish the regular season strong with a win over the neighboring rival and carry a little momentum into the playoffs.

Manistee coach Troy Bytwork said the Chippewas have practiced well the past couple weeks and that has shown up on the field, including in an eye-opening 50-20 victory over Montague last Friday. Manistee is trying to ride that momentum into the playoffs.

On the other side, Fremont has lost three of its last four games against the teeth of the WMC Lakes Division: Whitehall, Oakridge and Montague. As Packers coach Jared Hudson and seniors Justin Dirheimer and Michael Romero stated on this week’s Coaches Show, they just want to get a victory and finish with a winning record. It would be Fremont’s first winning season since 2013.

Some argue that the Norsemen already have the outright title clinched, since they won head-to-head matchups with Hart and Ravenna, teams that enter Friday night one game behind North Muskegon in the standings.

In talking with an athletic administrator from the conference, however, he states that if teams tie atop the divisional standings, then they share the title regardless of head-to-head outcomes. Take it for what it’s worth.

None of this should matter anyway. North Muskegon should take care of business, even after being idle last week.

Hart (6-2, 4-1 WMC Rivers) at Ravenna (5-3, 4-1 WMC Rivers), 7 p.m. Friday: Some signs seem to be pointing in the Pirates’ direction: They have momentum, while the Bulldogs are skidding a bit after have encountering roadblocks the last two weeks against tough North Muskegon and Oakridge opponents.

History is on Ravenna’s side, however: Hart has not beaten the Bulldogs since 1992 and most of those outcomes have been in blowout fashion.

This is not officially the Game of the Week, but it’s certainly got the potential to be the game of the night in the conference. On paper, this game could go either way.

It’s Senior Night in Ravenna. What do Hunter Hogan & Co. have in store?

Holton and Hesperia have split their last eight meetings. Last season, in their final year as Central State Activities Association members, the Red Devils put one on the Panthers, 56-12.

Look for Hesperia to get the upper hand this time as first-year West Michigan Conference members.