On the Mark: Time for West Michigan Conference’s ‘battle-tested’ teams to perform

The playoffs are here and the CatchMark SportsNet crew has the first-round picks. 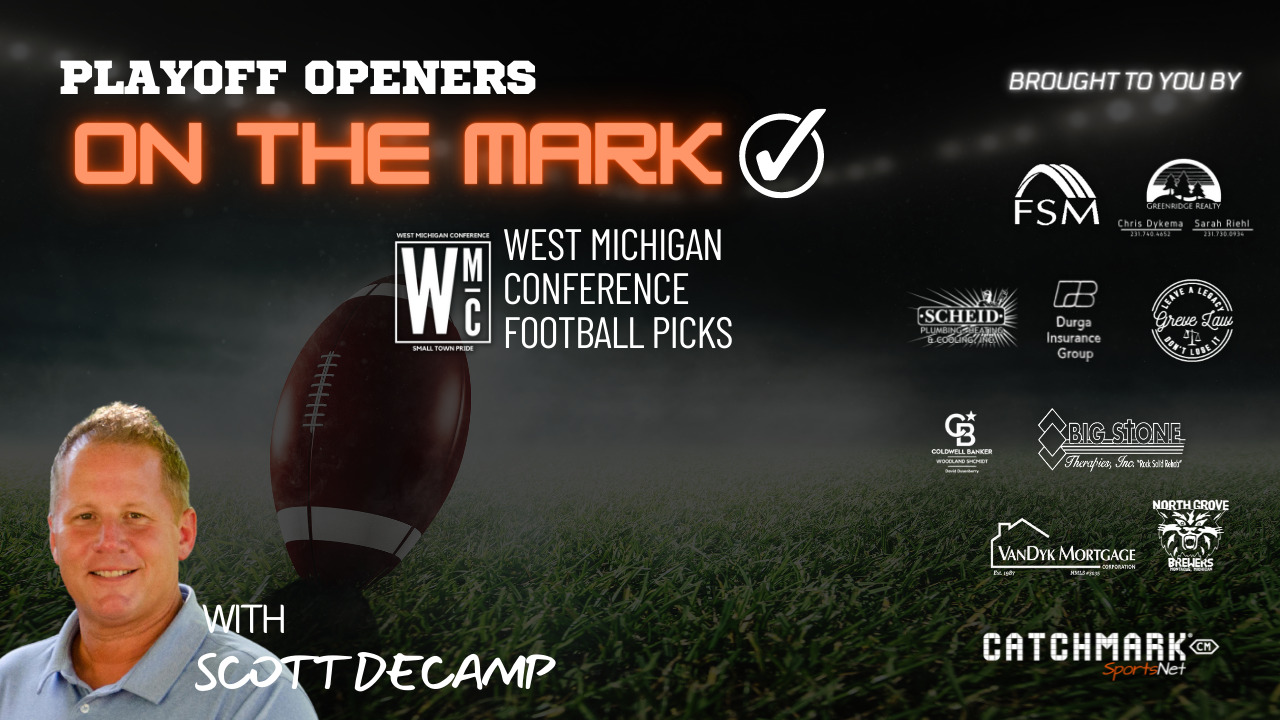 This time of year, you’ll hear the term “battle-tested” quite a bit.

You’ll certainly see it come up at least a couple times below in “DeCamp’s Dissection” for this week’s “On the Mark” column, first-round playoff edition.

For years, the West Michigan Conference has been a deep league that’s prepared its football teams for strong postseason runs. The dynamic of the conference changed a bit this school year, going from eight members to 14, but the traditional powers remain and a couple newcomers are hoping that the regular-season grind pays off for them, too, in the playoffs.

(I’m looking at you, Manistee.)

We at CatchMark SportsNet are excited for the playoffs and we’re prepared to document all of it as long as the West Michigan Conference is represented. One way or another, all six postseason games this week will be covered by our crew and our friends.

Without further ado, here are the “On the Mark” picks for our panelists. We welcome Trent Alphenaar, who did great camera and drone work during our North Grove Brewers WMC Game of the Week livestreams, as guest picker.

The Vikings have waited a while for a season like this, the first 9-0 campaign since 1998. And they’ve waited a while to take the field again after their regular-season finale against Orchard View was canceled because of a lack of healthy players in the Cardinals program. This Friday will mark 14 days since the Vikings’ last time suiting up for a game.

Expectations are sky-high for Whitehall. Now it’s up to the Vikings to manage those lofty goals while staying focused and mentally strong as each opponent takes its shot. Carrying the No. 1 or No. 2 ranking in Division 4 in certain publications throughout most of the season comes with pressure: You get everybody’s best shot.

Big Rapids is the first playoff opponent standing in Whitehall’s way. The Cardinals shared the Central State Activities Association Gold Division title with Reed City and Howard City Tri County. In their two losses, they’ve given up some points – 42-19 against Coopersville in Week 1 and 52-32 against Reed City in Week 4. Whitehall will be a different animal than those opponents for Big Rapids.

If you can’t make it to this game, then be sure to pick up CatchMark SportsNet’s free live audio stream. Our Jon Russell and Cal VanSingel will be calling the game. The link is a couple lines below.

Ludington (7-2) at Fruitport (7-2), 7 p.m. Friday, Division 4 first-round game: Ludington and Fruitport have a long history as Seaway, Western Waterways and Lakes 8 opponents. Going back to 1968, most of the matchups have turned out in Fruitport’s favor, to the tune of a 37-6-2 ledger in the series.

As a new member to the West Michigan Conference, Ludington has turned in a strong season. The Orioles’ lone losses have come against Whitehall (56-6 in Week 7) and Oakridge (30-18 in Week 4), the top two teams in the Lakes Division.

Meanwhile, Fruitport has exceeded nearly all expectations. Did anybody predict the Trojans winning a share of the OK Blue Conference title, beating co-champ Grand Rapids West Catholic along the way?

Ludington hung tough in the Oakridge game, staying within 14-12 into the fourth quarter. The Orioles will need that kind of toughness to go toe-to-toe against a talented and confident Trojans squad and contain the Jolman brothers.

Shepherd (6-3) at Oakridge (8-1), 7 p.m. Friday, Division 5 first-round game: Oakridge is on a roll. In its last two weeks, the Eagles have beaten traditional rivals Montague and Ravenna by a combined 93-13 tally.

Really, Oakridge has been good all season. The Eagles’ lone blemish was a 42-8 loss to an exceptionally strong Whitehall squad in Week 6. They’re battle-tested, as seven of their nine regular-season opponents have punched tickets to the playoffs: Sparta, Muskegon Catholic Central, Manistee, Ludington, Whitehall, Ravenna and Montague.

Shepherd has seen some worthy opponents as well, notably unbeaten Gladwin in Week 3 (54-0 loss) and one-loss Ithaca in Week 9 (21-7 defeat). The Bluejays just haven’t faced the week-after-week gauntlet like the Eagles.

Players and coaches can’t afford to look ahead, but we can. And if you do look ahead, we just might see a matchup between Oakridge and Gladwin in the regional finals. And good news for Oakridge: That one would be at home, just like the first two rounds of the playoffs, should the Eagles keep on winning.

It’s asking a lot for Shepherd to make the 93-mile, one-way trip to Russell A. Erickson Stadium and compete with Oakridge for four quarters.

Montague (3-6) at Reed City (8-1), 7 p.m. Friday, Division 6 first-round game: It’s been one of those seasons for Montague, which has shown flashes of strong play but struggled to sustain it.

Fortunately for the Wildcats, they can wipe the slate clean and welcome in this “new season” called the playoffs. Unfortunately, they have a tough first-round draw, having to hit the road and face a traditionally strong Reed City squad.

Montague is 11-1 all-time vs. Reed City. None of those previous games really matter except for maybe the Wildcats’ 35-22 victory over the Coyotes in the district finals last year on Reed City’s field. Both teams are sure to remember that game and it could certainly play a factor motivationally.

Record-wise, this is Montague’s worst season in eight years, but look a little deeper: The Wildcats are battle-tested as all six of the opponents that beat them in the regular season are competing in the playoffs: Ravenna, Whitehall, Ludington, North Muskegon, Manistee and Oakridge.

Reed City, which earned a share of the Central State Activities Association Gold Division title, is cut from the same cloth as the aforementioned squads to have beaten Montague this season. It will be a tough one for Montague.

If you can’t make it to this game, then be sure to pick up CatchMark SportsNet’s free live audio stream. Our Tate Stine and Conner Raeth will be calling the game. The link is a couple lines below.

This is a good Chippewas team and a different one over the last few weeks of the season. After taking some lumps in the middle of the schedule, they’ve hit their stride.

This is one of the more intriguing playoff openers among the slate of games involving WMC teams. If Manistee were to lose this game, then it won’t be because the Chippewas weren’t prepared for it. Facing the likes of Whitehall, Oakridge, Ludington and Montague should serve the Chips well in a game like this.

Boyne City is unbeaten and, more impressively, the Ramblers have allowed 26 total points in the last seven weeks of the season. They did surrender 63 points combined in wins over Benzie Central and Cheboygan in Weeks 1 and 2.

Manistee should be able to hold its own up front, as that’s been a strength for the Chippewas. The keys are dealing with Boyne City’s speed and passing game.

This is my “upset special.”

Ravenna (6-3) at North Muskegon (8-1), 7 p.m. Friday, Division 7 first-round game: For the second time in as many years, these rivals are getting a rematch in the first round of the playoffs just three weeks after the regular-season clash.

Last season, Ravenna won 17-6 on North Muskegon’s field in Week 7, then the Bulldogs turned around a few weeks later and earned a hard-fought 7-6 victory over the Norsemen in the first round of the Division 7 playoffs.

Three weeks ago, North Muskegon won 28-7 on its home field over Ravenna in the North Grove Brewers WMC Game of the Week. Now, the Norse are setting their sights on a season sweep of the ’Dogs as they clash again in a Division 7 playoff opener at Fred Jacks Memorial Field.

North Muskegon has the WMC Rivers Division outright title in hand. The Norse are seeking more hardware and this is a challenging first step, trying to beat a tough Ravenna opponent for the second time in a month’s span. They have a bevy of playmakers in an attack engineered by James Young. The Bulldogs have a lot of pride and, of course, do-everything Hunter Hogan on their side.

If you can’t make it to this game, then be sure to pick up CatchMark SportsNet’s free live audio stream. Our Brent Raeth and Billy Mann will be calling the game. The link is a couple lines below.