On the Mark: It’s getting serious for West Michigan Conference playoff teams

Trophy games have arrived, as four squads from the league play for district titles in 2022 postseason. 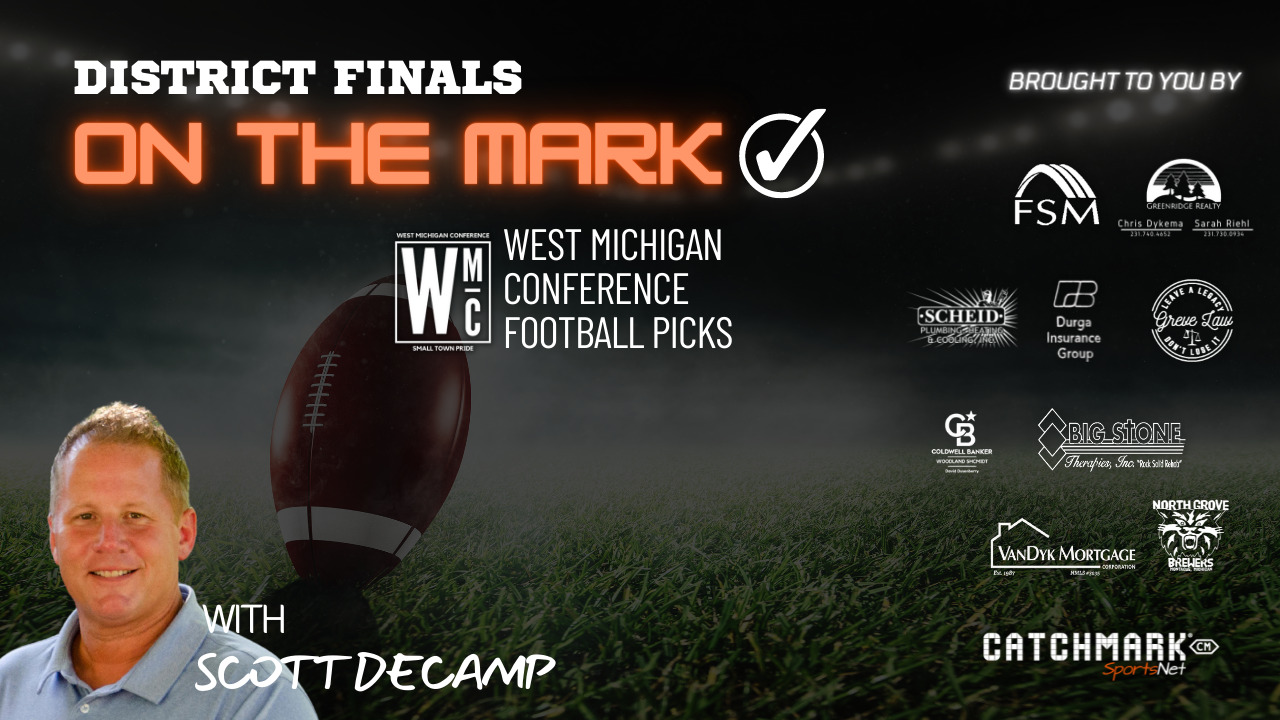 Four of the seven West Michigan Conference football teams that qualified for the 2022 Michigan High School Athletic Association playoffs have advanced to the district finals round.

Things are starting to get serious. Trophies are now at stake.

All of their games are important – anytime you can seize hardware, it’s a big game. But none have as much hype surrounding them as the Whitehall-Fruitport showdown Friday night at Whitehall’s field. That’s a huge matchup Muskegon County-wide and perhaps one of the more appealing contests statewide this week.

Both teams seem to score at will. Whose defense can get the job done?

Speaking of defense, the guest picker for “On the Mark” this week knows a lot about that in the cyber space. Brian Sibary, cyber security specialist for CatchMark Technologies, joins us.

That said, here are this week’s picks:

Fruitport (8-2) at Whitehall (10-0), 7 p.m. Friday, Division 4 district final: While not officially the game of the week by CatchMark SportsNet – that ended at the conclusion of the regular season – you could easily make a case that this long-anticipated matchup warrants such a distinction.

Speed and playmaking should be on full display. Both teams have plenty of both, weather permitting. Whitehall is averaging 50.7 points per game, while Fruitport is at 42.7.

Both teams have faced their share of tests: Whitehall has taken on seven playoff opponents entering this game, while Fruitport has faced five. Both teams are rolling: Whitehall with 10 straight wins, Fruitport with six in a row.

The Vikings and Trojans have two common opponents: Whitehall defeated Unity Christian in the season opener (54-26) and Ludington in Week 7 (56-6), while Fruitport fell to Unity in Week 4 (60-46) and beat Ludington in a playoff opener (54-28).

Safe to say, these are the best versions of Fruitport and Whitehall in years. This will be a hard-hitting, emotional game and highly charged environment. The difference, as it showed against Oakridge, will be Whitehall’s defense.

Belding (9-1) at Oakridge (9-1), 7 p.m. Friday, Division 5 district final: Very few programs in Division 5 boast the consistency or tradition of Oakridge, which has made the playoffs 31 of the last 33 years, including each of the last 18 seasons. The Eagles know what it takes to compete for district titles. They’re going for their third straight and fourth in six years.

Along comes Belding, which sports its own rich tradition going back to Hall of Fame coach Irv Sigler and the days of the wing-T and state championships in the 1990s, known then as the Redskins.

Now, Belding is known as the Black Knights and they’re guided by Monty Price, who was highly successful at Reed City. He took over at Belding in 2019.

On paper, the Black Knights are enjoying their program’s best season since 1998, when Belding lost a shootout to Chesaning in the Class B state finals and finished with a 12-1 record. The OK Silver champions’ lone loss this season came in nonleague play, a 24-6 setback to Division 3 Cadillac in Week 7.

Oakridge is led by a Hall of Fame coach, Cary Harger, and he has another strong group. Make no mistake, the Eagles like to pound the rock with rugged junior Trever Jones, but they can also keep you honest in the passing attack engineered by senior quarterback Matt Danicek. Those things, combined with playing at home, may make them too tough for Belding to stop.

Manistee (7-3) at Gladstone (8-2), 7 p.m. Friday, Division 6 district final: Last week, Manistee was my “upset special,” although the Chippewas’ 28-27 first-round playoff victory at previously unbeaten Boyne City was not much of an upset. In record, yes, but not if you were to examine both teams’ resumes.

As stated multiple times before, Manistee is battle-tested from playing a tough schedule in the West Michigan Conference Lakes Division. On the field, a lot of what the Chippewas have seen should prepare them for what they’ll see against Gladstone at Marble Athletic Field.

How will the Chips handle the 5 ½-hour trip to the U.P.? Last week, they handled their two-plus-hour trip to Boyne City quite well, obviously.

This time of year, preparation, execution of the game plan, mental toughness and handling adversity are all necessary in order to survive and advance.

Manistee appears to be in a good spot from that perspective. Also, the Chippewas seem to be playing with house money. Few people, outside of their locker room and their fans, expected the Chips to be in this position. Might as well win their program’s first-ever district title now.

This time, it’s for the district title and the Bulldogs should be better equipped to compete. The ’Dogs are playing their best football of the season it seems, coming off an especially impressive defensive performance in holding down North Muskegon’s explosive offense in a 10-7 playoff-opening victory on the road.

It won’t be easy. Ithaca is bigger and possibly stronger than North Muskegon while still bringing a lot of talent to the table. It starts with Bronson Bupp, the Yellowjackets’ 6-foot-3, 209-pound dual-threat senior quarterback.

Ithaca Community Stadium is an absolute gem – unlike most that you’ve seen at this level of high school football – and the Yellowjackets’ program boasts one of the best traditions in the state.

This is probably going to require the best game of the year from Hunter Hogan & Co. for Ravenna to pull off the upset. Can the ’Dogs do it two weeks in a row?

On the Mark: Time for West Michigan Conference’s ‘battle-tested’ teams to perform
On the Mark: One heck of a journey for Whitehall, Oakridge – let’s keep it going