On the Mark: One heck of a journey for Whitehall, Oakridge – let’s keep it going

Huge regional finals matchups for Vikings and Eagles, but remember to savor all of these moments. 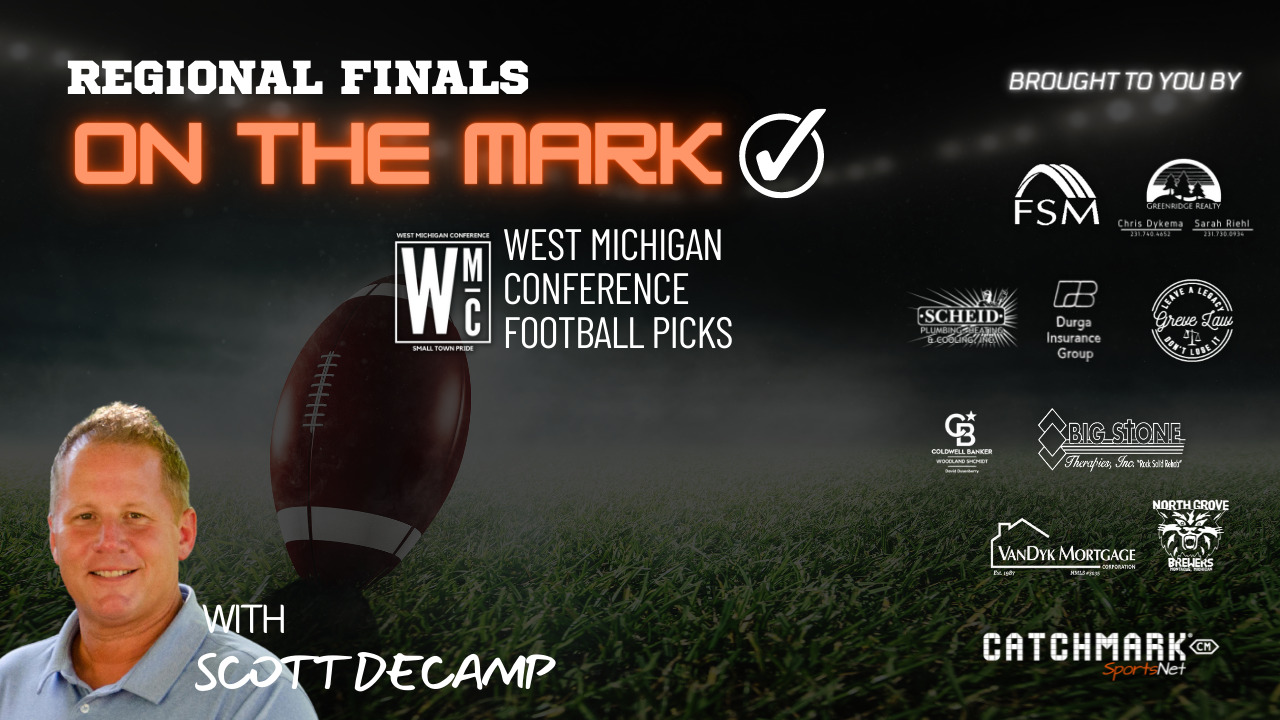 At the expense of sounding like a teenage girl (no offense to teenage females anywhere; I have two of them at home), I’m absolutely “giddy” for this weekend’s regional championship games for Whitehall’s and Oakridge’s football teams.

Does it really get any better than these matchups? Whitehall vs. Grand Rapids South Christian in a battle of unbeatens and top two ranked teams in Division 4 on Friday night; fifth-ranked Oakridge hosting undefeated, third-ranked Gladwin on Saturday afternoon.

As strange as it may sound, yes, it does get better. Thanks to Whitehall coach Tony Sigmon for that reminder.

Following Whitehall’s district finals win over Fruitport last Friday – the Vikings’ first district crown since 2014 — Sigmon pointed out that the best thing in all of this was the players and coaches getting to return to practice the following Monday and be together again. Manistee coach Troy Bytwork echoed that sentiment after the Chippewas’ district finals loss at Gladstone last Friday. Only difference is, the Chips did not get that opportunity to reunite on Monday in the same way because their season had come to an end.

Here’s the point: As much as we all tend to get wrapped up in the destination, what really matters is the journey. That’s what life is about. It’s about savoring moments and making memories.

The little things ARE the big things. It’s Whitehall’s football team practicing under the lights twice this week on the turf at Holton’s Red Devil Stadium with not a soul around – just the Vikings football family, being together. Same goes for Oakridge’s squad and the Eagles’ practices on their home turf this week.

It’s so easy to overlook those things because we’re so focused on the end product, but we all need that reminder from time to time: Enjoy the journey.

Whitehall and Oakridge both have opportunities to extend their seasons and assure themselves of another practice on Monday, another week of being together with their respective football families.

The Vikings and Eagles are focused on the prize – regional trophies – but here’s to hoping that they also remember to enjoy all the moments that come with it.

Well, guess that’s enough of the inspirational or sappy stuff. Back to being “giddy.”

Below are “On the Mark” picks for the regional finals involving West Michigan Conference teams. Our guest picker this week is Bryce Raeth, a structured cable technician for CatchMark Technologies and Montague alumnus, who is blue-collar and knows what it means to be a team player.

Whitehall (11-0) vs. Grand Rapids South Christian (11-0), 7 p.m. Friday, Division 4 regional final at East Kentwood’s Falcon Stadium: With all due respect to the other six teams remaining in the Division 4 playoffs, it’s a shame this matchup could not happen in the state finals at Ford Field on Thanksgiving weekend. Some are calling this No. 1 vs. No. 2 battle of unbeatens the de facto state championship.

South Christian has been No. 1 and Whitehall No. 2 pretty much all season in The Associated Press polls. Meanwhile, their rankings have been flipped for weeks in the Michigan High School Football Coaches Association state rankings with the Vikings holding down the top spot and Sailors right behind them.

This matchup is a high school football fan’s delight. But trust me when I say that Whitehall coach Tony Sigmon, while supremely confident in his team, is not getting swept away by the hyperbole of the showdown. He knows the only things that matter come Friday night are effort, execution and focus when his Vikings line up against the perennial power Sailors at beautiful Falcon Stadium.

South Christian has been here before. The Sailors have lost to Edwardsburg in each of the last two regional finals. Meanwhile, Whitehall has not been to a regional final since 2014 and the Vikings have never won one.

In 2014, Sigmon’s second season at the helm, Jon Wassink-led South Christian smacked Whitehall, 49-14, at Byron Center. That Sailors team went on to capture a state championship. Wassink went on to become a successful starting quarterback and team captain at Western Michigan University.

South has another dynamic QB in 6-foot-2, 190-pound senior Jake DeHaan, who has passed for more than 2,300 yards with 27 touchdowns and rushed for nearly 1,000 and 15 more scores in a wide-open offensive attack. The Sailors have athletes and length. They also have the best win among these two teams in the form of a 36-34 victory over juggernaut Grand Rapids Catholic Central in Week 6.

However … much like the hype surrounding this game, none of that matters. All that matters Friday night is what plays out on the field and Whitehall has answered the bell every single time this season, each time in resounding fashion. The Vikings have outscored their 10 opponents by a combined 507-122 margin. (Week 9 was a forfeit win over Orchard View.)

This is not the same Whitehall team that South Christian pushed around eight years ago. This Vikings squad is big, fast, physical, strong and confident. This Whitehall coaching staff has learned some lessons in the years since Wassink ran up and down the field for South in that regional final in ’14.

Whitehall may not have the “playoff pedigree” of a South Christian, but every true contender has to earn that breakthrough win at some point, right? The time is now for the Vikings.

Enough of the talk. Let’s line ’em up and play this game.

Gladwin (11-0) at Oakridge (10-1), 2 p.m. Saturday, Division 5 regional final: It’s been said this is potentially the best team to ever come from Gladwin. Last week, the Flying G’s crushed Kingsford, 59-25, en route to the program’s first district title since 2000. This Saturday, the “G’s” are aiming for their first regional championship since 1998.

Looking at Gladwin’s schedule, the most impressive wins appear to be a 33-27 road triumph over Pontiac Notre Dame Prep in Week 7 and a 35-7 victory over Standish-Sterling in Week 9. Mind you, that’s the same Standish-Stering team that handed Ithaca its lone loss, 31-27, in Week 2 at Ithaca.

In terms of common opponents, Oakridge and Gladwin have one: Shepherd. The Eagles blanked Shepherd, 32-0, in the playoff opener; the Flying G’s throttled the Bluejays, 54-0, in a Jack Pine Conference game in Week 3.

While this is a season and a team for Gladwin that comes around only so often, Oakridge is a model of consistency and has been there, done that when it comes to playing dominant football and making deep playoff runs. The Eagles are no slouches, either, when it comes to the weight room.

Earning this game at home is certainly an advantage for Oakridge. Gladwin has to make a 2 ½-hour trek southwest to Muskegon. That aside, it’s really looking like the Eagles could be pushed like they haven’t been pushed since the 42-8 home loss to a powerhouse Whitehall team in Week 6.

This is Oakridge’s third-straight regional finals appearance, having lost to Grand Rapids Catholic Central each of the last two seasons. (The winner of this game very likely gets GRCC in the semifinals.) The Eagles are seeking their first regional championship since 2013.

Oakridge could hoist another regional trophy Saturday, but the Eagles are really going to have to work for it. By all accounts, this Gladwin team is no joke. The Oakridge boys need to bring it.

On the Mark: It’s getting serious for West Michigan Conference playoff teams