The poll will remain open until noon on Friday, Jan. 20. 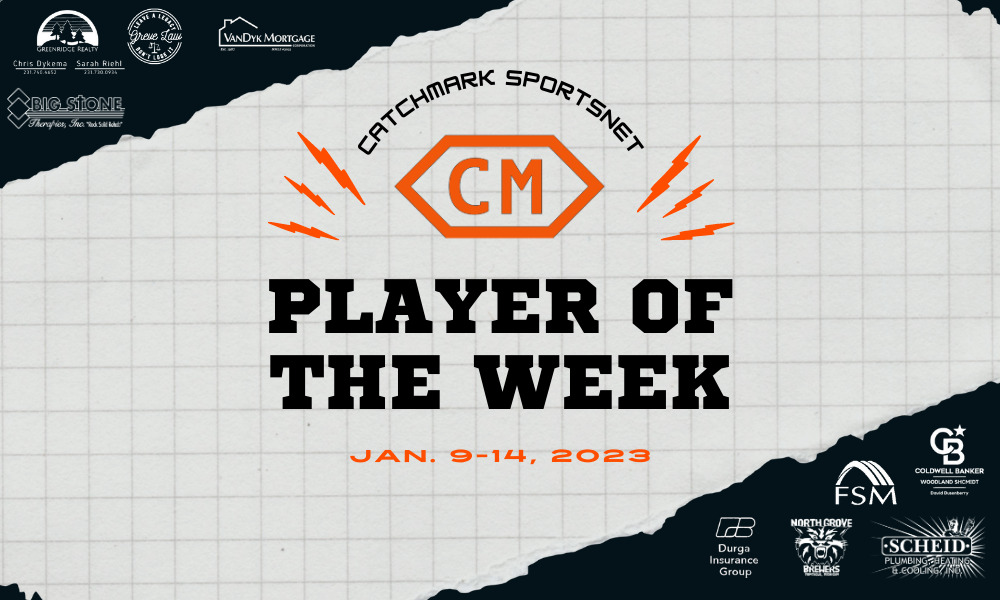 The West Michigan Conference’s 2022-23 winter sports season continues to cruise along and CatchMark SportsNet is pleased to highlight the athletes and top performances.

One way we do that is with the Player of the Year fan poll.

It’s time to recognize six nominees who shined during the week of Jan. 9-14, 2023. It’s time for you to vote for the Player of the Week.

The poll can be found at the bottom of this story after brief capsules on the nominees. Voting is open and will continue until noon on Friday, Jan. 20.

The sophomore tumbler helped the Pirates perform extremely well in a pair of events last week. Hart took first place in the first competitive cheer meet of the expanded West Michigan Conference last Wednesday, as the Pirates totaled 661.88 points. On Saturday, Hart set a program record with 730.02 points in dominating at the Ludington invite. Hart coach Jen Hlady said that Chickering is in all three rounds and she’s a standout athlete on the mat, performing all of the Pirates’ tumble passes in Round 3.

The 6-foot-2 senior guard reached the 1,000-point milestone for his career in last Tuesday’s 66-50 nonleague home win over White Cloud. In that game, Chye scored 12 points to go along with eight rebounds and five assists. In Thursday’s 71-50 home loss to Hart, he led the Spartans with 13 points and had eight rebounds and two assists.

The 6-foot-2 junior power forward had two monster games for the Eagles, who carried a six-game winning streak into this week. In Tuesday’s 44-27 home win over Muskegon Catholic Central, Lundquist posted 22 points and 14 rebounds. In Friday’s 45-25 road victory over Montague, she packed the stat sheet with 17 points, 17 rebounds, four blocks and three steals.

The junior was one of Whitehall’s four unbeaten wrestlers on the day Saturday as the Vikings finished 4-1 as a team at the Rockford Duals. At 144 pounds, he pinned St. Joseph’s Gavin Keller in 45 seconds, defeated Rockford’s Brody Anderson by tech fall (17-2) and posted a major decision over Thornapple Kellogg’s Andrew Middleton (1-3). At 150, Mack pinned Edwardsburg’s Jayden Slough in 35 seconds and pinned Rockford’s Nathan Westcott in one minute.

The 6-foot-5 junior forward was a big reason the Pirates posted a runaway victory over host Mason County Central last Thursday in a battle of unbeatens and West Michigan Conference Rivers Division title contenders. Weirich scored a game-high 27 points and he grabbed 11 rebounds in Hart’s 71-50 triumph. He and senior Parker Hovey form a tough 1-2 punch for the Pirates.

This is the second-straight appearance in the Player of the Week poll for Winkleblack, who finished runner-up to Hart basketball player Aspen Boutell last week. Winkleblack, a Montague junior, captured her fourth straight tournament championship Saturday in the Grand Rapids Northview invite. Entering this week, the 110-pound wrestler boasts an 18-1 overall record (13-0 vs. females) with 12 pins.