The poll will stay open until noon on Friday, Nov. 4. 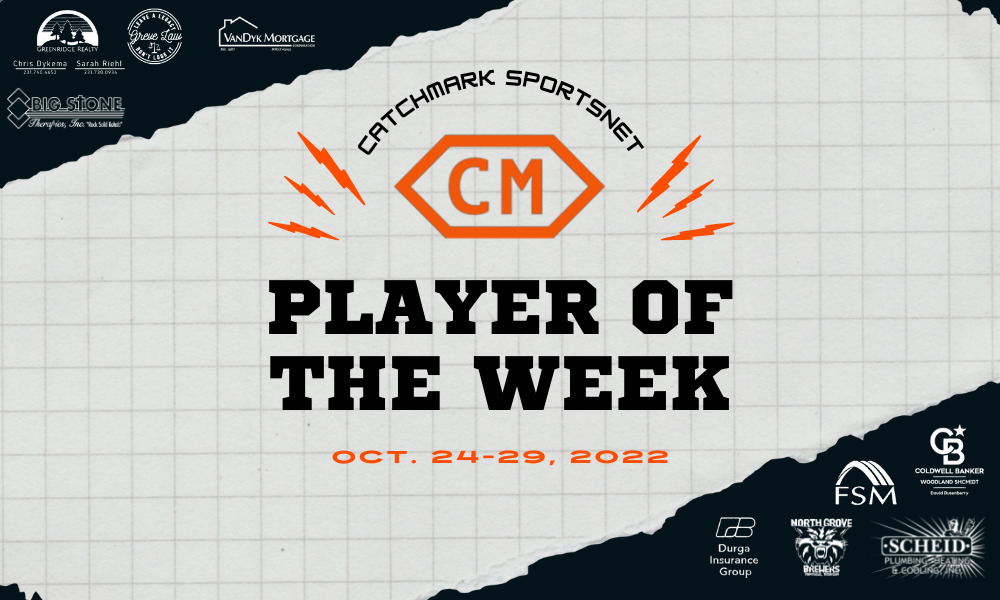 History was made last week in the CatchMark SportsNet Player of the Week fan poll.

For the first time, the poll ended up in a tie. Volleyball players Navea Gauthier of Shelby and Keelyn Laird of Ludington both finished with 513 votes.

How can that be topped this week? Well, hopefully the votes come rolling in as they have all season long.

This is the 10th edition of the CatchMark SportsNet Player of the Week fan poll for 2022 fall sports in the West Michigan Conference. Let’s recognize the latest batch of nominees based upon athletic events in the conference spanning Oct. 24-29.

The poll can be found at the bottom of this story after brief capsules on the six nominees. Voting is open and will continue until noon on Friday, Nov. 4.

The 6-foot-3, 180-pound junior provided a big spark for the Vikings in their 42-12 victory over Big Rapids Friday in a Division 4 first-round playoff game. Both of Aylor’s receptions went for touchdowns, the first covering 49 yards just before the half and the second for 42 yards to put it away in the fourth quarter. He also returned the second-half kickoff 93 yards for a momentum boost.

Sophomore Jessica Jazwinski is the No. 1 runner for Hart and she led the way again last week with two first-place finishes, including in a Division 3 regional at Remus Chippewa Hills. But Enns is typically not too far behind. During that regional race on Friday, the junior finished second with a time of 18:27.4. Along with Jazwinski, Enns looks to lead the Pirates in their pursuit of a sixth-straight Division 3 state title,.

The 5-foot-9, 175-pound do-it-all senior carried the Bulldogs on his back en route to a 10-7 win over rival North Muskegon in a Division 7 first-round playoff game Friday. Hogan accounted for all of the Bulldogs’ points: The quarterback scored on a 30-yard touchdown run, kicked the PAT and later booted a 23-yard field goal that proved the difference. He also notched 7.5 tackles from his free-safety spot.

The 6-foot-1, 185-pound junior had another monster game for the Eagles in their 32-0 victory over Shepherd Friday in a Division 5 first-round playoff matchup. Jones scored all four of his team’s touchdowns and he racked up 263 yards on 26 carries. He also led Oakridge defensively with nine tackles.

The Vikings senior turned in a season-best time in a Division 2 regional Friday at Remus Chippewa Hills. Treat finished in 19:24.9 to place sixth individually and punch her ticket to the Michigan High School Athletic Association state championships this Saturday at Michigan International Speedway in Brooklyn.