The poll will remain open until noon on Friday, Sept. 23. 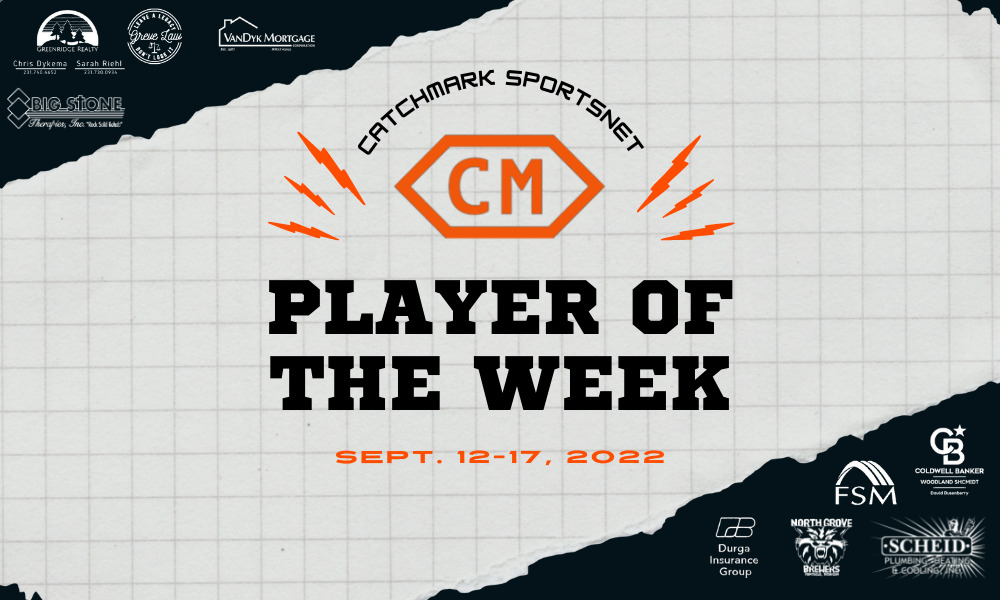 It’s the fourth edition of the 2022 CatchMark SportsNet Player of the Week series.

Can fan poll numbers surpass those from Week 3, when more than 30,000 votes were cast in a race driven by volleyball players from Montague and North Muskegon?

It’s time to recognize the next batch of nominees, based upon athletic events spanning Sept. 12-17, 2022.

The poll can be found at the bottom of this story after brief capsules on the six nominees. Voting is open and will continue until noon on Friday, Sept. 23. You may vote once per hour.

The 5-foot-10 senior setter totaled 122 assists and 23 aces during a very busy week for the Packers. Fremont traveled to Cadillac on Monday and lost three matches, then picked up a West Michigan Conference win over Manistee Tuesday and three-match sweep in a quad Thursday at Ravenna, before heading back to Cadillac and going 1-2. Entering this week, Bruggema has totaled 286 assists, 117 digs, 76 kills, 36 aces and 12 blocks on the season. Fremont carries a 13-14-2 overall record into this week.

The 5-foot-10 senior outside hitter helped the Pirates capture the title at the Onekama Invitational on Saturday (Sept. 17). Chickering totaled 29 kills, 11 digs, 10 aces, four blocks and two assists. Hart defeated Lake Leelanau St. Mary in the championship match, 25-23, 22-25, 15-10. The Pirates were 3-0-2 on the day and they sit 10-2-3 overall entering this week. In a loss to North Muskegon last Wednesday (Sept. 14), Chickering had nine kills and one dig.

North Muskegon enjoyed a strong week and Lasser was a big reason why. The sophomore forward scored both goals in the Norsemen’s 2-1 win at Oakridge on Monday. On Wednesday, Lasser netted two more goals and had an assist as the Norse defeated visiting Fremont, 4-1. North Muskegon entered this week 4-7-2 overall and 2-2-1 in the West Michigan Conference.

The Orioles junior shot 37 to lead her team to a 20-shot victory in a West Michigan Conference jamboree Wednesday at Lincoln Hills Golf Club in Ludington. The Orioles shot 177 as a team, finishing ahead of Montague (197), Whitehall (200), Fremont (216), Oakridge (224), North Muskegon (230), Manistee (246) and Holton (262). Thursday at Old Channel Trail, McKinley shot 78 to tie for third place in the Montague Invitational. Ludington took third as a team with a score of 362.

The sophomore teamed with Luke Toebe to win three matches at No. 3 doubles last week, including an inspiring 6-3, 6-3 victory last Monday (Sept. 12) that lifted North Muskegon past Grant, 5-3. Pannucci has been battling leukemia for about two years. He underwent chemotherapy the morning of the match and did not feel well, but he was determined to play his tennis match. “He’s usually really tired after these treatments and said that it hurts his back and hands badly,” North Muskegon coach Cody Liverance said. “(The match vs. Grant) ended up being the last match on the court with us clinging to a 4-3 lead as a team. Tate played the last game in noticeable pain, gritting his teeth and bending over at the waist after every point, but they managed to close out the victory.”

The 5-foot-8, 165-pound junior quarterback got the Vikings off and running in their 60-6 victory over visiting Montague Friday in the “Battle for the Bell” and North Grove Brewers West Michigan Conference Game of the Week. Stratton ran 11 times for a game-high 165 yards and two touchdowns, both in the first quarter, covering 19 and 48 yards. He also went 8-of-18 passing for 149 yards with three TDs and one interception. Whitehall is 4-0 overall and ranked No. 2 in The Associated Press’ Division 4 poll.