CatchMark SportsNet Profile of the Week is sponsored by David Dusenberry of Coldwell Banker. 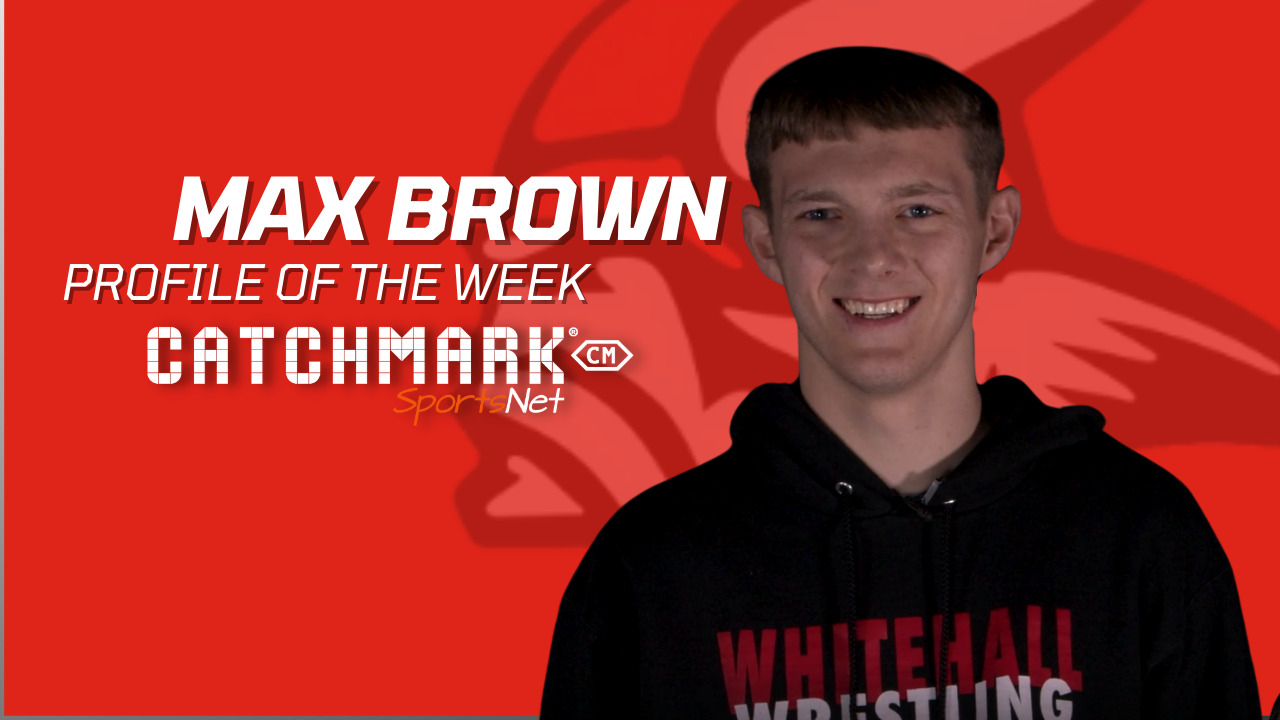 WHITEHALL – The youngest of four brothers, Max Brown is accustomed to fighting for everything he gets.

“It was a scrappy household, for sure,” said the Whitehall senior and son of Sheila and Andy Brown. “Really competitive household – make competition out of who could make their beds faster, who gets the last plate of food for seconds at the table. Being the younger one, I always felt like I got the shorter end of the stick.”

That mentality has served Brown well on the wrestling mat. He is a defending state champion, having captured the Division 3 title at 140 pounds last season. He boasts a career record of 164-15 with 91 pins and three top-four finishes at the state finals.

Brown is seeking another state title this season and he’s hoping to help lead Division 2 second-ranked Whitehall (23-0) back to the team state finals, where the Vikings made school history last season with a D-3 runner-up finish.

“He fights through things,” said Andy Brown, who owns Brown Concrete and has instilled the blue-collar attitude in his sons.

“It’s hard to lose, but everybody loses and it makes you a better person, whether you like it or not. It just shapes you and gets you ready for life in general,” Andy Brown added. “Me, being a small business owner, there’s lots of times where I wanted to quit, but you’ve got to fight through. Wrestling and all that helps.”

On the mat, Max Brown is constantly pushed by Whitehall co-coaches Justin and Collin Zeerip, as well as assistants such as Craig Christensen, not to mention his peers.

Brown also has a tough act to follow in older brother Reiley Brown, who is believed to be Whitehall’s all-time wins leader at 188-13. Reiley Brown captured back-to-back state championships as a junior and senior in 2015 and 2016, respectively, plus he placed second and third in the state his other two seasons as a Viking. He was an eye-popping 55-1 as a senior.

Max Brown finished 36-1 with 18 pins en route to winning the state championship in the 2021 campaign that was abbreviated because of COVID-19. This season, he is 34-5 with 20 pins at 145 pounds. He’s been the top-ranked wrestler in his weight class for Division 2 throughout the season, per Michigan Grappler.

In Saturday’s individual districts at Whitehall, Brown finished runner-up. He pinned his first two opponents in 12 and 14 seconds, respectively, but lost to Zeeland East’s Noah Ledford, 5-2, in the finals.

Brown, who has three district titles and one regional crown under his belt, will look to regroup in next Saturday’s individual regional at Allendale. But, first, he and the Vikings will aim for another team regional title this Wednesday in their home gym.

“One of the main goals is I’m looking to get a good team states run, going there, leave a legacy with the team section,” Max Brown said. “I’ve been a three-year team captain, so that’s always been a big part of wrestling for me. And then just getting that second state title is up there, too.”

Brown, who has a lanky frame at 5-foot-11, describes his wrestling style as “funky.” He said he rolls around and scrambles a lot.

He’s not afraid to mix it up, however. He illustrated that as a starting safety on Whitehall’s football team, using his hard-nosed mentality to help in run support and wiry build to become a punt-blocking specialist.

Brown, who sports a 3.3 grade-point average, plans to pursue a career in teaching and coaching. He would love to return to Whitehall and coach with the Zeerip brothers, giving back to the community that has been good to him.

Brown said he is not sure yet, but he’s considering wrestling in college. He mentioned Grand Valley State University and Muskegon Community College as possible destinations.

Brown came to Whitehall in sixth grade, after he attended Mona Shores with a one-year stop at Western Michigan Christian mixed in there.

It’s been a long journey for Brown, one shared with standout Whitehall teammate Ira Jenkins, among others.

“We’ve both kind of been through this whole process together with, like, national tournaments and stuff like that and going out to SAW (Simmons Academy of Wrestling in Lansing) every Sunday, like two-hour drives there and back, just doing the extra stuff together,” Jenkins recalled. “He’s definitely a hard-working guy, we’re good friends. It’s been cool to do it all with him.”

Jenkins, the University of Michigan signee, is 173-11 in his Whitehall career. He dominated last year and went undefeated in rolling to the 215-pound state title, and he’s unbeaten this season at 285.

As Jenkins pointed out, and this relates to Brown, too, it’s all about the process and not so much the product. If one trusts the process, then the product should follow.

“That’s one thing I really like and appreciate about Max, he battles through adversity really well,” Justin Zeerip said about Brown after the WMC tournament last Saturday, when he lost to Hart’s Mason Cantu, 6-1, in the finals.

“I’m not worried about him. Coming off the mat, he seemed to have his head on straight. He’ll learn from that and come back stronger.”

Despite losses the last two Saturdays, those who know Brown expect him to rebound and make another serious run at a state title.

With three older brothers, he’s used to taking his lumps and coming back stronger.

In wrestling and in life, mental toughness can take somebody a long way. Brown knows this very well.

“I would say it’s the make-or-break for a lot of kids,” he said. “Just even in the practice room or anything – if you don’t have that mental toughness, you’re not going to be able to push to the next level in the practice room (or) when you get those close matches going into overtime, stuff like that. I’d say it’s a really big part of it.”