On the Mark: Orchard View-Oakridge cancellation is a tough thing for all parties 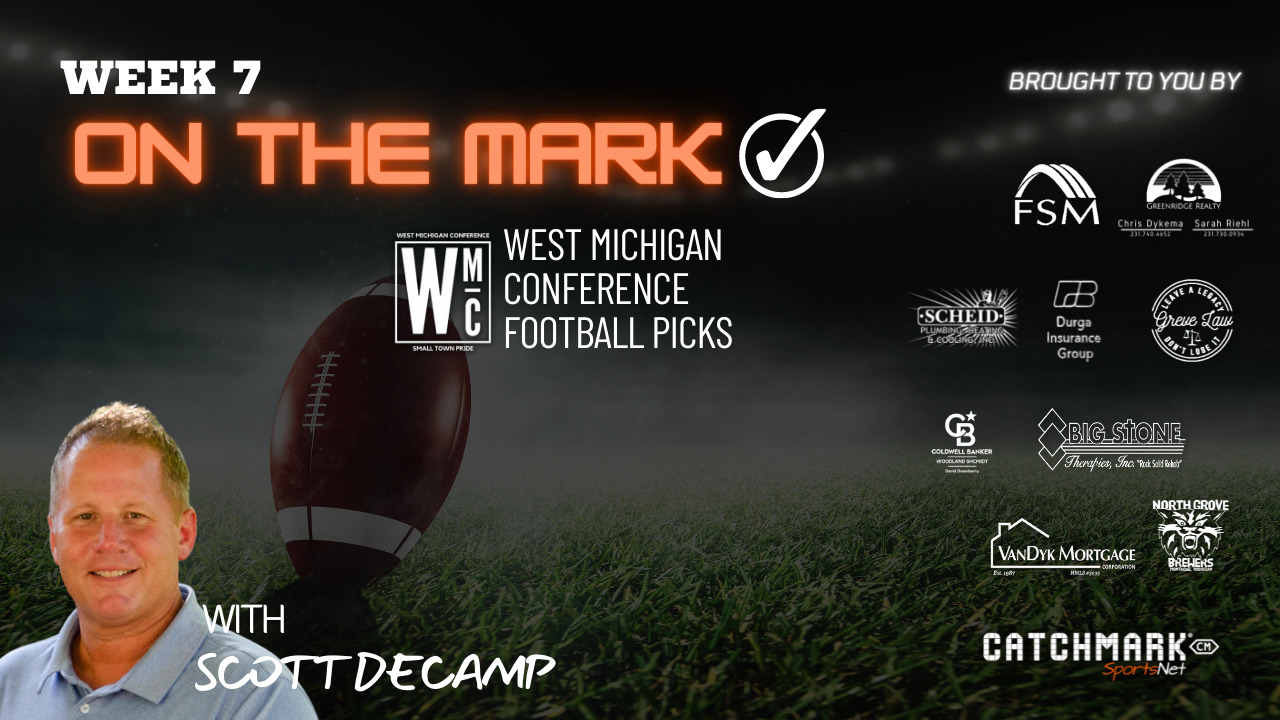 Our “On the Mark” schedule is a little lighter than the typical week.

It’s Week 7 of the high school football season and the West Michigan Conference slate features just six games as opposed to the usual seven or eight.

It’s lighter because on Wednesday, Orchard View announced that it was canceling Friday’s home game against Oakridge. Orchard View athletic director Leroy Hackley Jr. wrote in an email that several Cardinals players were out with concussions or other injuries, leaving the team short of healthy players and preventing the squad from playing this week.

Canceling a game is a bummer for all parties involved. It’s not an easy decision for an administrator to make, especially two days from the scheduled game date, so I don’t envy Mr. Hackley.

As of Wednesday afternoon, Oakridge AD Rick Ruel said it was not looking promising for the Eagles to pick up a last-minute replacement on the schedule for this week.

Hackley said that Orchard View plans on being back to full strength next week. OV’s final three games on the schedule were no joke: Home vs. Oakridge, at Ludington, home vs. Whitehall.

It’s obviously been a tough season for the Cardinals, who are 0-6 overall and 0-3 in the WMC Lakes Division. But here’s to hoping that they can return to health and continue rebuilding the program.

Everything is on the line: Driver’s seat for the WMC Rivers Division title, playoff positioning and it’s homecoming night for the Norsemen.

There is no questioning Ravenna’s toughness. We’ve seen that in different ways this season in the way the Bulldogs have kept fighting through various adversities.

The question in this showdown: Can Ravenna get pressure on North Muskegon standout sophomore quarterback James Young? If not, then that puts a ton of pressure on the Bulldogs’ defensive backs and linebackers to cover the Norsemen’s bevy of pass-catchers while also accounting for the running game.

The ’Dogs defeated the Norse twice last season: 17-6 in Week 7 at North Muskegon, and 7-6 in the first round of the Division 7 playoffs at Ravenna. It was the Week 7 game last year when Young was lost for the season with a collarbone fracture.

Both teams have plenty of incentive, but North Muskegon appears to have a little more in the tank.

Ludington (5-1, 3-1 WMC Lakes) at Whitehall (6-0, 3-0 WMC Lakes), 7 p.m. Friday: Can anybody slow down this Whitehall football team? In what was thought to be the Game of the Year in the West Michigan Conference, the Vikings put on a clinic in a 42-8 victory over a good Oakridge team last week.

Another solid team awaits Whitehall, as Ludington visits on the Vikings’ homecoming night. The Orioles suffered their lone loss three weeks ago at Oakridge, 30-18.

This is Whitehall’s final home regular-season game. The Vikings are positioning themselves for at least two, and likely more, home playoff games. This is a game where both teams stand to benefit in playoff points.

Last season, Whitehall defeated Ludington at home, 49-0. The Orioles are a much better team this season, but so are the Vikings.

Fremont (4-2, 1-2 WMC Lakes) at Montague (2-4, 1-2 WMC Lakes), 7 p.m. Friday: Montague needs a win in the worst way. The Wildcats have lost three in a row and four of their last five. That’s unfamiliar territory for this program.

It’s Montague’s homecoming – not sure if that helps the Wildcats or if it puts more pressure on them in terms of focus. Maybe it will have no bearing on the game. Fremont is definitely an improved team this season, so Montague will have to earn it.

In the latest Snooze2You Mapetology, Montague is in the Division 6 playoffs but hits the road in the opener to face Grand Rapids West Catholic. Meanwhile, Fremont is projected to visit Whitehall in the first round of the Division 4 playoffs.

Neither of those are ideal propositions. In that scenario, it would mean Fremont faces Whitehall twice in three weeks.

Shelby (2-4) at Manistee (3-3), 7 p.m. Friday: Shelby is riding its first two-game winning streak since the 2014 season, while Manistee is looking to get back on a bit of a roll after losing three of its last four.

Guess what else: It’s homecoming night, as that’s the theme across the conference this week.

Per Snooze2You’s Mapetology, Manistee is in the Division 6 playoffs as of now. The Chippewas would draw a first-round game at Reed City.

As for Shelby, the Tigers are not in the playoff picture yet. But a win would certainly enhance their chances and it’d mean the program’s first three-game winning streak since 2013, when Shelby won the West Michigan Conference and advanced to the state semifinals.

Holton (0-6, 0-3 WMC Rivers) at Hart (4-2, 2-1 WMC Rivers), 7 p.m. Friday: Coming off a lopsided loss to North Muskegon, Hart faced a bit of a turning point last week at Mason County Central and the Pirates delivered. They proved that things are a little different this season and picked up an important 22-16 victory.

Hart should be in great shape this week and for next week’s homecoming game vs. Hesperia, then it’s another really big game at Ravenna in Week 9. Could that one determine the Pirates’ playoff fate?

Speaking of Ravenna: Hart head coach Joe Tanis and Holton head coach Tommy Moore worked there together not too long ago.

This is Mason County Central’s third straight home game. It’s also homecoming — should be a happy one for the Spartans. Hesperia has struggled and injuries haven’t helped.

In another one of those twists: David Smith, the former Ravenna coach who spent last season as Hesperia’s head coach, is on the staff at Mason County Central.

On the Mark: Oakridge-Whitehall is WMC Game of the Year and we’re all over it
On the Mark: Tough times with West Michigan Conference cancellations, better days ahead