The poll will remain open until noon on Friday, Nov. 11. 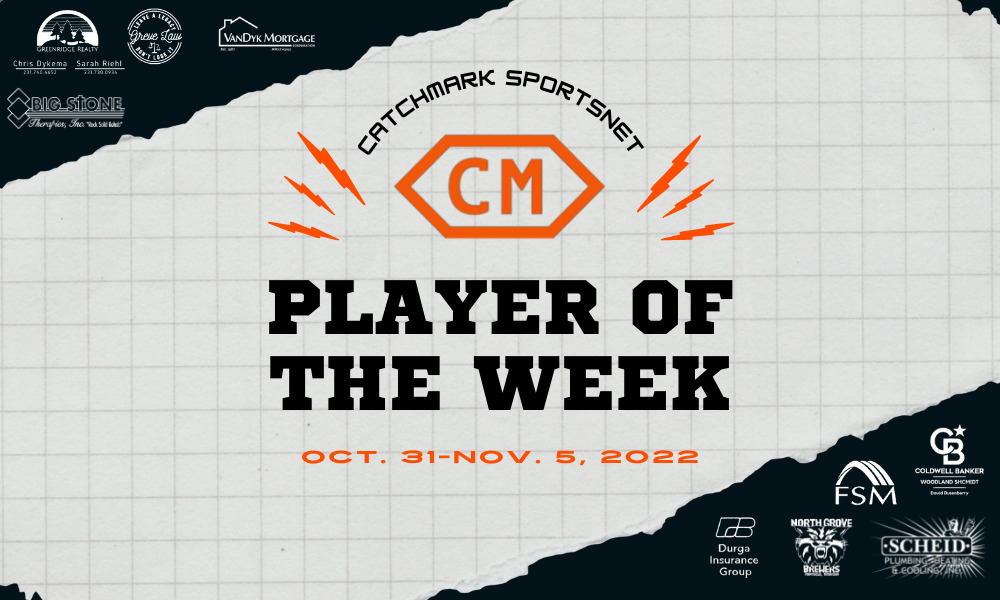 All good things must come to an end.

This is the final CatchMark SportsNet Player of the Week fan poll, but don’t fret: It’s the last one for the 2022 fall sports season only — we’ll be back for the 2022-23 winter sports season.

The 11th edition of the Player of the Week fall sports poll recognizes six nominees based upon athletic events in the conference spanning Oct. 31-Nov. 5, 2022.

The poll can be found at the bottom of this story after brief capsules on the six nominees. Voting is open and will continue until noon on Friday, Nov. 11.

The senior finished his high school cross country career in fine fashion, placing second individually and leading his team to the Division 3 championship in Saturday’s state finals at Michigan International Speedway in Brooklyn. It’s Hart’s first state title for a boys team in school history. Ackley clocked a time of 15:52.14, his second best of the season, in gale-wind conditions.

The 5-foot-9 senior middle hitter sparked the Norse to a Division 3 district title last week at Fennville. In victories over Western Michigan Christian and Saugatuck, Bogner totaled 25 kills, four blocks and three aces. Coach Kammi Eacker said Bogner is an active blocker with a high vertical leap. Entering this week’s regional, she has totaled 170 kills, 53 blocks and 34 aces on the season.

The 6-foot, 170-pound senior was a game-breaker for the Vikings in their 51-26 victory over Fruitport in the Division 4 district championship game Friday. Bolley rushed for a game-high 163 yards on just 10 carries. His biggest play was an 82-yard kickoff return late in the third quarter that capped a wild sequence featuring four touchdowns in a 49-second span. He also had 3.5 tackles.

The sophomore ran away from the pack en route to capturing the individual title at the Division 3 cross country state finals Saturday at Michigan International Speedway in Brooklyn. In gusty winds and heavy rain at times, Jazwinski clocked a 17:36.7, her second-best time of the season. She beat the runner-up finisher by nearly 41 seconds. As a freshman, she placed third at the state finals.

The 6-foot, 160-pound junior linebacker had a big game for the Eagles in their 30-8 victory over Belding in a Division 5 district championship game Friday. Jennings was a big reason Oakridge held Belding’s offense in check. He notched a team-high 13 tackles. On the season, he leads the Eagles with 90 total tackles, including four for lost yardage with one interception and four pass breakups.