The poll will stay open until noon on Friday, Oct. 7. 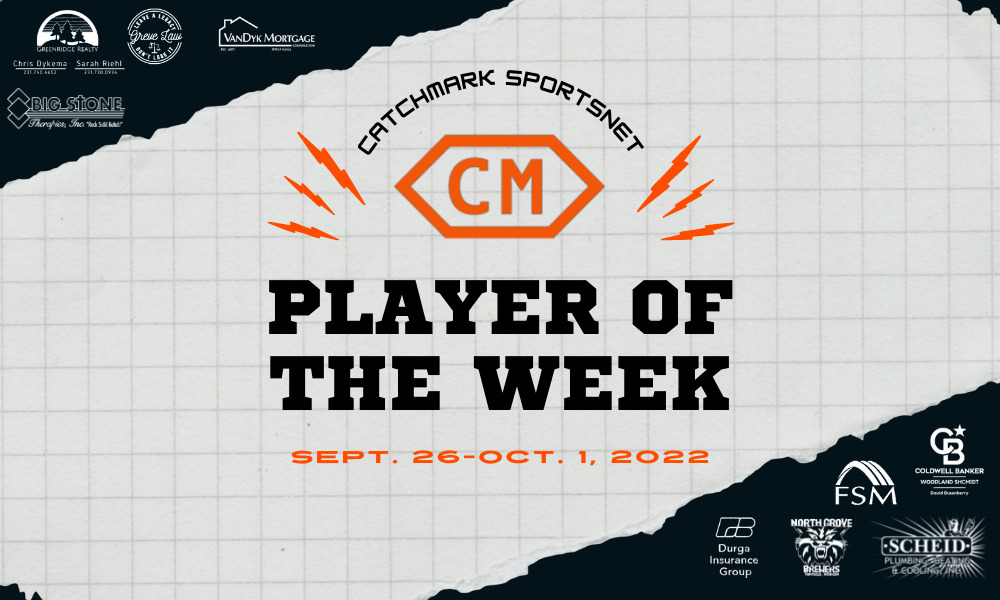 It’s the sixth edition of the 2022 CatchMark SportsNet Player of the Week series.

Can voters top the previous five weeks? We’ll see about that.

It’s time to recognize the next batch of nominees, based upon athletic events in the West Michigan Conference spanning Sept. 26-Oct. 1, 2022.

The poll may be found at the bottom of this story after brief capsules on the six nominees. Voting is open and will continue until noon on Friday, Oct. 7.

The Pirates senior finished ninth in the highly competitive Shepherd Bluejay Invite on Saturday. More importantly, he broke the Hart school record previously held by cousin Alex Enns. Ackley turned in a time of 15:41.8. Enns previously set the record with a 15:52.8 during the 2018 regional at Bear Lake. Ackley hadn’t broken the 16-minute mark in his career prior to Saturday.

The 6-foot-1, 205-pound senior had a night to remember in Shelby’s 26-6 homecoming victory over Holton on Friday. From the quarterback spot, he completed 11 of 28 passes for 206 yards with two touchdowns and no interceptions. Boughan also ran 14 times for 72 yards. From his linebacker position, he notched a team-high 4.5 tackles with a pick-6. To top it off, he was crowned homecoming king.

The 6-foot, 200-pound senior spearheaded the effort as the Orioles defeated rival Manistee, 45-21, on Friday night in the latest edition of the state’s fourth-oldest rivalry. Forfinski ran 17 times for a game-high 131 yards and a touchdown. From his linebacker spot, he notched a game-high 10.5 tackles with a sack and three tackles for loss.

The 6-foot-2 sophomore outside hitter had a big day in leading Shelby to the title of the Karen Kirk Memorial Volleyball Tournament it hosted Saturday. On the day, Gauthier finished with 50 kills, 15 aces and three blocks. The Tigers beat Ludington 25-18, 25-21 in the finals and finished 4-0 on the day. She also led Shelby to victories over Holton and Whitehall earlier in the week.

The Wildcats all-state has enjoyed a very strong junior season and that continued with her play in the Katke Classic over the weekend at Ferris State University. On Day 1 Friday, Goudreau posted the top score among 102 competitors with a 76. On Day 2 Saturday, she shot 84 to put her seventh-best on the day and second overall in the tournament. Montague was second on the team.

The sensational sophomore finished first among 172 runners in the Elite race of the Shepherd Bluejay Invite on Saturday. Furthermore, Jazwinski established a personal record with a time of 17:41.3. Her previous best was the 17:43.2 she ran in the regional at Benzie Central last fall. Jazwinski’s previous best time this season was a 17:44.9 she turned in at the Pete Moss Benzie Central Invite.