Power rankings, followed by predictions in week highlighted by ‘Battle for the Bell’ 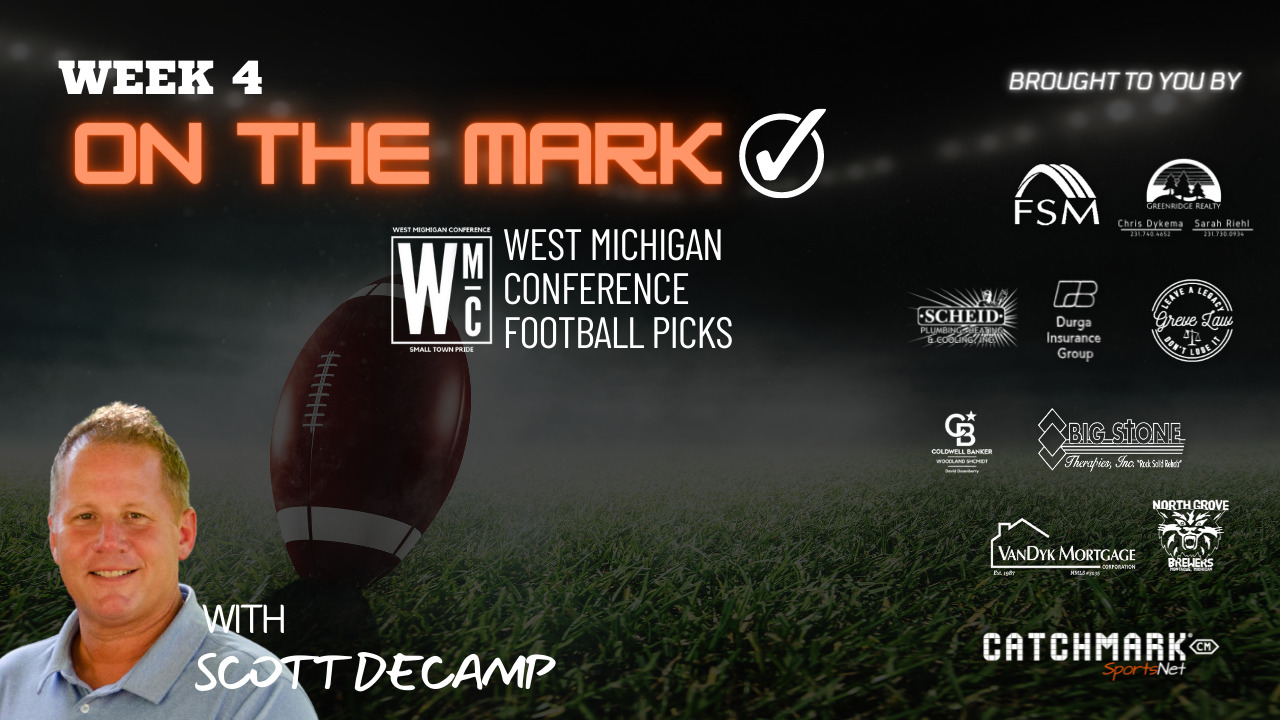 Seems like food is a talking point in this space each week.

Well, it ties into the “On the Mark” discussion again this week – kind of.

During lunch Wednesday with my CatchMark colleagues, the topic was raised: What would be your power rankings among West Michigan Conference football teams?

Since CatchMark SportsNet is not doing power rankings as its own piece of content this fall, I figured we could address that right here, right now, on the eve of the Week 4 slate.

Here are the top seven based upon what I’ve seen and what I know about the teams:

Whitehall is the clear favorite and Oakridge is the clear No. 2. Can’t wait until their showdown in Week 6 at Oakridge. North Muskegon and Ravenna are neck-and-neck with the Norsemen holding the slight edge for now. Montague could be higher, but the Wildcats lost to Ravenna so they need to be behind the Bulldogs. While it didn’t make the top seven, Manistee is knocking on the door.

Whitehall basketball coach Christian Subdon, who is our “On the Mark” guest picker this week, has a football background. I wonder how he’d order the power rankings. (I mean, everyone knows his No. 1. Duh!)

Now, as for power rankings for “On the Mark” panelists, I guess you’ll just have to go by overall records. Everybody’s chasing you, Cal!

Here are the Week 4 predictions, followed by a little more detail for each of the games involving West Michigan Conference teams:

Montague (2-1, 1-0 WMC Lakes) at Whitehall (3-0, 0-0 WMC Lakes), 7 p.m. Friday, North Grove Brewers Game of the Week: It’s always a chore predicting the score of a rivalry game. So many variables play into it, but emotion and pride are big elements.

On paper, Whitehall is the clear favorite in this latest edition of the “Battle for the Bell.” The Vikings have posted three impressive victories and they have so many ways they can beat a team.

On the flip side, Montague has been a little more uneven in its performances to this point. But the Wildcats still have talent and they’d love nothing more than to bring the bell back to their side of the bridge.

Whitehall had a talented team last year, too, and even though the Vikings beat the Wildcats 34-14, the game was tied at 14 entering the fourth quarter.

Wouldn’t expect Montague to go away easily in this one, either. Whitehall certainly has the horses to put this one away earlier. Keep saying it, but this Vikings team just looks a little different than predecessors.

As the North Grove Brewers WMC Game of the Week, this will be livestreamed for free by CatchMark SportsNet. Pregame show begins at 6:30 p.m. Here is the link:

Ludington has played tough so far this season, but Friday’s task at Oakridge is on another level. That’s not to say the Orioles cannot pull it off – it’s just going to require their best effort.

The names may change on the Oakridge roster from year to year, but the Eagles’ consistency and toughness do not.

Orchard View (0-3, 0-1 WMC Lakes) at Manistee (2-1, 0-1 WMC Lakes), 7 p.m. Friday: It just doesn’t get any easier for Orchard View, which is coming off a loss to a Montague team hungry for a bounce-back. The Cardinals are facing a similar scenario this week, traveling to Manistee to face a squad looking to rebound from its loss to Oakridge.

OV’s schedule has been tough and it’s not looking to get any easier with Muskegon Catholic Central, Fremont, Oakridge, Ludington and Whitehall still to come.

Manistee gets back on track this week.

It’ll be tough for the Panthers to get enough stops to hang in there against the Norsemen.

The Bulldogs are looking for their ninth straight victory in the series against the Tigers.

In the coaching matchup, you’ve got Mason County Central’s Scott Briggs, who in his 26th season is the elder statesman in the conference, vs. Holton’s Tommy Moore, who is in his first season at the helm.

Fremont (2-1) at Grant (1-2), 7 p.m. Friday: As recently as last season, Fremont and Grant were foes in the Central State Activities Association Gold Division.

The Packers have not defeated the Tigers since 2013, so they’ve got to be hungry to get a win here. Also, they’re looking to bounce back from a hard-fought 7-0 home loss to Ludington in the North Grove Brewers WMC Game of the Week.

Both teams have head coaches in their first seasons at their respective schools. Have to give the edge to Fremont here, even though the Packers are on the road.

Hart (2-1) at Muskegon Heights Academy (0-3), 7 p.m. Friday: Hart is aiming for a third straight win and more momentum heading into next week’s big WMC Rivers Division contest at North Muskegon, which will be the North Grove Brewers Game of the Week.

Muskegon Heights Academy seemed to have some momentum last season, but the Tigers have struggled out of the gate after losing head coach Van Parker, who accepted a position as wide receivers coach at Division II University of Nebraska Kearney.

On the Mark: It’s tough to focus on football with visions of Spanky’s Pizza in my head
On the Mark: For Week 5 and beyond, the theme in the WMC is sportsmanship