‘He does not miss:’ Oakridge’s Arturo Romero a record-setting revelation on soccer field

“I was like, ‘OK, just score a couple.’ I was like, ‘At least try to get close to your record, your previous year,’” said the 5-foot-9, 140-pound Mexican-born striker, who led the Eagles with 20 goals and nine assists as a sophomore in the 2021 season.

“I struggle with confidence, so it was just something that I needed to work on.”

Ten games into this season, Romero is turning heads and generating a buzz about soccer at a school where football has been king.

Romero has tallied a whopping, school-record 32 goals already, including a run of seven straight matches in which he’s notched at least a hat trick as Oakridge (8-1-1 overall, 3-0-0 West Michigan Conference) has reeled off its current seven-game winning streak.

Romero’s run of hat tricks ranks him second in the Michigan High School Athletic Association record books for consecutive games with a hat trick, two off the record held by Jamison Imhoff of Lansing New Covenant Christian in 2008. The state’s single-season record for goals is held by Dearborn’s Soony Saad with 76 in 22 games during the 2009 season.

After each goal he scores, the affable Romero mimics Tottenham Hotspur F.C. star Son Heung-min, who celebrates his goals by pretending to take a picture.

“It’s like taking a picture to make a memory,” said Romero, who is creating so many memories this season.

It begs the question: This is the kid who lacks confidence?

That is not at all evident on the pitch.

“He’s taken over as a vocal leader this year beyond anything I expected. I knew he would, but he’s very vocal and these guys all respond to him,” Oakridge soccer coach Greg Fleener said. “I hate to make it sound like it’s a one-man team because there’s 10 other guys out there working with him.

“I’ve got two guys that are almost racking up double-digit assists for him. I mean, somebody’s got to get him the ball. He’s not going to do it by himself. It’s huge to have this group that really cares about each other and cares about winning.”

Romero clearly is the ringleader. However, in another surprise, he strongly disliked soccer when he first started playing the sport as a youngster in Mexico.

Born in Guadalajara, Jalisco, the son of Arturo and Karina Romero said he was pushed by his mother to play soccer.

“I tried out in Mexico and I was like, ‘Man, I hate this.’ As a kid, I was soft. I did not like people touching me, so I didn’t like soccer,” he recalled. “I remember my mom was like, ‘Either you go or you’re grounded.’ I was like, ‘Well, I don’t want to be grounded.’ And then I fell in love with it, so I’m glad she pushed me.”

Romero said his family moved to Muskegon when he was around preschool age. Older sister Andrea is a senior at Oakridge, who is a standout catcher for the Eagles’ softball team.

Arturo Romero carries a 4.0 grade-point average. The classroom is another area of emphasis by his parents. He is not hearing from any colleges yet for his soccer exploits, but he figures getting good grades will make him that much more enticing as a prospect.

When asked what sets Romero apart from other players he’s coached, Fleener said it’s his work rate. The veteran coach believes Romero possesses the skill level of a Division I-type of college prospect – notably, his deft ability to finish with either foot – but his smallish stature may deter some programs.

Romero vows to address the physicality aspect this coming offseason, aiming to hit the weights and increase protein intake in an effort to pack on muscle. He’s already come a long way when you consider he scored just two goals his freshman season for Oakridge.

“He’s really good. He moves quick, he’s swift, he can read a defender and he does not miss a goal. It’s hard to mark him,” Ravenna coach Alex Mares said about Romero, who surpassed Travis Lucas’ single-season goal-scoring record for Oakridge (26) during last week’s game at Fremont.

“(Thirty-two goals in 10 games, seven straight hat tricks) that is impressive. I haven’t seen that in high school, I don’t think ever.” 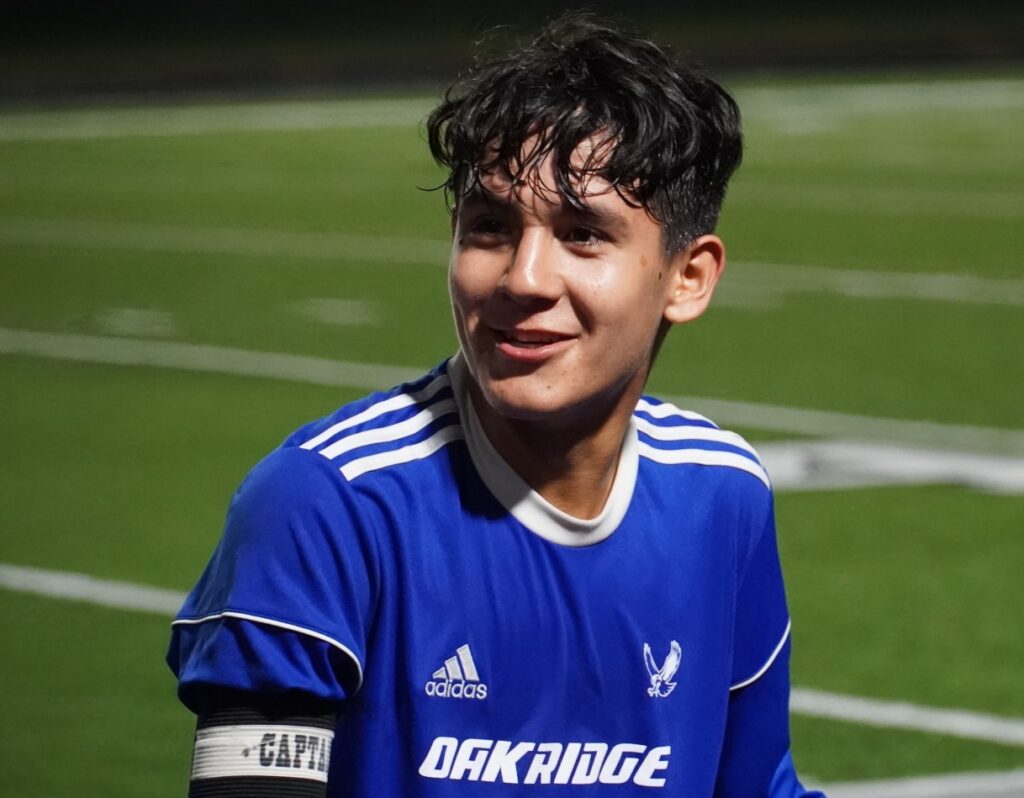 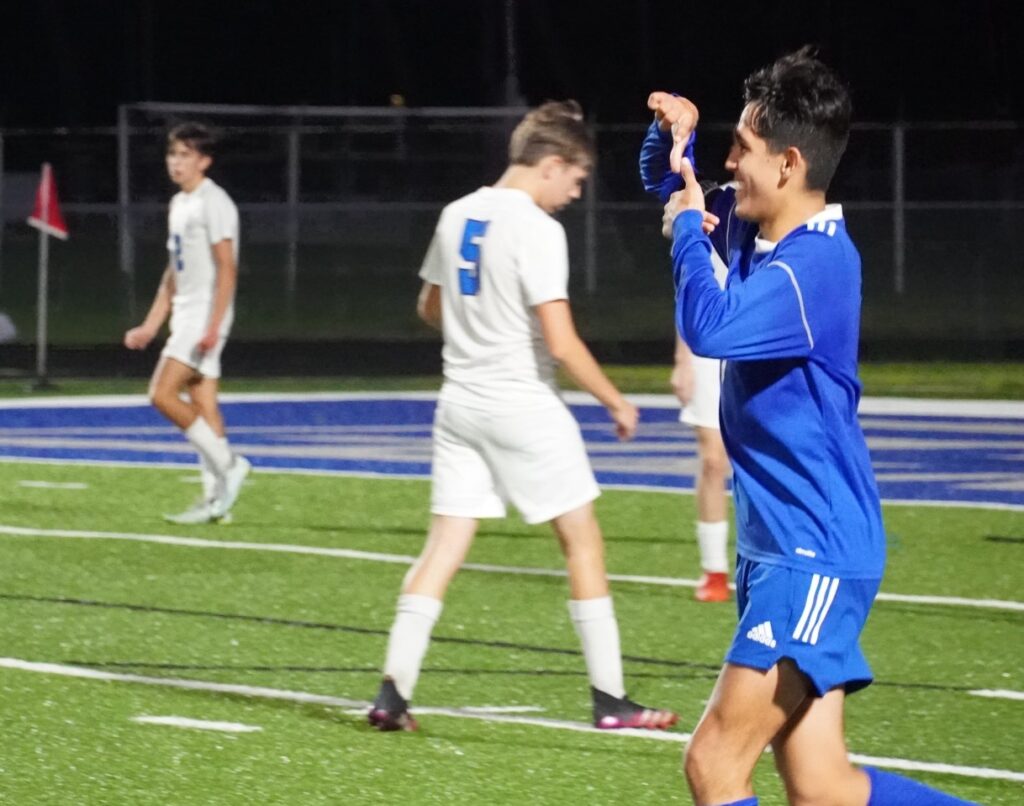 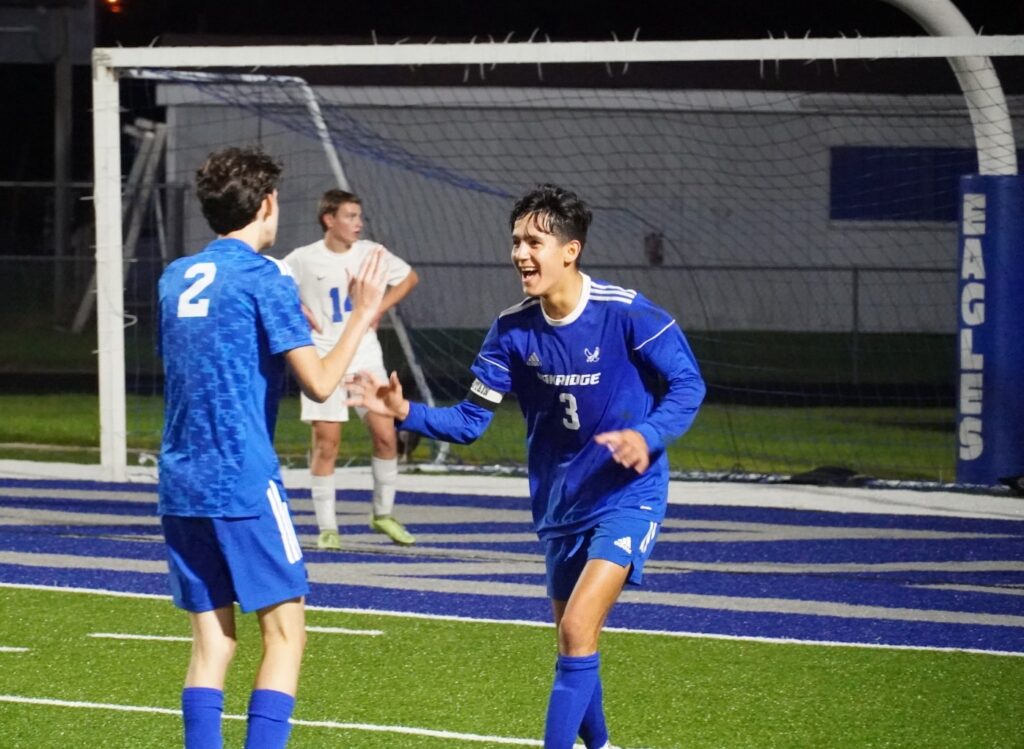 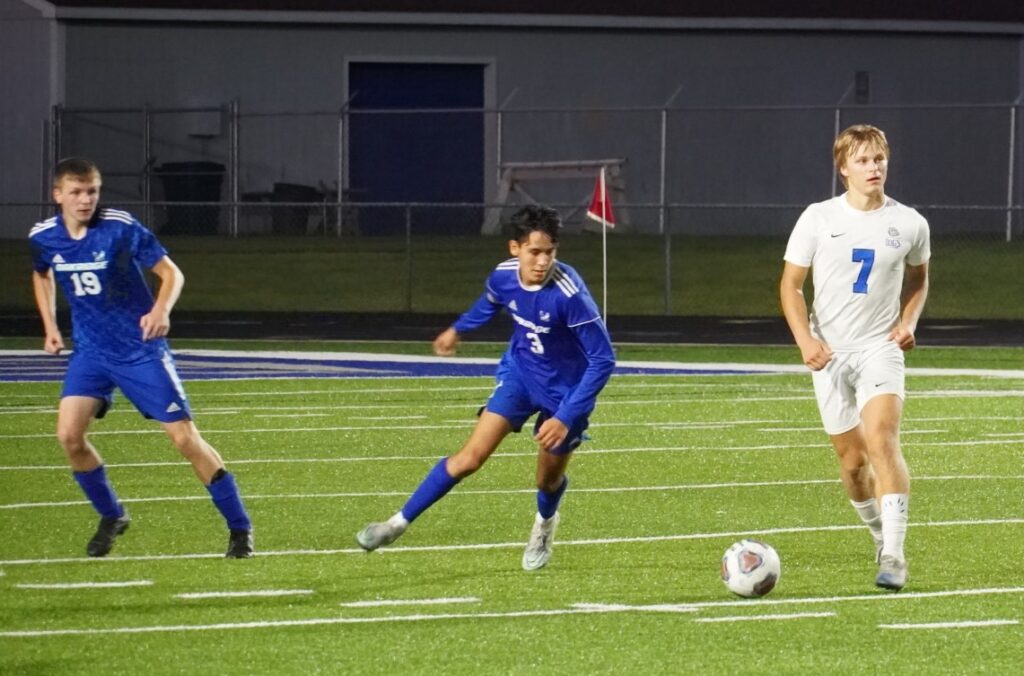 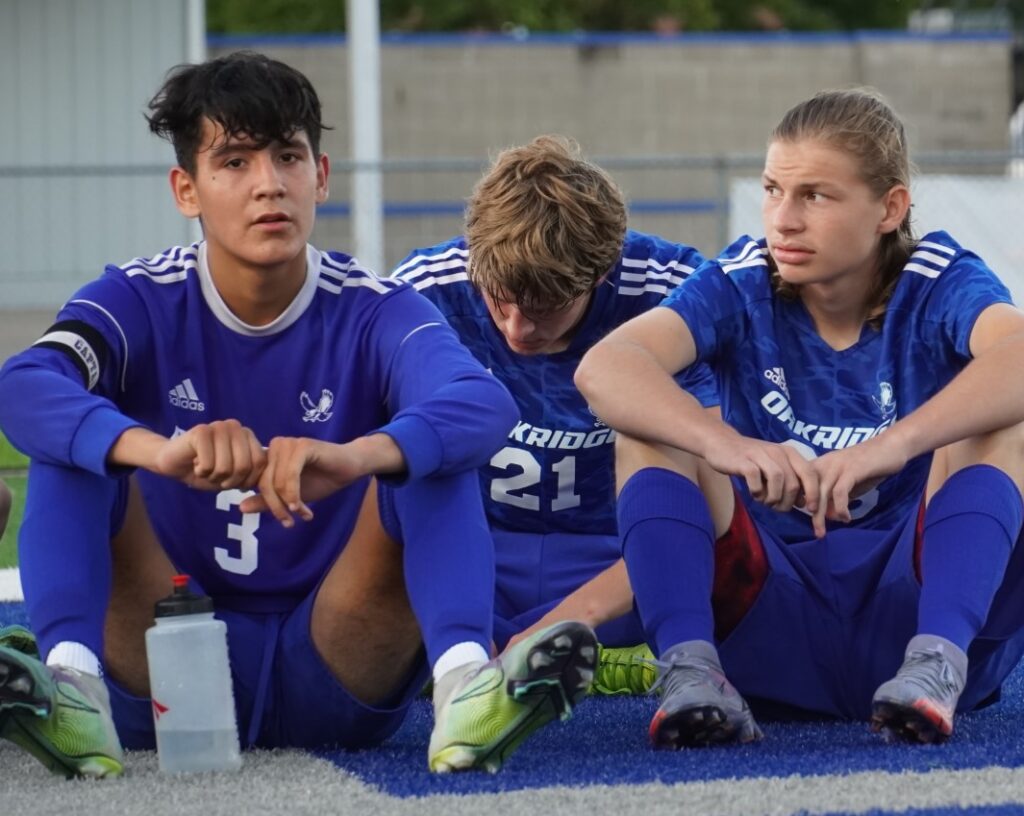 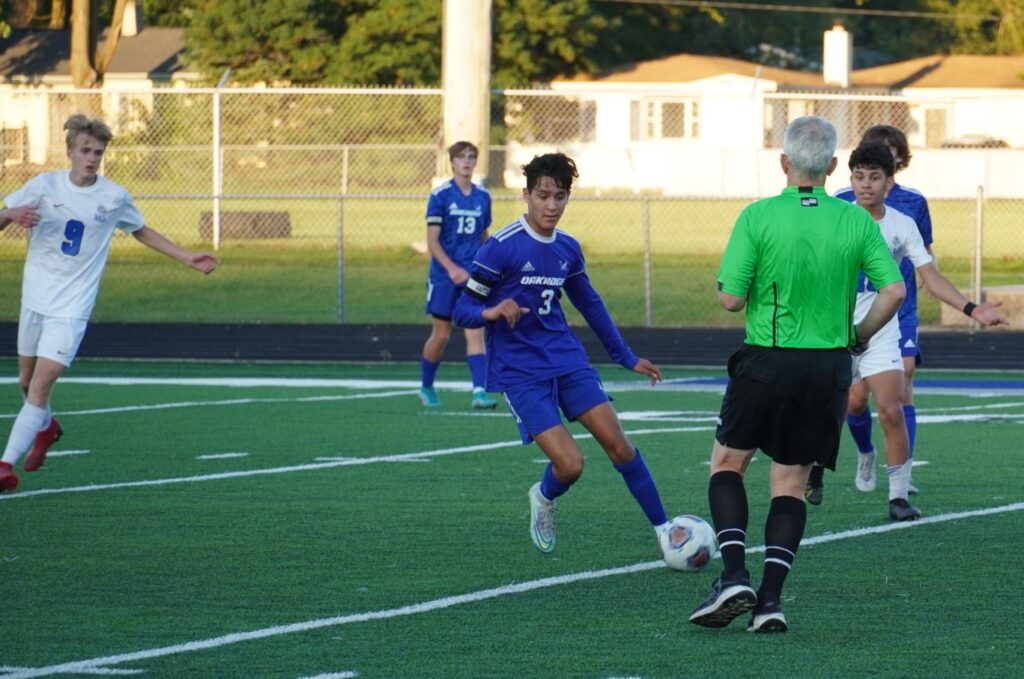 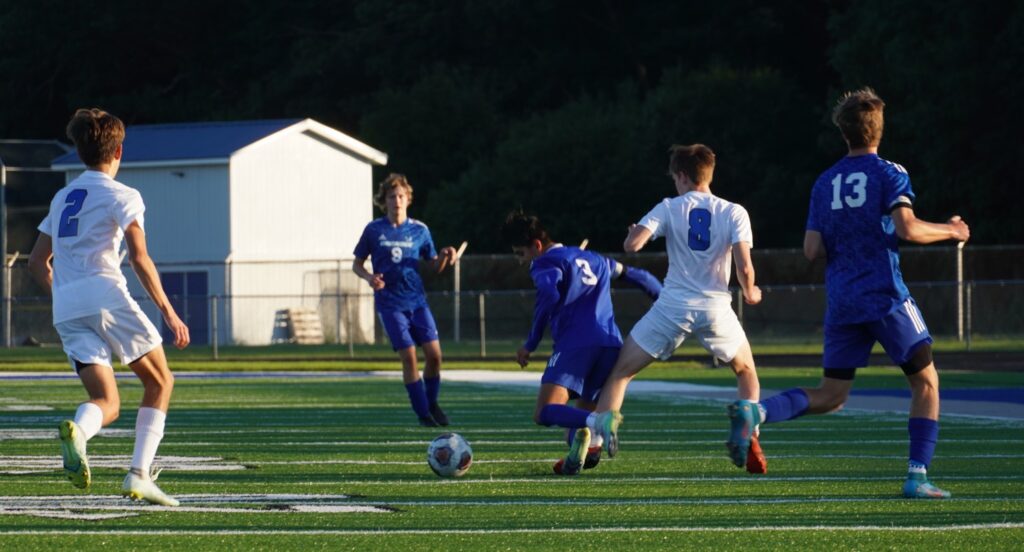 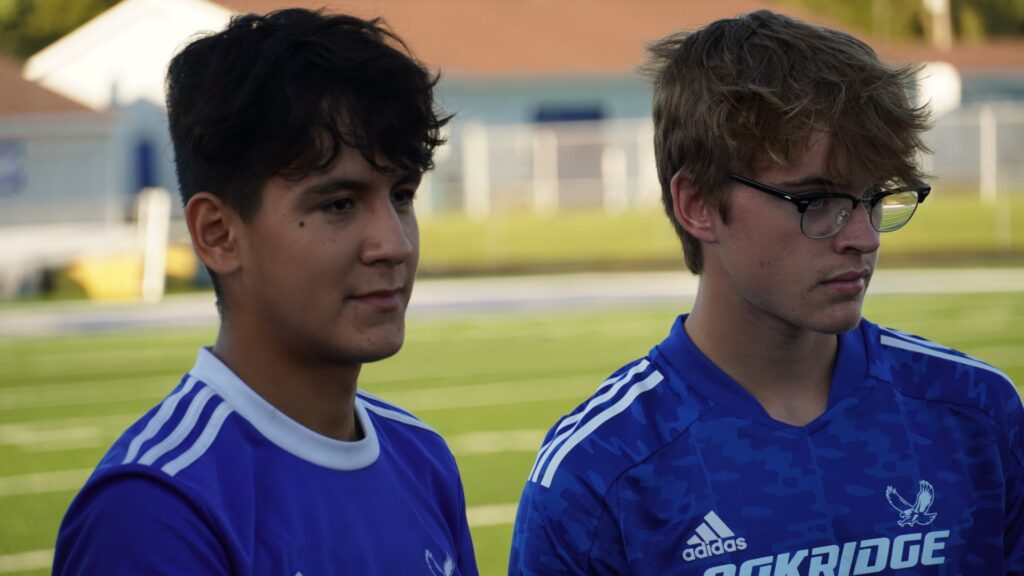 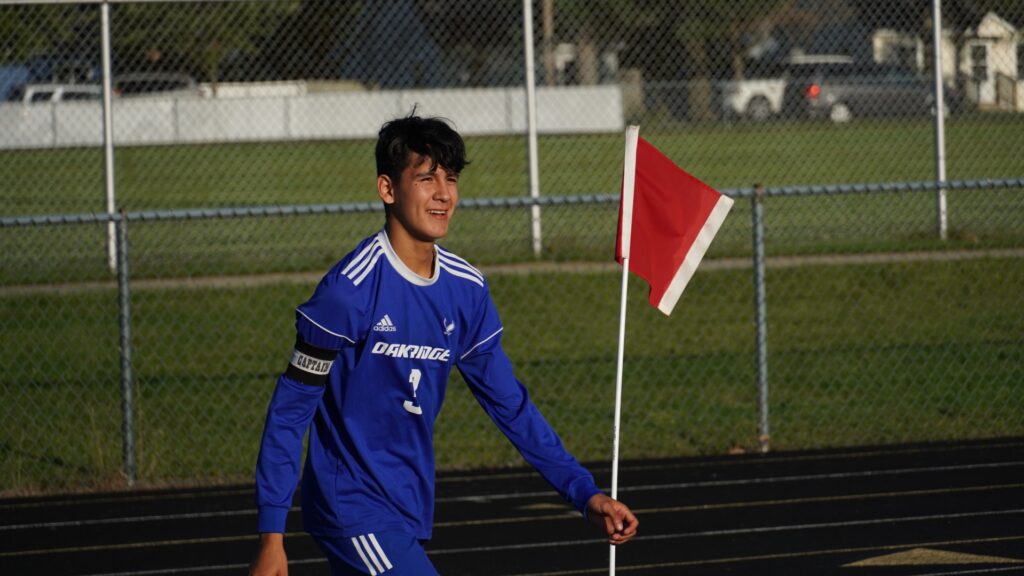 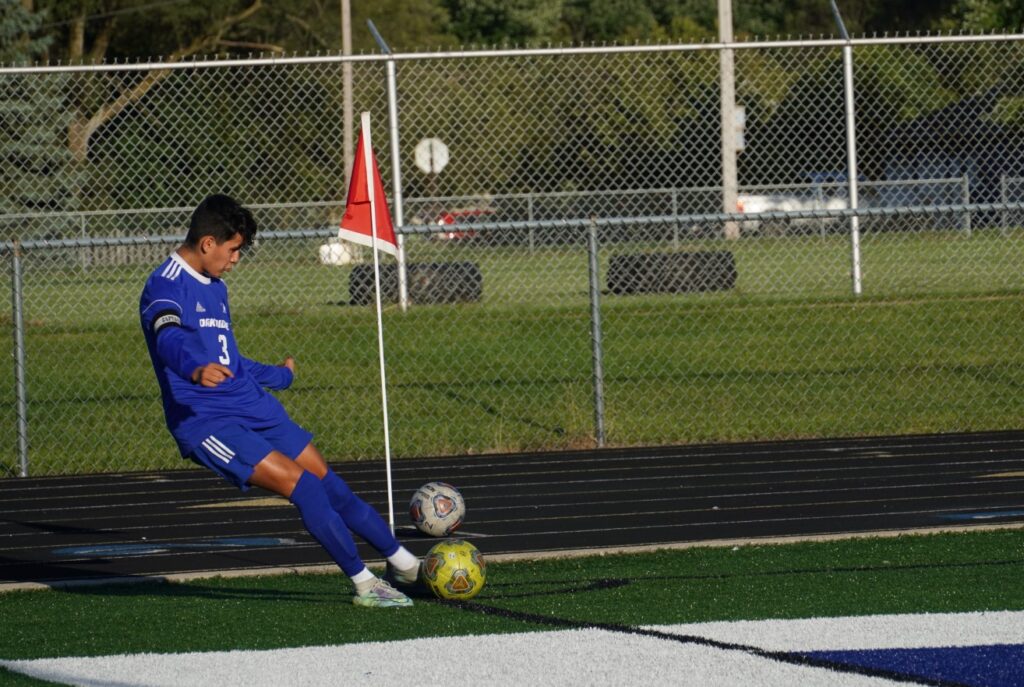 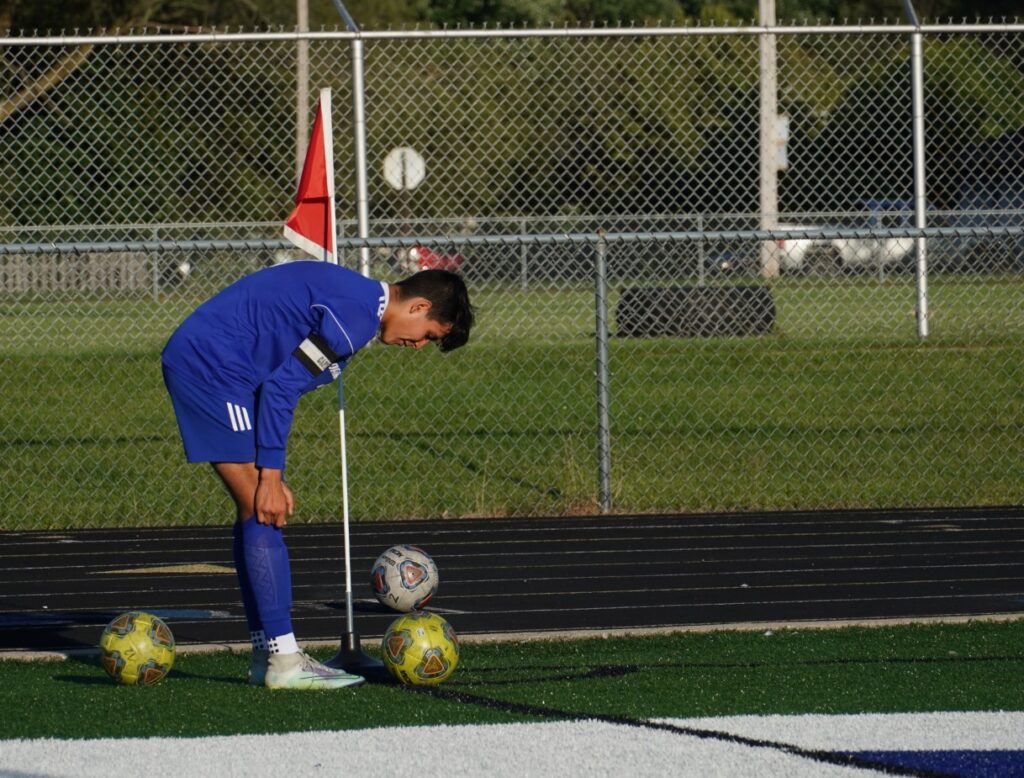 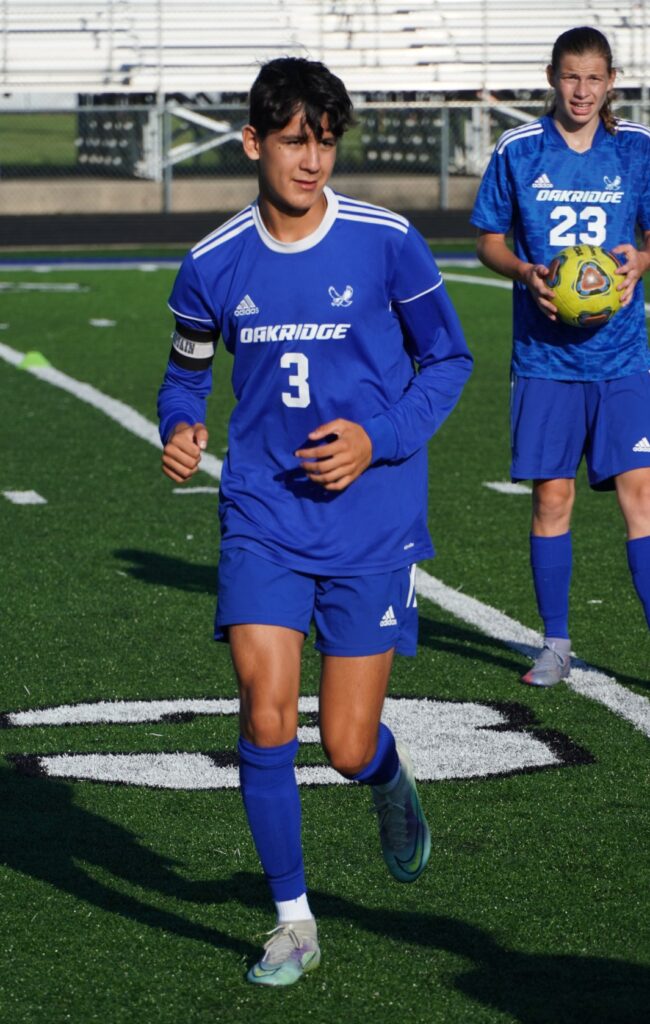 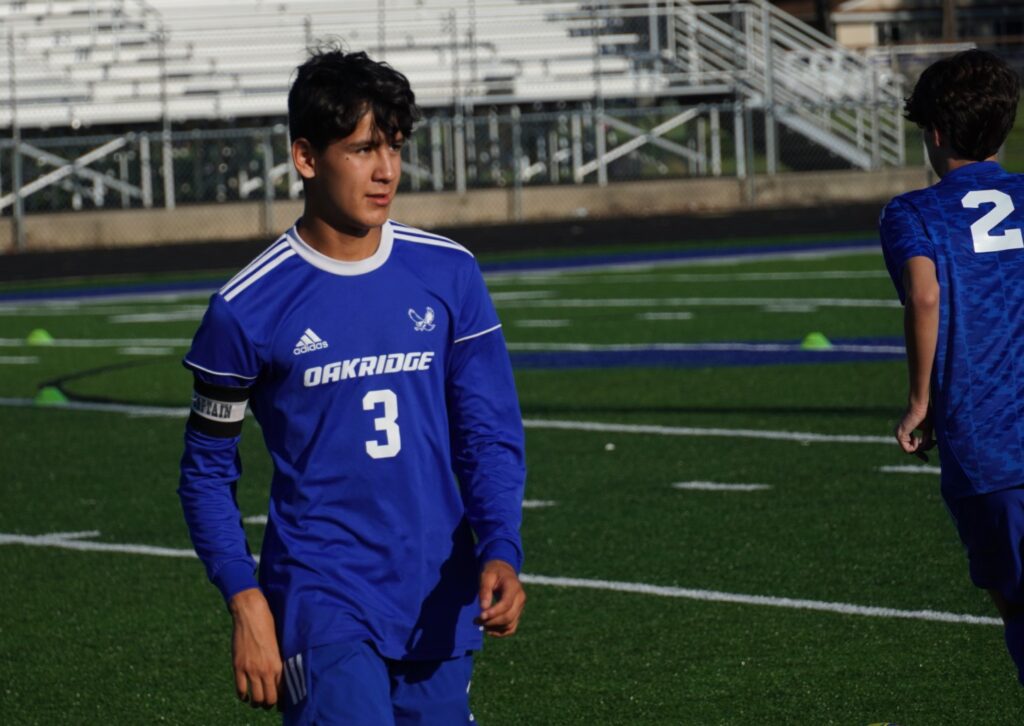 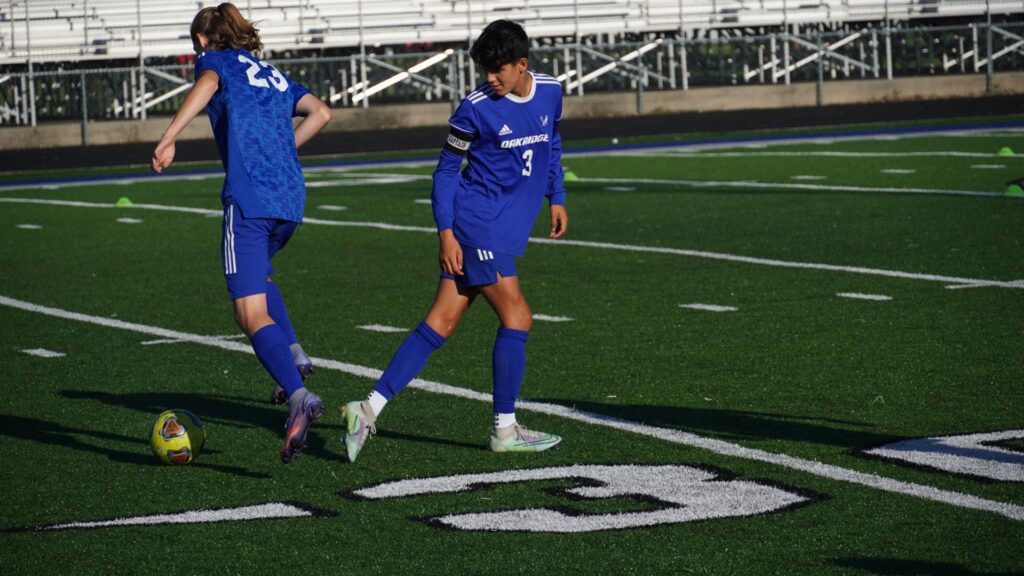 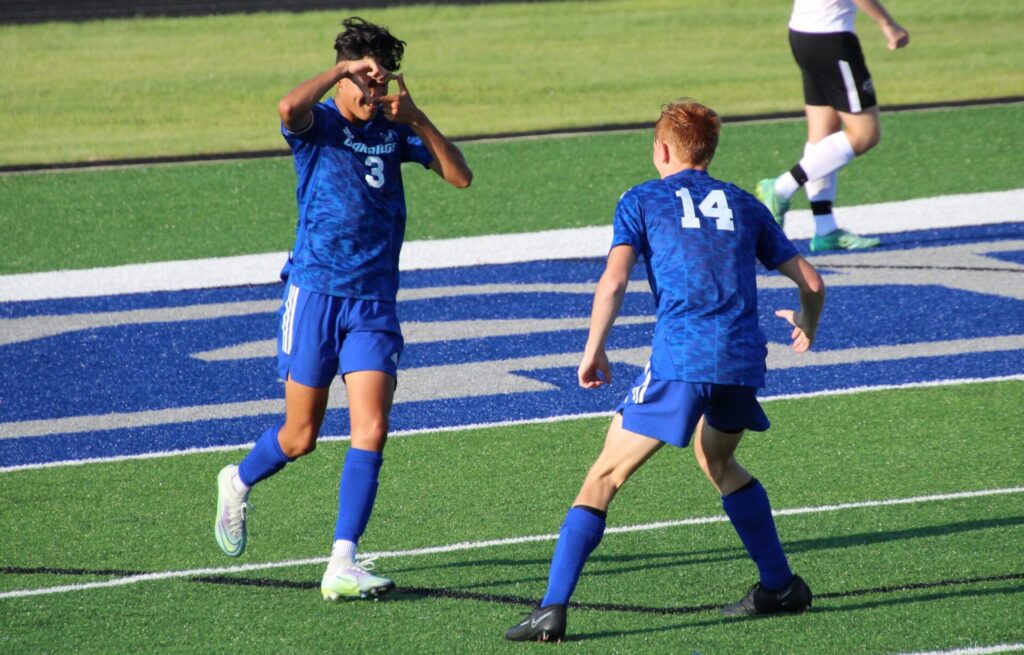 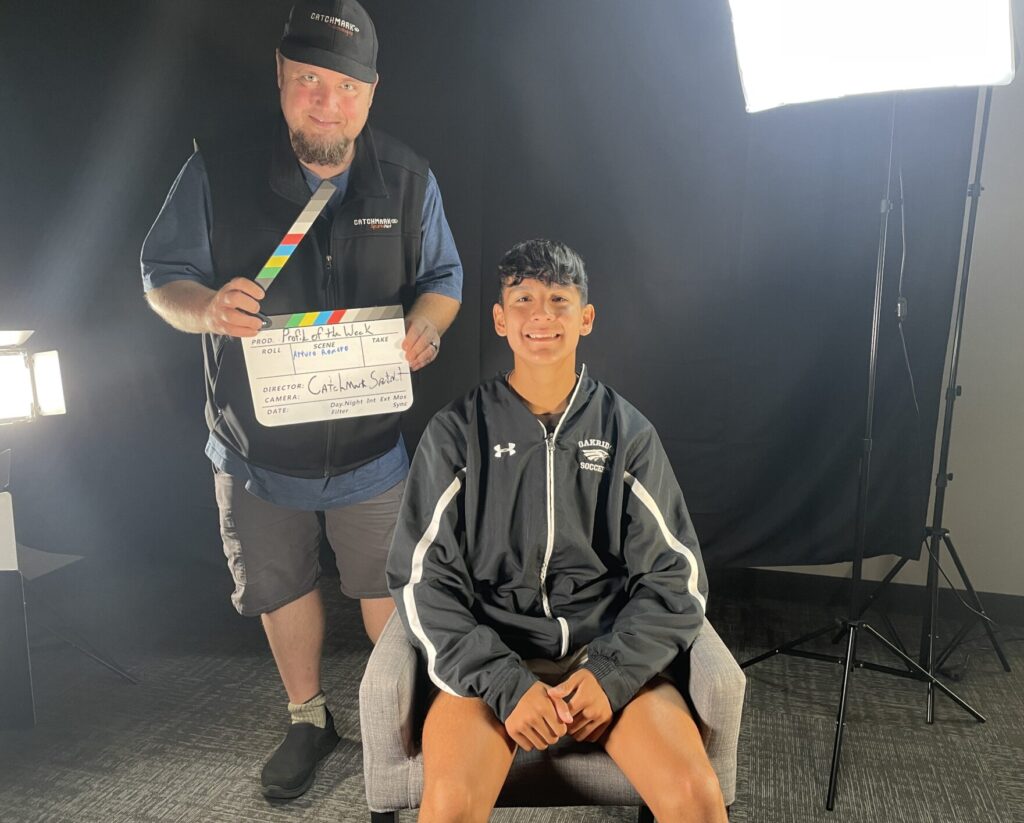 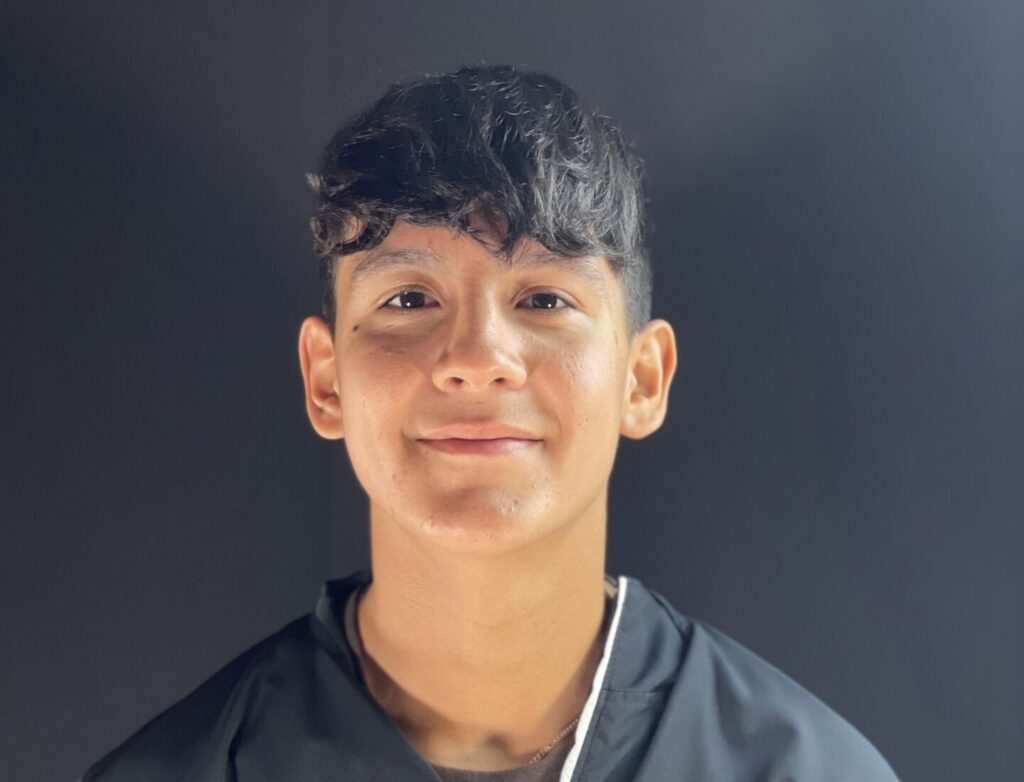 Romero did something during summer conditioning that Fleener had never seen before. He scored 16 on the “beep test,” which is a multi-stage fitness test used to estimate an athlete’s aerobic capacity. The test requires athletes to run 20 meters back and forth across a marked track keeping time with beeps.

Add Romero’s agility, foot speed and elusiveness to his ability to see the field and anticipate better than most, and it explains why he’s been so prolific this season.

“First of all, I’ve never had anyone run a 16 (on the beep test) and it was in the middle of summer. We were just working out. It wasn’t like he was getting rated, he just ran,” Fleener said. “He did it by himself. I’ve seen a pair go a long ways because they can push each other, but as soon as you get by yourself in that beep test, it’s brutal. It’s summer time, it’s hot.”

As hot as Romero’s been during his goal-scoring tear, you wouldn’t know it by the way he carries himself.

Teammates and classmates respect him for his talent, of course, but maybe more so for his humility. Oakridge senior Ryan Cribbins, a fellow captain, calls Romero a “great teammate” and “great leader,” who picks everyone up.

Romero said his teammates “work their butts off,” and he’s thankful for them. Their hard work allows him to excel, he said.

“He works so hard to get open that it’s just easy for us to find him and then he does the rest and we win games,” Cribbins said.

People are definitely noticing Romero “doing his thing.” During Oakridge’s home game against Ravenna Wednesday at Russell A. Erickson Stadium, the Eagles’ student section was larger than Romero has seen it for a soccer match.

The Oakridge students, many wearing fluorescent clothing, were loud and proud. It was certainly noticed and appreciated by Romero.

“I definitely think it’s something awesome, you know. Just getting acknowledgement going, not just for me but for my whole team because I know how hard they work, we know how hard we work,” said Romero, 16, who plays travel soccer for the West Michigan Storm premier club.

“And it’s definitely good seeing our community just come together, like, ‘Oh, we’re (a football school), but soccer is making some noise. Let’s give them some praise.’ I definitely think it’s good that soccer’s getting the acknowledgement it deserves because it’s a beautiful sport.”