The poll will remain open until noon on Friday, Sept. 9. 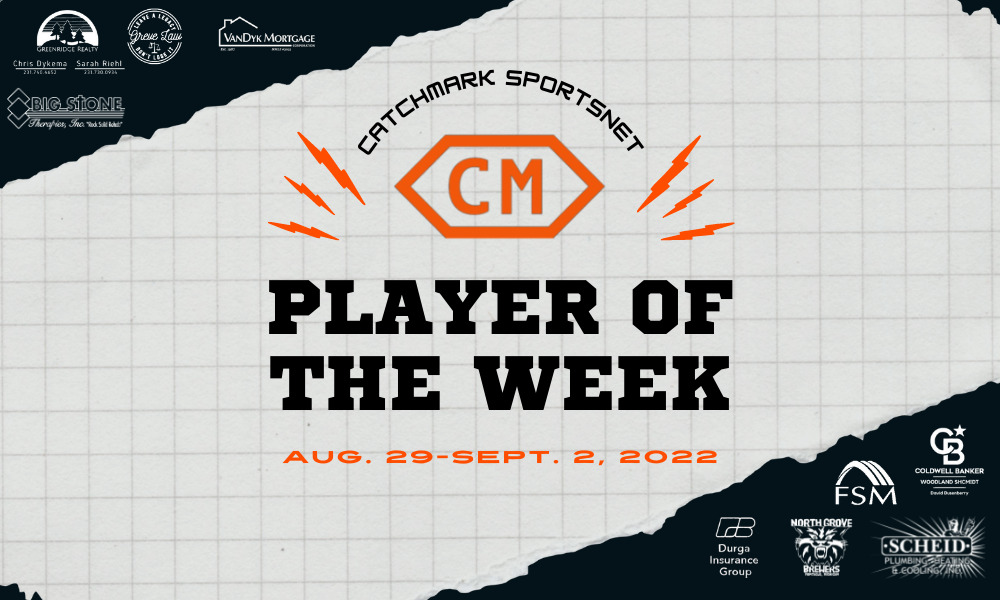 Last week, CatchMark SportsNet launched its 2022 fall sports Player of the Week series in an effort to highlight top performances across the West Michigan Conference.

Readers responded in a big way by consuming the content and participating in a poll that generated nearly 5,000 votes over a five-day span. In the spirited vote, Ludington sophomore volleyball player Jordyn Anderson edged Oakridge junior soccer player Arturo Romero.

Now it’s time to recognize the next batch of nominees. Below are Player of the Week nominees for athletic events spanning Aug. 29-Sept. 2, 2022.

The poll can be found at the bottom of this story, after brief capsules on each of the nominees. The poll will remain open until noon Friday, Sept. 9. You may vote once per hour.

The Wildcats junior led her team to a second-place finish in the Whitehall Invitational on Wednesday (Aug. 31) at White Lake Golf Club. Goudreau shot an 86 to finish runner-up individually in the event behind Ludington’s Emma McKinley (78). Montague shot 381 as a team, six shots behind first-place Sparta. The next day, Goudreau shot 47 to finish fifth in a nine-hole West Michigan Conference jamboree at White Lake Golf Club. Montague placed third as a team in that event.

The senior quarterback had a huge night in Ludington’s 55-7 victory at Shelby on Thursday (Sept. 1). Hackert completed all eight of his passing attempts for 186 yards for two touchdowns. He also ran six times for a game-high 139 yards and three more scores, averaging a whopping 23.2 yards per carry. Hackert scored on runs of 55, 54 and 40 yards. The Orioles are 2-0 on the young season with a big game this Friday at Fremont, which also is 2-0. It’s the North Grove Brewers Game of the Week.

The Orioles junior is coming off a dominant week. On Wednesday (Aug. 31), McKinley ran away with medalist honors in the Whitehall Invitational at White Lake Golf Club with a 7-over 78, winning by eight shots. The next day, she shot 39 in a nine-hole West Michigan Conference jamboree on the same course to finish atop the leaderboard and lead Ludington to first place as a team. To top it off, McKinley followed up over the weekend by becoming the 2022 Lincoln Hills junior club champion.

The Eagles junior striker continued his torrid pace and set his school’s single-season scoring record in only the ninth match of the season. In Oakridge’s 6-1 victory at Fremont on Wednesday (Aug. 31), Romero tallied all six goals. That gave him a school-record 28 goals on the season and, at the time, improved Oakridge to 7-1-1 as a team.

The Norsemen sophomore quarterback put up big numbers for a second straight week as his team defeated host Orchard View on Thursday, 55-0. Young completed 15 of 23 passes for 232 yards with five touchdowns and no interceptions. He connected for TD tosses with three different receivers. Young also posted impressive numbers in the Norse’s season-opening loss to Muskegon Catholic Central, going 25-of-35 for 278 yards with two TDs and one pick.