The poll will stay open until noon on Friday, Oct. 21. 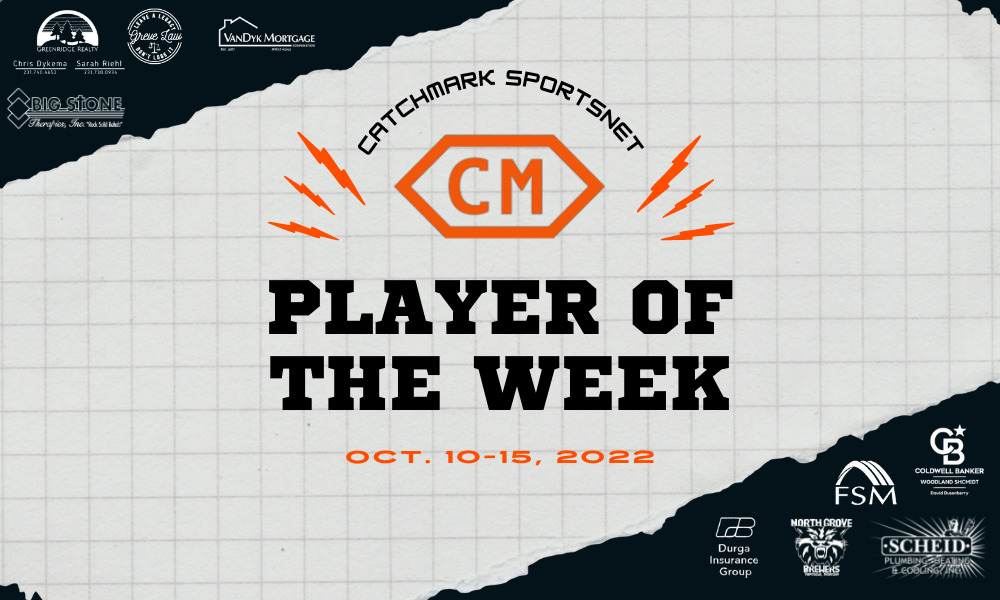 This is the eighth edition of the CatchMark SportsNet Player of the Week fan poll for the 2022 fall sports season.

Time to recognize the next batch of nominees based upon athletic events in the West Michigan Conference spanning Oct. 10-15.

The poll can be found at the bottom of this story after brief capsules on the six nominees. Voting is open and will continue until noon on Friday, Oct. 21.

LAURA BORRAS, Montague volleyball: The senior, who is an exchange student from Spain, helped the Wildcats reach the finals of the Greater Muskegon Athletic Association tournament Saturday at Reeths-Puffer. In three GMAA matches, the outside hitter totaled 37 kills, 24 digs, three blocks and two aces. In a sweep of Oakridge on Tuesday, Borras had seven kills, 11 digs and an ace.

ISAIAH DAVIS, Manistee football: The junior was a difference-maker on both sides of the ball in the Chippewas’ 50-20 rainy rout of visiting Montague on Friday. Davis dominated on the defensive side of the ball with nine tackles, including a sack, plus two forced fumbles and an interception. On offense, he ran 14 times for 83 yards to contribute to Manistee’s powerful ground attack.

MACKENZIE GOUDREAU, Montague golf: The junior was one of two Wildcats golfers to place in the top five individually at the Division 4 state finals Friday and Saturday at The Meadows on the campus of Grand Valley State University. Goudreau placed fourth by shooting 80 on Friday and 79 on Saturday for a two-day total of 159.

NATALIE KELLOGG, Montague golf: The senior was the other Wildcat golfer to place in the top five individually at the Division 4 state finals Friday and Saturday at The Meadows on the campus of Grand Valley State University. Kellogg finished fifth by shooting 80 on Friday and 82 on Saturday for a two-day total of 162.

GUILLERMO ORTEGA, Hart soccer: The senior midfielder had a pair of four-goal games last week, including in an 8-0 district-opening victory over Newaygo Thursday. Ortega added a pair of assists in the win over Newaygo. He also scored four goals in a 6-0 nonconference victory over Muskegon last Monday. Additionally, Ortega serves as a kicker and punter for Hart’s football team.

ANDRE RICHMOND, Whitehall cross country: The senior broke his own school record for the second time in as many weeks. Richmond turned in a personal-best time of 15:48.20 en route to a runner-up individual finish in the Greater Muskegon Athletic Association race Saturday at University Park Golf Course. He led Whitehall to a second-straight team title in the event.