The poll will stay open until noon on Friday, Oct. 28. 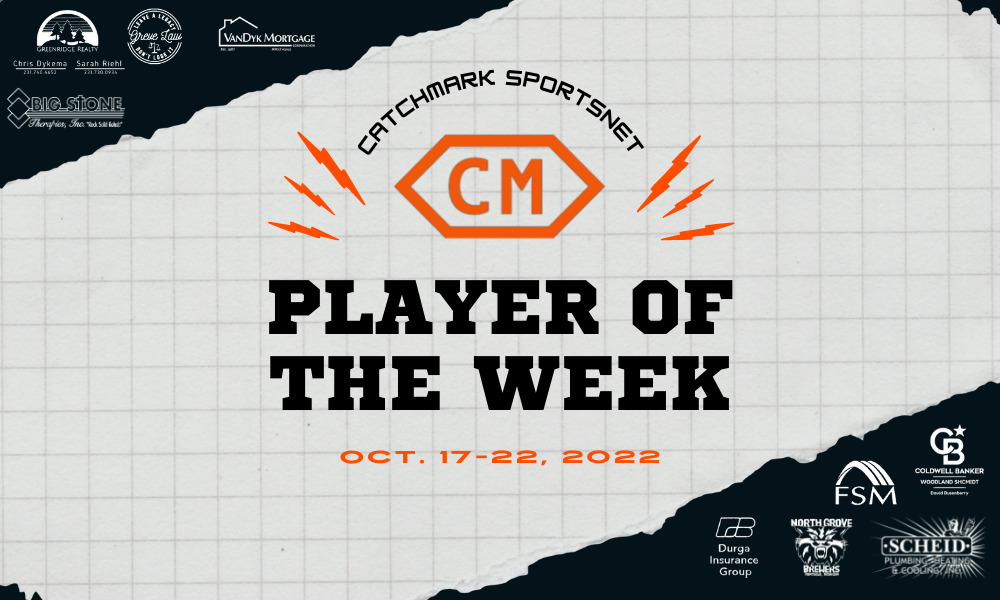 It’s the ninth edition of the CatchMark SportsNet Player of the Week fan poll for 2022 fall sports in the West Michigan Conference.

Let’s recognize the latest batch of nominees based upon athletic events in the conference spanning Oct. 17-22.

The poll can be found at the bottom of this story after brief capsules on the six nominees. Voting is open and will continue until noon on Friday, Oct. 28.

The Pirates senior added two more first-place finishes to his banner season. In the Mel Hall Invitational Saturday at Spring Lake, Ackley crossed the line first with a time of 16:27.81. On Tuesday, he edged Whitehall’s Andre Richmond for first place at the West Michigan Conference Mega Jamboree at Fremont Middle School with a time of 17:28.3 in challenging conditions – 37 degrees, rainy and windy.

The 6-foot-2 sophomore outside hitter helped power the Tigers to the outright West Michigan Conference Rivers Division championship as they captured the tournament title Saturday at Hesperia. It’s the first time since 1999 that Shelby has won a WMC title. Gauthier finished the day with 29 kills, 20 digs, 20 service points and eight aces as the Tigers defeated Hesperia (25-17, 25-13) and North Muskegon (25-12, 25-23). Shelby enters this week with a 27-7-2 overall record.

The Bulldogs’ senior quarterback/free safety/kicker/punter/return man did it all again during his final game at Citizens’ Field, a 48-0 victory over Hart on Friday. Hogan completed 6 of 8 passes for 106 yards with four touchdowns, plus he rushed 13 times for 111 yards and another TD. On defense, he notched three interceptions and made 4.5 tackles. On special teams, he booted four PATs.

The Pirates sophomore continued her fantastic season by easily winning the West Michigan Conference Mega Jamboree Tuesday at Fremont Middle School with a time of 18:41.06 in very tough conditions – 37 degrees, rainy and windy. Jazwinski followed that up with another first-place finish at the Mel Hall Invitational in Spring Lake on Saturday, coming in at 18:00.67.

The Eagles junior standout and school record-holder for single-season goal-scoring heated up again in leading his team to a Division 3 district title. Romero netted a hat trick with an assist in Wednesday’s 6-2 district semifinal win over Orchard View, then he had two goals and an assist in Saturday’s 4-1 district finals win over Grand Rapids West Catholic.