The poll will stay open until noon on Friday, Oct. 14. 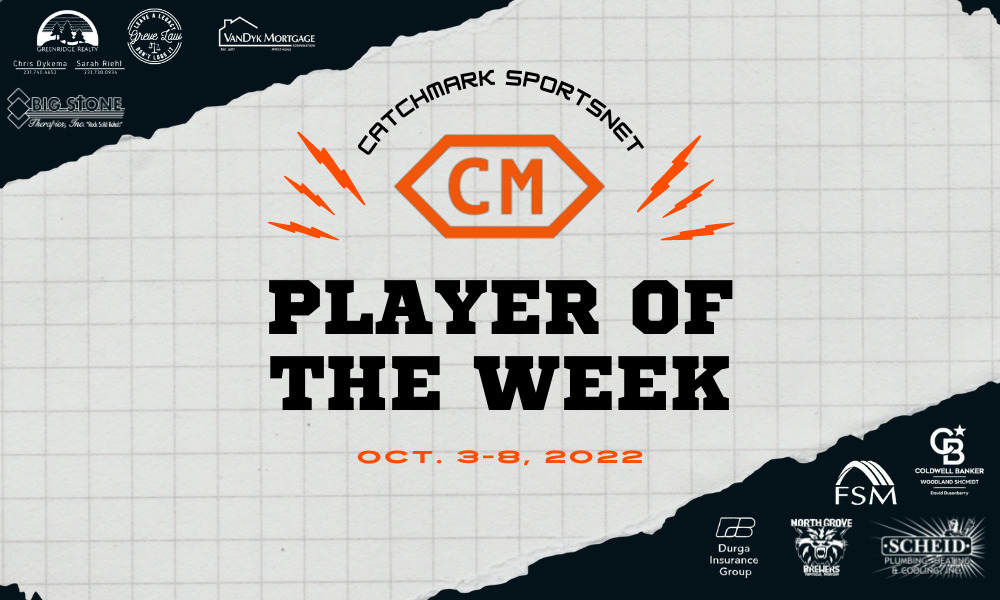 The 2022 fall sports season is moving right long. Time for the seventh edition of the CatchMark SportsNet Player of the Week fan poll.

It’s time to recognize the next batch of nominees based upon athletic events in the West Michigan Conference spanning Oct. 3-8, 2022.

The poll can be found at the bottom of this story after brief capsules on the six nominees. Voting is open and will continue until noon on Friday, Oct. 14.

The 5-foot-10 sophomore was a consistent force for the Pirates as they earned a pair of victories last week. In a West Michigan Conference Rivers Division sweep of Ravenna on Tuesday, Hovey totaled seven kills, three blocks, two aces and one dig. In Thursday’s four-set, nonleague win over White Cloud, she had 12 kills, four blocks and two digs. Hart entered this week with a 20-4-4 overall record.

The Orioles’ junior No. 1 player built on an already strong season by earning medalist honors in the Division 3 regional last Wednesday at Ferris State University’s Katke Golf Course. McKinley fired a 4-over 76 to win medalist honors and beat the runner-up finisher by five shots. She also was the West Michigan Conference’s top player this season, leading Ludington to the league title and state finals berth.

The 5-foot-11, 170-pound sophomore made plays on both sides of the ball in the Spartans’ 50-0 homecoming victory over Hesperia on Friday. Merz rushed for a game-high 125 yards and three touchdowns on 12 carries. He also had an interception and a fumble recovery on defense as Mason County Central limited Hesperia to 76 yards of total offense.

Richmond was one of two Whitehall seniors to eclipse the school record during Saturday’s Portage Invitational on Saturday. He finished in 16:02.1 to place 11th individually in the Division 2 race, while teammate Carter McIlroy was 18th (16:07.1). Both runners beat the mark of 16:09.1 established by Greg Madendorp in 2010. Richmond’s previous best time was 16:37.0 at the MSU Spartan Invitational three weeks earlier.

The 5-foot-8, 165-pound junior ran for three touchdowns and passed for three more, all in the first half, as the Vikings cruised to a 56-6 homecoming victory over Ludington on Friday. Stratton rushed five times for 81 yards and he completed 7 of 11 passes for 109 yards as Whitehall stayed perfect on the season at 7-0.

The 5-foot-6 senior sparked the Tigers to a four-set victory at North Muskegon last Tuesday and she’s been a key to her team posting a 23-7-2 overall record entering this week’s action. A four-year starter at libero, Weirich totaled 25 digs, five aces and three assists in the win over North Muskegon. In the Wayland Invitational Saturday, she notched 51 digs, 13 assists and seven aces as Shelby went 1-1-1 on the day.