The poll will remain open until noon on Friday, Sept. 30. 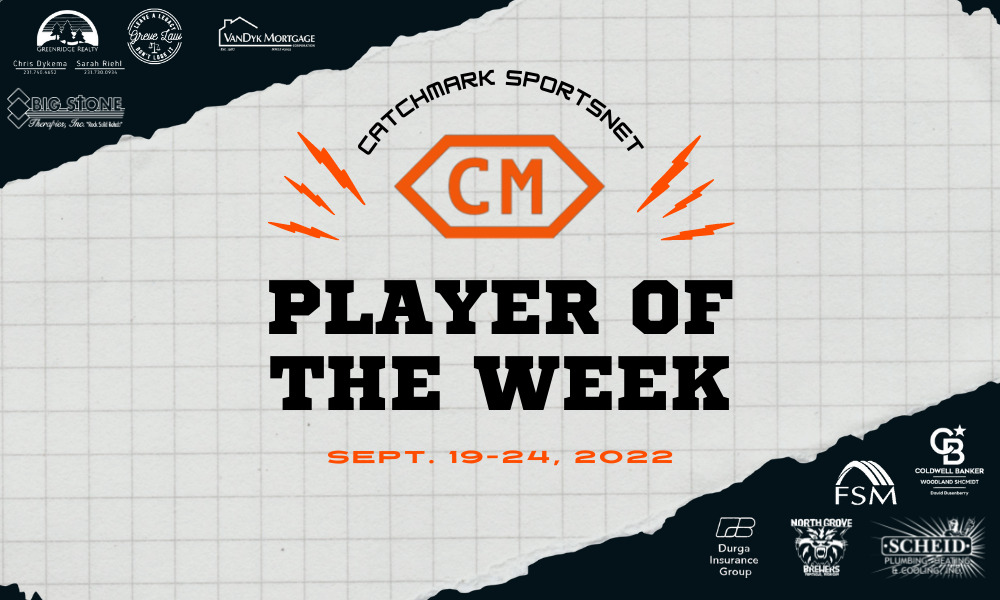 The fifth edition of the 2022 CatchMark SportsNet Player of the Week series is here.

Voting participation has been outstanding in our Player of the Week fan polls and we thank our readers for that. In each of the last two weeks, totals have surpassed 30,000 votes.

Now, it’s time to recognize the next batch of nominees, based upon athletic events spanning Sept. 19-24, 2022.

The poll can be found at the bottom of this story after brief capsules on the six nominees. Voting is open and will continue until noon on Friday, Sept. 30.

The 6-foot-1, 175-pound junior quarterback was a running and passing threat for Shelby on Friday (Sept. 23), as the Tigers snapped their program’s 21-game losing streak with a 22-16 overtime victory at Hesperia. Garcia rushed 22 times for 105 yards and two touchdowns, plus he completed 8 of 9 passes for 102 yards and another score.

The 6-foot-2 sophomore outside hitter reached 1,000 career kills during the Tigers’ sweep of visiting Ravenna on Tuesday (Sept. 20). Gauthier finished the night with 23 kills, 12 digs and four aces as Shelby defeated Ravenna, 25-19, 25-17, 25-16, in a West Michigan Conference Rivers Division matchup. That night, Shelby and Ravenna worked together for a suicide awareness campaign and the teams posed for a group photo together wearing special T-shirts for the cause.

The junior broke her own school record by shooting a 3-over 75 as the Wildcats won their third straight Greater Muskegon Athletic Association tournament title Wednesday (Sept. 21) at Stonegate Golf Club in Twin Lake. Goudreau earned medalist honors and her team shot a season-low score of 361. She broke the record she had set last September at Old Channel Trail, where she carded a 77. Goudreau is a two-time all-state recipient. Montague is seeking a third-straight Division 4 state title.`

The junior had a big week for the Orioles, who continued to roll and picked up their seventh straight win in an impressive 3-0 win at Allendale Saturday. In that game, Holmes netted a pair of first-half goals to put Ludington in a good position. Two days earlier, in a 3-0 victory at Oakridge, Holmes scored a goal and notched an assist. Ludington enters this week with a 13-1-1 week and No. 13 ranking in the Michigan High School Soccer Coaches Association Division 2 poll.

The 5-foot-10 middle hitter/outside hitter enjoyed a productive week for the Wildcats, who defeated rival Whitehall on Tuesday (Sept. 20) and won two of three matches in their home invite on Saturday (Sept. 24). In the win over Whitehall, Trevino had 11 kills and two blocks. During Saturday’s Montague Invite, the Wildcats lost a tight match against Spring Lake and rolled past Holton and Pentwater. On the day, Trevino totaled 30 kills, seven blocks and two digs.